@edicted was the account which gained in the rich-list the most. It jumped 17 positions in one week. There were two new accounts @teapassion and @anadolu which entered in the rich-list. In another development @amr008.pob account lost its 3rd position to @richardcrill. Summary of the Rich-list Changes

We are not yet able to replace @null from the richlist.

Last week when I posted the statistics, there were 992597 POB tokens staked in the #pob power. Out of these 691898 POB power was staked in these 50 accounts.

However, another interesting fact about the rich-list is that there are four accounts which are not staking any power but are in this list due to the delegations they have received.

How much POB Power you need ?

In order to be featured in this publication, you need atleast 3313 POB power staked. This amount keeps changing every week, last week it was 3250.

This indicates that the competition to get in the rich list has increased further.

@interpretation! I sent you a slice of $PIZZA on behalf of @gillianpearce.

I had a setback due to having to fund @memehive using POB. I should be back on track now and I'll be working my way back up the list again.😁

That is great to know. You have already jumped 5 positions in the rich-list.

Good day boss is a great one have you back on the track,from the list so far u have increased from the position to high position which I believe you can do more by his grace.tanks

Wow, this is getting really interesting and exciting. It's a good response, kudos to all Top Stakers. We are really building into a powerful and prosperous community now. Go POB Go 😊👍

Yeah ! We all are building a really powerful community now. The rich-list is becoming stronger. Every week there are new entries, at least one or two new accounts get into the rich-list and eliminate the established few from the list. This is a very interesting movement.

I felt so happy seeing my boss in number ten, which I strongly believe you will become number 1.pls recommend them in such a way you be Sale and gain more money .

I'm not sure if you know this, but it's unlikely the @null account will ever leave the richlist, since not only tokens paid for promoted posts end there, but also all burned tokens go to null. For more accuracy, you might as well not count @null as a "real" account because it effectively isn't.

From my reply to @frot, down below:

On Hive proper there's an automated mechanism that "sweeps" the burned Hive tokens from the @null account every minute or two so there's never a balance. Layer 2 (Hive-Engine) tokens are not swept so the account effectively holds HUGE balances of every Hive-Engine token ever issued that has burned tokens and continues to burn tokens. That's continue to build if/till the base code is modified.

Regardless, I still have a long ways to go to make the top-50!

I don’t know if I am ever going to make this list, looks a little difficult honestly.

But it feels great to read the list, know a lot of people from this list and the fact that people from the list acknowledge my work here on pob.

I always read your posts and mostly I like to read more about India. It is emerging as the strong ally for the European countries and US in the geo-political situation in Afganisthan.

Oh wow that’s great to know that you read my post.

Yes, the situation is really bad in Afghanistan right now, have you seen that video where people are literally falling off a flying plane that was travelling to US because they wanted to just leave Afghanistan.

Yes I do read the posts and whenever possible, I try to give 100% votes on many of your posts.

Yesterday it was viral on various social media for the whole day. What do you think is the impact of these developments on your country ? Do you think Taliban would damage the financial interests of India ? There were many Indian businesses, which made random investments in Afghanistan, I believe.

I wish you all the best and by his grace you will continue to excel in the list also each ad everyone of us will get there too.

The good people of this community we be great for this.

Ah, a stalker 😂
Where do you find this information? @null is also the account where "burned" tokens end up... which is why it will probably never exit the top 50 because tokens are burned all the time.

On Hive proper there's an automated mechanism that "sweeps" the burned Hive tokens from the @null account every minute or two so there's never a balance. Layer 2 (Hive-Engine) tokens are not swept so the account effectively holds HUGE balances of every Hive-Engine token ever issued that has burned tokens and continues to burn tokens. That's continue to build if/till the base code is modified.

I do find myself wondering whether this constant clearing actually adjusts the total pool of Hive tokens on a "live" basis... or do they actually "go" somewhere. 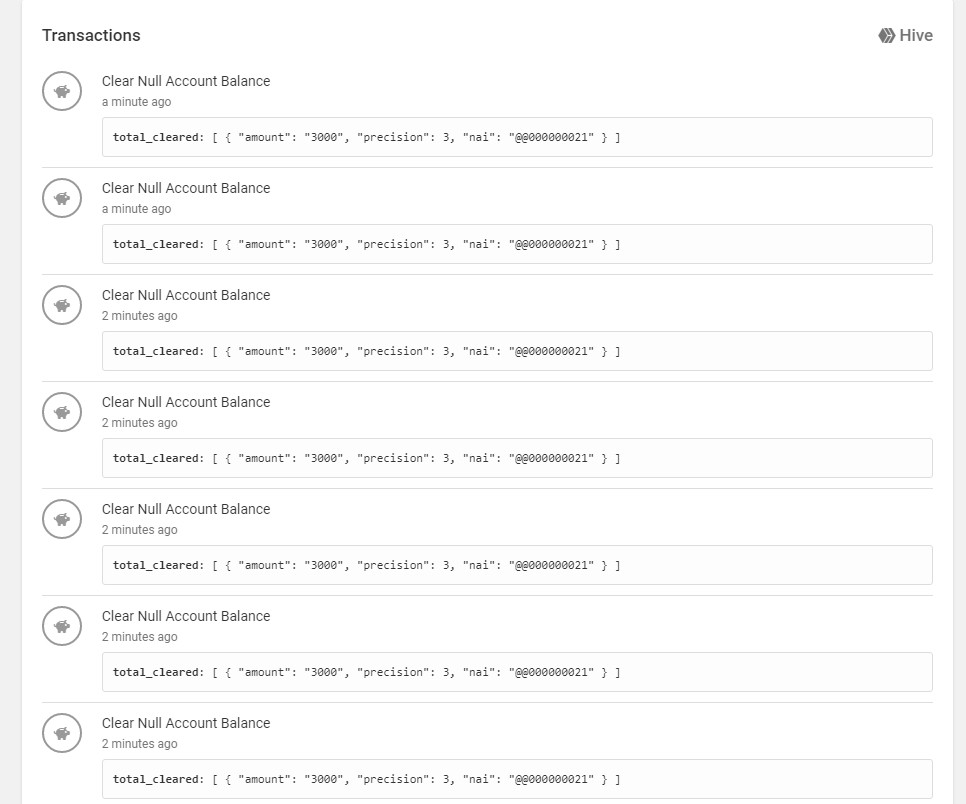 I think as the days pass by the inflation rate would adjust and for the stake you have the vote value will go on reducing. This will also impact the rewards from engagement projects as well. However, looking at the tokenomics of other comparable tokens, even the adjusted rewards look great.

It's a long haul for me. I will be buying powering up staying and staying active. Hopefully someday I will see my name here. For now I'm far from it.

Uhhh!! What a great achievement. One day , I will join the POB rich list

Yes ooh I luv the spirit,also by his grace I wl be among too the achievement as ma ma we.

Congratulations @interpretation! You have completed the following achievement on the Hive blockchain and have been rewarded with new badge(s) :

It's a long haul for me. I will be buying powering up staying and staying active. Hopefully someday I will see my name here. For now I'm far from it.