NFT art and it's pragmatic value and what to watch for

If you keep up on blockchain news, you've no doubt been seeing the rise of NFTart. Which in simplest terms is a piece of art minted/attached/integrated into a blockchain, to exist and have it's ownership witnessed to there.

Why the arts have value at all is a subject that I am very sure I can make interesting, even if you haven't given much of a damn about art before ...BUT... to make sure I have your attention...let's touch on how the rise of NFT art is a boost ( $$$$ ) and has pragmatic ( $$$$ ) value to everyone who owns crypto...

You've heard of the rule of "supply and demand". Crypto rises when the demand goes up. The biggest potential for the biggest rise in it's value is the untapped demand from regular type people, who have not yet looked into owning any at all.

Who out there has the largest reach, voice, connection to, and appreciation of these regular types? Crypto bloggers? Financial advisors? ...OR...creative professionals?

Obviously it's the latter.

They (we) have more followers, get more attention, get more interaction than all of those others combined...several orders of magnitude more. A tidal wave's worth of more. It's objectively provable indisputable. and so with the rise of this new outlet "NFTart"...having scores of creative types posting about blockchain tech and crypto currency is...well...extremely valuable to everyone who investing in crypto.

You want to put it into advertising terms...this would be ten of millions of dollars just in the man hours it would take to preform the due dillegance of finding the worthwhile creatives, and getting them all on the same page...at once...with the same message. Tack onto that the money it would cost to pay them all for the endorsements.

There are literally millions of people hearing about blockchain and seeing it being used for something they can get their heads around from these creatives. and they are seeing that the creatives are taking crypto as payment and thus...must be also be spending it one something. They are learning about it and seeing that - yes...this is in fact actual money.

That makes this NFTart world a pretty damn valuable movement for every single crypto investor.

Now that I have your attention...let's talk about the innovation here at it's base, and why it will in fact hang around. There are a lot of projects being attached to blockchains and many,if not most of them, are what you'd call " a solution in search of a problem". NFTart however is a solution to an actual problem, that is actually changing the world of art...possibly forever. We are witnessing ( and some of us participating in, via making or investing)art history in real time.

The term "traditional art" exists because so many artists are now using digital tools to create. and than means the finished piece is also digital. Sometimes with sound attached, with movement or changes in color and tone...art is no longer only a static image on a canvas or print or chiseled into stone. The tech and tools have gone beyond that, and amazing, beautiful, innovative works were being made...with no real way to monetize them..

Let me explain something about art...it takes skill. Skill takes time to be developed and innovations happen after hours of trial and error. If you are not being paid...you have to make money elsewhere and so have less time to develop those skill and hammer out those innovations.

So... up until recently...digital art types could only devote a limited time to what is in fact a brand new medium. Now however, they can get paid and so can devote more time to creating and innovating and developing skills and developing the entire concept and medium of NFTart.

Consider all the talent and innovation out there, and all the tools that exist and have ever existed...now ALL able to create whatever they can come up with or wish to put into existence and the only limit is the amount of data they can use. Their canvas is a computer screen and ANYTHING they can produce onto it.

This IS history, right in front of us.

How much do you think the fist fours years worth of paintings on cave walls that man kind ever scribbled is worth right now? The first stone sculptures? The first renaissance paintings? The first photographs ever taken? The first recorded music? NOW think about how valuable the BEST of the early works in those mediums is.

NFTart is rising fast because more and more people are realizing just what is going on in front of them.

As for that first wonderment of why art is valuable at all. It's because "human joy is precious". The richest people in the world spend the most on art because they have enough wealth to understand that preciousness in possibly very bleak, tragic figure, poignant way. A song, or an illustration, or painting or book that can invoke any emotion, make any human connection, take your mind and heart somewhere else...well...life being short and fraught with drama, that may well be among the most valuable things anyone can own.

In Citizen King one of the richest most powerful men on earth died and his last word was "rosebud". Rosebud was a sled was a sled he had as a kid. I old broken nigh worthless object that reminded him of the joy of childhood. It is considered one of the greatest movies ever made, and in no small part to the poignant message that connected with so many people.

I trust I've made my point as far as that goes...

SO...let's say you want to start collecting some of this NFTart. What the hell do you look for?

Whether you are looking for human joy or an investment...the answer is the same, and it is two fold. First and most importantly....look for something you think is good. Go with your gut, simple as that. Let me explain why that'll work as good as anything-

I have been a professional illustrator for many years. I know a hell of a lot about composition, color theory, emotional connections to shapes, lines, color pallets. I would guess that I know a lot more than you. Let's say I look and a Da Vinci painting...I would, with my wealth of knowledge, call it a masterpiece. YOU, with no such wealth of knowledge would look at it and call it...a masterpiece. If you and I both come to the same obvious conclusion when looking at a piece of art, what actual pragmatic difference is there between me and my knowledge and you and your gut reaction?

Not a hell of a lot.

It is the work, not the spectator, that makes it great, good, or awful. People often point at "modern art" and say they don't get it. And in that sense they miss the point...don't think you have to understand why you like it. You don't. You can look at a painting by rothchild and simply accept that it speaks to you, takes you somewhere, but you don't know why and don't care why. Simple...don't overthink it. If you see something that speaks to you, it is no doubt having that same affect on others and worth owning. Trust me on this...having a work make an emotional connection to others is not fucking easy. and however it is accomplished whether splotches of paint or meticulous water-coloring, it is a rare and valuable thing.

OR... if you prefer something more grounded and literal and founded in masterful technique...nothing wrong with that. Get whatever speaks to you.

I would add ONE piece of actual advice, in which my experience and knowledge will be useful- look for the innovators

This is a new medium, the possibilities are nigh endless. Look for the creatives that are experimenting, advancing, adapting, merging learned techniques into the new, creating new techniques altogether, making use of the advantages of this new medium in some way.

You can already see the evolution and advancement going on. Just a year ago NFTart was full of hastily minted static images and glorified screen savers, nothing wrong with that, that'd be the single celled organisms growing a tail to wiggle around with, you need that before you've got mammals walking around on land. Now, already, NFTart is full of genuine advancements and people learning understanding and making pieces that truly take advantage of the creative possibilities. That's the ones ya wanna keep an eye on, and start owning work of.

That might be a bit vague eh? Let me give you two examples of what I mean...and what I am about to do here...is going to keep me up at night. It's sending a cold chill up my spine just thinking about it. I'm...I'm going to show you someone else's work (deep breath), only to demonstrate innovation without it seeming like this whole thing was written to plug my own stuff.

These are work's of Javier Arres. The innovation of the first is fairly obvious. This is a work that simply could not exist anywhere else. What the hell actually is it? It's not a painting/illustration...it doesn't really tell a story or set a mood per say. It's not exactly a scene and it's not exactly an object. It's somewhere in the middle of alla that.

This second piece of his, tales advantage of the medium in a different way. This could not be as effective in print or as a painting...because only as a digital work could you zoom in and absorb every little detail. 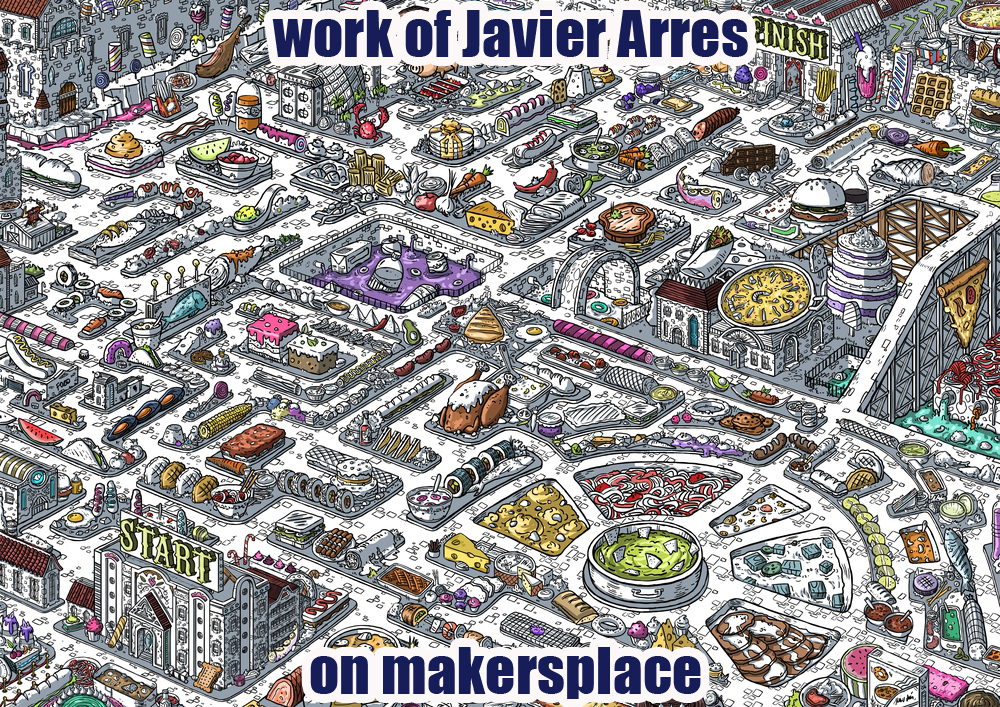 So, that's just a couple of examples of what I mean by innovation or making full use of the new medium. For more of his work go here-
-https://makersplace.com/arseniclullaby/

NO...don't...that was a dirty trick, that was a link to MY work. I apologize.

Anyways. What I've said here should help you get your head around what all this is about and perhaps gave you a little more insight if you where already well versed in the NFT art world.

My NFT art can be found here - https://makersplace.com/arseniclullaby/

behind the scenes pics of it being made can be found here-- http://arseniclullabies.com/nft.html

as always my homebase is here http://arseniclullabies.com

and just for the hell of it...I'm on alla these also ( though I don't even know what half of them are)

For those who want to know, you said it all.
Great article, not blog, this is real great article about #nft but art also. And hell yes I go with that if you watch and want to buy, go with your guts.
''If you and I both come to the same obvious conclusion when looking at a piece of art, what actual pragmatic difference is there between me and my knowledge and you and your gut reaction?''
100%