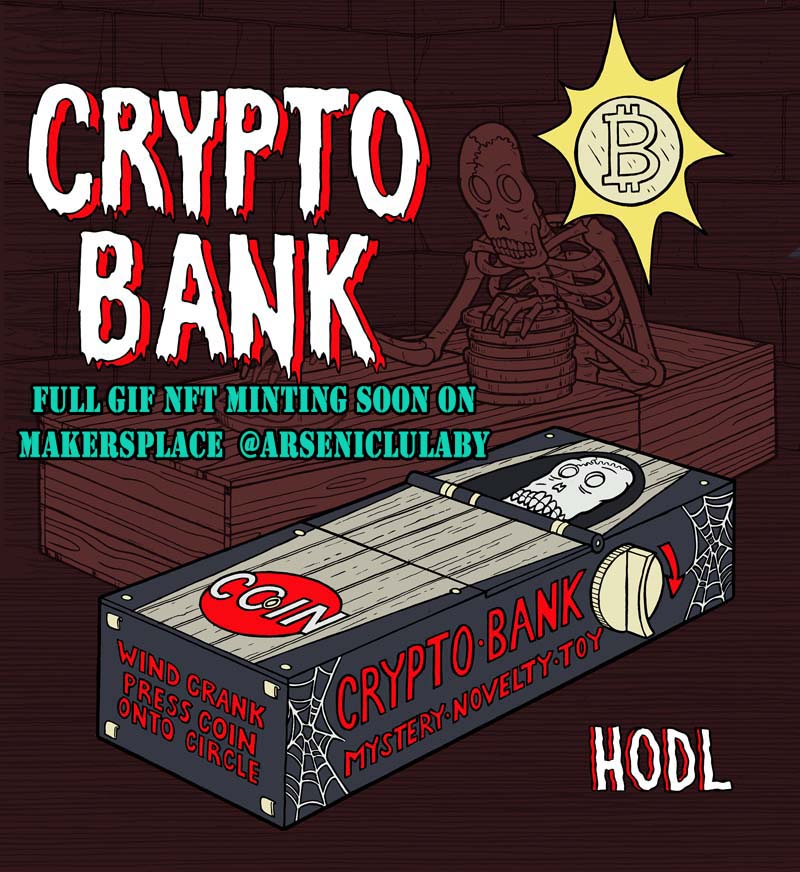 UPDATE, THE FINALE PIECE IS NOW AVAILABLE AS A 1 OF 1. LINKED BELOW
https://makersplace.com/arseniclullaby/crypto-bank-1-of-1-46188/

This is a piece where the concept was straight forward and fun, and I could try out some stuff...test my abilities a bit in this new NFTart medium. Which, as always, means overthinking something that should be simple. The core idea is one of these novelty banks. 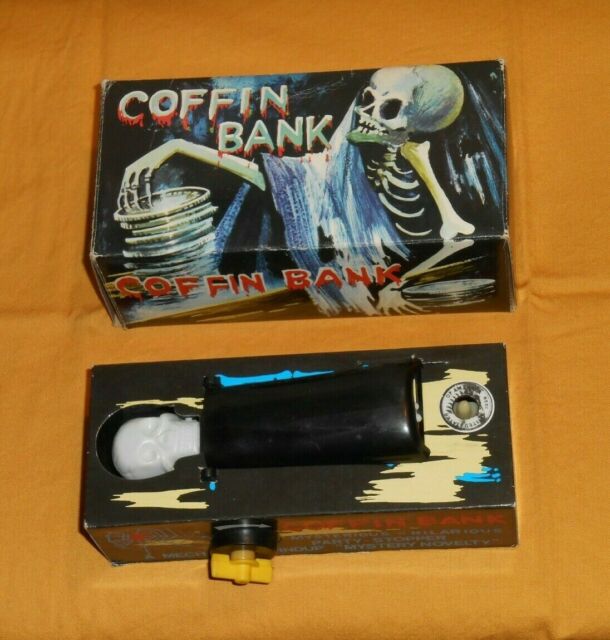 I never had one...I vaguely remember someone I know having one when I was a kid, maybe my uncle. I always thought they were cool. You stick a coin on the tab, a little skeleton head pops up, a bony arm ratchets up and grabs it.

For about 10 seconds or so, that was the plan...just the bank, a coin appearing and the animation of the hand taking it. As most of you know by now, I can't bring myself to keeping anything simple...so I decided to have a whole background like it was a magazine add or such with creepy words moving and retro stars popping up and stuff like that.

So first a rough ROUGH sketch of what I want it to look like, so I have some semblance of a plan... 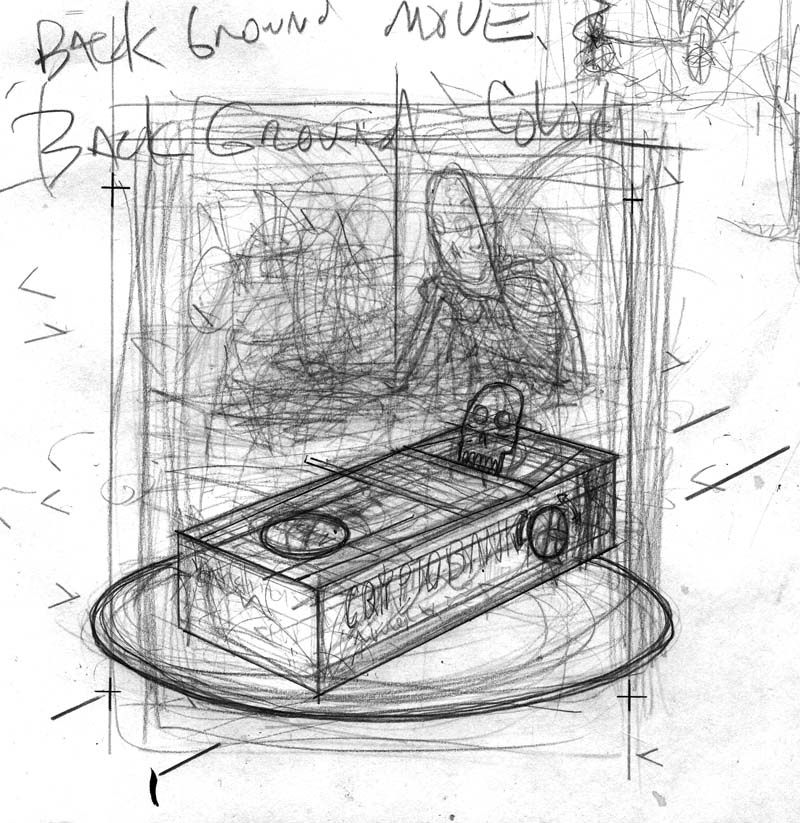 Alright, believe it or not that's a solid plan. Words'll go on the upper left and bottom right. The coin'll start upper right, pop onto the box and...the rest takes care of itself. ..cough...

Illustrating the background and coffin is a straightforward task, you figure out the vanishing points, draw it out, ink the bastards and that much is done... 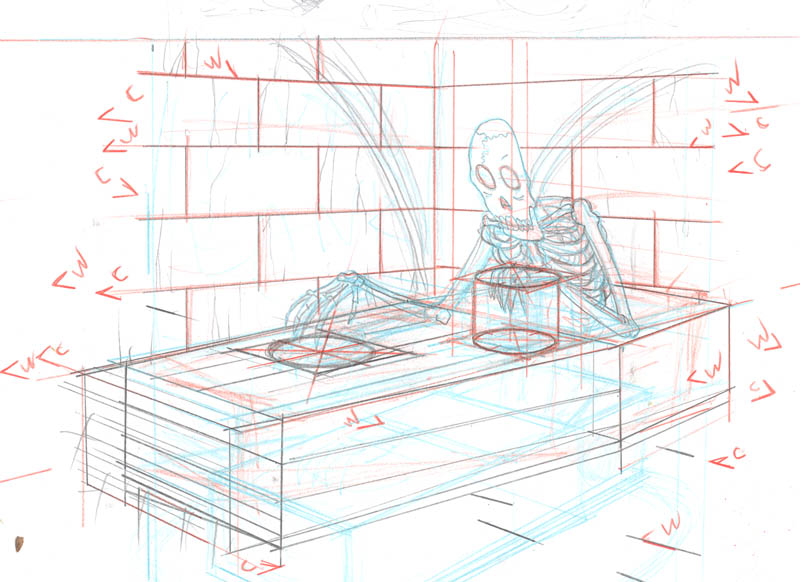 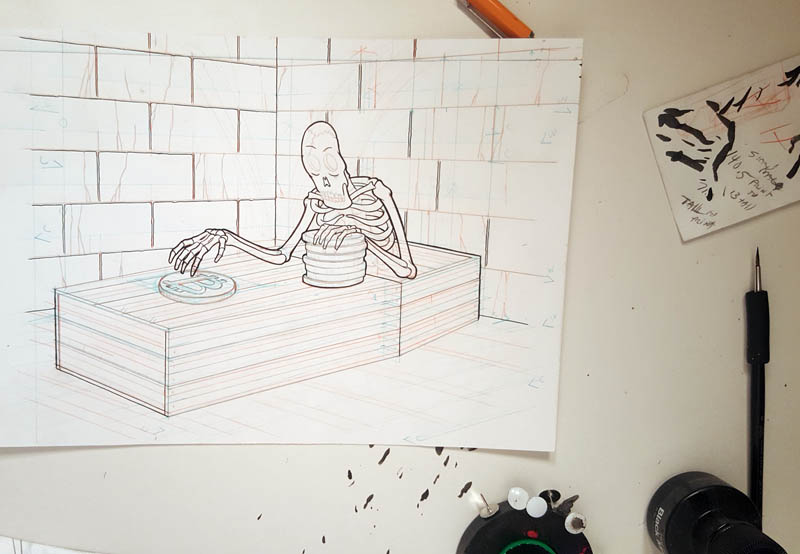 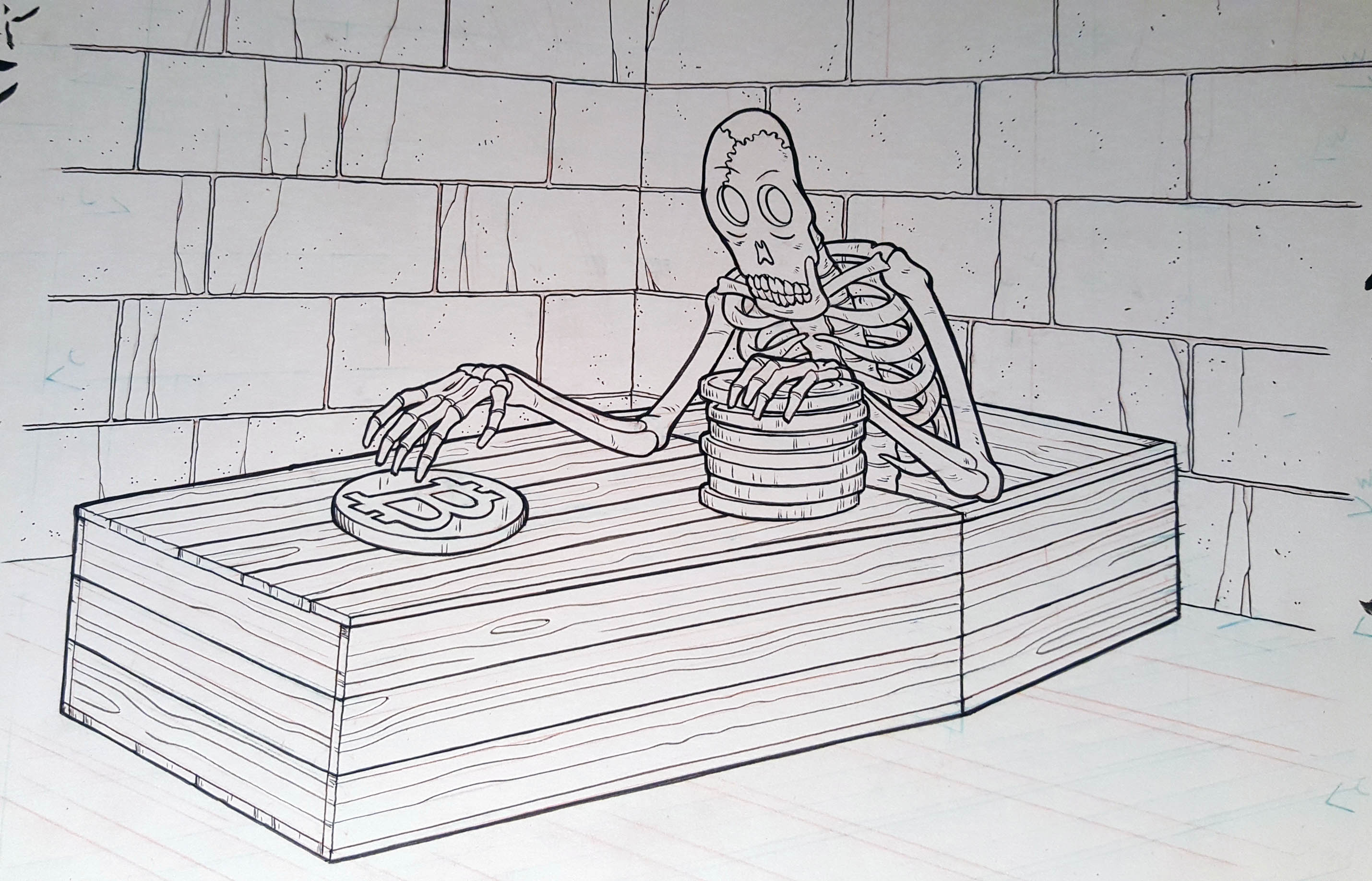 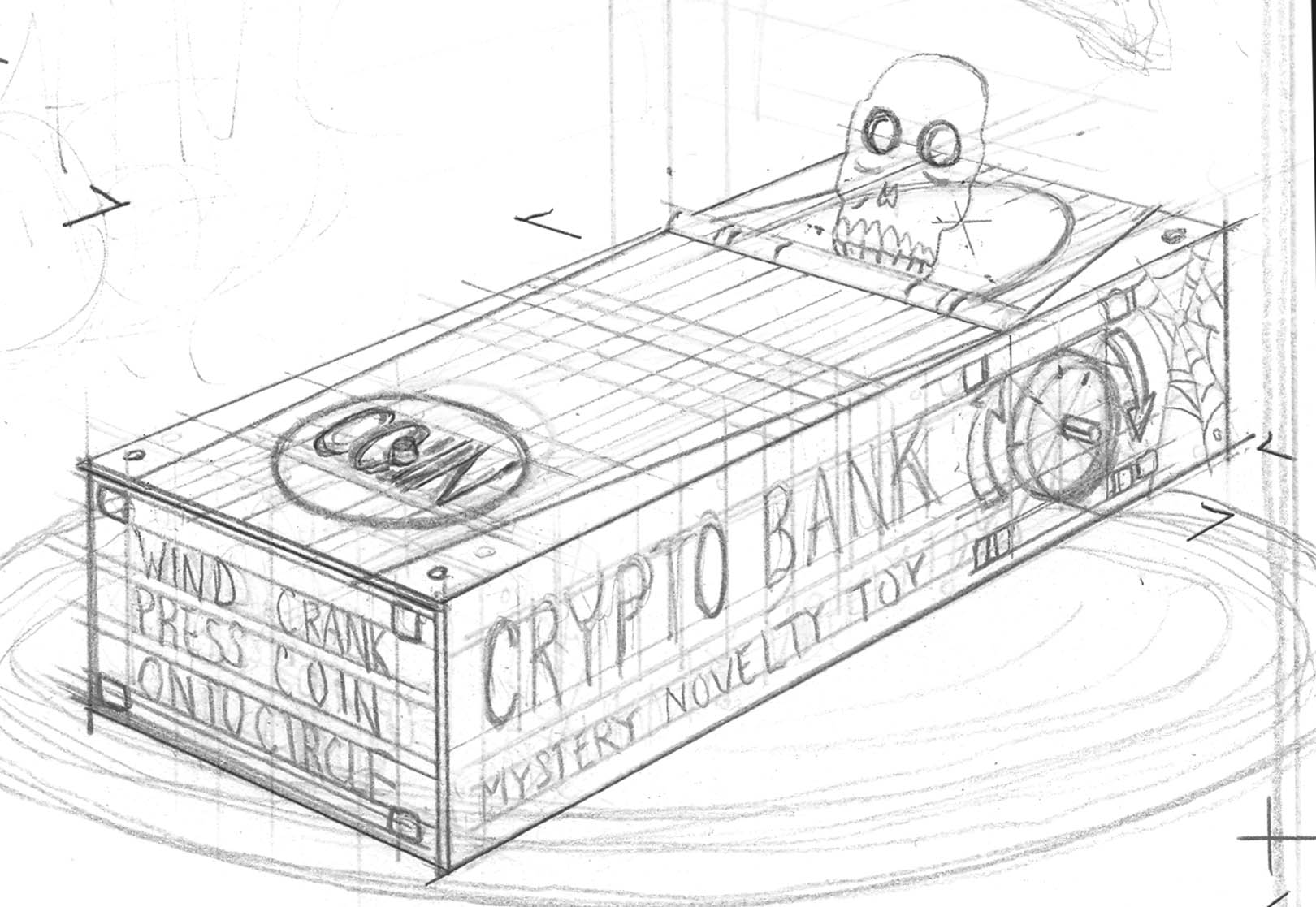 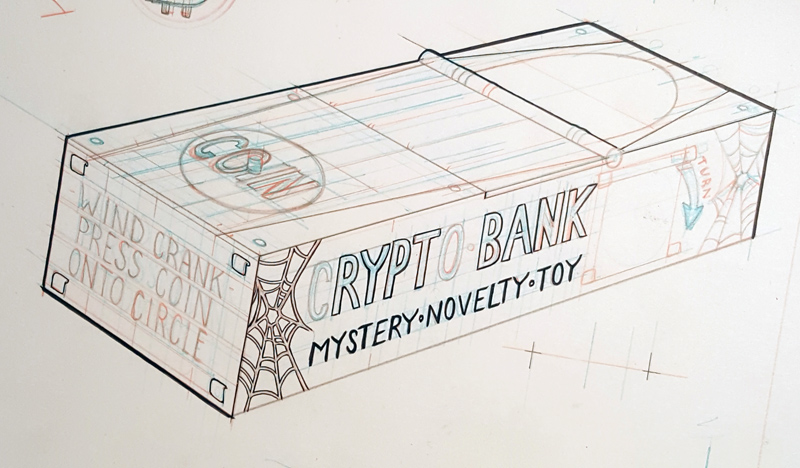 "hey...about you buy a decent camera FFS. We can't see half of the details of that"

Hey...why don't YOU, gimmie a break. I use traditional tools for illustration...pencils, ink, brushes. You actually expect me to have a decent digital camera?! Here...get a load of this...my computer was so fucking slow that I was having to split this simple gif into a beginning, middle and end, just to keep it from freezing up. Finally, I ask my friend over to see if he can do something to help and he opens up the computer and pulls out this-

That was ALL the ram I had. 1GB...that's probably less than a burner flip phone. Which should tell you all you need to know on how muther-fucking-long and aggravating this was becoming. BUT...he put some more ram in there and BOOM! I could actually work on this for more than 20 minutes at a time. I am currently the proud owner of a computer with 8 gb or ram! Hello year 2005!

Anyways...back to inking with a brush. 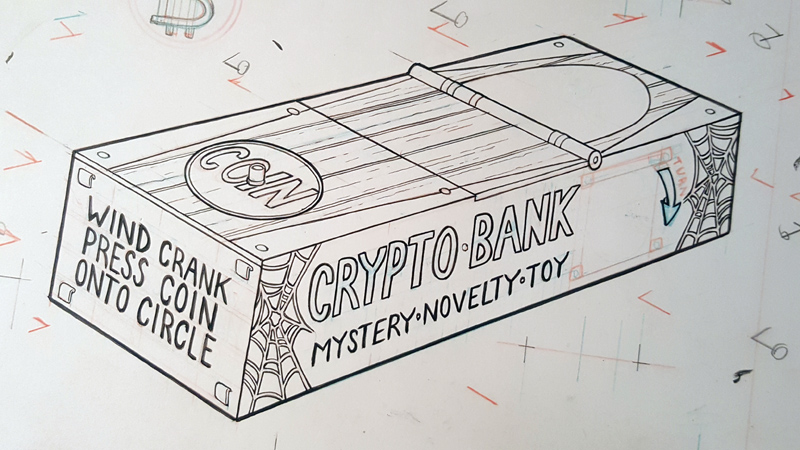 so...now the stuff that has to move. that's all gotta get figured out and illustrated. Stuff like the crank, for example. If I'm working 12 frames per second or so, I decided on 6 different cells for the crank to give it a smooth spin. That's 6 different illustrations just a bit different using the same vanishing points....here's a shot of some of that work... 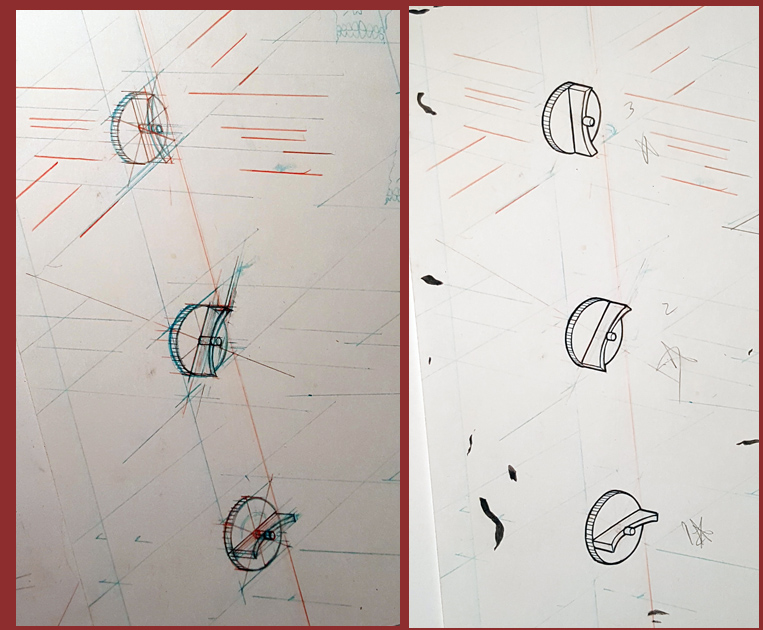 6 cells work pretty good, to give the crank motion.

Using that number for the speed of the crank, I have a ballpark idea of how many cells of each other thing that moves will be appropriate, depending on how fast, slow, sooth or choppy I want it compared to the crank. So...then I just have to draw cells for every other fucking thing that moves...the hatch, the head, the arm, I forget what else... 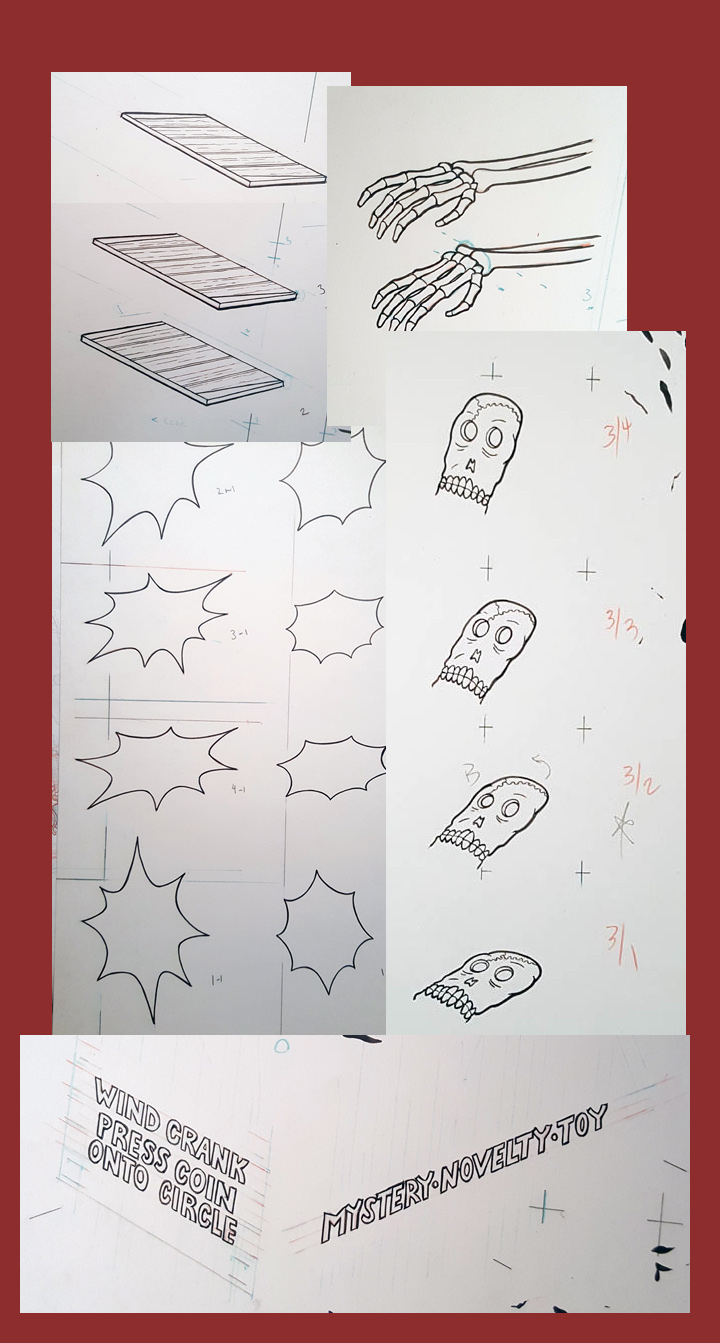 Oh yeah..I redid the words on the coffin itself because...I dunno, I didn't like the first attempt.

Now, once I have all the parts drawn, scanned in and...oh...I almost forgot, the words on the top. "CRYPTO BANK" I wanted something spooky that would sway back and forth. 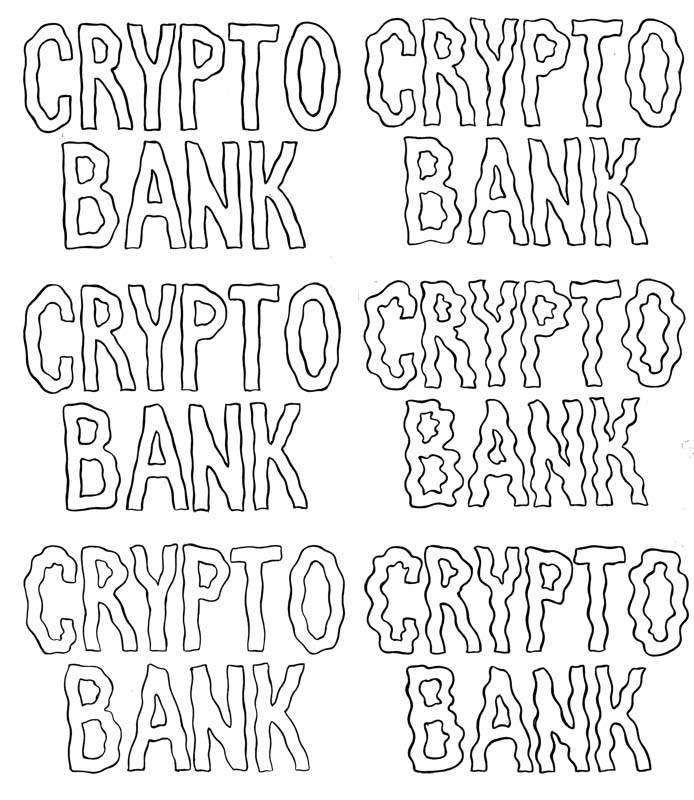 Inking those by hand was actually kind of relaxing.

However, once I put them onto the rest and animated them. They sucked. They looked fine alone, but the the sum is greater than the whole of it's parts, as the saying goes.

I decided to go with something more old school horror, and I am glad I did... 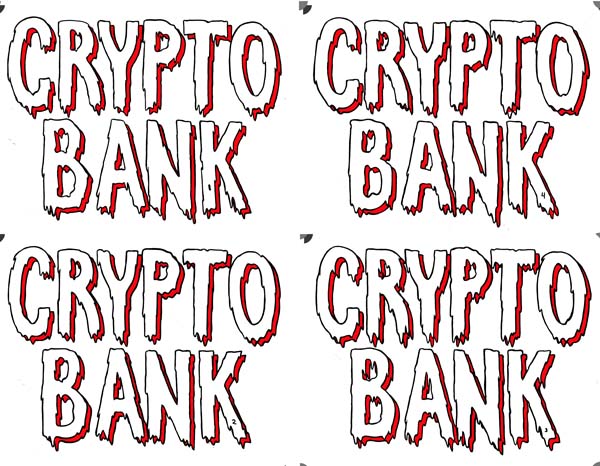 Those are way cooler, and I can do more with the animation of them, as they'd related to the rest of the animation.

Y'see, the thing that I am trying to master, which is unique to this medium...is that many things can be moving at once, and thus they all need work to work together in a way. Relate to each other visually somehow.

A static image is a static image, there are visual techniques that make a compelling composition. A fully animated cartoon moves the viewer along very quickly, there isn't normally more than one or two things moving at once per each camera shot, or it would be visually confusing. BUT...in an NFT the camera shot can remain static and have as many moving elements as you are able to orchestrate.

hmm...I may have swerved into the best way to describe what it feels like working on these. Like you are conducting a little visual orchestra.

Without giving anything away, my strategy is to combine the techniques used in moving the eye around a comic book page, with the motions I am able to add to an NFT. Which is either brilliant or a case of " it the only tool you have is a hammer, everything looks like a nail".

I any case...this NFTart field is the most fun I've had in a long time. I can use all the precision I've learned in traditional illustrating and contrast that with whatever my instincts like best with the movements/rhythm.

UPDATE, THE FINALE PIECE IS NOW AVAILABLE AS A 1 OF 1. LINKED BELOW
https://makersplace.com/arseniclullaby/crypto-bank-1-of-1-46188/

My NFT art can be found here - https://makersplace.com/arseniclullaby/

behind the scenes pics of it being made can be found here-- http://arseniclullabies.com/nft.html

as always my homebase is here http://arseniclullabies.com

Nice! Anything with a skeleton in it is a winner in my book. Great process, too!

Thanks...not that'd I recommend my specific process. I'm sure there is an easier way XD

I hope it sells for a decent price. I hear about NFTs going for crazy money, but you need to find the right buyer. Is the animation process getting any easier? I assume you must pick up on tricks of the trade as you do more. Planning must be important.

? I can't say I've seen any "crazy money" , I've seen a lot of artists getting paid what their work is worth...being that something never created before despit over 6000 years of human culture. That's no small feat

Well this was a nice sale. It's still a new market and people are seeing what works. If more artists can earn from it then it seems to be a good thing.

Excellent work, i congratulate you! Keep going with your projects. Look at the creation of my comic project, I hope you like it.https://ecency.com/hive-152031/@chapath/raxel-apocalyptic-comic-book-story