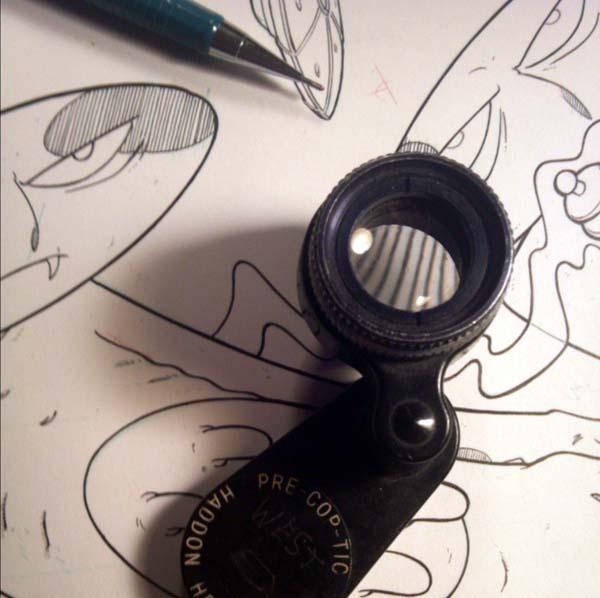 Considering the bulk of my professional time, up until a few months ago, was spent on the comic book industry...which is currently dead in the water (more on that next time), I sure am busy.

Got a fair amount of commission requests once I opened that door ( which is why I don't open it often), I have a project I'm struggling with for a publication in my beloved Greece. And in between all that, I've been trying to put together a Arsenic Lullaby gif to be published as a 1 of 1 NFT on a site called SuperRare. (follow me there if you like-- https://superrare.co/douglaspasz )

I'm not one to leave any stones unturned or avenues left untried. I saw SuperRare has a nice set up, contacted them, talked on the phone for a bit...and they seem pretty sharp. So I've set up my spot there and will be putting up my first NFT art on SuperRare this coming week.

NFT collectors seem to like gifs...and I've done animation before, so that seemed like a good way to go. The plan was/is to take this fine illustration of the Alien Centaurs from my comic Arsenic Lullaby... 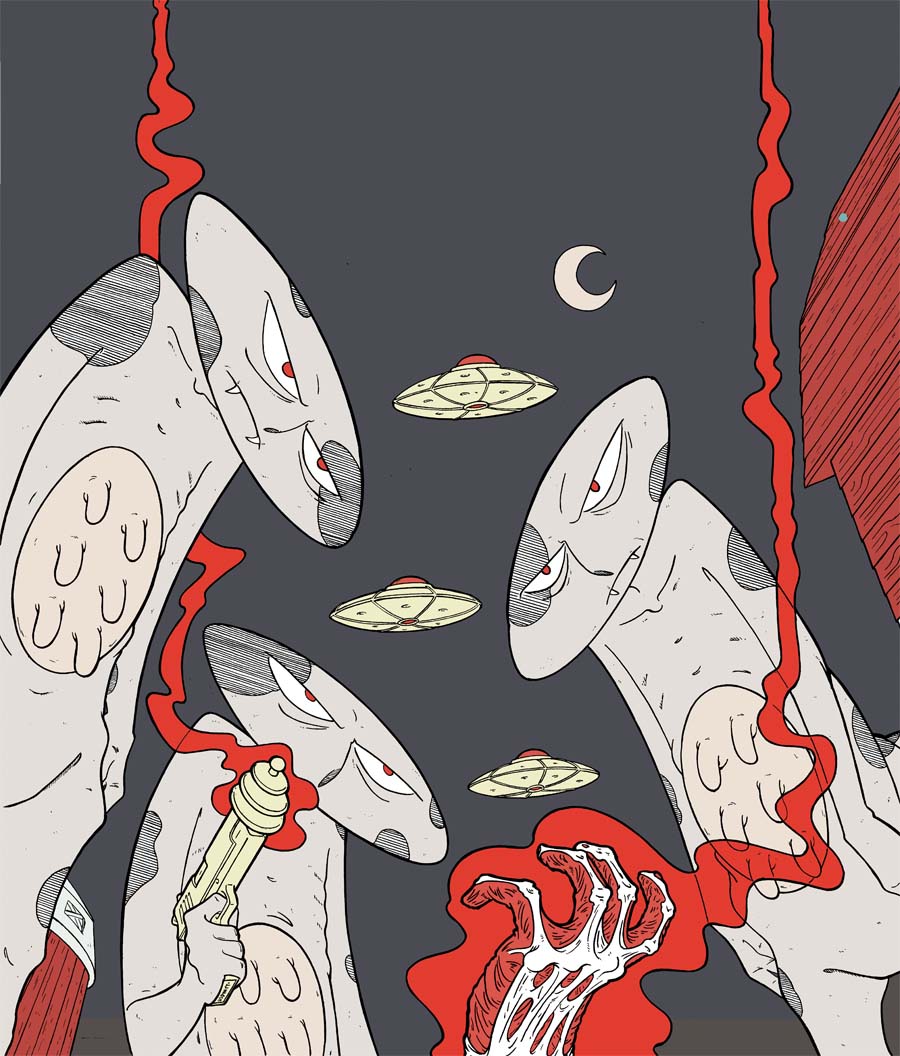 and make it into a simple gif.

With animation...planning is the key. A solid, concise plan is what keeps a 1 day project from becoming a one week project. See, you don't want to just get all excited, grab one simple element (like say a flying saucer) , jack around with it and convince yourself the whole thing is going to go that well...

That's what you DON'T want to do. I can not stress enough, as we go along here, that you should really NOT be doing this the way I did. Because I knocked out that flying saucer, got all excited and any semblance of a plan went right out the window, and I just jumped around from one thing to the next, assuming it would all magically come together.

ALSO...when animating something in 2020 and beyond, there is most certainly a better way of making the individual frames...that THIS- 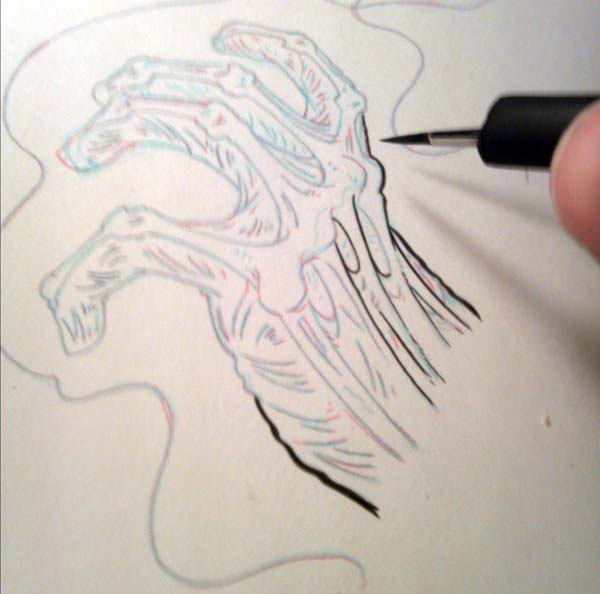 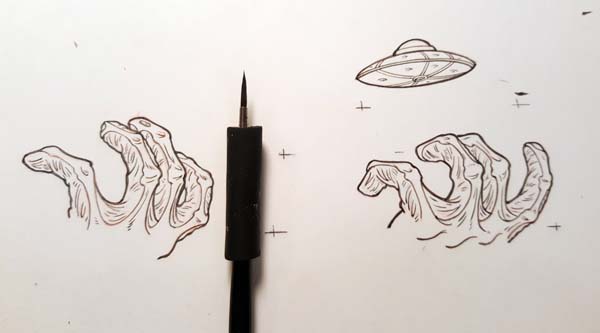 In my defense, that is how I illustrated the original and I didn't what it to be visually inconstant once animated. The workmanship that will give it an old school look is what I'm known for after all...and people do appreciate effort, and it is a striking style in this day and age.

So...inking the cells by hand while inefficient, at least has some merit. Plus, we're not talking about a 22 minute cartoon. I can handle doing a second or two of cells by hand. That's not the idiotic part.

I'll just show some progress pics of the original before we delve into how absurdly I went about making it into a gif... 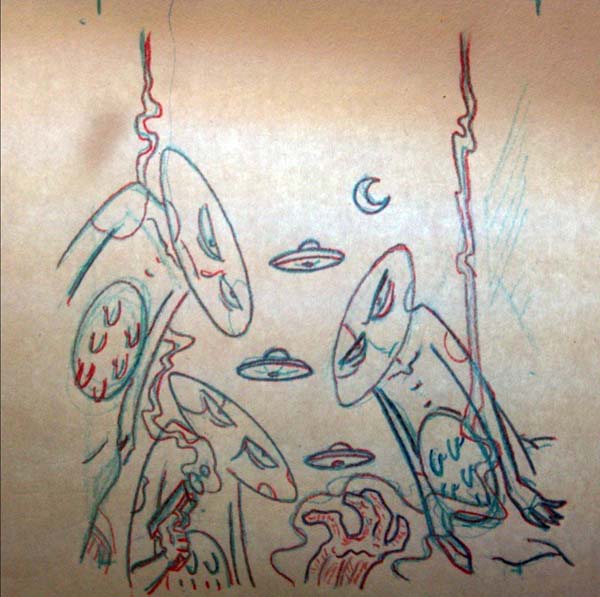 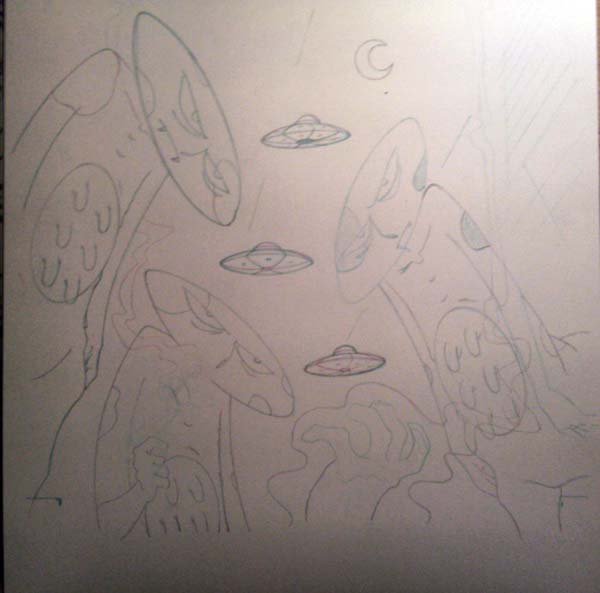 CORRECTION/ADJUSTMENT TO THE RAY GUN 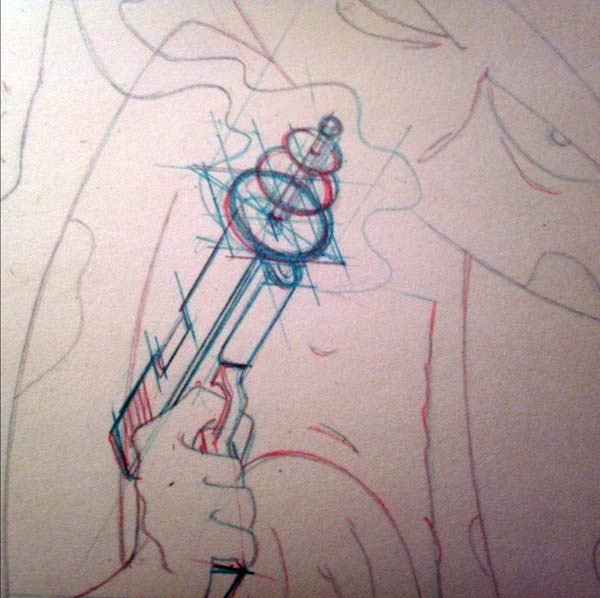 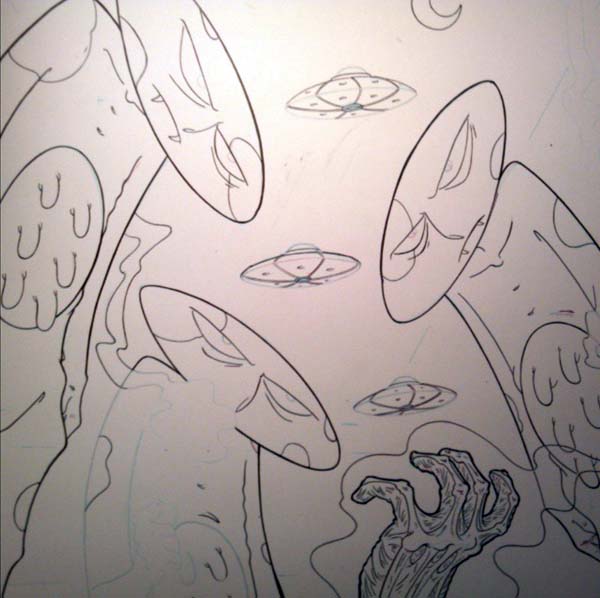 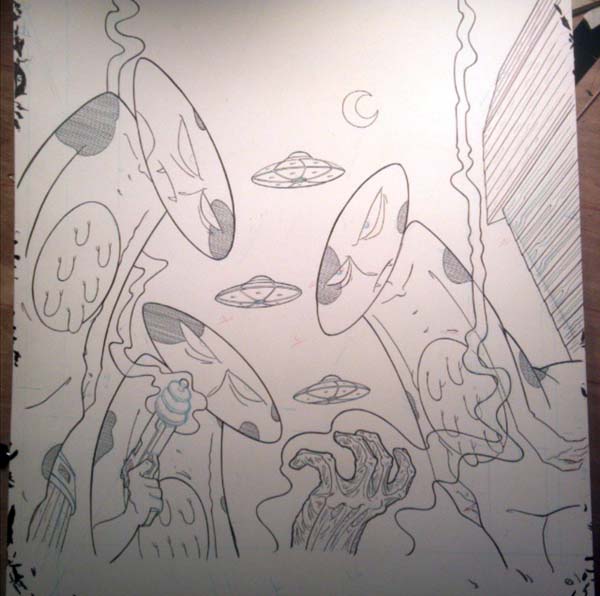 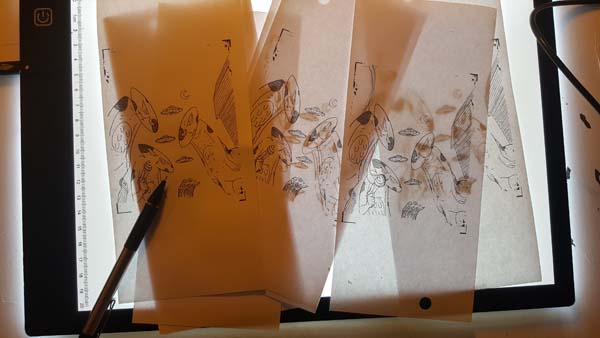 What the fuq...this isn't 1950, I'm not in 3rd grade. Why didn't I open the actual animation program, find my stylus pen and tablet, and plotted it out...instead of jumping into it with no hope of success beyond luck and enthusiasm?

Whhhheeeeeee! Lookit me, I animated...

What a mess. You'd think at that point I'd take a step back, get a visual game plan and get to it.

But, nope. I just scribbled on some more copies and scanned them, got worse results, did that process again...more bad results...then I started modifying the images once they were scanned and layered in, instead of redrawing ever single line and hoping it lines up right once it's layered and in sequence.

I got a little...less...visually chaotic

It was at this point I remembered that animating smoke or water is WAY harder than animating pretty much anything else. If you are animating a guy walking, his legs move back and forth, not easy but not mind numbing. Smoke and water though...they move in one direction but they also change shape. That's two things to deal with at once, and this needs to be on a loop so the end has to sync up with the beginning, which is also tricky when you're dealing with smoke or water.

PLUS, has to do all that and be very...graceful. It can't seem choppy, smoke and water have very smooth movement and that doesn't give you the same room for error as other things. So, I idiotically kept polishing and refining the penciled frames that seemed the closest, trying get it as fluid as I could, trying to not have any choppy movements...this one's closer but still choppy

At this point... I slowed down. Mapped out how things should go ( like the fucking professional I actually am) meticulously drew them out, one on top of the other on a light table, careful to make changes subtle and constant. (although still stubbornly doing it via traditional tools instead of a tablet)

That's pretty close to me being satisfied...That's not too bad. Once I ink it up real nice, that should look good.

you want a good laugh? You want to know why I drink? That one above, I scanned in the roughs, turned them into layers, stacked them, animated it, said "hey...that's the best one so far!" THEN...I looked at the layer window and realized I never organized it.

THAT ONE was animated in the random order of me picking them up off the desk and scanning.

It works better in the wrong order than in the order I mapped out.

Of course I'm made this all way harder than it needs to be, and should have originally approached it like any animation I have done in the past and not just assumed it was going to be a quick project . I'd be done by now, not on the 17th version of a sketched out gif.

Anyways... That's what I've been up to. You'll be able to find this one on SuperRare early this week. I'll blog about it here once it's live, maybe show you progress shots that are closer to the final product.

Hmm, you know...If you've followed me awhile, or are an artist or illustrator yourself, you'll notice that sometimes you start with a piece and refine it and rework it and make different attempts and way down the line you start to notice that the original rough was actually the best version. I'm looking at these gifs, that I am about 15 hours into screwing around on...and...is it just me or is that very first one the coolest, even though that's not at all how smoke works?

Ah well....stay tuned for more! or even better, keep an eye out for the finished piece here-https://superrare.co/artwork-v2/confrontation--13198

And as always, my home base is here-
http://www.arseniclullabies.com/

Good luck with the upcoming NFT listing. I’ve been watching José Delbo kick ass with NFTs in awe! I think it’s amazing that an 86 year old comics veteran is seemingly leading the way in new technology!

Yeah..unfortunately Jose is going to get himself and the site he's on, sued into the stone age...you can't publish your illustrations of someone else's officially licensed characters without a contract. That's the root core fundamental express reason for copyright and trademark laws. I don't see him staying under the radar making money off of characters that a giant merciless corporation owns. He may be a 86yr old veteran, but he's also...stealing.

I'll admit I was a bit surprised with the use of non original characters... but I actually think there is a bit of a gray area specifically due to the nature of NFTs. Publishers have traditionally turned a blind eye to commissions & original art sales of their intellectual property specifically because they're one offs and not mass produced. 1/1 NFTs are a pretty close proxy to that in the digital space. I wouldn't expect DC to sue him into oblivion if he sold the same illustration on Bristol board at a convention. Just another strange tech frontier that needs to establish new norms.

oh, their lawyers will make quick work of that notion. and he's not making small change, neither is the site. Forget what it's worth to them to make an example of what can happen when you steal from them...Those images he made of their characters is being seen across the internet and being used to attract people to that site...oh brother...they can take everything that's not nailed down, and it's on a blockchain. nowhere to run and nowhere to hide.

This post was shared and voted inside the discord by the curators team of discovery-it
Join our community! hive-193212
Discovery-it is also a Witness, vote for us here
Delegate to us for passive income. Check our 80% fee-back Program
$0.00
Reply
[-]
steevc (77) 2 years ago

This digital art thing seems to be taking off. Will there be a demand for digital frames to display it? I am in awe of anyone who can create animation as it seems like such a lot of work. You do seem to do it the hard way, but I know you have your preferred ways of working.

Thanks for sharing with us and have a !BEER

Hey @arseniclullaby, here is a little bit of BEER from @steevc for you. Enjoy it!