Hive Blockchain and the Average User

bagofincome (64)in LeoFinance • 8 months ago 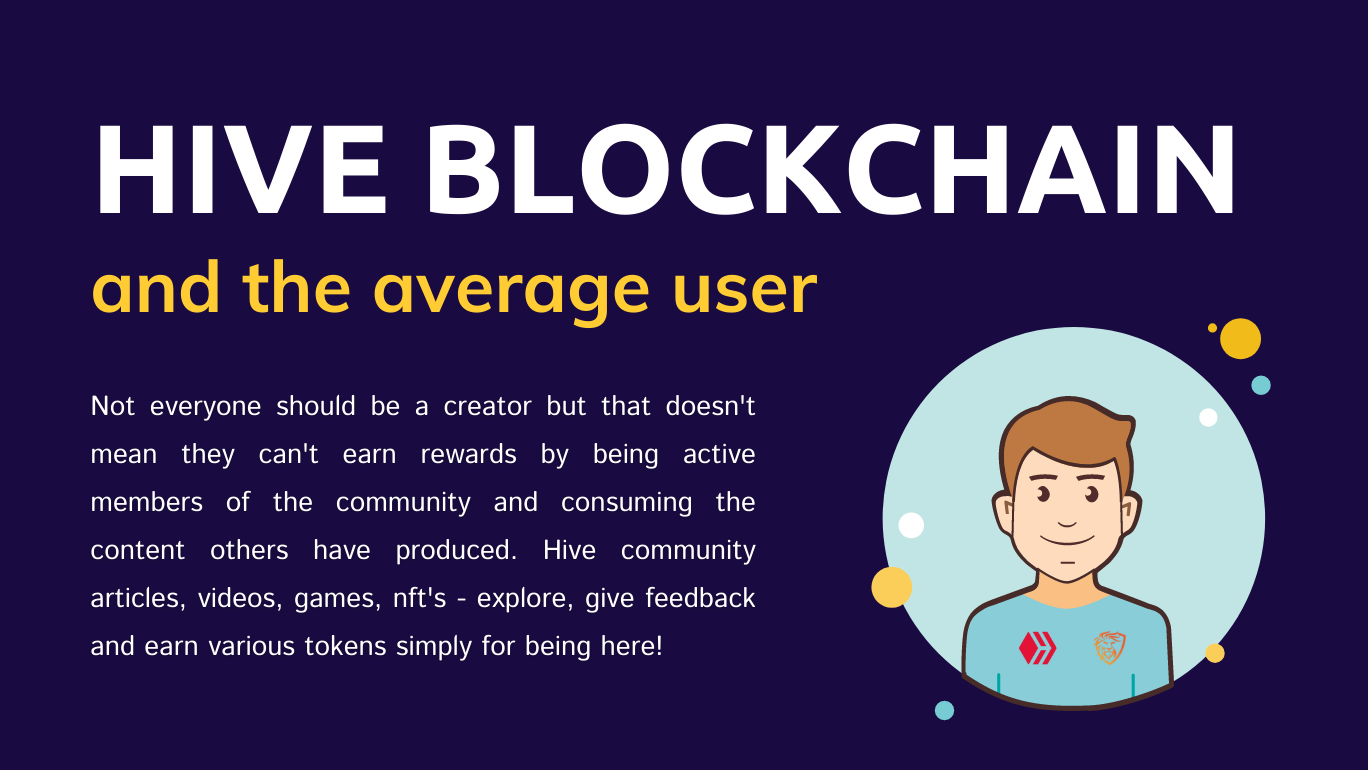 Most people will never write a blog post or compose a song. The same amount of people will never draw a painting nor will they ever code an application. That's just the way it is - most people are not creative but that doesn't mean they shouldn't be rewarded.

Almost everyone reads and listens to music. The same amount of people watch movies, use applications, and play games. They are a part of the community even if they aren't too expressive, without them, there would be no community, only creators who don't have the time to use the things they or others have created.

Don't get confused in the surrounding noises and do the stuff that matters to you until you find your place in the life or the crypto space, or maybe both. It's simpler if you know what it is you like but if you don't, ask yourself what it is that gets you excited.

I could have said it way better but I am learning as well. Every article written gets me a step closer to my ultimate goal of financial freedom. Not that I will earn that much crypto with my posts, I will improve my skills that I will later be able to use in order to complete other tasks.

But where was I? We're talking about the most people. Even if you're not a content creator, you're still a content consumer. Once you read a certain article or watch a video, you can give short feedback of your own personal thoughts on the subject. We all did that at school, and this is much easier - nobody is going to rate your work here, only upvote if it's good.

Even though most people will never create a game, they will surely play games others have created. What if they could invest in the game supporting both the creator and the game economy? On Hive, you can. You can invest in almost anything you see here. How? Delegate your Hive power to it or stake it yourself. Play games on the Hive blockchain, collect nft cards, lands, and other items, and it will surely be worth it as time goes by.

Did you know that HIVE has no CEO? Yeah, there are whales but so does every blockchain out there. On Hive, we have witnesses (miners) who are delegated by the community. A simple but sophisticated system that anyone can join if they're willing to.

There are many communities here on Hive, and some of them even have their own token built on top of Hive. My favorite one is LeoFinance where people (myself included) blog about the economic state of crypto and many ways of earning more tokens. Leo has a lot of alpha. And it works super fast. Not only does Leo have its own defi called CUBdefi, but they have also released a mobile app, and more recently, a whitepaper (still in works).

Can you believe there are this many communities? And that's not it, check out for yourself! No matter what you're interested in - you can easily find it on Hive.

What else to add?

99% of the crypto projects die a natural death because either there's no product or there is no community. Not only does Hive have both, but we have also experienced bear markets and brutal crashes and still kept on going. If you are in crypto for the long term, Hive is a way to go and a great place to connect with like-minded individuals.

What do you think? What made you consume this content? Write an answer and you'll probably earn some Leo tokens (and maybe gain a follower).

Have a fantastic day and keep on grinding! Your @bagofincome

An active way to earn as a content consumer is via curation--You like the contents you read and earn. You can take it a step further by giving feedback which in most cases receives upvote. The hive blockchain is very flexible and getting to know more about the system is rewarding.

Yep, the opportunities are endless!

$0.00
Reply
[-]
poshtoken (78) 8 months ago
The rewards earned on this comment will go directly to the person sharing the post on Twitter as long as they are registered with @poshtoken. Sign up at https://hiveposh.com.
$0.00
1 vote
Reply
[-]
toofasteddie (74) 8 months ago

HIVE is not about blogging only, so you don't need to be a blogger to succeed in this ecosystem. Essentially you can do anything with HIVE, sometimes people just think about the blogging aspect but there are infinite applications still to implement on it.
Good post btw

Exactly! And as we grow, more possibilities will open up.