I never doubted Cubfinance: I trust the process 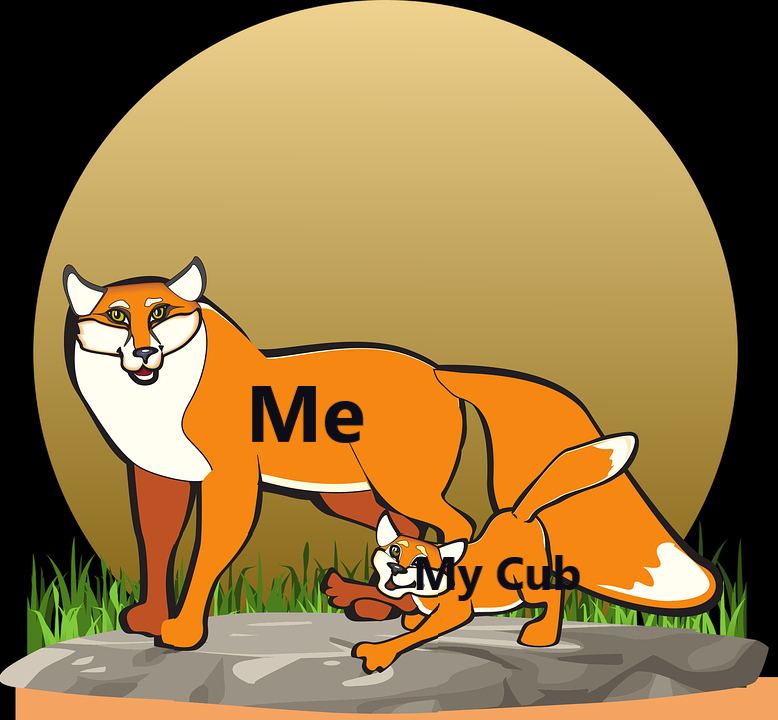 If you're looking for an AMM to pool assets in and mine liquidity rewards, then you should look no further than Cubfinance. It is a project run by the @leofinance team, a solid team with a track record of excellence and consistency.

Cubfinance is my portal into the world of Defi farming and it has been a great experience so far...because I hodl. I initially planned to explore other Defi farms with my earnings from Cub farm but thanks to new developments, I don't think there's any reason to.

As the project evolves, there will really be no reason to go outside the platform for liquidity rewards because with new kingdoms coming through in the coming weeks/months, what will even be your reason to go outside? A fine example is the fact that Auto compunding Cake on Pancakeswap offers a smaller APY than doing the same thing on Cubfinance. This is because you earn Cub on top of the compounding cake in your wallet.

As the system becomes more robust, so will my investment in the platform. At the time of writing, I'm invested in three mining sections. Two are in kingdoms and one in farms. When the Cub-BUSD farm is migrated to Kingdoms, I will also move my LP tokens to the auto compounding farm as well, meaning that my entire operations will be in the kingdoms.

When everything is moved to Kingdoms, I might be earning fewer cubs from my operation but my LP tokens will be compounding as well, and that to me is a victory on its own. I've wanted to increase my LP tokens but I'm stretched financially and don't have any spare to throw into the pool.

The price is right 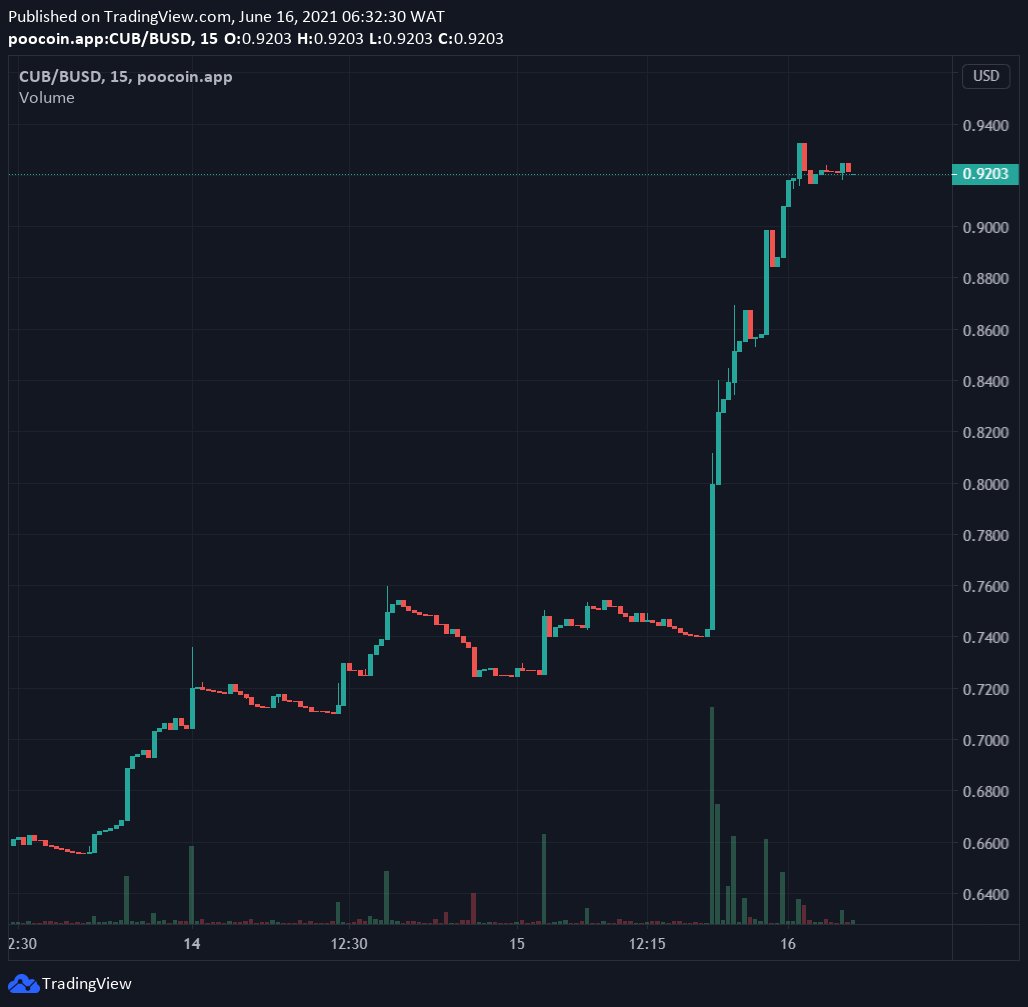 After performing quite badly for a while and dropping to as low as $0.5, the token is now on the rise again and looking very healthy. It is swimming ever closer to the $1 mark and I don't think it will stop there.

@edicted mentioned the $1.76 barrier as a tangible barometer to measure the pressure of Cub in the market. Considering how things have moved in the past couple of days, it is not out of the question to think it possible.

Actually, considering the fact that there's not been any serious marketing outside the Hive community, as well as Twitter, and the Audit hasn't even come through, this price rise is somewhat remarkable. It is a testament to the quality of the product that has attracted 1 million dollars in TVL overnight. I don't think this the end though, so bears and weak hands that dumped should be prepared for more face melting.

I'm in it for the long haul, so short-term variations don't bother me. I held my LP tokens throughout the "crash" and I'll still hold them when things get better. I know some will say that this is a risky approach but I intend to let the path of the Cubfinance project determine my growth in Defi Farming.

What I'm saying in essence is that Cubfinance's evolution from a simple project into an advanced one that will be the home of Billions of dollars worth of locked value will have no choice but to carry me along. I know this because I'm going to be going on the ride with this project and clinging on to its trajectory.

Signup for Oropcket with my referral link

Nice strategy dear. One quick question I am in cub-busd pool, will the user need to do anything from thei side for migration. Or will that get migrated to kingdoms automatically. Cheers

I also wonder. When the cub-busd kingdom comes around,, I believe we will have more clarity.

I would guess like the other Kingdoms will require moving the funds manually into the kingdom.

The fact that cubdefi is positioning itself to be a one stop shop for everything defi is like the ultimate icing on the cake for me....like imagine Walmart, but for DeFi protocols, that’s cubdefi for me and I’m certainly pleased about that.

That is one of the reasons I'm very bullish about the project. There will be no need to go outside to farm. Keep all your value inside and just focus on getting rich ser

I initially planned to explore other Defi farms with my earnings from Cub farm but thanks to new developments, I don't think there's any reason to.

This was my plan in the very beginning, too. I was going to stake 80% of my Cub and invest the other 20%. Then, 20% of my Cub became worth less and less and it just didn't seem worth it.

What I might do now is turn the Cub I harvest into other assets (like Leo at the moment) since the Kingdom is autocompounding for me.

DEC is another one I like to get, because I'm also working on my Splinterlands collection as an investment.

I've been getting some Leo in the process as well. I noticed you're up to 7k ish Leo power.
Are you buying packs or just buying cards?

I've been doing both. I bought 1000 Untamed packs and got more than I paid worth out of the first 500 and about broke even on the second 500. I bought 300 Dice packs and did awesomely, though. Was up like $600 after I opened them.

I am glad it is gaining momentum after the drop, and your financial speculation about hitting the $1 mark is sure

From there, it will go further, and all the various branches you mentioned will help skyrocket it's influence

Imagine when marketing is done outside hive, and twitter, they will lots of investors strolling in as the potential of cub is will be quite attractive

At this point it is stupid not to put your crypto in a Kingdom if you were already going to invest in that asset. I'm currently selling my HIVE and HBD to put them in the CUB Kingdom.

It's the right thing to do tbh. My current struggle is converting Hbd to Cub. I wish there was a direct route.

You can get from HIVE to BNB with https://bscbridge.deathwing.me
It's not much better than the method you are probably already using.

Wouldn't it just be one more step after converting HBD to Hive? How do you convert Hive to Cub?

Yes you did, don't lie haha.

Lol I got scared because of the dump( it is a human response) but I never pulled out any investment or doubted the potential. I even took the opportunity to put in more money and grow my farm 😄

I bought all the way down! Pretty good for dollar cost averaging. I bought some in the very beginning, too, so I need the cheap stuff to even it out.

Cub finance will lead that's one thing for sure

I also feel very good that I did not hesitate and bought at $0.5, it is a great investment that is now doubling, too bad I could not buy more.

Yeas! Finally numbers go up again :)
As you are in for the long run as me I wish us both and all of the investors good luck! MOON SOON
!PIZZA

@belemo! I sent you a slice of $PIZZA on behalf of @solymi.