bitcoinflood (73)in LeoFinance • 2 months ago (edited)

Bitcoin continues to rally and along with it many alt coins are hitting all new highs or about to hit all new highs.

What interesting is taking a look at altcoins that rallied in 2017-2018 and seeing how they are today. Many however are still off of their all time highs however they are starting to get close to hitting that threshold.

What will be interesting is to see what happens once some of these altcoins start to beat their old per coin values.

Bitcoin hitting $50,000 per coin is more of a milestone than anything and people love milestones. While $50,000 per coin doesn't really mean much in the grand scheme of things it does provide a goal and target for many involved within crypto that want to see it be successful.

However once we hit that what's going to matter the most is if we stay over it or if there is a massive sell off. Normally when big targets are hit it's followed by a quick hard sell off as the push to hit that target is normally strenuous on the market.

Just over the last three months bitcoin has been on a tear but you can see at each mile stone it starts to sell off before it gets another push. Most of this push is happening from big time influencers and hype and not really based off of real "value" However this is the age we live in where people follow influencers. As much as people say they hate it and they don't this clearly shows that they DO! 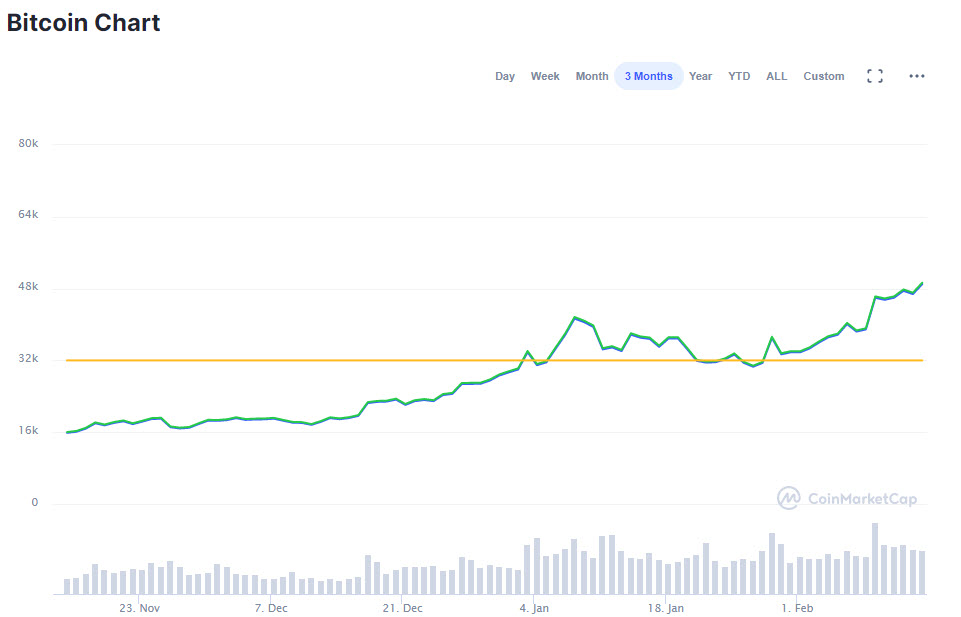 If you look at the target points of $30,000 and $40,000 on bitcoin you will see that there is a sharp rally through it followed by a sell off and then some wild up and downs and after that a continues reduce in price. This most likely will also happen to bitcoin today when it hits that $50,000 market a sharp rally to that point followed by a hard sell off and then some very volatile trading as people start to scoop up profits.

Even though a rally to sell off is likely to happen this week what I'll be looking at and you should as well is how those funds are being taken out of bitcoin. Are they going back into FIAT or are they staying within crypto and being pushed to platforms such as Ethereum and other altcoins.

I firmly believe you'll start seeing more flow into altcoins as the % rallies are far higher than that of Bitcoin. This also could be an issue for bitcoin as it continues to grow in value. It starts taking larger amount of funds into order to gain those massive % rallies people are so use to and love.

Many including Ethereum are still off of their all time highs however they are starting to get close to hitting that threshold.

Is this a joke, or what?

I think if we cross $50K, some sells will kick in and bring us back down for a few days before decisively staying above 50. It seems to be the way traders have things set up.

I have that same feeling

Calling today huh, interesting. I will call next week, maybe even tomorrow [Monday] in North America with the announcement that another influential person or fund has acquired BTC. There is still some good news to come that will pump out bags further. Compared to the previous two bull run cycles we are still early, so many coins should still have much room to grow.

Really thought we would hit it today. Still time :) If we don't we could be going back down. It's all going to depend on if some famous person tweets about it again sadly lol

oof a double to 100k is pretty high! But most likely the target that most will have in mind. What's going to be a challenge from that point is people are only going to start seeing small percent increases for all the money being injected which starts to remove some of that hype factor. I'm very curious to see how the market reacts the week after we hit 50k