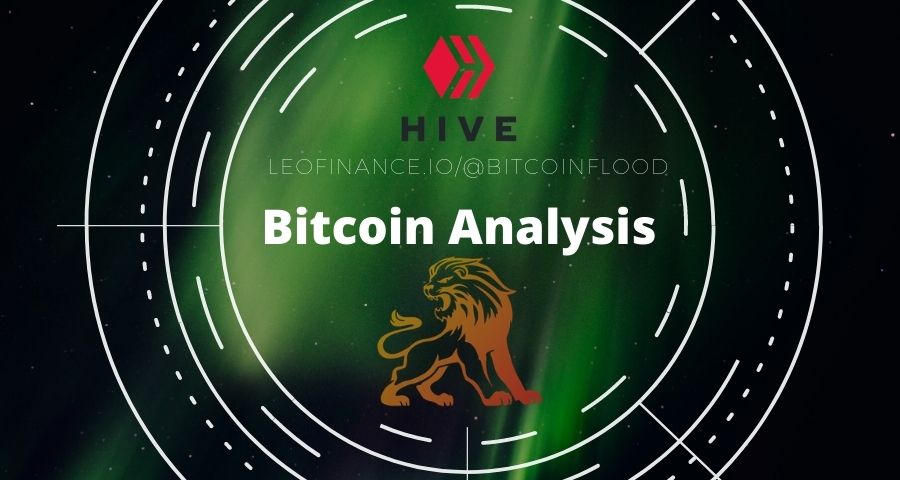 Ever since bitcoin hit $30,000 it's been fueled above $50,000 from Influencers tweeting about it. It all started with Dogecoin via WallStreetBets and Elon musk and continued it's rally into Bitcoin.

After no word from them for a while about bitcoin what happened?

One of the biggest blood baths ever as bitcoin crashed along with all alts with it.

The price correction without any outside support should have sent us to $40,000 possibly $35,000 where the last hold of about 1-2 weeks held the price. But yet again influencers tweeted about Bitcoin again and prices SOARED.

This comes on the back of yet again Elon Musk and now Cathie Wood.

For those of you who don't know Cathie Wood she's the founder and CEO of ARK Investment Management LLC which is an investment management firm that manages the largest exchange-traded fund in 2020. She's also been named the best stock picker of 2020. So her picking Bitcoin holds a huge amount of weight to others.

What does all of this mean?

It means you can toss out ever technical analyst of bitcoin and crypto right out the window. Hype and influence like this will randomly show up and the ones in charge? The influencers. They can easily stock up on bitcoin the night before and tweet about it the next day skyrocketing prices and taking the profits. It's really as simple as that. With no regulations on bitcoin unlike the stock market this most like will be the near term trend we will continue to see over the next few months.

Price dips, mega buy ins, influencers ramping it up. Just look at February alone and this clearly paints a picture of where we are headed and honestly it makes me a bit nervous. 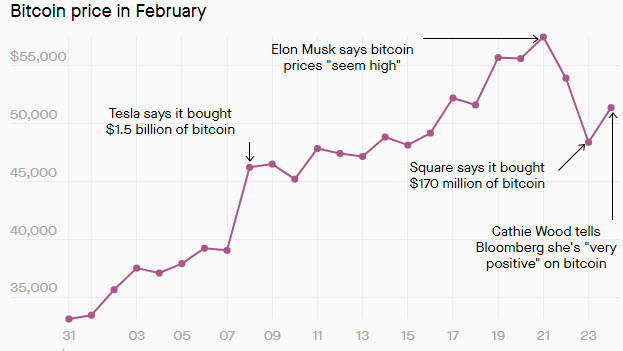 My official bitcoin analysis F everything you thought you knew about bitcoin it's now up to even more manipulation.

I agree to you, crypto market manipulation is real, and it affects our trading.

It's always been there from whales however now we have mega influencers doing it. Expect more to follow suit soon.

I think you're being a bit simplistic. Elon Musk's opinion was quite irrelevant until Tesla bought 1.5B. Now he has skin in the game, so his opinion has some value. He's still only .1% of the market cap. Also you are completely dismissing F2 Pool and the Central Banks' FUD.

We already know the central banks fud. What's new in this rally is Influencers pushing it. Nothing else has changed besides that. Bitcoin transactions are still expensive AF, it's the same blockchain and nothings changed on that level over the last three years from the last rally.

We all yell about pump and dump communities well Influencers are honestly just that. Pumping up their own investments. If this was done in the stock market their are reappreciations for doing so. Elon Musk ran into this a few years back for doing it. But he can get away with it on Bitcoin because it's not regulated.

I love the dude and what he does don't get me wrong but this is the state of the crypto markets we live in today hate it or love it it's just the way it is now.

Everyday is just a wonder of who is going to talk about Bitcoin, it's crazy but I love it ngl!

However I believe there are better supports that can sustain the price of BTC.

It can sustain it to a point and of course hype is needed to get more involved. This isn't a way of bashing anything it's just honestly how things are done now.

Indeed influencers are defining trends and just a tweet from personalities like Elon Musk can do either good or bad. It is quite bad this is happening, it is like we threw all the economics out of the window.

It can start to have very negative consequences. Of course Hype is need to bring more people in and that's welcomed but as this trend catches on you're going to get some bad actors and possibly trash bitcoin and crypto by doing so. The more crypto in the hands of more people is a good thing it's far to centralized still

As humans I think we like to look for causality: the price did this because someone said that. I think it’s usually not that simple. Sometimes prices swing for no apparent reason. Other times, it’s obvious manipulation or mob action.

I love your graph. Funny. What do you suggest then to us the small fishes? Go with the flow?

You kind of have to, it's just like being like a whale. Now it's whales and mega influencers playing the market.

Congratulations @bitcoinflood! You have completed the following achievement on the Hive blockchain and have been rewarded with new badge(s) :

Dang I need to step up my game here!