Hive Power Up and Power Down | Historical Data By Day, Months and Top Accounts

How it the powering up HIVE going? Time to look at the recent data and at the historical rates. 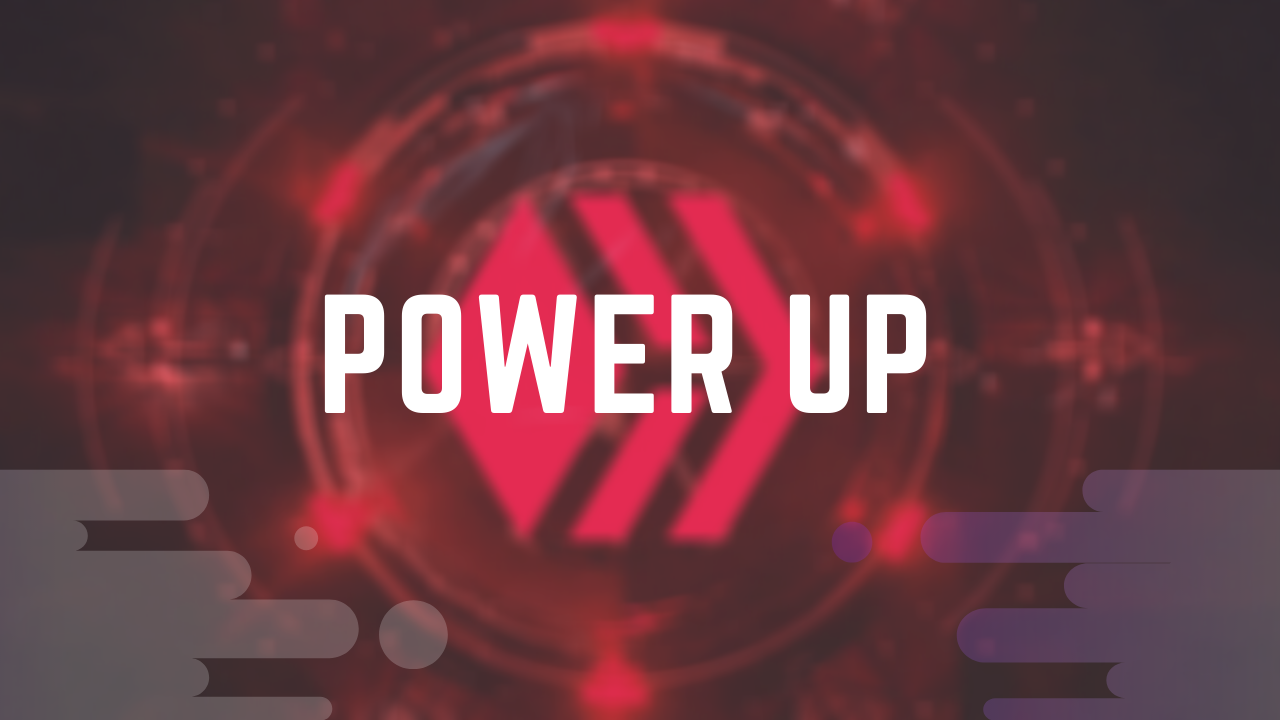 We will be looking at:

The period that we will be looking here is from the creation of the old chain 😊, March 2016, since it influence the hive power overall.

Here is the chart for the all time Hive powered up. 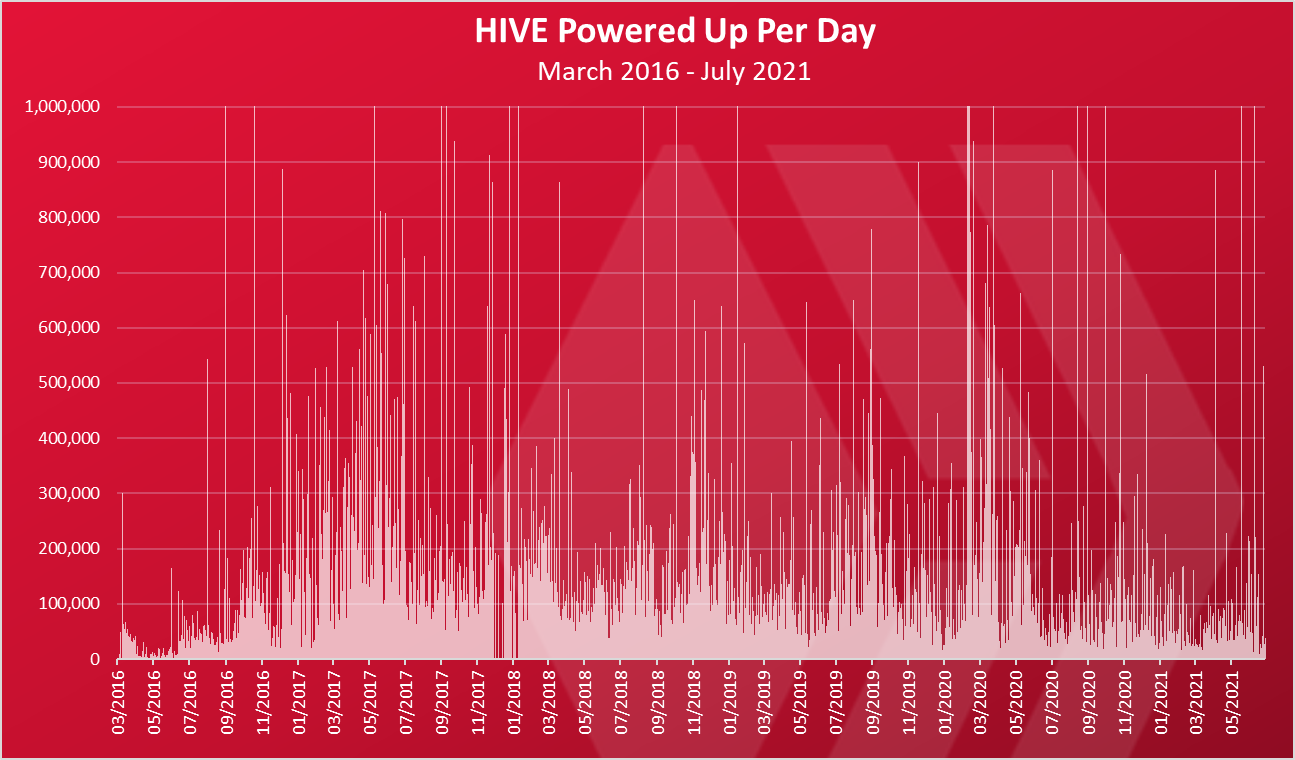 These are daily columns and we can see there is a lot of spikes. Overall there seems to be a trend for more powering up in the first half in 2017, then a slow down trend, a huge spike in March 2020 again.

Here is the monthly chart for better representation. 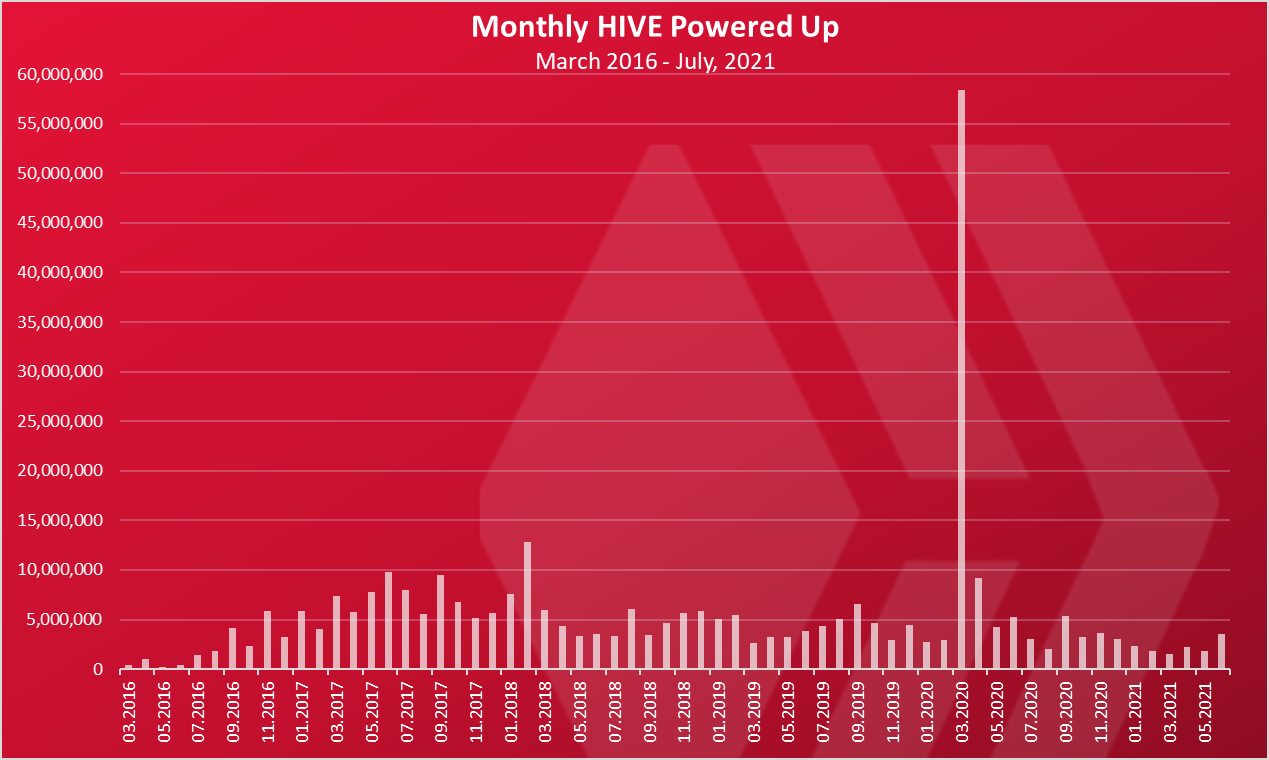 The war for the chain in March 2020 is dominating the chart. It really has left a mark on the chain. A total of 58M Hive was powered in that month, a lot of which from exchanges that were holding user funds. In the previous period we can see some up trend until January 2018, and then a slowdown.

To get the overall numbers for power up vs power downs we need to take into consideration the Hive Power from inflation. Half of the author rewards, witness rewards and curation rewards are all paid out as HP. We can say this Hive is being powered up from the start. 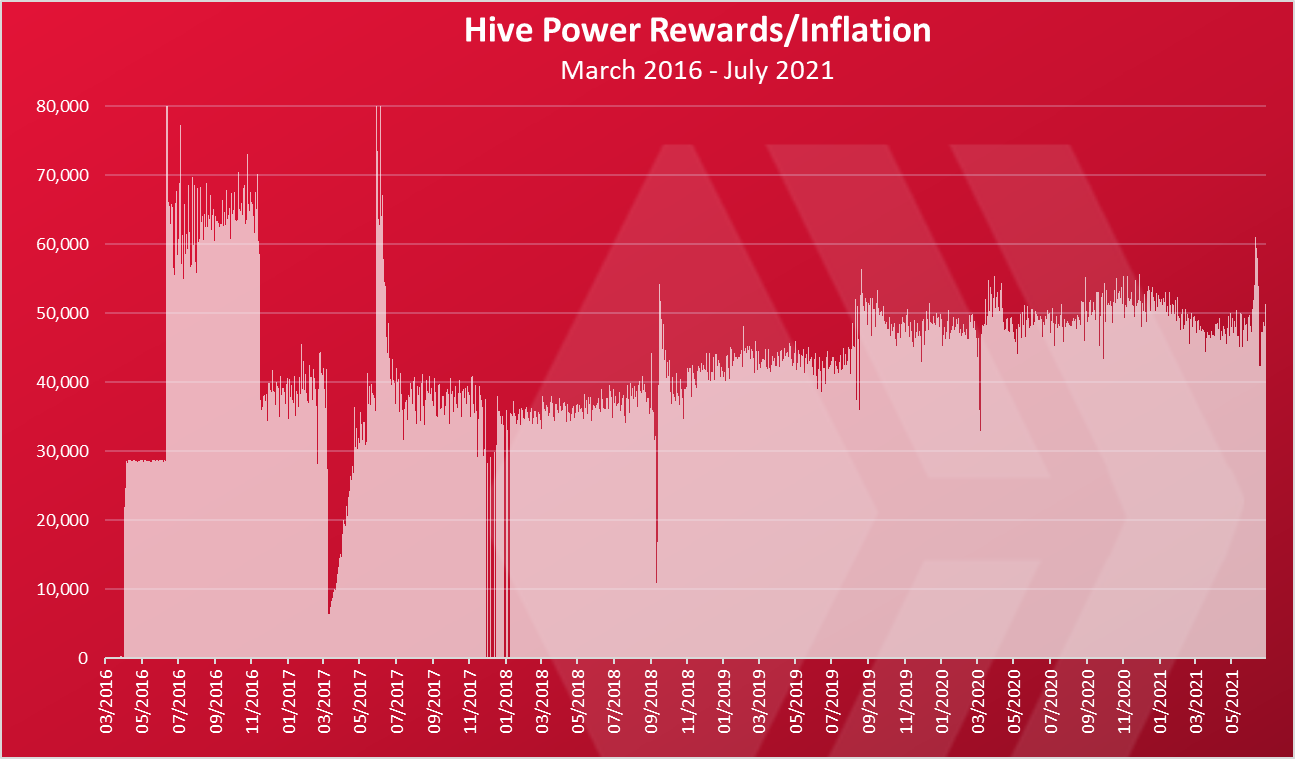 In the last period the HP from inflation is around 50k HP per day.

Here is the monthly chart. 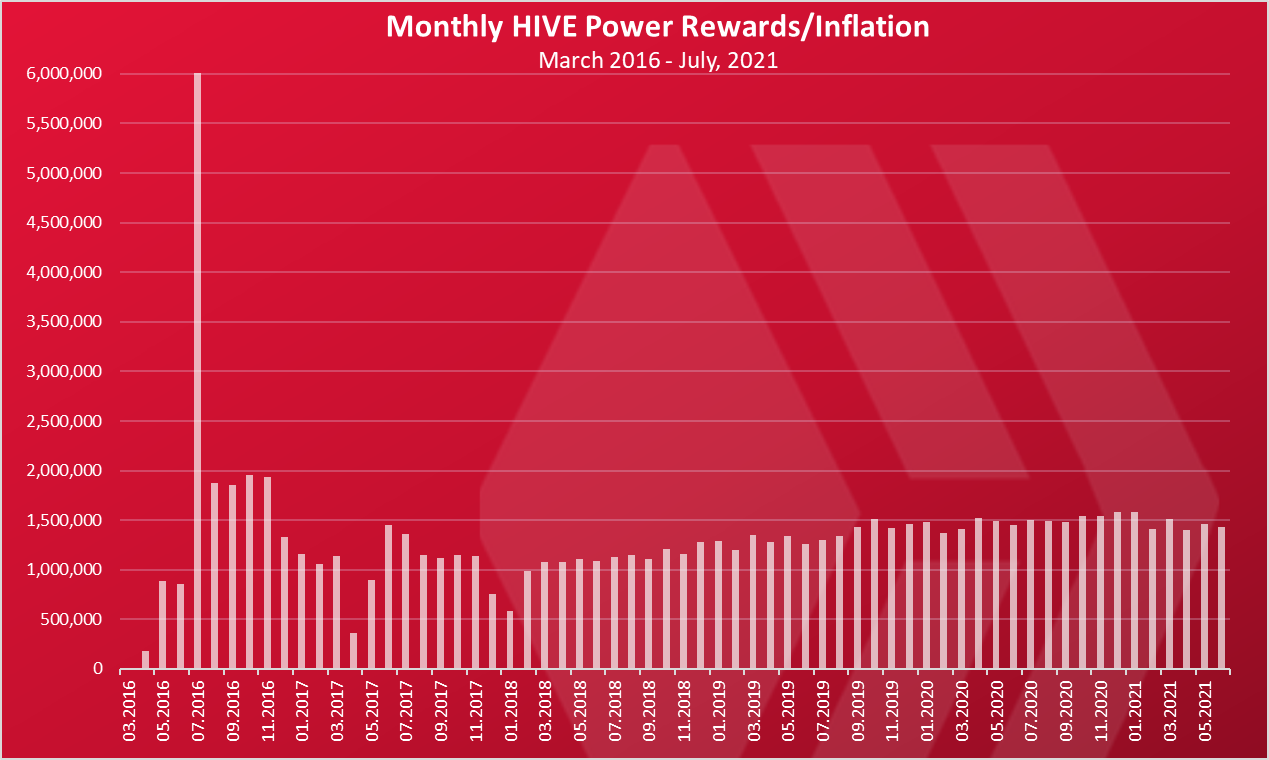 There is a big spike at start, because of the first authors payouts were delayed back in 2016. They were all paid at once on July 4th for a few months back.

In the recent period, there is around 1.5M as rewards in Hive power.

Here is the chart for the Hive Powered down. 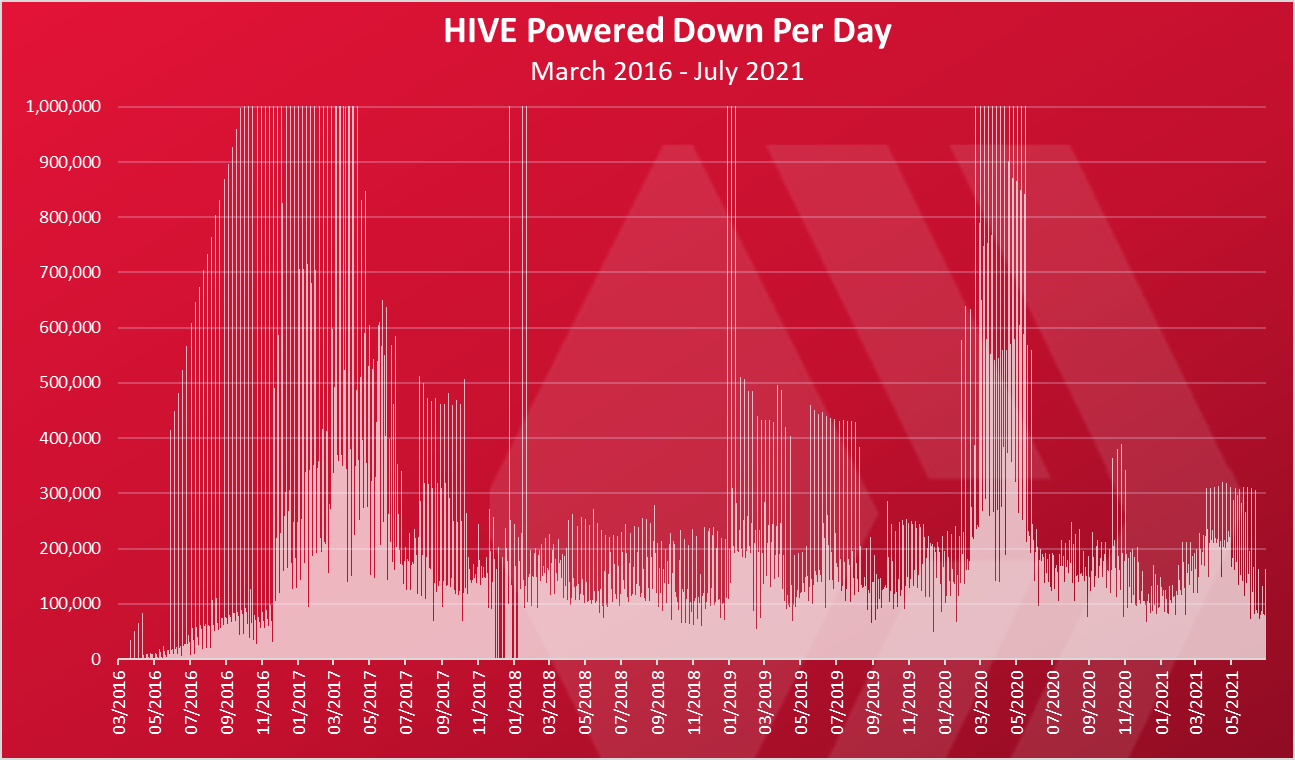 We can see that there is a lot of powering down at first, in 2016. These are mostly the first author and curation rewards. Then a spike again in April and May 2020, mostly form the exchanges powering down after the war for the chain.

Here is the monthly chart. 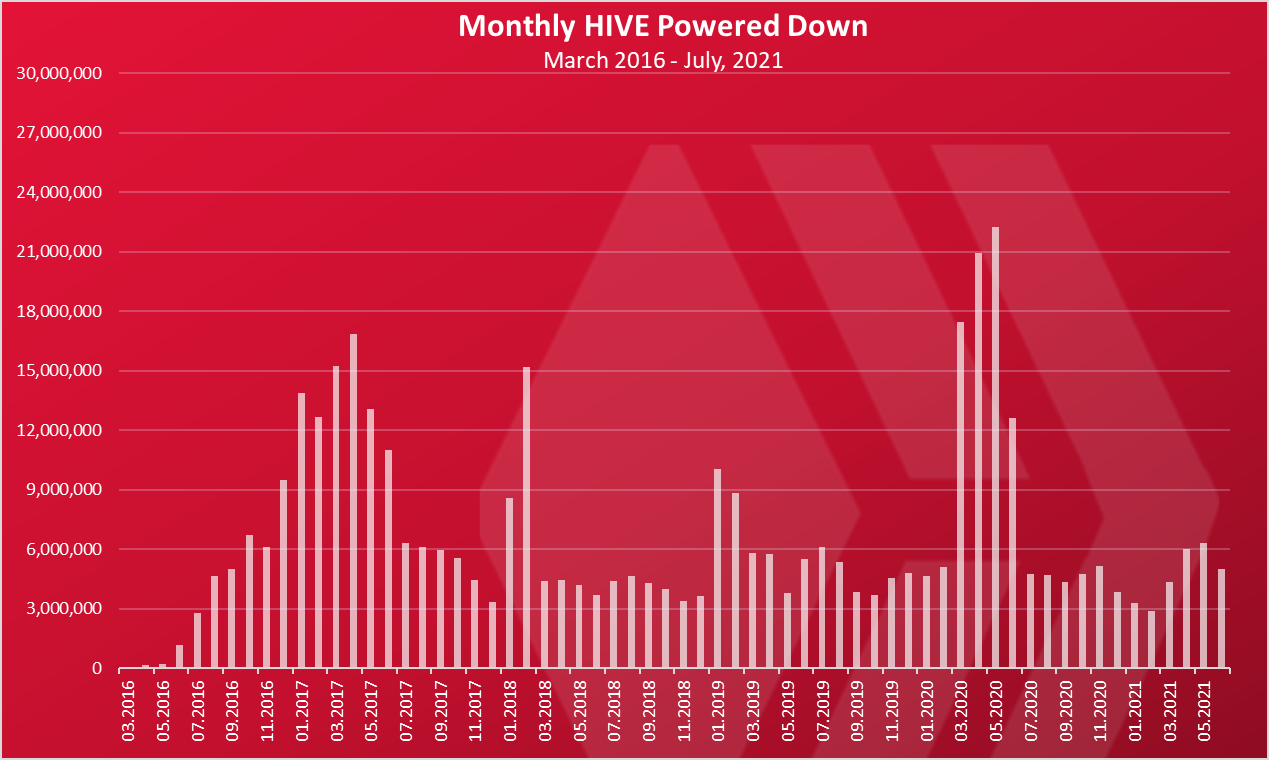 We can see the trend here for more power downs till the mid 2017, then a spike in January 2018. Next are April – June 2020, after the war for the chain, and exchanges powering down.

Power UP VS Power Down

Here is the chart with the difference in HIVE power up VS power down, including the daily rewards in Hive Power (author rewards, curation rewards, witnesses’ rewards). 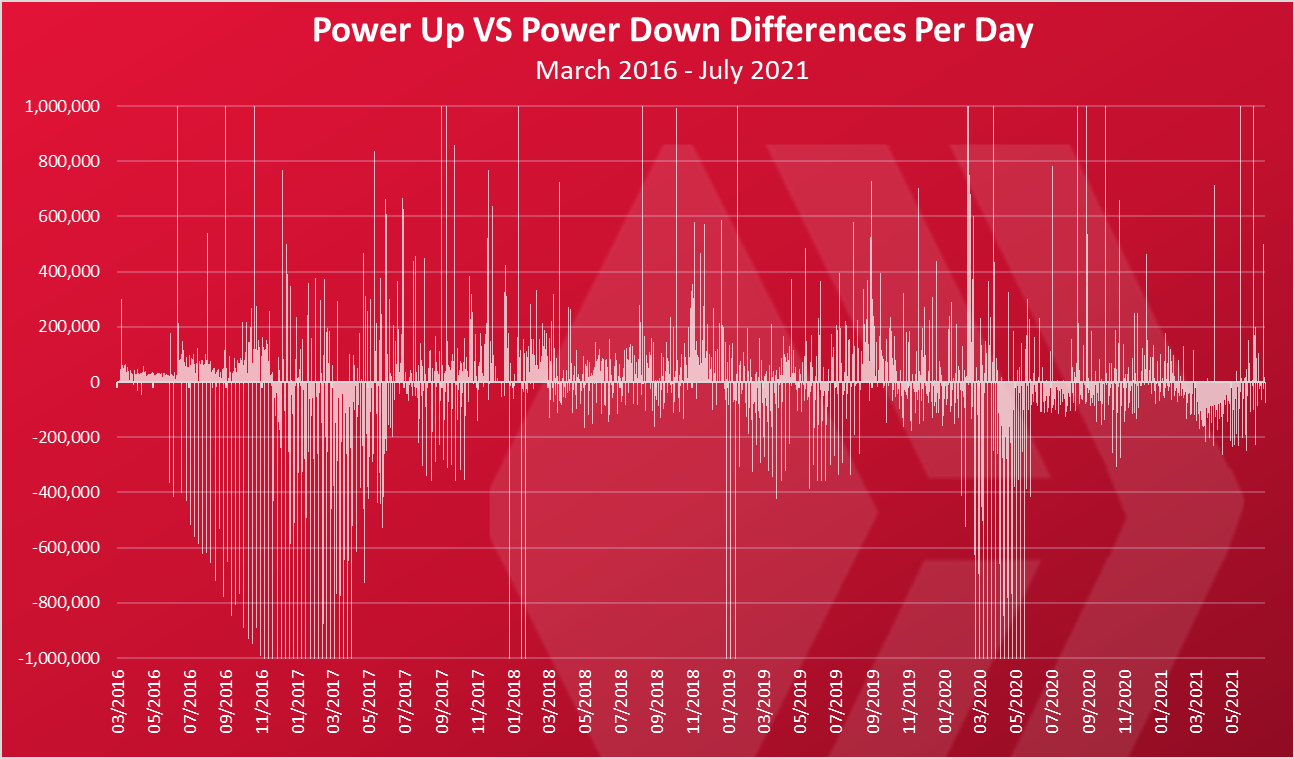 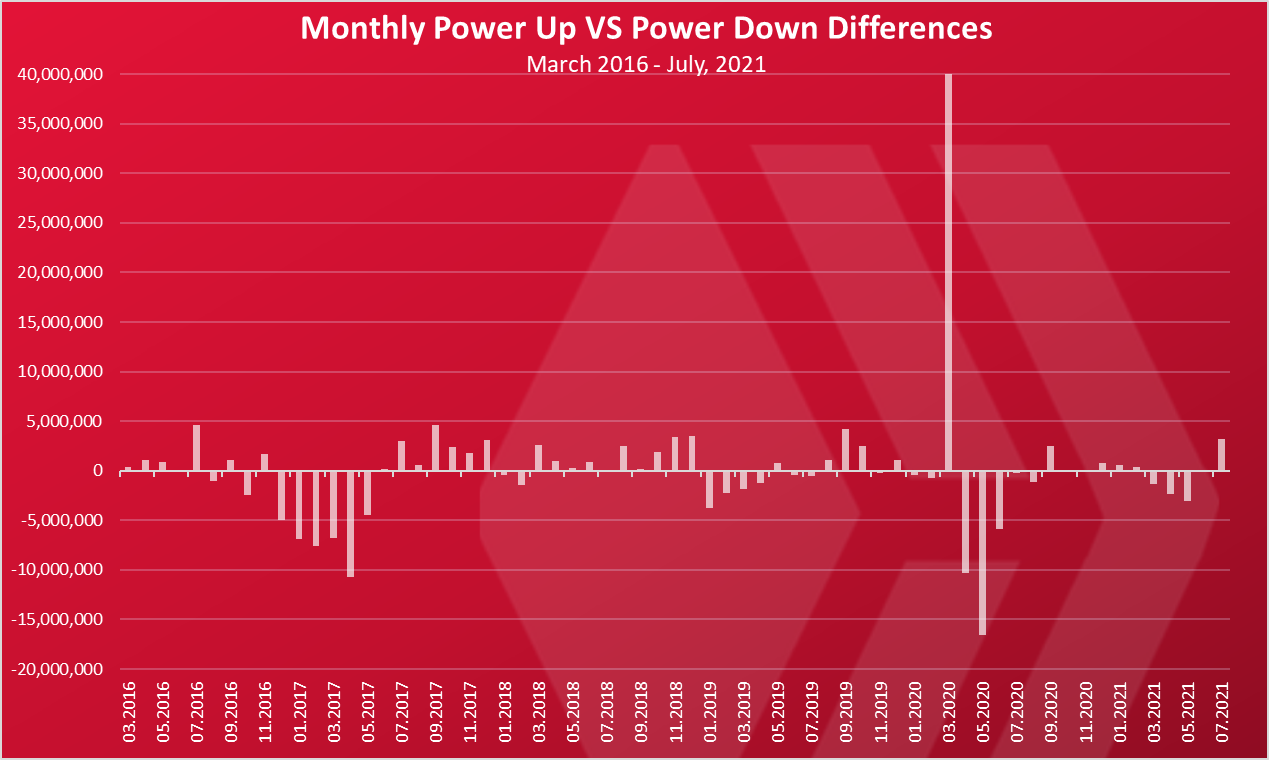 Again a lot of net powering down in September 2016 – April 2017, then some ups and downs and a huge spike in March 2020, and then in the opposite direction in April, May and June, three months to power down.

If we zoom in for the last year for Hive only we have this. 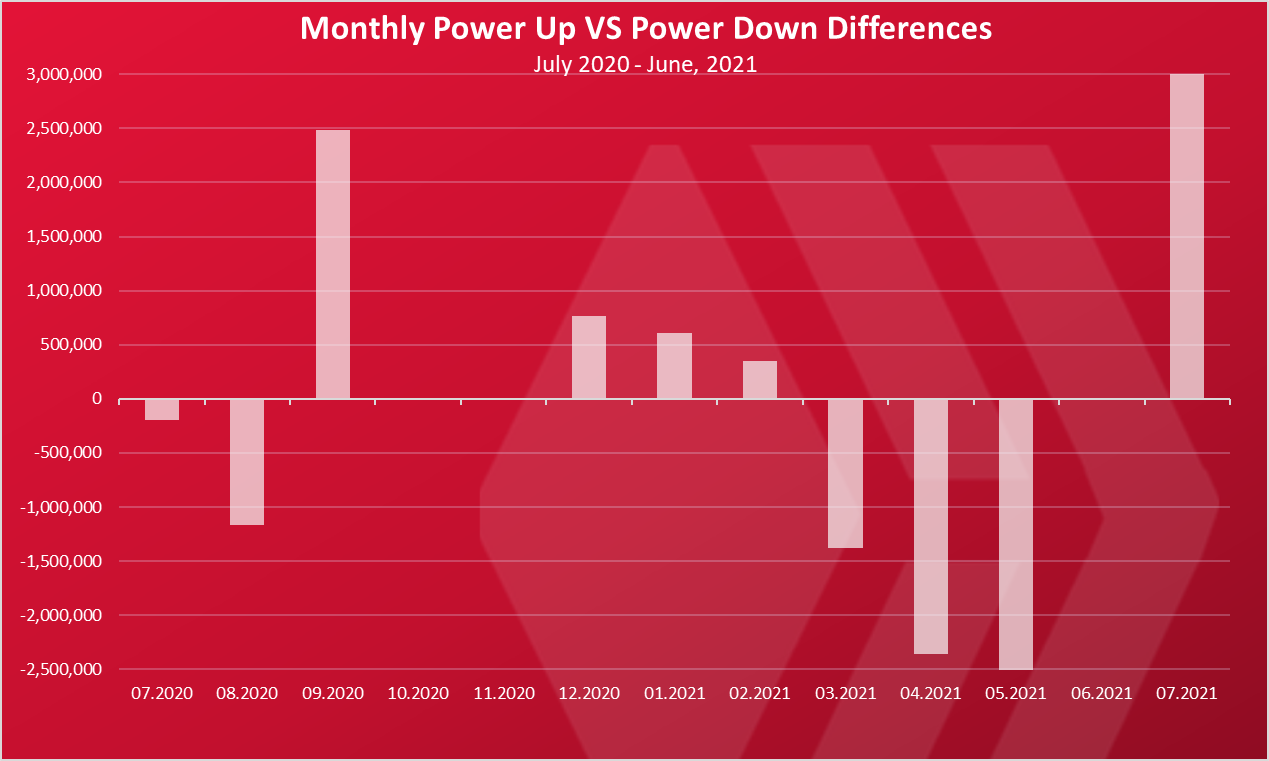 A clearer picture from the above. A 2.5M net Hive powered up in September 2020, and the next months up until March are all in the positive. Then in March 2021 we have more Hive powered down, probably due to the increase in the price and Hivers wanting to sell some.

Top 20 Accounts That Powered Up 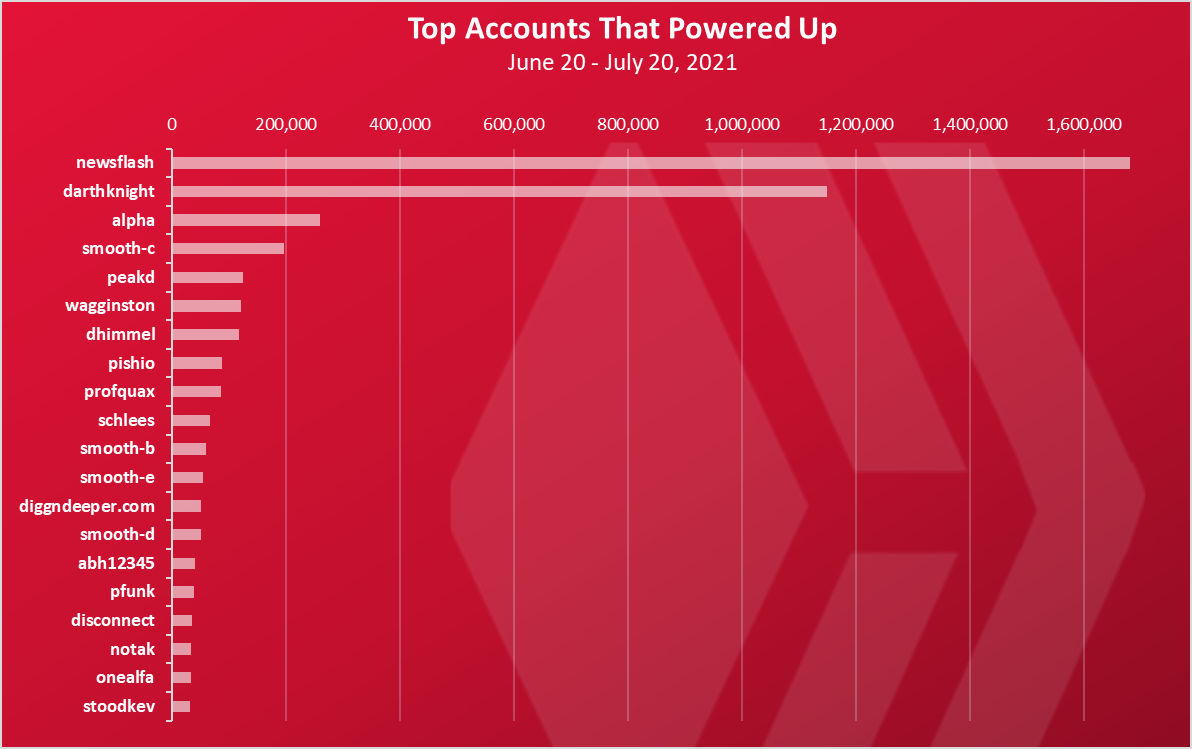 The @newsflash account is on the top with 1.7M Hive powered up, followed by @darthknight and then @alpha.

Top 20 Accounts That Powered Down 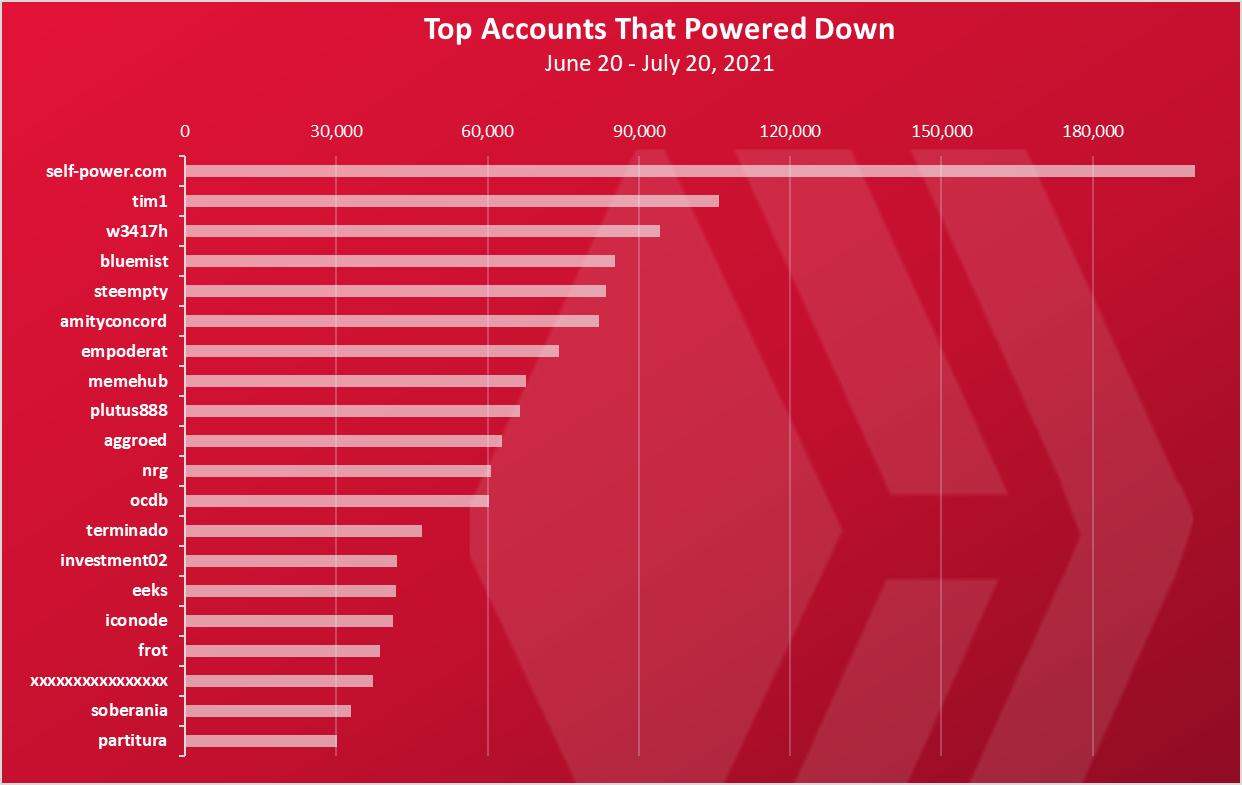 The @self-power.com is on the top with 285k, followed by @tim1 and @w3417h. A lot less amounts powered down in the top 20 here. This has resulted in more hive powered up in the last period.

Overall, the staking numbers are almost constant on Hive in the last period, with just a bit more Hive being powered up the powered down, when we include the HP received as rewards as well. July is on a track to have a record high amount in Hive powered up, but this is mostly because of few large accounts powering up.

This is great! I write post for updates following defi on the Polygon Network!
https://leofinance.io/@johnnycrypto1/new-this-past-week-s-successfully-launched-high-risk-farms-the-polygon-report-07-23-2021

From what I can see a relative balance has been maintained between off and on lately.

Yea with July pushing the numbers for power up :)