How many active accounts the Hive blockchain actually has?

We have all hear the number on the users posting, with some speculation like 3k daily, 10k monthly etc.
But as we know the Hive blockchain is a complex system with more ways for interacting with the blockchain. Second layer solutions are taking over, step by step. 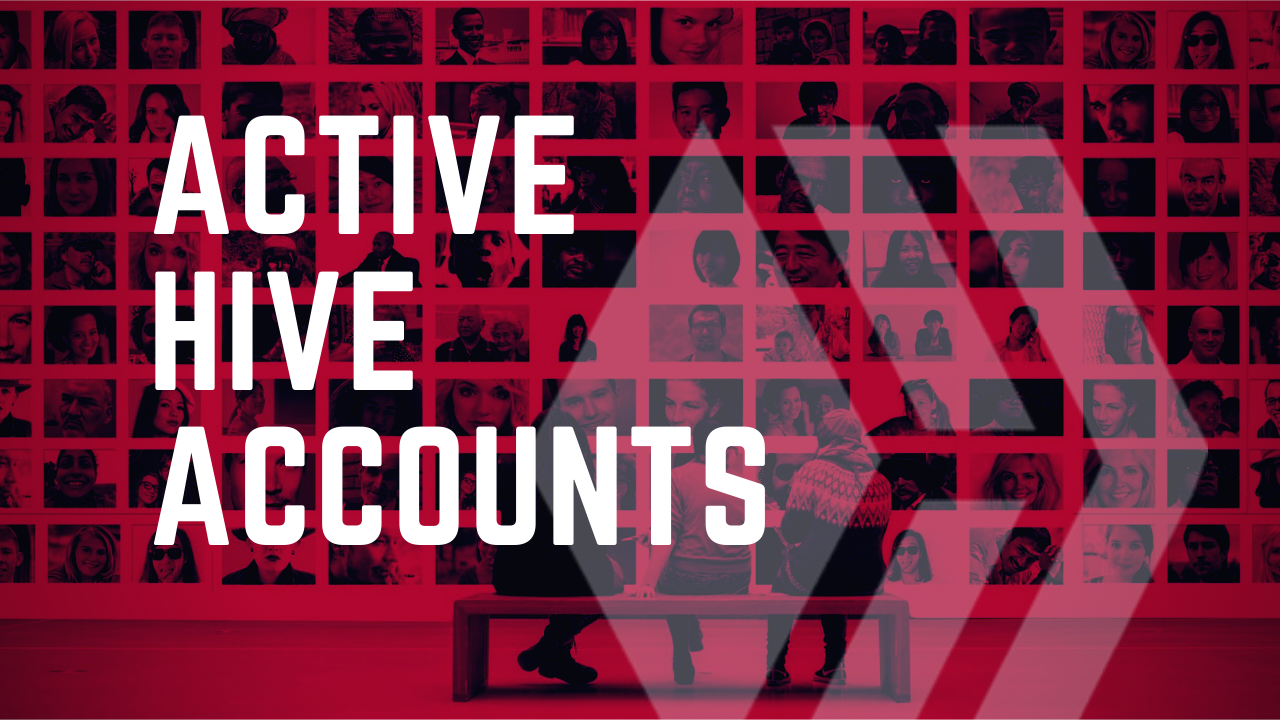 The dApps websites like https://www.stateofthedapps.com/ , https://dappradar.com/ like to make the comparison between the numbers of users of different dApps. Usually they look only for the specific dApp data and not the blockchain.

In the good old Bitcoin days, users or wallet addresses were able to do only one thing on the blockchain: Transfers coins.

On the Hive blockchain, users can do a lot more than just transfer coins:

Apart from the above, reading, or page views, is also a crucial part of this ecosystem, but this type of operation is not stored on the blockchain. There is some general traffic websites that can be used for this, like https://hypestat.com/.

First let’s take a look at the number of accounts that are posting on the blockchain, as one of the core operations. 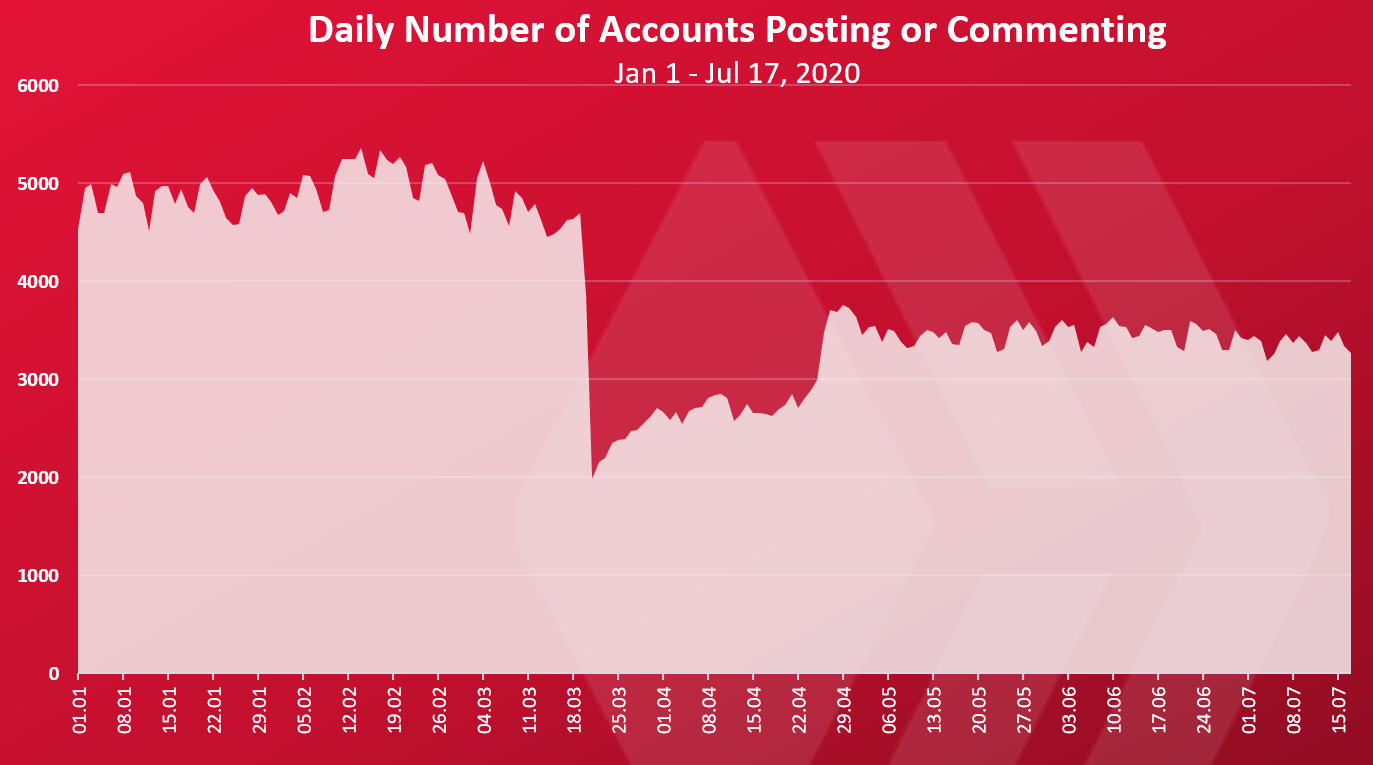 The above is the chart for DAU, for accounts making posts or comments on the blockchain. We can see that prior to the hardfork from Steem to Hive on March 20, 2020, this number was around 5k, then it dropped and start increasing again with around 3.5k DAU these days.

The chart for MAU who are posting looks like this. 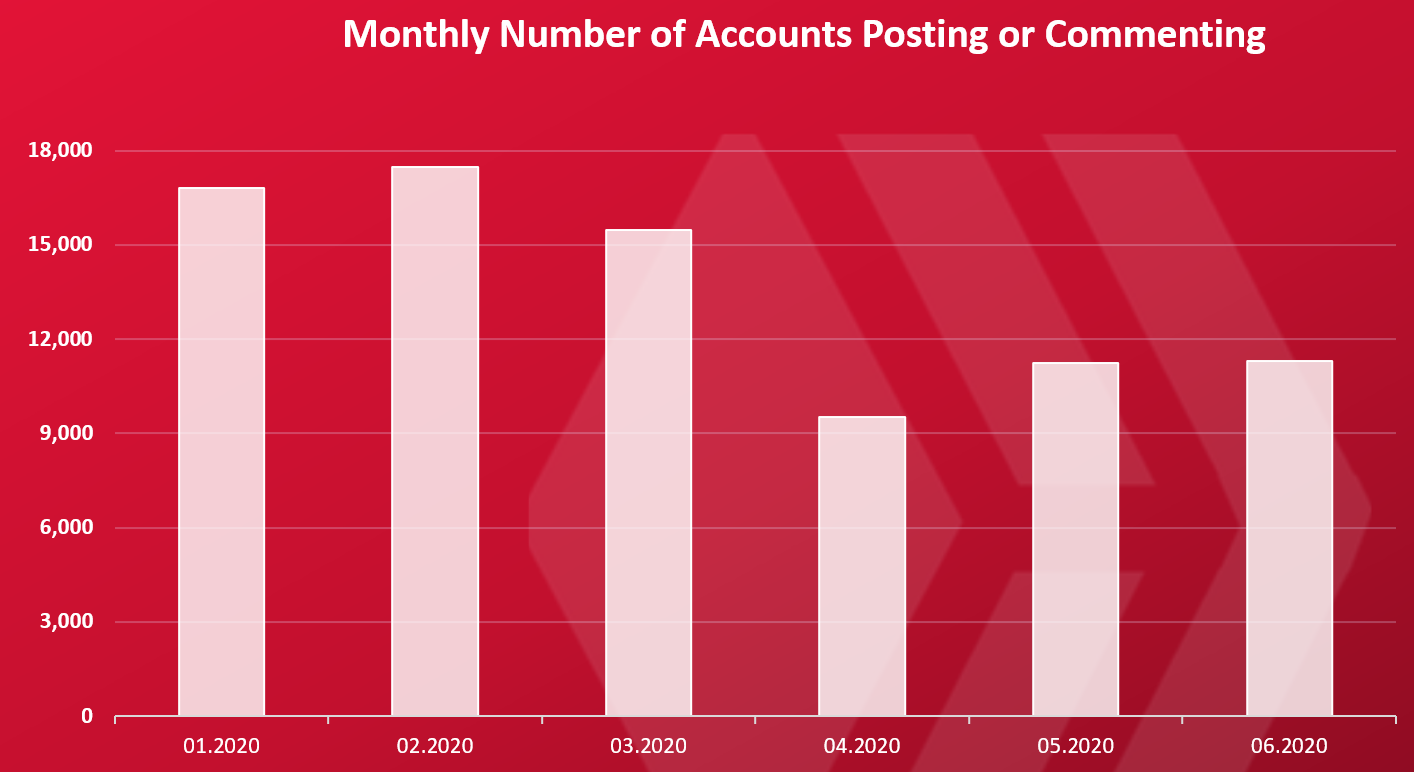 Similar pattern as for the above with more than 15k MAU before the hardfork and around 11k after the hardfrok.

How about then number of accounts that vote. What is their number? After all the voting feature on the blockchain is at its core. Rewards are distributed via votes.
Here is the chart. 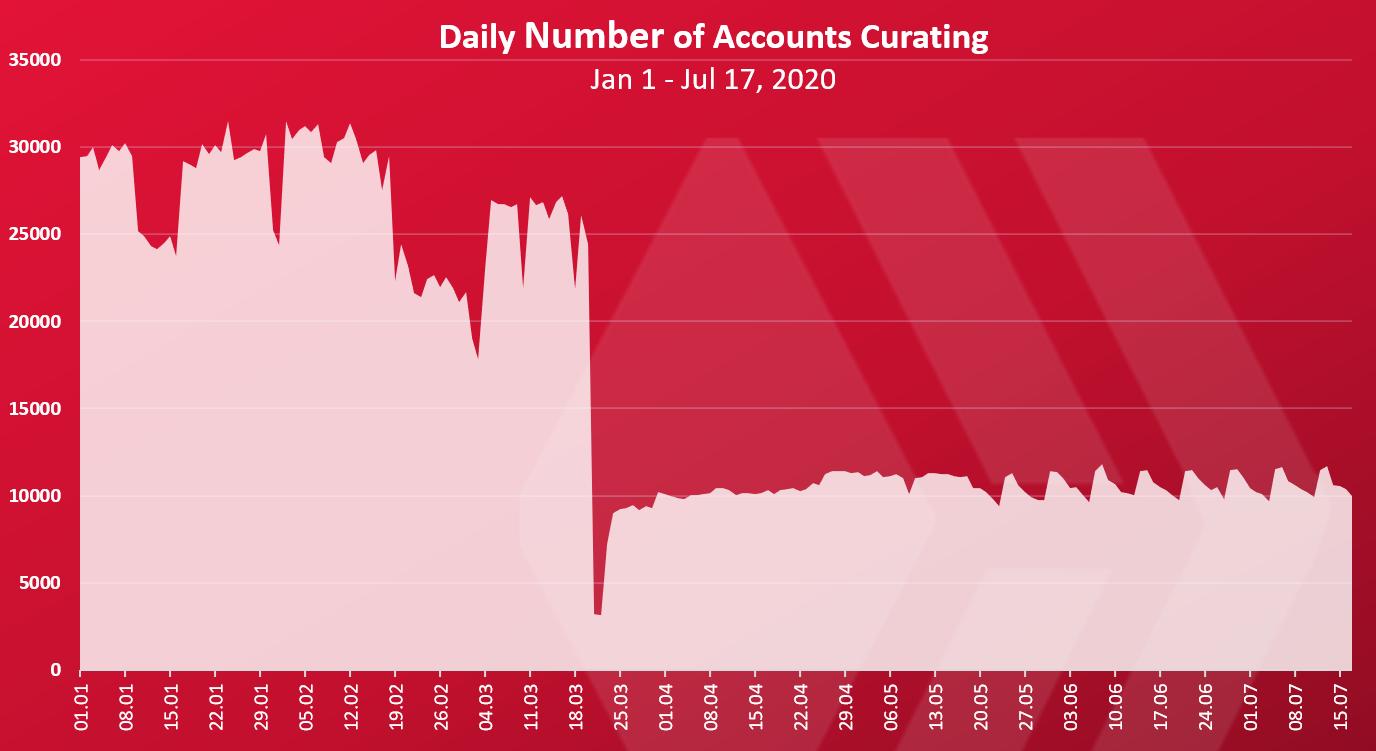 Interesting the drop in the number of accounts voting/curating is bigger than the drop in the accounts posting. For the posting part we have seen a drop from 5k to 3.5k, and here that drop is from 30k to 10k accounts. Maybe some voting bots stopped working.

Next the monthly chart. 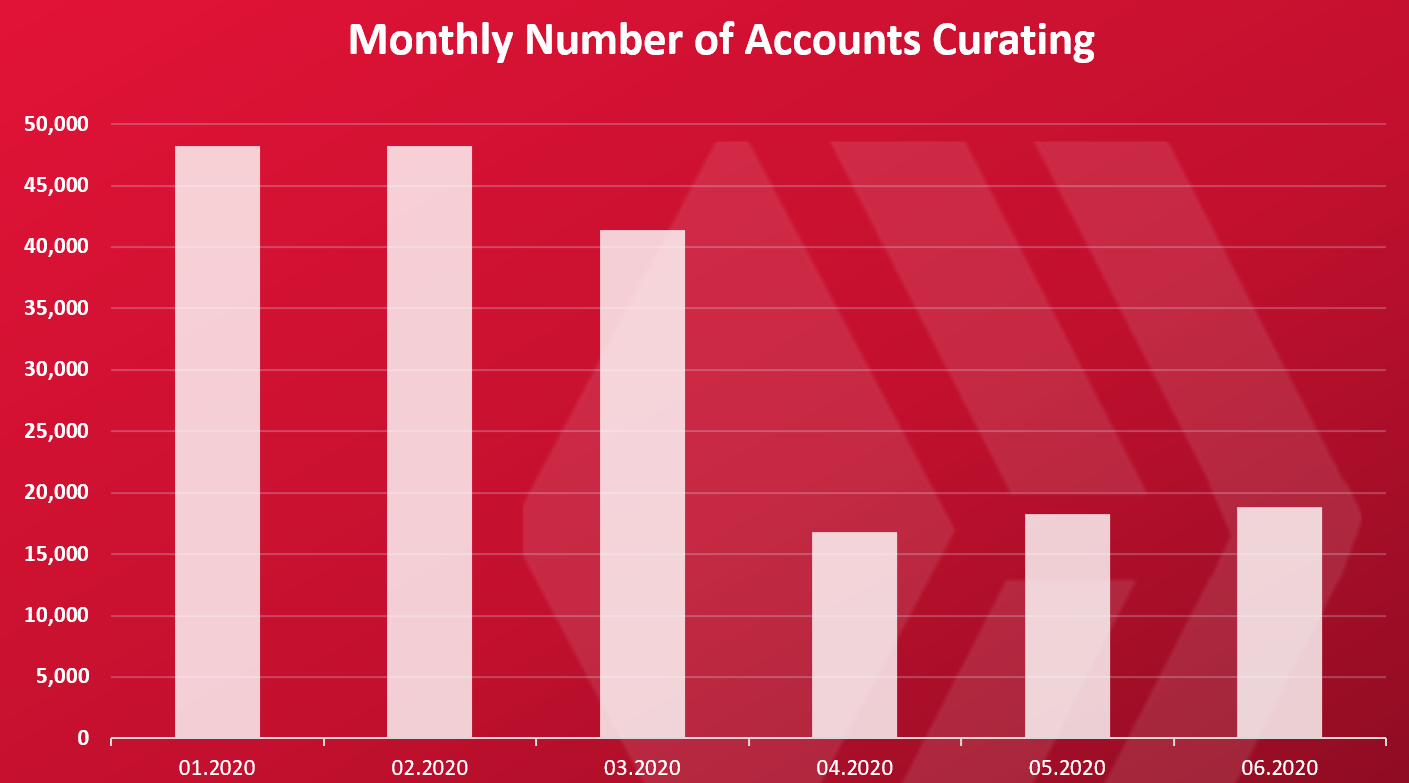 Here as well we can notice the drop after the HardFork. Again, much bigger then the drop in the number of posts. Prior to the HardFork there was almost 50k accounts voting per month, and now this number is around 19k.

Number of Accounts That are Making Transfers

What about the basic crypto activity? Transferring value. How many users are making daily transactions? Here is the chart. 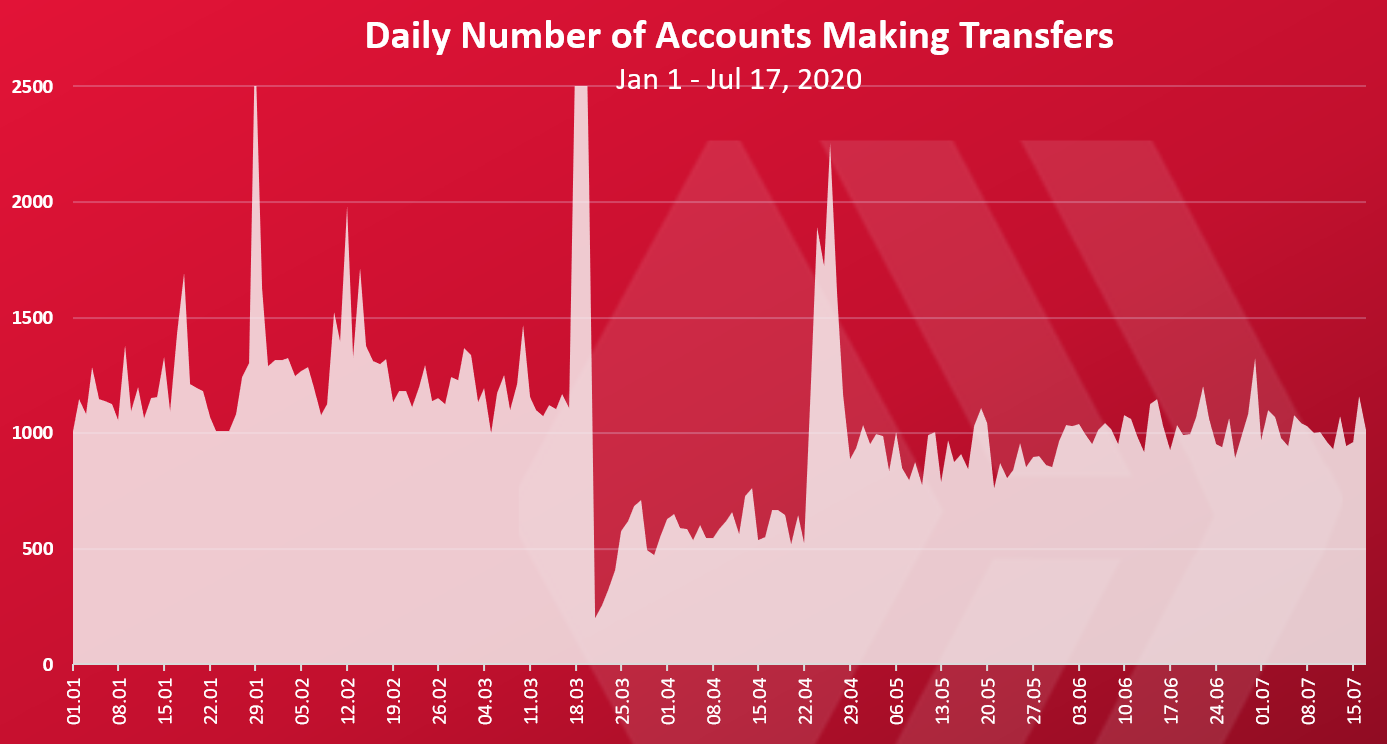 The number of accounts making transfers has been just above 1000 before the HardFork, then a drop and back again to almost the same levels as before to around 1k accounts per day transferring coins.

The chart for the MAU in this category looks like this. 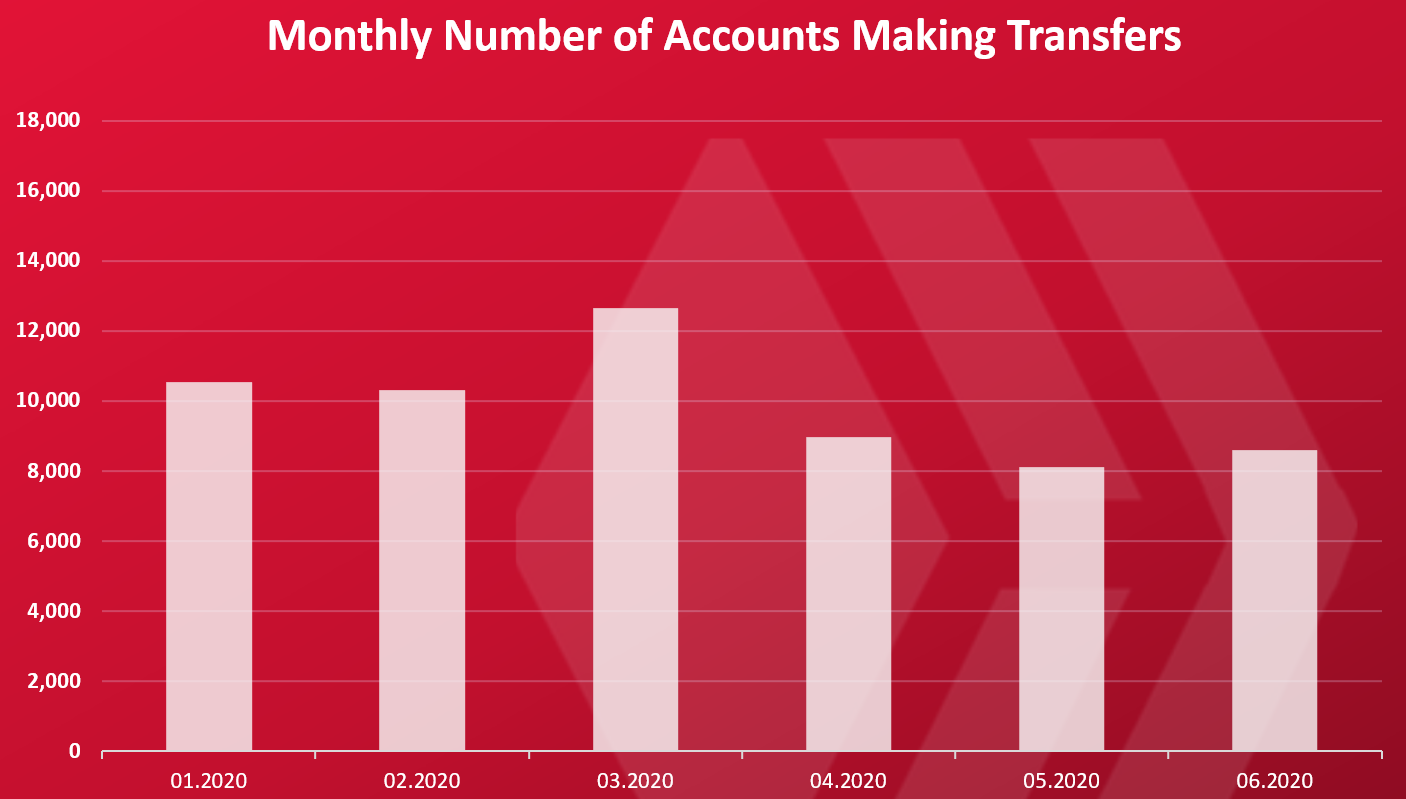 More than 10k users per month transferring coins, with a bit of spike in March, when the HardFork happened and then a slight drop to 8k accounts per month.

Number of Accounts That are Making Custom JSON Operations

The custom JSON activity has been on a rise on the blockchain, mainly because of the games using this functionality. 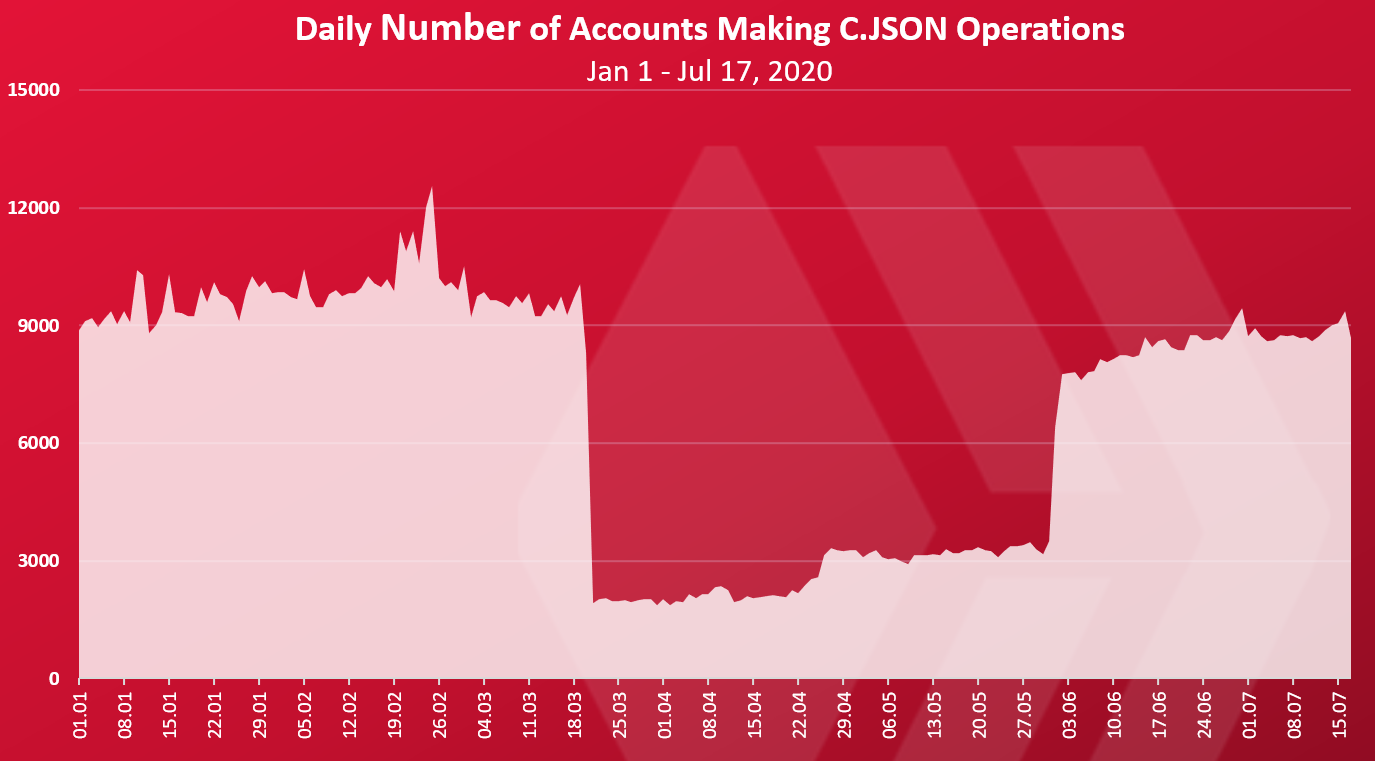 This is an interesting chart. We can see the shar drop in the number od accounts making Custom JSON operations from more than 9k to around 2k after the HardFork. Then it went up a bit to 3k. The massive jump happened in June when Splinterlands moved to Hive driving the numbers of accounts that make custom JSON transaction up again to 9k again.

Here is the MAU chart. 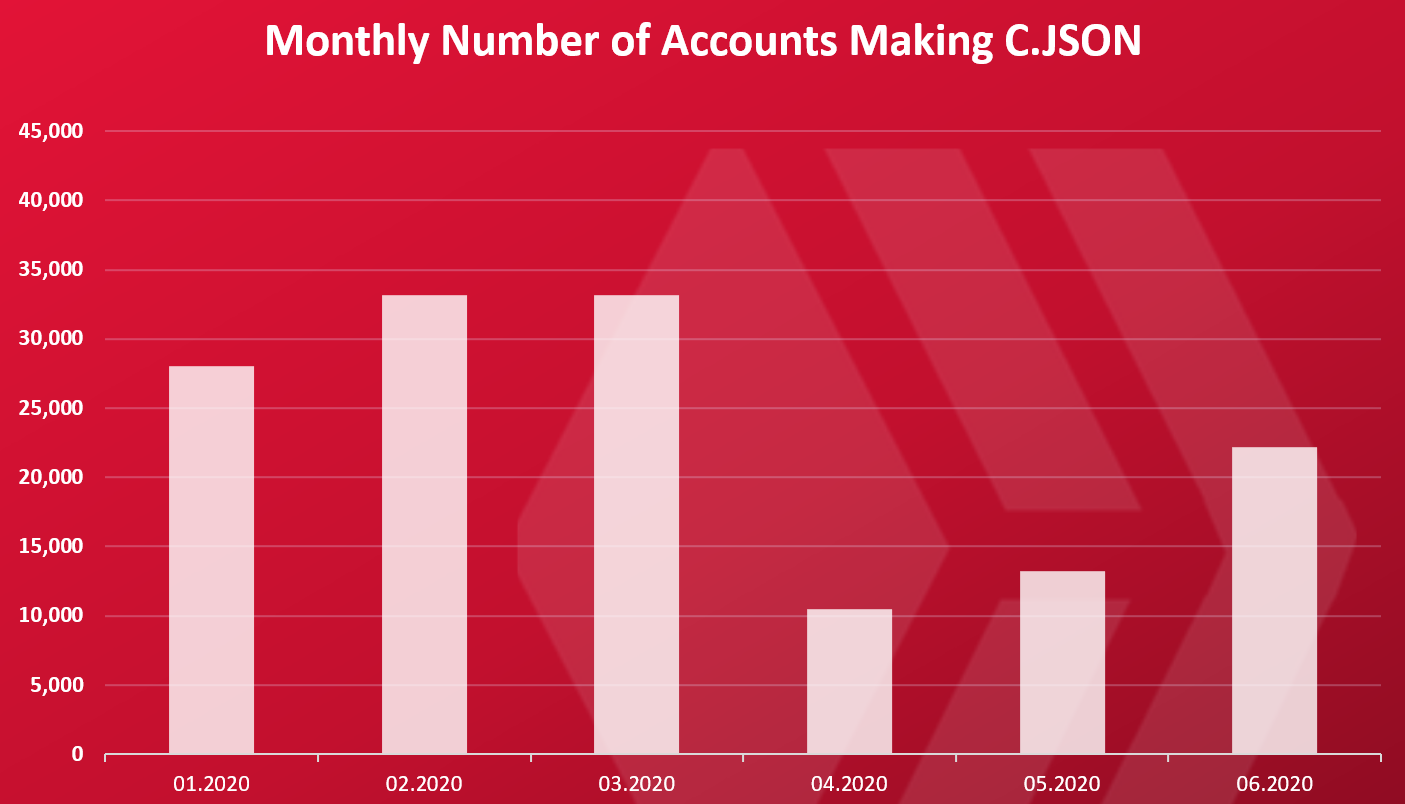 Here as well we can notice the drop in the numbers of MAU from more than 30k to a 10k after the HF, and then a increase to 22k accounts in June.

Now that we have seen the breakdown in account making different activities, lets take a look at the overall active accounts.

First the chart on accounts by operation in June 2020. 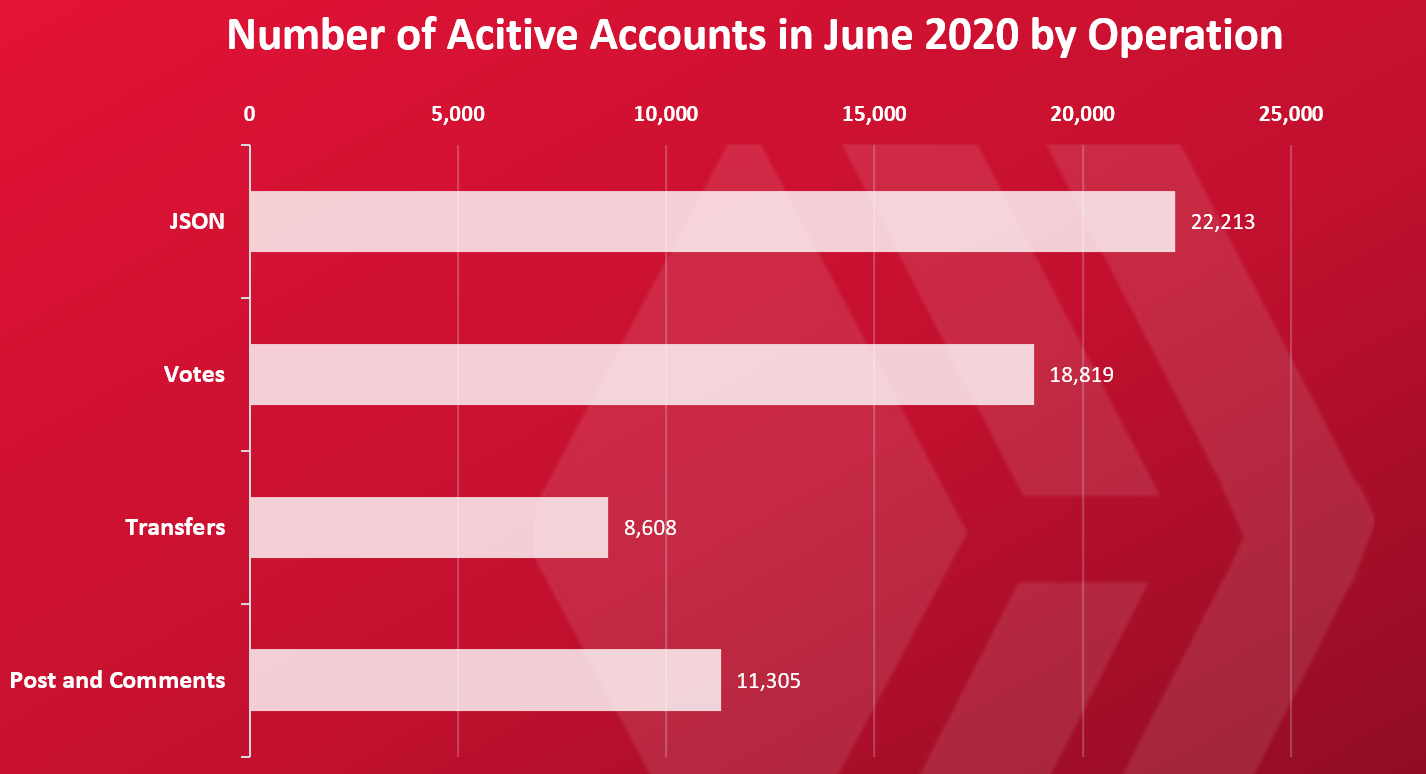 Note here that posting usually requires a bit more effort than the custom JSON operations, that are a once click operation. This need to be considered when comparing the numbers of accounts by operations.

If we combine the above and make an overall number of unique monthly accounts making one of the activities above that number for June 2020 is 37251.

Since the main dApp build on the Hive blockchain is a blogging platform the obvious question is how many readers it has. The numbers presented above are about authors, curators, gamers, etc… users that actually interact with the blockchain with some action.

The number of readers is not stored on the blockchain. The interesting thing is that there is more than one frontend to the blockchain, no there is no one single point of entrance to count.
According to https://hypestat.com/ the hive.blog web has around 104k unique daily visitors. Peakd.com has around 68k. The others interfaces and tribes have some more. Some of them may overlap but I would give a rough estimate of 150k daily overall daily visitors. Have in mind this is very rough estimate.

At end I would also like to note that the user base above is highly engage and active. Not just a crypto telegram group with 50k members 😊.

Interesting info as always!
thanks for sharing!

Thanks for the nice words!

This is very accurate data

This data is very helpful to see, compare to facebook and twitter we are tiny tiny tiny small but in the subject of cryptocurrency or blockchain we are one of the top of the game for most active chain just like Charles of Cardano said. Thanks

After 4 years it's contracted in both user numbers and rewards. So where does your optimism come from?

Do you really believe this has life or do you just accept the cult demands positivity?

LOL well the crypto telegram didn't cost that much to set up. Maybe that's also a good point, HIVE doesn't have an IM, it should actually be looking at that instead and pulling users from discord and telegram into a HIVE IM that integrated with HIVE, kind of like Messenger does for Facebook

Cheers, and love for sharing the amazing work. Usually, large blobs of charts would bore me, but you've somehow made it fun to read through it! I'm hoping to see more users hop onto the Hive train, and I've noticed loads of people getting onboarded. Pretty incredible effort from those onboarders!

The next step would be to get more engagement, and to encourage users to be more proactive. Overall, certainly a whole lot more fun that how Steemit's doing right now. I log-in every now and then to see if anything interesting is going on there. Haven't found it yet... :-D

Some of them may overlap but I would give a rough estimate of 150k daily overall daily visitors.

This is a very interesting conclusion. I realize it is just an estimate but it gives us a ballpark baseline to consider.

Still very small in the realm of the Internet but something to start building from.

Thanks for another terrific report.

Nice statistics.. hope to see a serious rise in the next three months

What is your definition of
Engaged and Active?

I see here a football field with many kicking a ball around. Sure some may cross into the net region. But an actual game of said sport, with top management, that presents itself as a successful and winning team.

Many others do the same.

But that's essentially "behind closed doors"
I'm taking about the element that stands out to anyone observing this.
Zero comments on most posts and also those reports show that you, despite what you do, and despite doing it with your friends..
Are the exception.

Yet you all try to find new ways to "onboard masses" but not one person wants to admit that this is THE flaw of this place. It's also something that just does not say "this is future of social" or "future web 3.07"

That's why it's a cult.
Once committed.
You don't know what reality is anymore.

I think you are exaggerating with your cult talk.

Each crypto has this tribalism so to speak.

I don't know where hive is going or what is the future for it. I have not claimed it to know. Nobody can tell that... it may be gone in a year. The same goes for Bitcoin.
It also might be up x50 in a year.

What I know is that I have been more than 4 years in crypto, and at the beginning, not on hive/steem ... and this place somehow drag me into the rabit hole. That is certain.

This being said, since you seem to have an objective grasp of reality, please enlight us with your knowledge and perspective and explain what is the future of hive, bitcoin and all thing...

Also I'm not just about slapping hivers in the face with the negatives.
There's much positive in community here.
But the ideas for improvement are lacking creatine thinking. The Twitter initiative for instance. Poor attractor. Nothing more.

I have ideas that could put hive on platforms like tiktokv and Instagram. It doesn't involve promising 1 cent rewards. It's about expose of talent here. Not at all about money but recognition, which then makes the platform worth investing in.

Because see I had high hopes for steemit. Wanted to add content but after researching and realising.. I did not proceed. It was everything though. But then it wasn't.

Reality too is I see 2024-26 as when Blockchain will go critical mass.
The systems at present aren't ready for mass. So the ideas are pointless to try push.

Internet and virtuality if only just getting started. This here isn't the next gen.
It's just a fun thing that can make you some money. If you're a shark can make a lot. Masses here sardines though. Which is why sharks feed well.