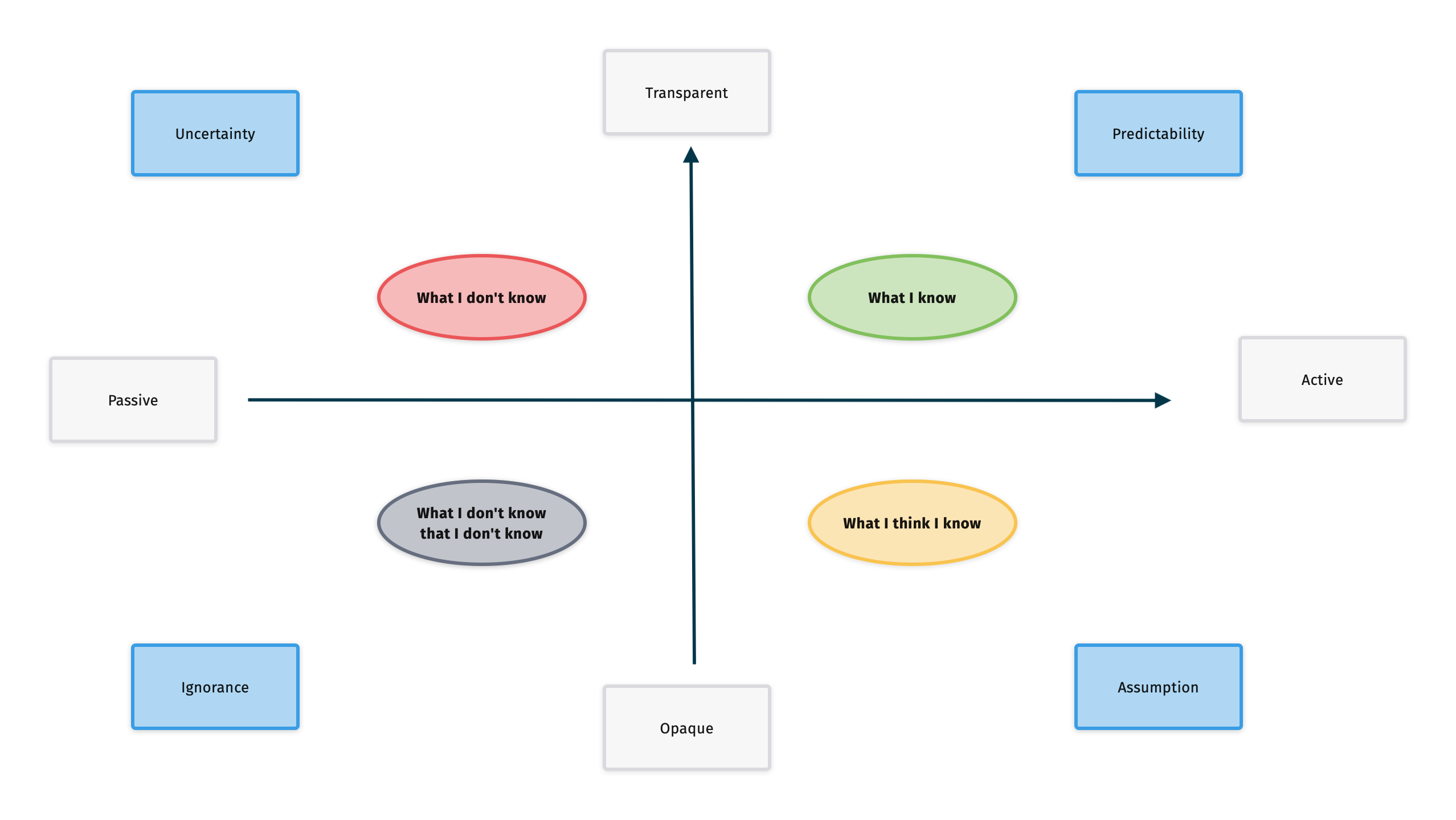 There’s something about maps that appeals a lot to me. They convey in a very simple and concentrated way information that otherwise would have needed thousands of words to contain. I get a particular feeling of clarity when I’m able to put into four quadrants the most important parts of a topic, and start describing the relationship and dynamics between them (btw, I already did this for productivity and money, feel free to have a look at those maps too).

Today I decided to put together a simple one about knowledge. Or, as the title implies, about the lack of it.

The 4 Levels Of Knowledge

Although the title of the post is about stupidity, I will try to describe it, in the beginning, from the opposite perspective, by contrasting it with knowledge. There are 4 levels of knowledge:

Let’s take them one at a time.

What I Know – Predictability

The things you know create predictability. Your understanding of processes, actions, relationships between objects and actors, all this is clear to you. Whenever you act from this space, you expect the results of your actions to reinforce what you know – in other words, to be predictable.

For example, you know how to read in English, that’s why you’re able to understand what I’m writing now. This is clear and transparent to you and you can easily engage in English conversations. It will always be recognizable to you, predictable.

What I Think I Know – Assumption

The things we think we know are those that, once tried, aren’t always predictable. We don’t get the expected result all the time, but we do get enough of a positives to assume we kinda know what’s going on.

For instance, we may think we know how to trade cryptocurrencies. We assume that, we engage in this activity, but, in 99% of the cases, reality contradicts us. We get less predictability, because we overestimated what we actually know.

What I Don’t Know – Uncertainty

Whenever I’m faced with a situation that I don’t know how to handle, I’m experiencing uncertainty. There’s no way to predict how things will turn out, so I’m completely in the dark, and I know it.

For instance, I know that I can’t speak Japanese. I tried to understand it, by watching videos in Japanese, and I got zero predictability, it was all opaque to me. So I am aware that I don’t know Japanese.

These are the things that I’m not even aware that I don’t know. We usually include here serendipities, coincidences, bad luck and everything that we can’t conceptualize yet.

The Bottom To Top Dynamic – From Opaque To Transparent

Things are getting even more interesting when we start to look at the dynamics between all these quadrants.

So, whenever we advance from the bottom of the map to the top, we increase transparency in our lives. Our surroundings are getting more predictable, we “see” better.

On the right side of the map, we move upwards from assumption towards predictability. The more we verify our assumptions, the more we learn.

The Left To Right Dynamic – From Passive To Active

There’s also a left to right dynamic, in which we increase the level of action we can safely perform. By “safely perform” I mean action that is predictable and doesn’t lead to the end of our lives.

When we advance from the bottom left part (ignorance) to the bottom right part (assumption) we start formulating theories and generate a feedback loop. We go from not knowing that we don’t know something, to believing that may actually know a little bit.

The Most Important Part Of This Map

Now, that we have some basic understanding about how our knowledge (or lack of it) works, I will leave you with the map designed at scale (the circles being drawn in direct correlation with the amount of time we spend in each quadrant).

We operate with a very limited set of predictable actions, our actual amount of knowledge is very small.

We have way more topics on which we pretend that we know what’s going on (which are just assumptions) and we can all agree that we don’t know way more things that we actually know.

We live in a state of opaqueness (the world is still a mystery to us) and passivity (we’re moving in a very limited circle, where we can have just enough predictability not to die – and even that is not a given).

This should, in theory, make us humble and open to discovery. Should make us thrive to move more and more upwards, to transparency and predictability, but instead, we tend to inflate the 3 smaller quadrants, exaggerating what we already know, pretending to know more than we actually do, and minimizing what we don’t know yet.

And that’s why this map is called “the stupidity map”.

Brilliant. I haven't thought to map it out like that, but it makes a lot of sense; and these visual queues are easier to remember than a paragraph of words.

It was the best answer and yet a lot of people didn't get the clarity of the answer.

That was truly funny to watch, thank you for sharing! Was that a guy for real in the US public administration or just a stand up comedian/actor impersonating an American public servant? :D

Donald Rumsfeld. At the time, the US Secretary of Defense.

Oh, I see now, thank you very much for the clarification! I really appreciate it! :D

Wonderful mind maps, thank you for sharing them! Also, congratulations on another brilliant and very well written article! Keep up the good work! :)

Also, if I may, I'd like to complete this in the comments' section with the following eloquent comparison: 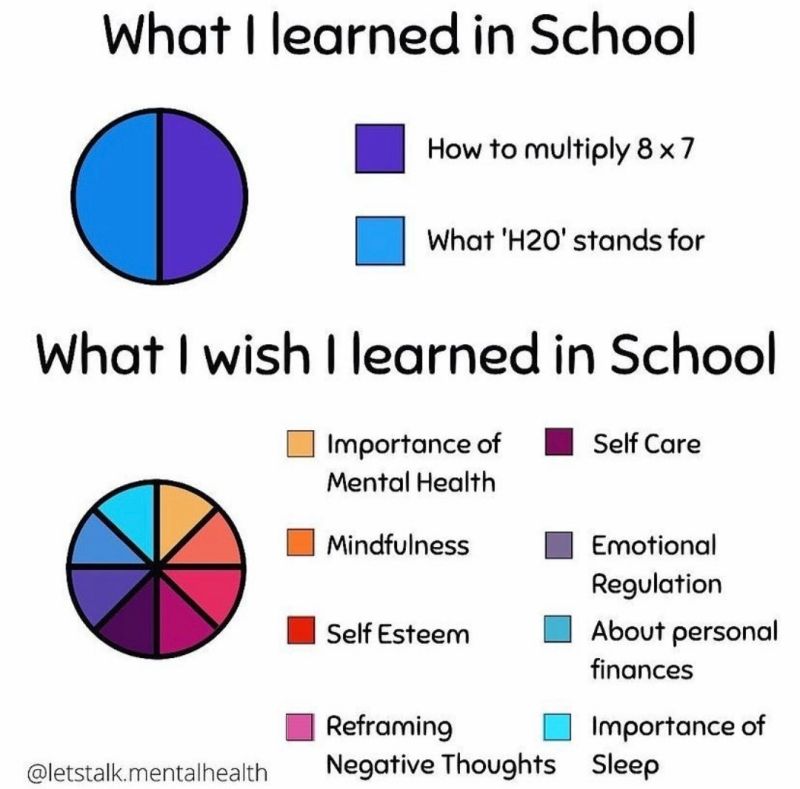 The sum up of a rigged educational system worldwide. Image source: Pixabay.com
$0.00
Reply