Let me start with a story.

About 5-6 years ago I signed up for my first 48 hours race. It was held in Athens, and it was my first ever event of this type. By that time, I already completed a few over 100km races, and one over 220km, so I was relatively confident.

Alas, the unpredictable spring weather spoiled it for me. It was March and I was expecting temperatures above 12 degrees Celsius during the night, but somehow we ended up with 3-4 degrees. I got hypothermic in the first 24 hours, and had to stop multiple times to rebalance my body heat.

By the beginning of the second day, I was only 100km in, and my dreams to reach 300km were destroyed. I did continue to run, just to see how much I can do, though. No goals, this time, just battling fatigue and crawling forward (I finished with a decent 204km, but that's not important in this story).

At some point, with about 3-4 hours before the end of the race, I noticed something happening at the referees table. The course on which we were running was a very narrow ellipse, 1km in total, on which we rotated hundreds of times. We were counted when passing by the referees table, where there was a measuring carpet, talking to our chips.

Parts of this ellipse were irregular, and there was a gate somewhere in the middle, linking the ellipse parts, sort like of a Mobius band, but it was closed. Well, turns out that one of the runners, in a desperate attempt to bank in more kilometers, was cutting in. He was stopping around the gate, pretending to tie his shoelaces or change his teeshirt, and then, when nobody looked, he squeezed through a hole in the fence around the gate, coming on the other side of the track, cutting nearly half of the lap.

Referees started to wonder how someone can make 4min per kilometer after running more than 40 hours. Of course, nobody could, so they stopped the guy, took his chip and told him he can do whatever he wants. If he wants to finish the race, whatever, but he won't be counted in, he was disqualified.

(If you made it so far, thank you. It's only now that the story becomes really interesting)

The guy decided to continue the race (after loudly challenging the decision, of course) and, to our enormous surprise, continued to cut through the gate, like no one was watching. There were only a couple of hours left, so nobody paid attention to him anymore.

I still remember the absurdity of the situation, even 5-6 years later.

I confess that today, this memory was triggered by an article I just read on coindesk. According to that, Justin Sun (remember him?) tried to game the Compound protocol. He borrowed a large amount of Compound tokens, sent it to Binance, then, somehow, the same amount comes from Binance to another wallet, which tries to promote a governance proposal in Compound involving TUSD (Tron USD, Justin's stablecoin). Nobody can actually prove it was Justin, because cryptography, and privacy and etcetra, but everybody knows it was him.

The article above also points out that Justin tried a similar approach with AAVE recently, but it somehow omits what Justin did to Steemit, a little more than a year ago.

When Justin Tron bought the largest stake of tokens from Steemit, he tried to gain control of the network, by spreading that stake across the top 21 witness positions. Also known as a PoS sybil attack. Of course, he didn't succeed, the most important part of the community forked into Hive, and that's how you can read this article today.

Old habits die hard. Fixed patterns are surfacing over and over.

Some people said back then that we were overreacting. That we shouldn't cut Justin stake.

But he was already disqualified when he did this the first time, on Steemit. Now he just runs all by himself, and nobody really pays attention to him anymore, just like the poor guy who was still gaming the race, long after he was out of it.

Photo by Casey Horner on Unsplash

This is a good lesson to learn from and it shows how people try to game the system and others that are in it. For some reason, I feel that with the Hive fork we might have gotten ridden from many of such users, even if some might still exist around. I think communities are filtering these kinds of people pretty good and without communities (unless you are a whale) you cannot grow too much... 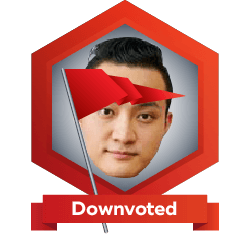 "No honour among thieves", one ends up only cheating yourself, notice same band of brothers going around eventually people recognize 'trade mark', then leave well alone hopefully.

How could they not include the back story of Jutin Sun's hostile takeover of Steem.

It's literally what makes him continuing to do things like this significant.

I thought he is an ambassador now why he is still trying to play all these silly games? It's funny though and he will keep losing money.

It is dangerous to deceive people, because in the end you begin to deceive yourself.when a person completely indulges in lies, the mind and talent leave him.