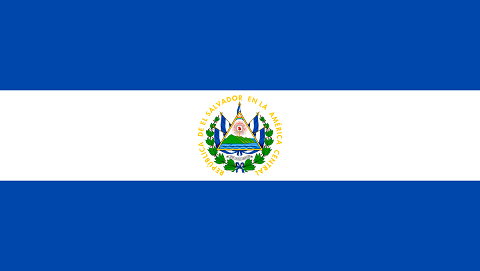 No I had no idea until just now that El Salvador actually passed the law to make Bitcoin a national currency with a supermajority vote. That's insane... I was thinking it surely wouldn't happen; such a pipe dream. Memes make dreams, friends. 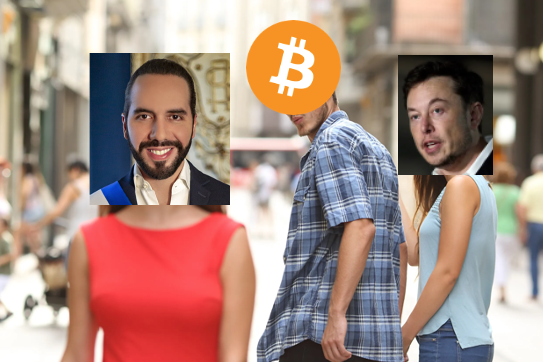 As the Bitcoin crew continues to slay Elon Musk on social media, everyone is now looking to Nayib Bukele, Presidente de la República de El Salvador. Seriously, so weird. No one gave a shit about El Salvador last week. What is that? A country? Now with some political maneuvering they find themselves in the middle of the emergent open source economy ready to hit the ground running. I’ve just instructed the president of @LaGeoSV (our state-owned geothermal electric company), to put up a plan to offer facilities for #Bitcoin mining with very cheap, 100% clean, 100% renewable, 0 emissions energy from our volcanos

He's even leaning into the whole green energy debacle like a champ. What a pro. Once again, we see how Bitcoin leads the charge in Green Energy as I've stated multiple times. This allows El Salvador to turn their volcanoes into a valuable font of energy that can be turned directly into digital currency and secure the Bitcoin network at the same time... insane...

On top of that madness, it means that energy is going to be dirt cheap in El Salvador because all the infrastructure is paying for itself and none of the resources are going to waste. Again, legendary, as predicted. Talk about a blow-off top.

You couldn't really ask for more bullish news than this. Now there are a handful of other countries in South America talking about doing the exact same thing: turning Bitcoin into a national currency. This is crazy! How did this happen so fast? The dominoes are dropping rapidly.

No amount of China/Russia/India/regulation FUD can counteract these developments. Soon™, Bitcoin will officially be a foreign currency, and when that happens things are going to get very awkward. 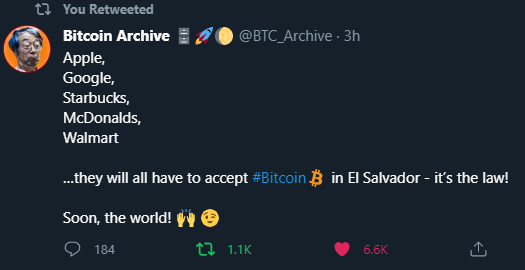 This is getting serious.

Think about it: legal obligations to accept Bitcoin as a national currency. Bitcoin is a borderless technology. Once a company has the infrastructure that accept Bitcoin in one country, they can immediately roll that out to every country they operate in, for free. That's some pretty wild developments if you ask me. Things are moving quite quickly it seems.

Another thing we should all know about Nayib Bukele is that he was elected OUTSIDE of El Salvador's two party system. He was a third party candidate, and he got more than 50% of the popular vote. I feel like I shouldn't have to explain how pure flippin insanity that is by itself. This guy is clearly a champion of the people.

And so it begins.

As I've predicted many times in the past, the poorest most downtrodden nations will be the first ones to fully accept crypto for what it truly is: a superior form of currency destined for greatness. Many of these developments will be open-source, collaborative, and inclusive, meaning the value being built in El Salvador will quickly be copied and distributed across the other nations that also accept it directly as currency. Pretty wild.

At this juncture, it's pretty hard to imagine Bitcoin returning to the doubling curve now that countries/corporations are officially starting to embrace it as actual legal currency. This is the mega-bubble year, after all, and we find ourselves pretty much where we were in 2017 by percentage comparison. It's easy to see how this hype cycle could continue on to the real blow off top at $250k at the end of the year.

Wait for it, it's gonna be a doozy. Something tells me the weak hands have already been completely flushed. I expect $30k to hold strong. Might take a couple of weeks to get out of these woods, but who cares about a couple weeks when we still have 6 months to go?

El Salvador: my savoir!
Another thing we should all know about Nayib Bukele is that he was elected OUTSIDE of El Salvador's two party system. He was a third party candidate, and he got more than 50% of the popular vote. I feel like I shouldn't have to explain how pure flippin insanity that is by itself. This guy is clearly a champion of the people.

You humble me Señor Edicted.

Wouldn't be ironic that a little and poor country like El Salvador would save us all with a well thought politic of infraestructures and technology?. Could be really our saviour like the spanish name suggests. I've to see it done though, I'm too old to be naive about this, Bukele isn't a man I would trust too much.

The president of El Salvador is really giving me joy right now, this is actually showing a big step for cryptocurrency to be recognized in the whole world as medium of exchange and reduce that monopolization of fiat money.

I agree, this is a big step for cryptocurrencies

all of salvadoream people are in shock except some like me that
are in cripto from some days ago.
well it is time to hold on with strong and diamond hand because this grown very fast.
here we go.

It just feels like they haven't thought this through at all. I just find it all really really weird. Everyone with lazor eyes on Twitter? like wtf that is not a good look for digital currency.. Now they are building a volcano mine while Chinese miners being kicked out, Elon going on about clean Bitcoin mining etc. I just dont buy it at the moment, it all seems so staged and phoney and weird, all of it the whole thing is just weird and like a weird global agenda going on here. Talking about global tax system at the moment, they are laying the groundwork here for sure and to me it seems proof of a global network type conspiracy. No one country is sovereign they are all in on one agenda it seems.

The best thing i can think is they are trying to clean up Bitcoins image to the world. There wont be any claim of dirty Bitcoin anymore for the environment or as money for dodgy criminals. China news today arrest 1100 for money laundering. The exchanges like Binance are going to get hammered soon, watch for the news. This IS a conspiracy to clean up Bitcoins image probably in preparation for the likes of Amazon and Apple and the major entities embracing Bitcoin without tarnishing their reputation. An ETF is almost certainly around the corner. Rogue exchanges will not be tolerated, period.

It's hard to say what's going on, but it's pretty clear to me that the entire world is in clusterfuck mode.
It doesn't have to be staged to be completely absurd.
We've been building on top of this absurdity for decades.

It's like herding cats at the moment.
Everyone can see that the system is broken, and everyone is scrambling.
We are in power consolidation mode.

I like to think outside the box a bit more.
The cluster fuckery is deliberate, the incompetence is deliberate sabotage. The system as it was has worked for them up until now to steal wealth and the freedom they allowed as it benefitted them. The destruction of the planet everything as long as they suck wealth out of the status Qou. The music has stopped, we are now draining their resources and soon and no longer are they profiting from how things are.
The thing they fear the most is people not having any work to go and do and this is exactly what is happening. I could go on but its clear as day to me that yes this world is run in secret and it is a global agenda. No one country is sovereign its all a game.

Maybe the top 1000 most powerful conniving dipshit people in the world all got together and came to consensus about how to move forward and they all pinky promise they won't backstab each other along the way. It will be interesting to see how long that lasts.

Or maybe that never happened at all and the incompetence isn't incompetence at all and rather simply continuing on the path of taking short-term gains in exchange for long term fallout: the thing we've been doing for decades.

There are really more variables to this situation than could possibly even be understood by a single person. This is Chaos Theory hard at work. The simulation will continue.

When it comes to money, there is nothing that is off the table.

pretty sure it all started with Bitcoin Beach :)
and i'm proud to say that's my best friend's hubby who founded that project ;)
https://www.bitcoinbeach.com/

This is fucking huge news!

My only concern is that the president is more or less a dictator? People will use that to criticize crypto (the same old criminals narrative). I heard contradicting opinions about that and tbh I am not informed enough to have my own opinion about that part of the country.

Anyways, I love that guy for doing this. It will directly or indirectly bring more economic freedom to the country and its people.

I could imagine small countries follow suite. But doubting G20 nations doing it any time soon, specially USA and China...

Makes sense, but at the same time if China and USA had a lot invested in horses, you could say the same thing about cars: they won't adopt it as the primary mode of transportation. Which, of course, is ridiculous. DLT is a superior tech so they'll have to accept it sooner or later.

As a Chinese born US citizen. I surely hope these two countries can adopt it sooner than later. XD

For years I've been expecting Africa to straight up leapfrog the developed world in terms of innovation... and while I'm still very much expecting that, El Salvador came out of absolutely nowhere.

I hope that the world also takes away that progress happens when the two-party system is bypassed.

This is getting serious

My thoughts exactly. Yet even my brain can't quite grasp the significance of it and I've been involved in crypto since 2017. The implications are huge and so full of unknowns. A bit like the changes to the world the internet bought with it but, from this point, much faster and more fundamental. The mind boggles! 😱

awesome! It|s amazing to have a front row seat in this battle for (de)centralization.

Excellent post, i also made one about this news a few hours ago, you might be interested to check it out. This truly represents a huge step forward for the crypto world.

Small countries with an energy source will follow. G7 will clearly regulate the shit out of the rest of the world.

More countries will make the same proclamation soon. Even those who created the FUD will still follow. Crypto is the future and the future has started. Just keep hodling your position.

El Salvador to the moon.