Time to FOMO into CAKEPOP at the last second. 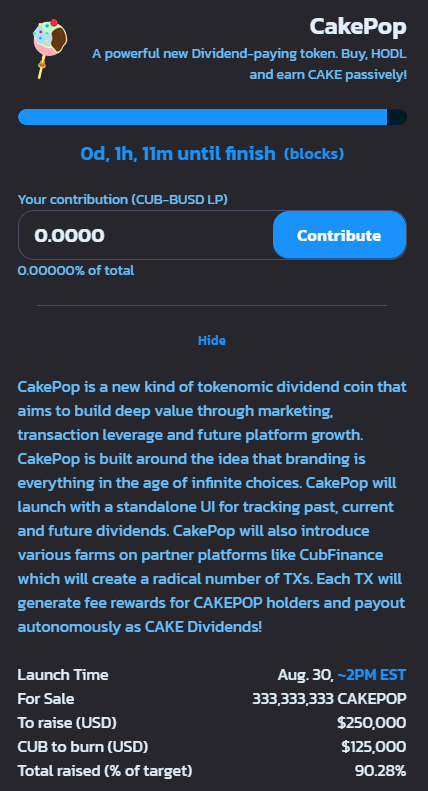 I have flip flopped once again, and have decided to participate in the CAKEPOP IDO based on three pieces of new information after my last CAKEPOP DECLINED post.

Odds of rugpull are near 0. We’ve vetted their contract (actually aided in its launch) so that attack vector is the only one that exists and is quite low.

That said, this is a very internationally focused coin with a focus solely on TG pump groups like KittyCake

Also - their UI is based on KittyCake.app. They’re going for a clone of KittyCake’s 200x launch event. 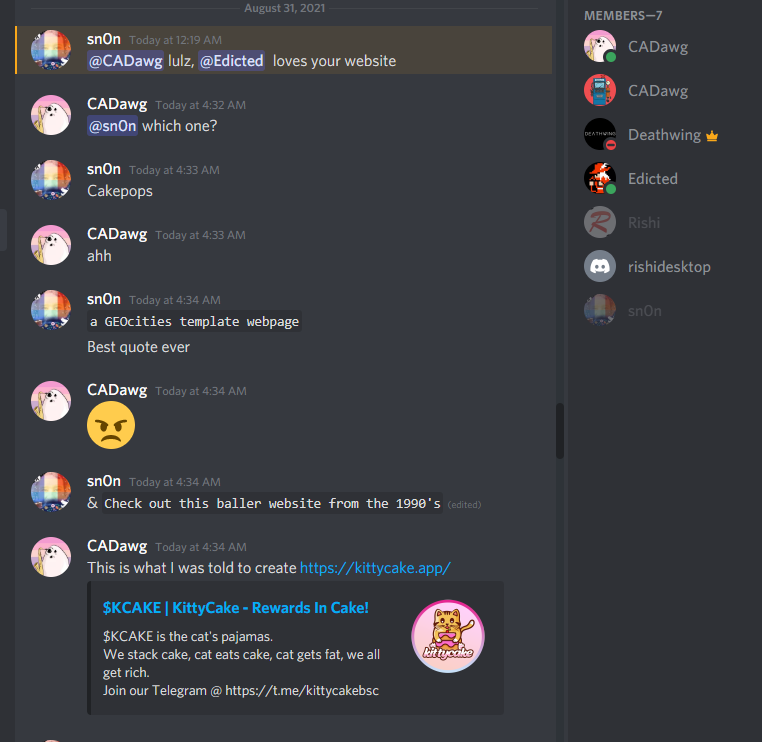 So apparently this garbage frontend was created this way... on purpose... by a dev I know personally... lol. Okay then.

Although I'm gonna go ahead and say the color scheme on kittycake is a bit less offensive. 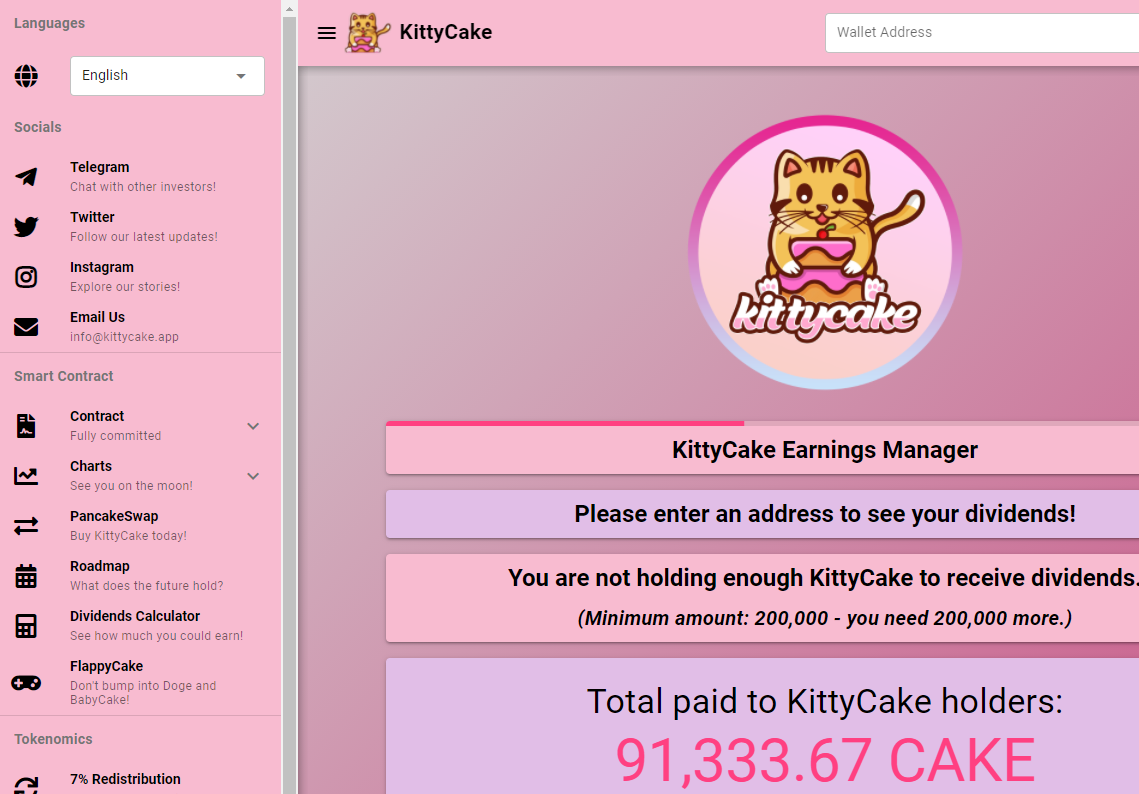 At the end of the day perhaps this entire process is a better reflection of my mental state and inability to make a decision. Is it really worth fretting over a possible rugpull when I'm risking relatively very little? Gah, not really.

At the end of the day Khal has never really led us astray, and even when we did get hacked we got a refund. I've already been burned three times by not being on the front lines.

And so it's time to FOMO in at the last second and reevaluate all this flip-flopping I've been doing lately. Piss or get off the pot. 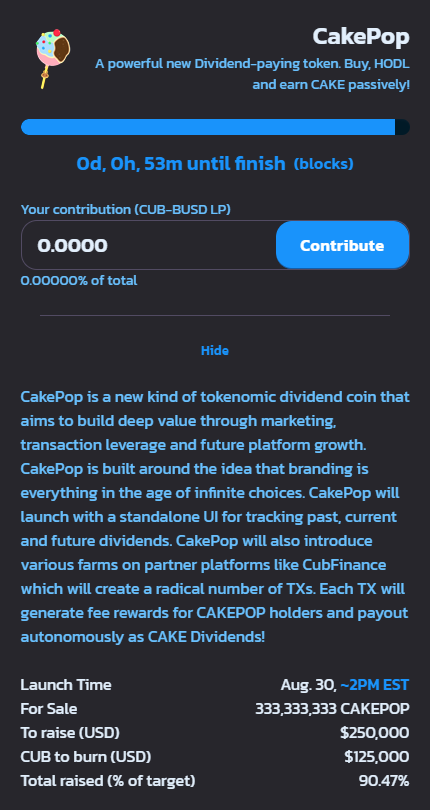 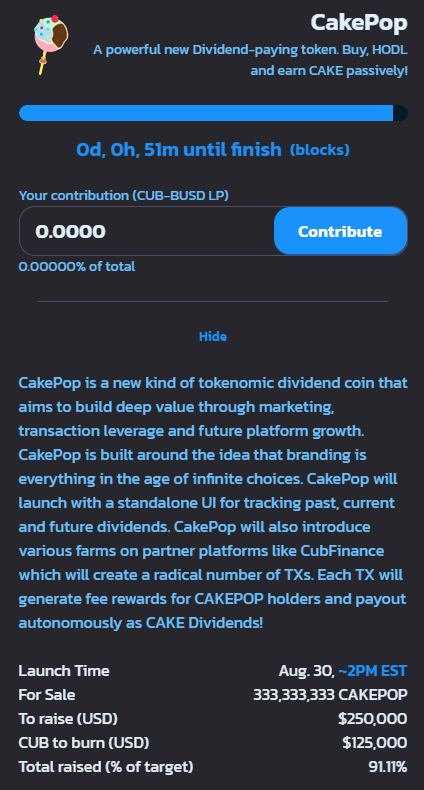 This will either be the best or the worst IDO I have ever participated in. I just got that feeling...

Hoping for the best for all of us.

Good luck! I'm passing on this guy but hope it works out for you, the purple whale and everyone else.

Actually I liked this IDO. It's quick but the stable price meant that there is no extra cost involved in FOMOing at the last minute.

Well you deserve a lucky break as far as early launches go so changing your mind is very much allowed. Let's hope it shocks all of us pleasantly

In as much as IDO and ICO are good ways to enter into a new project. I prefer buying the coin when it is listed in an exchange.

I only trust in rock nfts.

I didn't Ape in on this, the one time I don't I bet I will regret it. I'll wait to buy once launch and see how it goes.

YOLO has been my crypto theme lately.

I'm fine with YOLO, I just don't want to move into..

I'm saving all my dry powder for RUNE.