Is WAXP the same as WAX crypto?

forexbrokr (73)in LeoFinance • 3 months ago (edited) 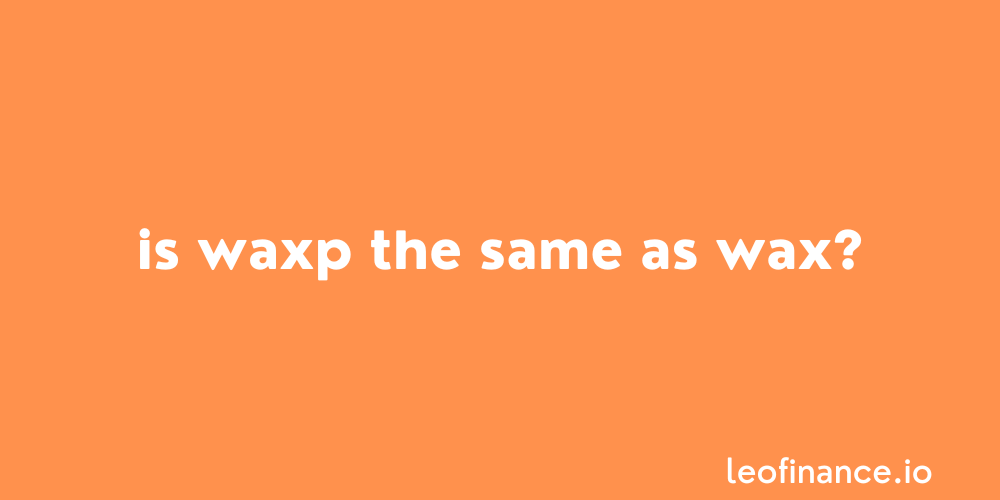 Yes, WAXP is the same as WAX crypto.

When I first started messing around with the WAX blockchain, this question around the token’s naming convention came straight up.

I thought I was buying WAX…

…so why the heck can I only find the WAXP token on my exchange?!

At the time, I actually felt really dumb asking the question - Is WAXP the same as WAX crypto?

But lucky for the rest of you newbie WAX explorers, I’ve asked the dumb question so you don’t have to!

Is WAXP the same as WAX?

The answer is yes, WAXP is the same cryptocurrency as WAX.

Technically, WAX is the native cryptocurrency of the WAX protocol.

But WAXP denotes the ticker name of the WAX token.

Well, do you see it yet?

Ah it’s so simple when you see it in front of your eyes like that, right?

So if you need WAX for resources when you’re just getting started, look for the ticker WAXP on your exchange.

Buy some WAXP and send it to your WAX wallet and stake it.

My story behind the question

With the answer now out of the way, let me share a little bit more about how I discovered WAX and why it came up.

I was first introduced to the WAX blockchain thanks to the GM:FRENS NFT project, born right here on Threads.

Worldwide Asset eXchange, or simply WAX for short, has certainly found a niche in making NFTs fun and accessible without all of the technical jargon and fees that are required to get started on other chains.

But the token’s naming convention is certainly not something that is straightforward on the surface.

As someone who is not new to crypto, but certainly new to WAX, if I couldn't immediately tell the difference between WAXP and WAX, then I know I won’t be the only one.

Hopefully this little guide can help a few of you out.

I just want to wrap up by encouraging you to check out the GM:FRENS project that I mentioned being the reason I had to ask whether WAXP was the same as WAX in the first place.

All you need to do in order to start earning GM crypto is to say GM to your FRENS by using the #gmfrens tag on the Threads microblogging platform.

If you’re anything like me, once you get some free crypto for nothing more than saying hello to others in our community, you’ll quickly find yourself lost down the WAX NFT rabbit hole, buying and blending NFTs until your heart's content.

PS. I know there are a few of you who are interested in getting started on WAX, but have just never got around to setting up your wallet.

If that sounds like you, jump into the comments section and let me know.

I'll be happy to pay your 5 WAXP fee (remember, it's the same as WAX!) for creating a new WAX wallet address.

Just gotta send me your unique memo from that tutorial 🙂.

I have wondered this in the past. Heh. Thanks for the post.

I knew I couldn't have been the only one 😉.

I ever thought the same question. After I tried to send 1 wax from my wax wallet to binance, I know waxp and wax are the same one 🤣

It's always a smart idea to do smaller, test transactions like this when you're not sure 🙂.

Wax is an underpriced blockchain like Hive. It is the epicenter of play-to-earn games. I have a Wax account. I played Alien Worlds for a while, but I wouldn't say I liked it. Nothing compares to Splinterlands.

Alien Worlds calls itself a game... but it's really not haha.

I was confused about that when I was first on WAX but I quickly learned about it. It's weird but I wonder why they didn't go with just WAX.

It would have saved us all some confusion, right?! 😂

Yea it does. It makes it tough for people sometimes since every chain is kind of different. I feel like it's a hurdle for new people entering the space.

the link to the GM:FRENS site has "https://" twice so it is broken ser

Helpful post. Same as Ether $ETH cryptocurrency and the Ethereum blockchain. But calling it Ethereum is still okay. Probably the same with XRP (Ripple) and other cryptos out there.

Yep, other great examples that I can remember confusing me in the past.

Especially the Ethereum/Ether one when talking to crypto snobs that corrected you when you got the terminology wrong haha.