WAX vs EOS - Battle of the EOSIO blockchains

forexbrokr (73)in LeoFinance • 2 months ago 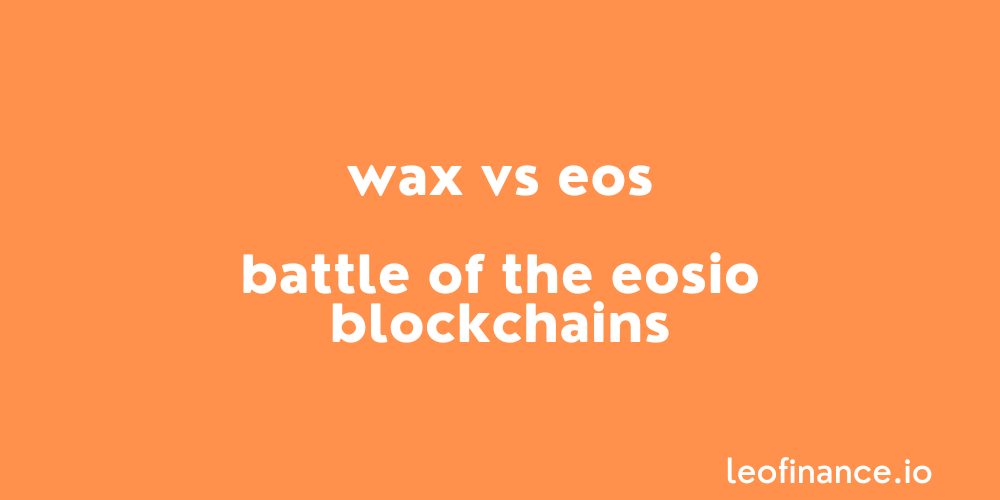 When it comes to making a head to head comparison with another blockchain, WAX vs EOS is the obvious choice.

Whether it's fair or not, the fact that WAX uses the EOSIO software at its core, means that the two will be forever linked and compared.

This is just reality.

With that in mind, this section of our WAX crypto guide actually takes a different approach.

Showing that WAX and EOS are in fact on the same team and no longer should be pitted against each other in this way.

Let’s dive right into the section.

WAX and EOS are actually now working together

While I’ve teased pitting the two EOSIO blockchains against one another in this section of our guide to WAX, they're really no longer rivals.

As key members of ​​Antelope, a community-run blockchain protocol, EOS and WAX (alongside the other minor EOSIO players) are actually working together.

If you’re truly looking for a battle, then this isn’t the place for you.

But if you're instead looking from a crypto industry advancement point of view, anything where a community takes control of a project from their bazillionaire VC overlords (bye Bock.One), should be celebrated as a good thing.

And this is exactly what we're saying play out here.

What is the Antelope Protocol?

Earlier this year, WAX and EOS (along with a string of other blockchains running EOSIO at their core) came together to take control of the EOSIO protocol code’s development that underpins both blockchains.

EOSIO was essentially forked and Antelope, a blockchain protocol run by members of the coalition, was developed as a part of their alliance in its place.

The group as a whole is coming together to place emphasis on areas where their chains overlap, offering incentives that will accelerate the core protocol's development and thus benefit all.

It's important to understand that while there may be some similarities between WAX and EOS, they ultimately serve different purposes.

Each member of the EOSIO blockchain family, has their own focus areas and as such, aren’t really set to compete in the purest sense.

By joining forces under the Antelope banner, the future is bright for all!

Final thoughts on WAX vs EOS

So as you can see from this section of our guide to WAX crypto, there is no longer a battle of the EOSIO blockchain’s being waged.

Thanks to their coming together to form Antelope, they’ve both instead chosen to pool their resources and take control over their real enemy…

To this end, if you’re simply a user trying to decide between WAX and EOS, the best approach is to research the specific games and use-cases you’re interested in individually.

Then choose to focus on whichever network they’re based on.

The cool thing is that their shared compatibility actually makes it super easy to use any EOSIO based DEX to swap between WAX and EOS tokens in your wallet.

I’ve always said that the future of the crypto space is blockchain interoperability, not protectionism.

So why not get involved in both?

In the crypto space patnership is what make them thrive. But it's a good deal for eos am sure it will someday get back again to $5 ATH.

I'm much more bullish on WAX than I am on EOS itself.

WAX has a very clear niche and use case, in the NFT and gaming space.

EOS, even after all this time, still hasn't managed to carve out any sort of niche for itself.

Are they planning on merging the chains or will they still stay separate? I am a bit confused as to what will happen as I only have a WAX account anyways.

No, they won't merge and will always stay completely separate.

All this means is that they will work on upgrading and improving the underlying EOSIO software that they both use.

I have experience with wax, but hadn't yet dwelved on EOS as of now.

With such similarities between both chains, deploying the game collection i have on EOS too, would be something very easy to integrate/fork.

Although i am more inclined to pursue some development on HIVE first than on EOS, to be honest. I totally recognize the changes and the devolopment, the new team positions, and i like the road that is being paved. i use their open source python library, and honestly, even if it can be relatively easy for an experienced programmer to develop on antelope chains, some effort can be done to integrate and make the learning curve less steep for the developers on the making, like myself. And i am sure they will address it (despite having a whole bunch of GREAT infrastructure that improve the experience of users and creators alike)

Thanks for sharing your experience and goals from a developer's point of view.