BRD Wallet: There Is A Risk Of Losing Bitcoin And Other Coins When Upgrading To A New iPhone 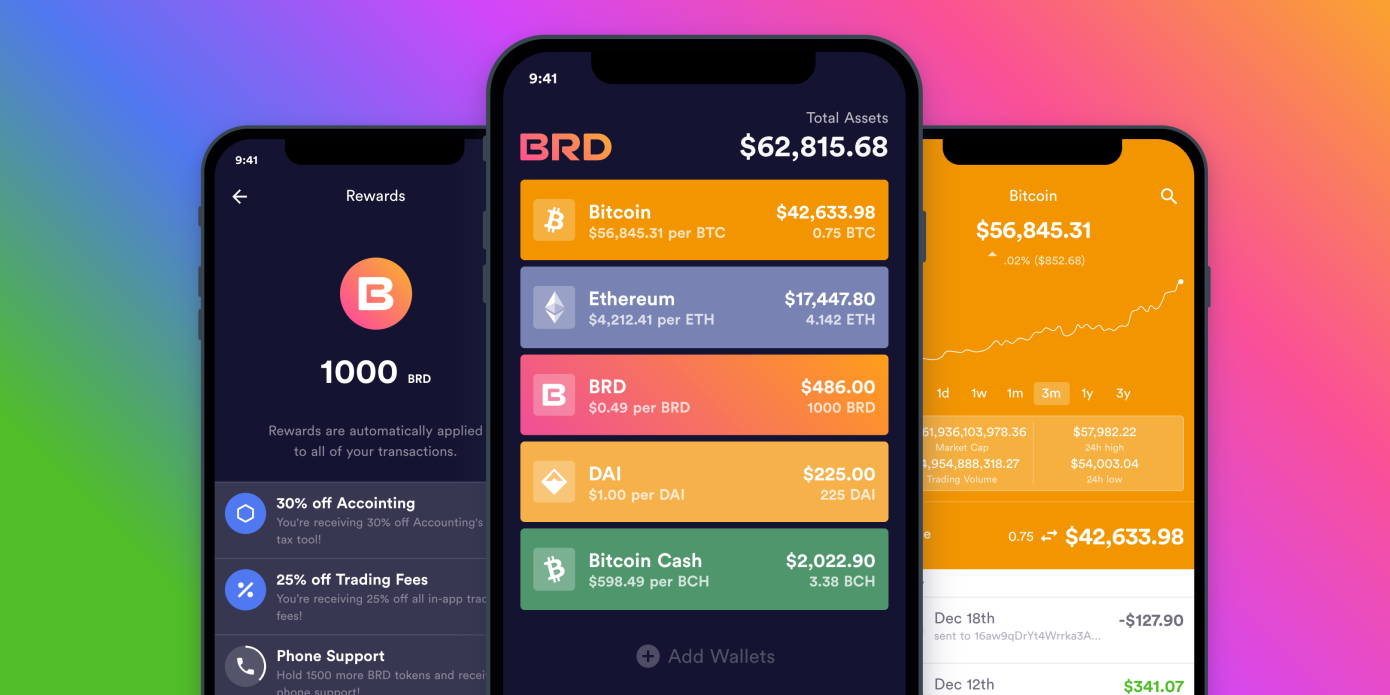 If you read my previous post, I mentioned how Hive was going to pay for my new iPhone. Due to Apple stores not having the latest iPhones in stores, I had to order it online. Finally, it arrived today. My first impressions of the phone aren't that great. It is big, it is heavy, and it is bulky. This is why I prefer shopping in person and seeing the products before buying. In this case I had no other option. I needed to upgrade for dual sim feature and improve the services with 5g. Other than that it is a decent device, and maybe I will get used to its bulkiness. I had a similar experience in the past too.

I started transferring data from the old phone to the new one. Apple devices are usually great in transferring data either from iCloud or from device to device. My understand was that state of the phone would be stored or saved somehow and all of that would be applied to the new device. The switch to the new phone would be seamless, I would continue using the new device as if nothing has changed. These were my expectations. But I still was concerned about crypto wallets and the assets I had stored on my phone.

Once the transfer completed, next step was to transfer the services. But right before that, the old phone showed an option to erase all data and prepare it for the new use. I almost hit that button, but something told me not to do that yet. And I wasn't in a hurry to put the old phone for use anyway. I am glad I didn't erase the old phone just yet. It turns out not everything is ready to go after the transfer process.

One of the important apps that still needed the old phone active was Authenticator that is used as 2 step verification for other finance apps like Coinbase. I tested Coinbase and other apps they worked just fine. I was able to import the Authenticator to the new phone. Then I transferred eSim to the new phone and inserted the physical sim for the second line. Tested. Everything works.

I realized the real risk of potentially losing bitcoin when I opened the BRD wallet. It didn't log me into my wallet. Instead asked if I wanted to set up a new one or recover existing wallet which required the recovery phrase. I have lost recovery phrases and secret keys for wallets before. I couldn't afford to lose this one. I knew I had them written down somewhere, I just didn't remember when I put them. lol.

I still had the access to the BRD wallet on my old phone. So, nothing was lost yet. But if I erased and restored the old phone to factory settings, this would create a very frustrating situation. Luckily, it didn't take long to find the print out of the recovery phrase. This experience taught me that I need a better system in keeping recovery phrases, and secret keys secure.

Finally, I was able to log into BRD wallet on my new phone. I saw the assets, and everything seemed to be ok. Then a pop up message showed up, saying there is an important update about BRD wallet. Well, if it is important, I should probably read it. 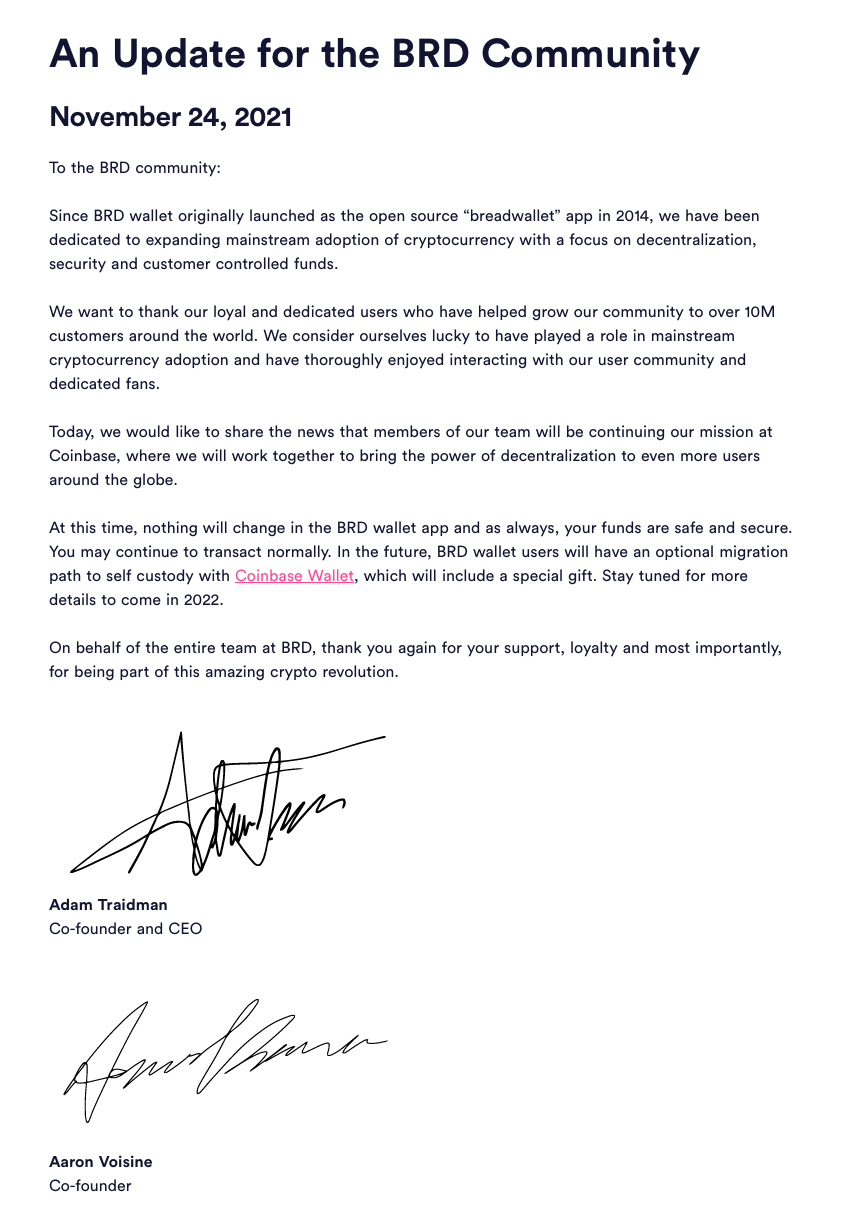 Great. BRD now belongs to Coinbase. The reason that I started using BRD in the first place was to move away from Coinbase and store my assets somewhere that only I have access to. I remember researching and reading reviews on various wallets and ended up deciding to go with BRD a couple of years ago.

According to the update above, it does look like they have plans of optional migration to Coinbase Wallet. What is the point of acquiring BRD wallet if Coinbase will be encouraging BRD users to move to Coinbase wallet? Is it getting rid of a competition. I don't fully understand. But hey, they will have a special gift for those who choose to migrate back to Coinbase.

I had a similar experience with XUMM wallet too. It asked me for a secret key to import XRP wallet. MetaMask asked for login credentials too. Trust wallet same thing.

I realized that keeping all the crypto assets and/or only access to them on my phone is not a good idea. Now, I had to make sure I can access these wallets in other devices too. So I decided to download BRB wallet on my iPad too. Funny thing is, BRD doesn't have iPad specific app. They have an iPhone version of an app that can be maximized by hitting 2x button. Remember the early years of the iPads? There weren't many apps developed specifically for iPad. So the the solution was to use apps for iPhone that could be viewed in small or 2x mode.

Those times are long gone. There aren't really many apps that do that anymore. This really surprised. A popular app with a decent team, wouldn't create a iPad native app? Anyway, I put in the recovery phrase, and it has been syncing for the last hour now. My balance still shows 0. I don't know how long more it will take to fully sync.

I will be looking for a new secure wallet. If you know of any please let me know in the comments. The wallet I need will primarily be used for bitcoin.

I was successfully able to upgrade to a new iPhone. No funds were lost, that I know of. The process did make me realize that there are significant risks involved and people can lose their crypto assets if proper security measures are not taken in advance.

Really nothing to do with a new phone, always need to keep copies of your keys safe.

BRD has always been considered one of the best or the best mobile wallets. Shame Coinbase will now own it. Consider something like a Ledger X with Bluetooth.

Yes, you are right keeping keys safe is the key.

When I first set up the BRD wallet bitcoin was cheap and I didn’t have much, so didn’t take keys seriously or worry to lose. It created more reliance on the phone over time.

I do need something like Ledger X. Thank you.

I will be looking for a new secure wallet.

I did see "self custody" part. They still will be able to track you.
And I don't like Coinbase and where they heading. They became another big tech.
My thoughts about them may change if/when they list Hive and start recognizing true decentralization. :)

Coinbase is one of my most favorite wallet and there is several security factor when changed device. For every new device they need to have verification and that is pretty impressive and good.

Encrypted usb, able to encrypt a vault file, then you email yourself the vault file. Nobody can open the vault file unless it is on a usb of the same type. And unless you delete your emails you are covered with an almost permanent backup that's encrypted with a password.

that is very interesting. I need to try that. sounds complicated though.

For wallets keys are really very sensitive issue. I prefer having my keys in drives that I never experience anything unexpected regarding keys. But its a good notice for us that changing device can be reason of losing coins, I was not aware of this, thank you @geekgirl mam for this helpful blog.

You have gained a rewarding experience that makes you smarter and stronger.

I was successfully able to upgrade to a new iPhone. No funds were lost, that I know of. The process did make me realize that there are significant risks involved and people can lose their crypto assets if proper security measures are not taken in advance.

Noted if in any chance I may find my self doing such. Thanks for the update.

Just get a ledger nano S or X for a secure hardware wallet, make a note of your seed phrase, store your Bitcoin safely and sleep well at night 😉

Yes, I will be buying one of them. Need to do some research first. Thank you.

Feel free to browse our website (The Bitcoin Manual) as a start point. We've been adding Bitcoin content since July to help people get started and are big on Bitcoin security - here's a link to our security page

This is very useful. Thank you.

That's quite the process. New phones always give me a lot of anxiety in terms of crypto and I pretty much only use Google authenticate on my phone, no wallets or anything.

My thought on a new wallet is a ledger device if you're not already using one. I see that someone mentioned that already though.

Thank you for the suggestion. Yes, I need a ledger device.

I would prefer Anroid rather than Apple. You are free in an Android mobile, but restricted in an Apple mobile.

Both are good. I am just used to Apple devices.

I am glad you stopped yourself from deleting your data. Do you know why it didn't move over the application data properly? Was all your applications other than crypto related fine?

Yes, most applications worked fine. Didn't even have to login again.
I think some apps recognize the new device and require to login or import wallets as security measure.

I always keep my keys on google keep that way I can recover it back even after a lost device or whatsoever, the real risk is loosing your phrase key I swear it can make you run craycray 😡

Congratulations @geekgirl! You have completed the following achievement on the Hive blockchain and have been rewarded with new badge(s):

Hey @geekgirl, sorry to jump in off-topic.
Your support for our proposal this year has been much appreciated but it will end in a few days!
Do you mind renewing your vote for 2022 so the team can keep up with its work? Thank you!
https://peakd.com/me/proposals/199 Congratulations @geekgirl!
You raised your level and are now an Orca!

Similar thing happened to me once before with 2FA for an exchange and I panicked really hard until I remembered the alternate details to get in 😂 Sad to see BRD go to coinbase, I havent used them lately, but I did for a while back in the day. Oh well.