#piratesunday: Another package from Nyssacat373 with my 2021 Tuvalu Black Flag Ching Shih 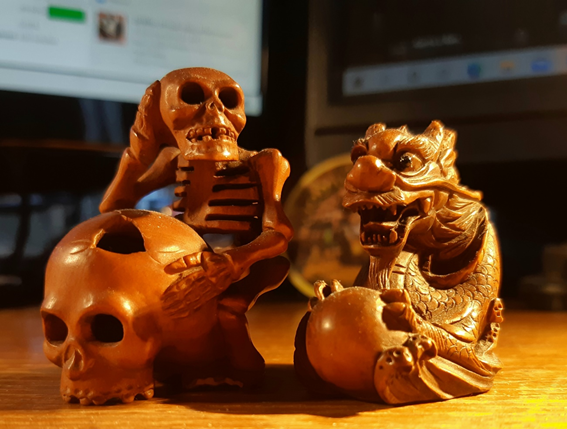 “Say Burt, we were expecting just a few coins from the old Boss, aren’t we?” His hollow eye sockets turned to his scaly friend.
The contemplative Inro Dragon nodded slowly, replies in his usual aged raspy voice, “I have seen this behavior before of Master Jiraya with the Lady Mishikara almost 200 years ago.”


When the release of the Perth Mints third Black Flag series coin was imminent Captain Nyssacat373 immediately volunteered to secure a pair of these for the Bloody Raven. There was no hesitation in his thoughts as he replied, “Done.” He had already planned to purchase this coin, so he’d simply add to his order. I paid him the difference for my purchase.

You see, Canadian buyers of bullion are at a disadvantage in choices of bullion products largely on an Economy of Scale, that is, the bullion market is comparatively small to the much bigger and diverse US Market. I can’t put a finger on it but it seems that the larger Canadian retailers indirectly avoid competing on price on certain bullion product lines. Let’s say, Perth Products. For example, Dealer 1 would put 2021 Kookaburras just as Dealer 2 would put the 2021 Koalas concurrently on sale, while Dealer 3 advertises 2021 Swans. Coincidence, conspiracy, or just plain survival? 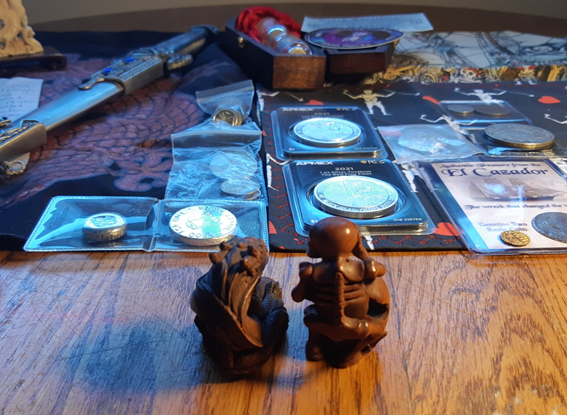 “Yes Burt-San.” Jin jin surveys the trove laid out before them and smiles, “He likes her.”

This by fate, led me to somewhat of a Stacking relationship with DrWho aka Nyssacat373, who had already showered me with such undeserved attention, volunteered himself as my Proxy Buyer in the rich US precious metals Market.

When the package arrived, it felt like far more than the two One Troy ounce coins I purchased. He did infer that it had something to do with Valentine’s day, but his personal letter went missing when the CBSA opened his parcel for Customs inspection. Another bone to pick with the CBSA.

On to the latest Perth Mint’s Black Flag

While I am pleased that Ching Shih is finally getting her spotlight in the west, at the same time the 2021 Black Flag: Ching Shih represents a significant departure from the trajectory within the series. As a stand-alone coin itself it is more than adequate of this remarkable historical persona outside of Western history. 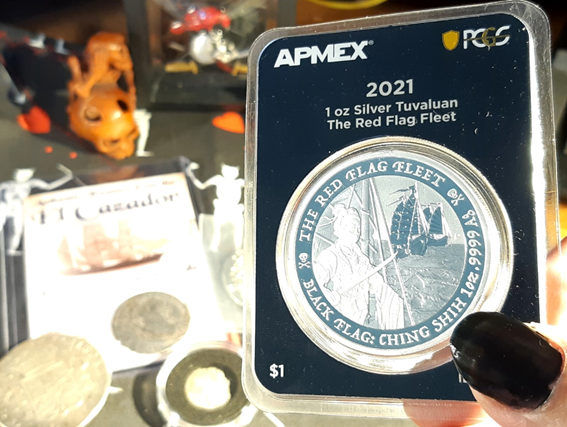 In my research of Ching Shih, I have never discovered details about her personal ship. If she had one. Culturally speaking most Chinese vessels were named to their owners rather than ships with their own distinct name. “Ching Shih’s Junk” just doesn’t sound fear inducing but Designer Eric Bowers could acceptably use the collective name of The Red Flag Fleet. Other than the legend the premise of the design then dramatically diverges. 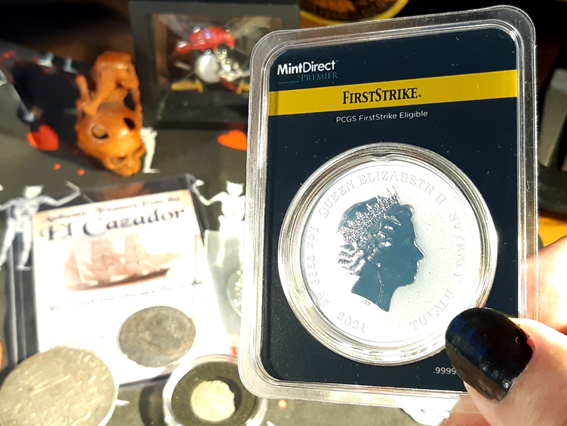 Rather than the emphasis being on the ships/ junks the emphasis is now on the Captain for the 2021 Coin. Ironically, there is no historically attributable illustrations or pictures of Ching Shih so Bowers would have to ‘make’ her up. Does she does bear some semblance to Hong Kong TV star Maggie Shiu who played the role of Ching Shih in the 2015 Series Captains of Destiny. You tell me, I’m not even a financial advisor. 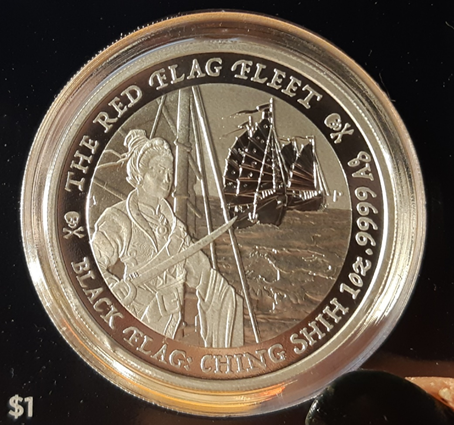 Personally, I think Ching Shih would best be a standalone coin so I would preferably like to see a consistent overarching theme on the Ships in the Black Flag Series. As to why Eric Bowers chose this design. We’ll have to ask him.

The Black Flag Series so far.

I was speechless when I unwrapped this special Mexican ‘Trade Dollar’ and date 1805 puts this square in the rise of Ching Shih in her career as Queen of the Pirates ended in 1810 and settling into a peaceful retired life running a Gambling house and brothel. 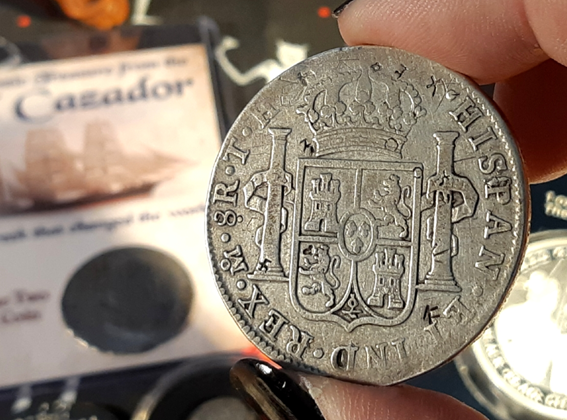 This marvelous coin has been in heavy circulation after receiving no more than 24 chop marks which is relatively low and may been circulating in a confined region such that the authenticity of this coin was in little doubt between merchants.

What is a Chop Mark?

Chopmarks are basically countermarks used by Chinese bankers and merchants stamped on coins as a defense against debased counterfeit coins. Chopmarks also signified that a coin's composition had been verified and that it was acceptable for use in trade. ~ Chop Marks Blog Spot 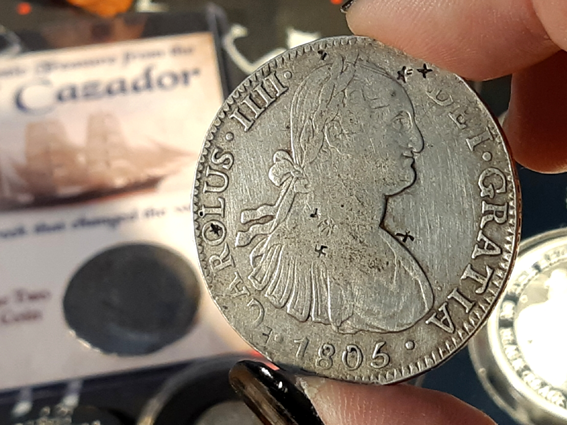 And the significance of this particular coin?

Chinese merchants came to prefer the “Carolus” 8-reales of Spain of 1772-1810. They called them “Four Work” because the Roman numerals in the king’s name CAROLVS IIII look like the Chinese character gong for work. But Charles IV passed away, and Spain lost its American colonies. New coins came from an independent Mexico. Even though the Mexican “Cap and Rays” coins were equivalent to the Carolus issues (27.07 grams; .903 fine), the older coins were preferred and commanded a premium. ~ Colin J Gullberg, Chopmarked Coins, A History; the silver coins used in China 1600-1935.

Oh my, what an awesome gift Captain Nyssacat373! Thank you 💋

Could the Pirate Queen of Canton, Ching Shih have personally handled this very coin?

Perhaps not but this is a perfect addition to my Pirate Money collection and a genuine historically significant piece in International trade.

This by fate, led me to somewhat of a Stacking relationship with DrWho aka Nyssacat373, who had already showered me with such undeserved attention

WOW, sis! A great coin that Black Flag, third of the series. I wonder what will be next. And O.M.G. an 8 reales coin! DrWho set you up good! What is a girl to do, hahaha. 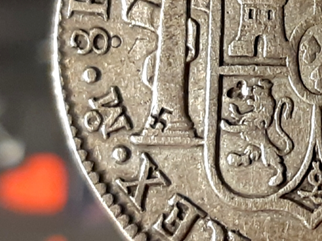 What's next? See that fuzzy background behind Ching Shih? Another Epic Historical coin! Not a Replica but a Reale coin from the famous wreck that changes the course of history. What did I say? "I do!" for the coin that is.

Reverse Swastika, Buddhist symbol but in this setting, representing a popular money changer's shop in the business district of Shih town. A manager was accused of using fraudulent weigh scales, an argument started, a fight broke out in the shop before spreading to the whole street knocking over a few fruit stands. Then things got crazy. 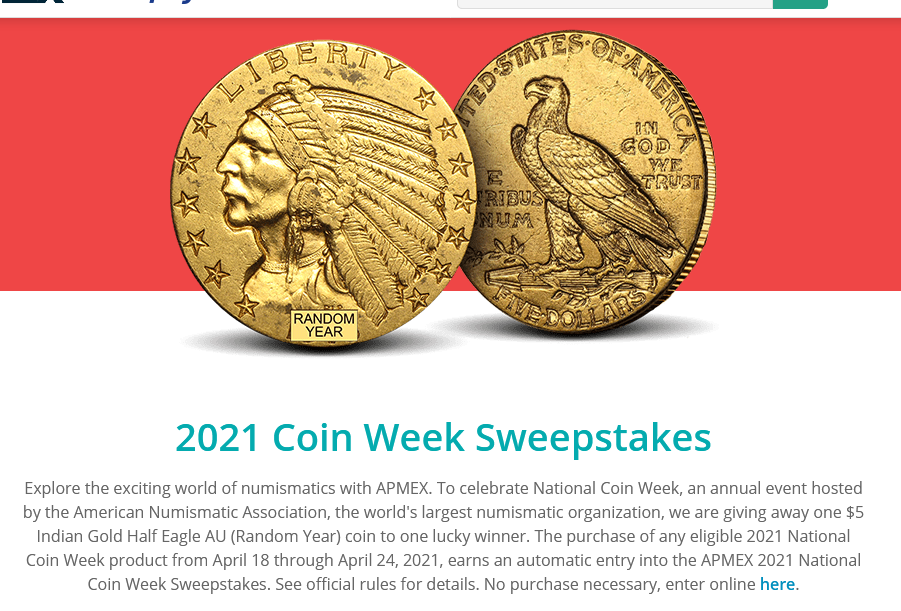 All Pirates may Want to Enter Online at APMEX to Win Some Gold For 2021 Coin Week @kerrislravenhill ...........
We Know All #PirateSunday Buccaneers Love Gold !!! 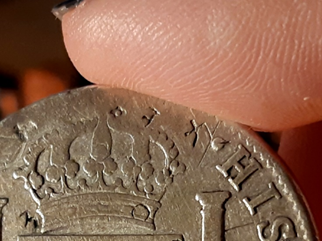 Why Thank you @stokjockey for the heads up. Passing vital Stacking information along is a principle of Bob the Pirate, Author of: Rich Pirate, poor Pirate.

Symbol of Nine, the pirate Bank of Shih town. Lots of guys standing around with swords and spears looking tough. We were required to have to get our silver approved here first before doing any commerce around the city. Damn bank fees!

Hi @kerrislravenhill, you were just shared some LUV thanks to @stokjockey. Having at least 5 LUV in your wallet enables you to give up to 3 LUV per day, for free. See the LUV tokens in your wallet at https://hive-engine.com or learn about LUV at https://peakd.com/@luvshares https://ipfs.io/ipfs/QmUptF5k64xBvsQ9B6MjZo1dc2JwvXTWjWJAnyMCtWZxqM 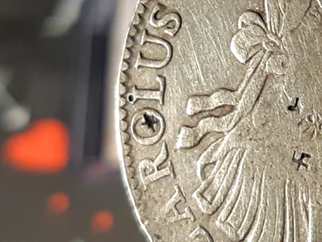 This week I have a peculiar way of replying in my comments @dswigle if you don't mind. As if telling a story in relation to the coin(s) and in context of the Pirate, The Bloody Raven and the Crew of the Storm Crow visiting Ching Shih's Stronge hold city.
You'd have to glance over the entire Comments section to get what I mean.
Thank you for Dropping in a comment.

The Mark of Ming; Ms Fu Yong Ming’s Tailored Silk Apparels, “Clothier of Queen Ching Shih” Claimed the Head Seamstress. Hundreds of bolts of bright colorful silk racked between exquisitely lavish silk outfits of her spacious emporium. Her fashion wares won’t come cheap. After thanking Ms. Ming for the complimentary cup of tea The Bloody Raven points to an outfit, “I’d like to order that in Black silk please.”

I actually think that's kind of cool the way you did that! 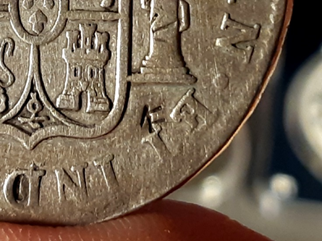 But Wait, there's more! Stay Tuned.
Thanks for dropping in @silverd510.

Asp Fu symbol, Long Wong's Grand Restaurant and Dim Sum. Order what you want as long as the price is right. "One silver trade dalla? Good for Long Wong's buffet for ten men, all you can eat, but first pay in full please."

Very nice @kerrislravenhill and with a bonus coin to boot! (yes, pun intended!). You have a very generous friend. Thanks for sharing your new treasures and have a lovely week!💜🤗 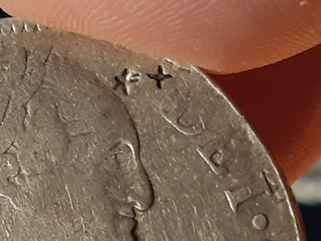 An 1805 Mexican 8 Reals! UnReale! These are not cheap coins and that's not all. These wer literally the reserve currency of the world at the time if you wanted to Trade with the Chinese. A lot more to come Sis. And I appreciate your comments @elizabethbit.
I just love to decorate the comments section with relevant pictures.

Symbol of Tein, Shih's Lucky Dragon Gambling house.
We weren't lucky enough and got burned.
"I tell you. I know that the dice are rigged!" says Mr. Vane.
Enter, the same tough guys from the bank. We want NO trouble here.

That is very odd that the Canadian coin dealers are a step behind the other dealers🤔
@kerrislravenhill do you think they have a niche market, and do this just because they can?
Awesome Black Flag Series you are collecting, and a bonus 1805 Mexico 8 Reales, how nice is that my friend!!🤗 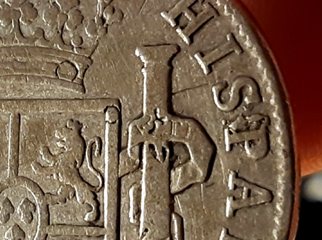 Each Retailer could have widely different Economics and business model so i can't say. I am not certian of the regulatory logistics by province let alone the Federal requirements of importing non-taxable assets form overseas that play a role in huge premiums in the final sale of bullion coins. Likely a combination of factors.
I will treasure your Comments @silvertop
More parts to this blog coming up! From the same package too.

I will look forward to the Continuing saga @kerrislravenhill!🤗

That trade dollar is fukn badass! Killer history with it 😎 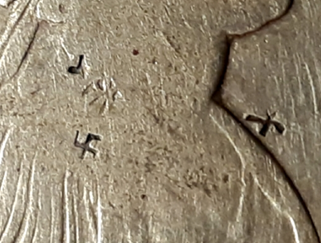 The West wants to trade with China and they accepted this Mexican 8 Reales most of all. The Chop marks gives the coin a little history or track record authenticating it to the Seller as genuine tender. IF only I had the time to do the research into some of what each Chopmark represents.
Lol! I'm decorating my comments section with Chopmarks! Thanks for dropping in @enginewitty ,check it out.

Reverse Swastika again, Buddhist symbol but in this setting, now representing and rebranded 'Honest Mah's' money changer's shop in the business district of Shih town. There was a great fight the last time. It was a huge party atmosphere, so we had to go again. I love this town!

One that almost looks like a swastica is somewhat intersting, curious who 'Honest Mah' was. Considering the size of the marks, I imagine they were intended only for those that knew about them. Funny, we were being tracked before all the tech 😁

A Character in my fictional pirate world of The Bloody Raven. Anyone using the 'Honest' moniker is often Not really honest at all and more a literary caricature. Lol! just check out the entire section of Comments to get a bigger picture context.

How'd I miss this? Oh, right, been busy.
Cute article!