So, you finally decided it's time for you to join in on the Splinterlands mania. Went out and got yourself a Summoner's Handbook and wow, a whole bunch of starter cards came with it. So with knowing nothing about the game, what do you do? Well, you battle but don't have a clue of what cards to use or where to use them. But you plug on and try, how hard can it be anyway? The result - LOSER! So, you try, and try again, and again, same result - LOSER! So you start thinking, maybe if I knew what these numbers and symbols on the cards meant I might just win.

No one can guarantee that you will win 100% of the time. The game is designed so that is nearly impossible. But in this section of the DEC Coin Guide let's investigate what the numbers and symbols on each card mean so you have a better understanding of how to use the various cards in battle. Armed with this knowledge, you should see a significant increase in your battle win percentage.

In Splinterlands there are two categories of cards: Summoner Cards and Monster Cards. In the game, Summoner Cards represent various elements: fire, water, earth, life, death, dragon, and neutral. The Summoner Card is like the leader of your battle team. The Summoner does not do any of the actual fighting in a battle. The Summoner card is your pick for which Elements cards you will use for battle and provides the fighting Monsters with buff, such as an armor boost, increased damage, magic, etc. In preparing to battle, the choice of your Summoner is an important one due to the specific buff choice it provides.

Monster Cards come in three varieties: Melee, Ranger, and Magic. These Monster Cards are the cards which actually fight in the battles. Each of these varieties carry with it a specific use in battles.

A Melee Monster will only attack if it is positioned in the battle's front line (with the proviso that it may attack from the back line if it has a special ability such as 'sneak'). The Front Line (in a battle) is shown in the following photo, circled in blue:

Base Photo Source (edited by author)

Your Range Monsters have the ability to attack from your back line. Your Back Line (in a battle) is shown in the following photo, circled in yellow:

Base Photo Source (edited by author)

Note: if your Range Monster's attack from the back line falls on your opponent's front line, that Range Monster can not attack any longer for the duration of the battle.

A Magic Monster has the ability to attack from both the front line and the back line. A Magic Monster's attack ignores any shield your opponent's monster may have permitting the attack to do damage penetrating this shield.

So, when building a battle deck. diversification in the type of monster is essential as the different types serve different functions. Now let's turn to what all those numbers and symbols on the card face mean.

WHAT IS THE SIGNIFICANCE OF THE NUMBERS AND SYMBOLS ON A SPLINTERLANDS CARD?

[For the purposes of answering the question posed in this heading, photos will be utilized. Unless otherwise noted, the photo source for each photo is the battle deck used by this author].

As set forth above, each Monster is associated with a specific element under which that Monster battles. The location of the Element to which your Monster belongs is found on the face of the card. In the following photo of Goblin Mech, its Element is circled in gold: 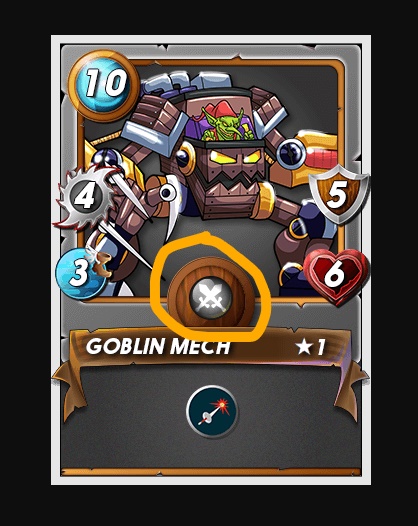 Each Monster Card's Element will be found in this location. The icon associated with each respective Element is:

Note: Neutral Element Monster cards are available for use in any battle.

For each and every Splinterlands battle there is a maximum amount of Mana you can use. Each card in the battle deck is assigned a Mana value which counts toward the battle maximum when choosing your Summoner and Monsters. In the following photo of Goblin Mech, the Mana associated with this Monster is circled in red: 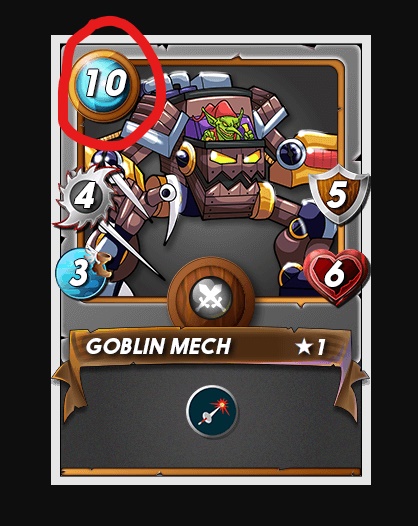 As stated above, Monsters come in three types: Melee, Range, and Magic. In the following photo of Goblin Mech, the way to identify your Monster's type and damage/attack value is circled in green: 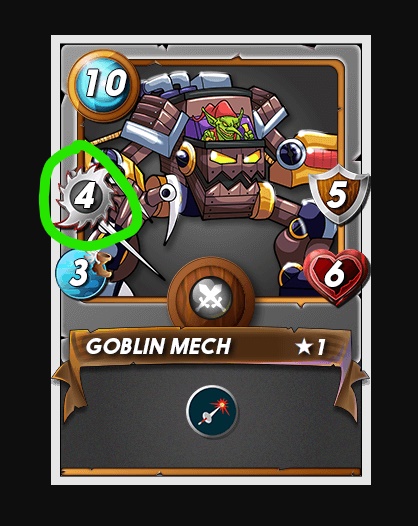 There are three different icons:

The number inside the respective icon represents the damage the monster can inflict per attack.

The Speed associated with the Monster you choose for battle is important. The higher the number of Speed, the faster the card.

The turn order of the cards chosen for battle depends on the cards speed. Also, speed is important as the faster the Monster card is, the greater the chance that Monster can eliminate your opponents Monsters before they have the opportunity to attack you. By looking at the following photo of Goblin Mech, the Speed of your card may be found in the location circled in orange: 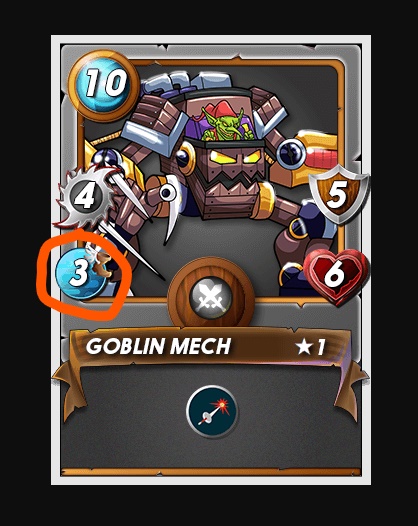 Not every Monster has shield capabilities. A Shield will deflect or reduce the damage incurred from an attack by your opponents Monsters. The Shield availability and number of shields available may be found on your Monster card in the location identified in the black circle in the following photo: 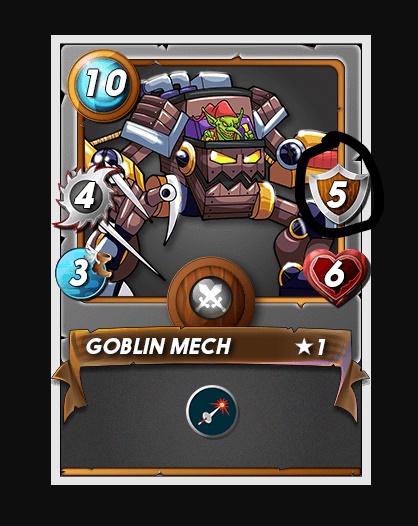 If the shield icon is absent from your Monster's card, that Monster does not have any Shields available for use in the battle.

Health points are important for the Monsters chosen for battle as when the number inside the Heart icon reaches zero, that Monster is eliminated from the battle. If all your Monster's Health Points reach zero before your opponent, you have lost that battle (you do not gain DEC but you do not lose the card from your deck - although the battle was lost you retain the cards used in the lost battle). In the following photo of Goblin Mech, Health Points are circled in white: 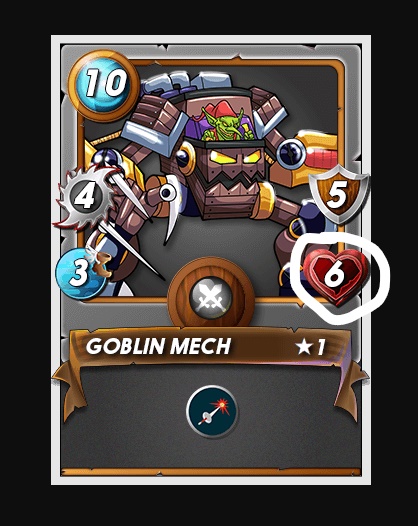 In the following photo of Goblin Mech, the location of where your Monster Card's special Ability is identified by the pink circle: 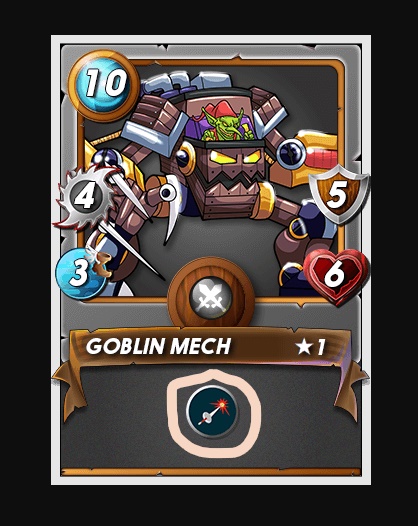 Not every Monster has a special ability so if this location is blank you have a regular Monster. At the time of the writing of this sub-section, there are 55 different Abilities associated with various Monsters. You may find a list of these abilities (with a display of the icons and brief description of the Abilities purpose) here.

MAKING YOUR CARDS STRONGER BY COMBINING

By combining identical cards in your possession, you can level that card up thereby strengthening it. Note that a greater number of identical cards are needed to continue leveling up for each step in the process.

To combine cards, go to your in-game card collection, find and click on the card you wish to combine. In the author's collection there is a card available for combining:

To combine your cards, once located, simply click on the button circled in gold in the photo above. [Note: it is required that you likewise level up your Summoners so that you will be able to use your newly acquired higher level cards]. Once complete, the page will change to reflect the combination:

A WORD ON YOUR STARTER BATTLE DECK

It is a great starting point for you that a bunch of starter cards were provided for your use upon purchasing the Summoner's Spellbook. But that's the thing, the cards provided are only starter cards, not at all able to provide you significant financial gain or help you to rank up in the Game. So, if you are going to pursue the Splinterlands Game, it will be critical for you to get your hands on some stronger cards and to generally expand your collection.

Basically there are three ways to acquire Splinterlands cards:

So, now you are armed with the knowledge of what your Monster Card's can bring to the table for you in Battle. However, this knowledge alone will not gain you a 100% win rate. Knowing what your Monster's can and can't do is only the first step along your Splinterlands journey. It will take time, patience and a tolerance for losing battles, but eventually you will discover card combinations that work in your favor providing wins. The financial benefits are there if you are patient and devote time and attention to the Game.

But please, always remember, it is a Game - have some fun! Good luck all.

Nice tips. More DEC for us to Hodl.
Can you tell us how to improve quest rewards opening luck :) JK

Unfortunately that is something I do not know. But sure as hell, I'd like to learn that secret for myself (LOL).

What is a sneak monster?

Sneak allows monsters to attack from any position in the formation. As long as you keep them alive they will attack every round even if they are the very last monster in your formation.

Any Monster that has this icon: $0.00
Reply
[-]
poshtoken (71) 2 months ago
The rewards earned on this comment will go directly to the person sharing the post on Twitter as long as they are registered with @poshtoken. Sign up at https://hiveposh.com.
$0.00
Reply
[-]
young-boss-karin (65) 2 months ago

This is an easy guide for newbies. I had to make a video tutorial to help my brother understand the ropes of the game. I'll be sharing this with him in case he missed a few things I said. Maybe you could give us a few tips on strategy? My ass keeps getting whooped too often.

I'm going to try and get something posted on general strategies by the weekend. But...I might not be the best one to ask - I lose far too often as well.

A very complete and detailed guide, I liked it very much. Grateful for this, although it may not give me 100% profit, it will help me to have a profit of 80%.

Thanks for the kind words and good luck to you!

Really great break down and tutorial on splinterlands! Play2earn is the future of gaming! Reblogging for the https://coin-Logic.com audience! It will show on the rotating feed on the front page!

Congratulations @kevinnag58! You have completed the following achievement on the Hive blockchain and have been rewarded with new badge(s) :

Thanks for writing this out. Im still pretty new so the more I can read and learn, even the basics, is always helpful

Honestly a total noob over here, this guide was so well written and easy to understand, i appreciated this info, thanks!

Great guide! Just shared w/ some folks I introduced to Splinterlands. When I try to explain it idk where to start lol

This is a very informative guide for newbies like me. Thank you very much for sharing. Can I share it in social media?