Welcome to the weekly edition of LeoFinance stats report.
This is a weekly report covering September 14, through September 20.

The last days/weeks have been exciting in the LeoFinance ecosystem, especially with the announcement of the wrapped LEO, (wLEO) and the incentives for the liquidity providers. Lets take a look at the LEO numbers.

The following topics will be covered:

Let’s take a look into token issuance and how it is distributed over time.

Below is a chart that represents the cumulative issued LEO tokens. 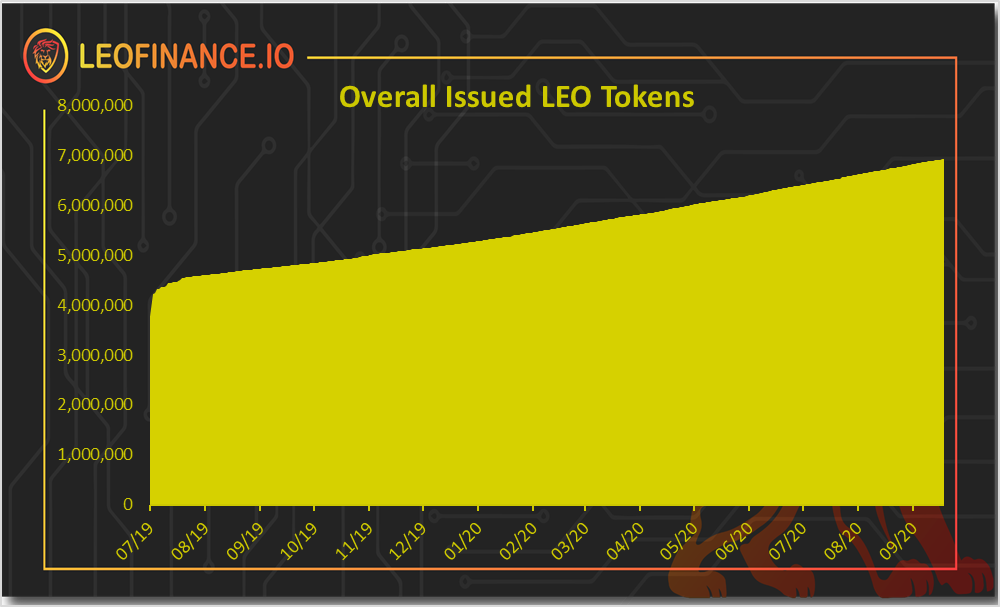 A total of 6.93 M issued LEO tokens.
Notice that the LEO token doesn’t have a large inflation compared to the base supply and is slowly increasing its supply. Note that burnings are not taken into consideration in this chart. That will be presented below.

Next is the issued LEO tokens from last week. Here is the chart: 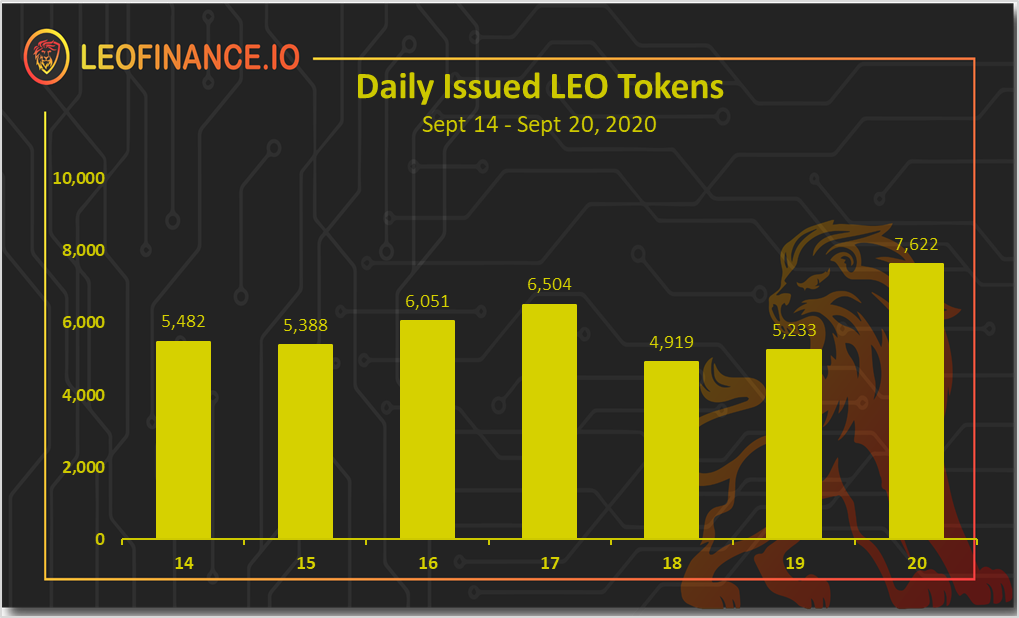 On average there is 5.9k LEO issued daily in the last week.

Let’s see how these tokens were distributed.
Below is the chart of the top 10 LEO earners this week. 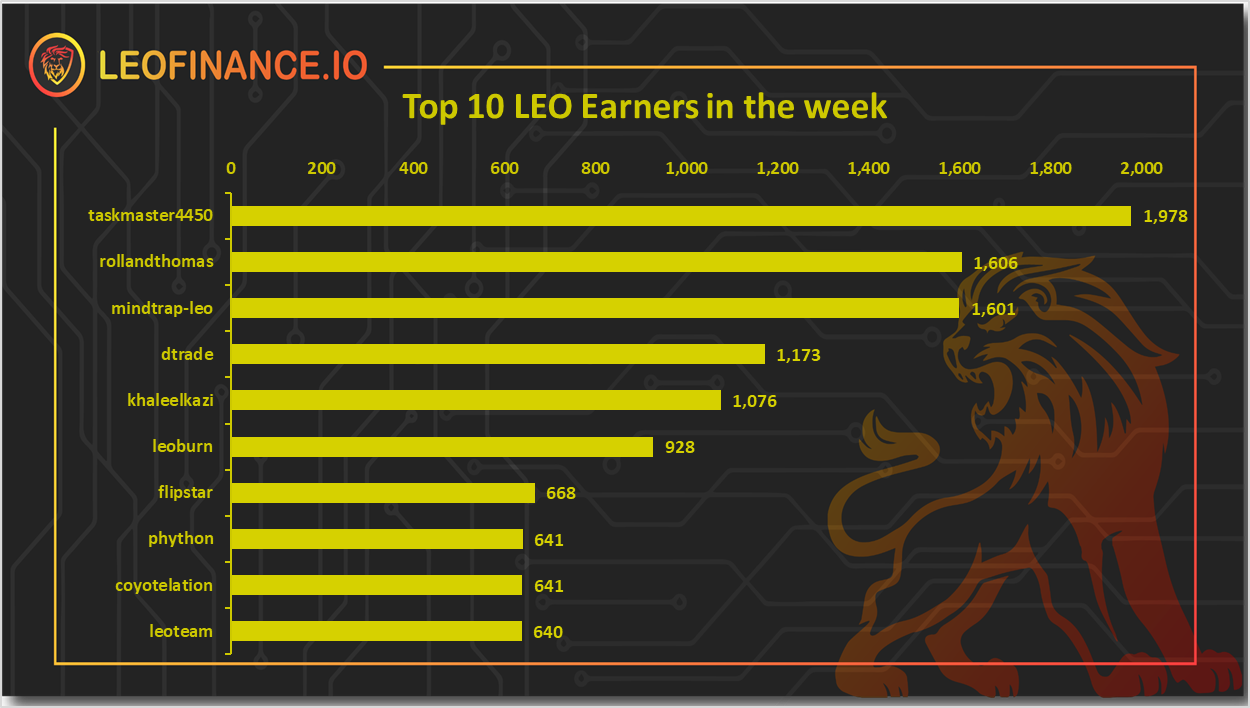 @taskmaster4450 is on the first place with almost 2k, followed by @rollandthomas and @mindtrap-leo on third place.

Having more HP delegated to the @leo.voter account provides an incentive to users to use the platform and continually grow the ecosystem. 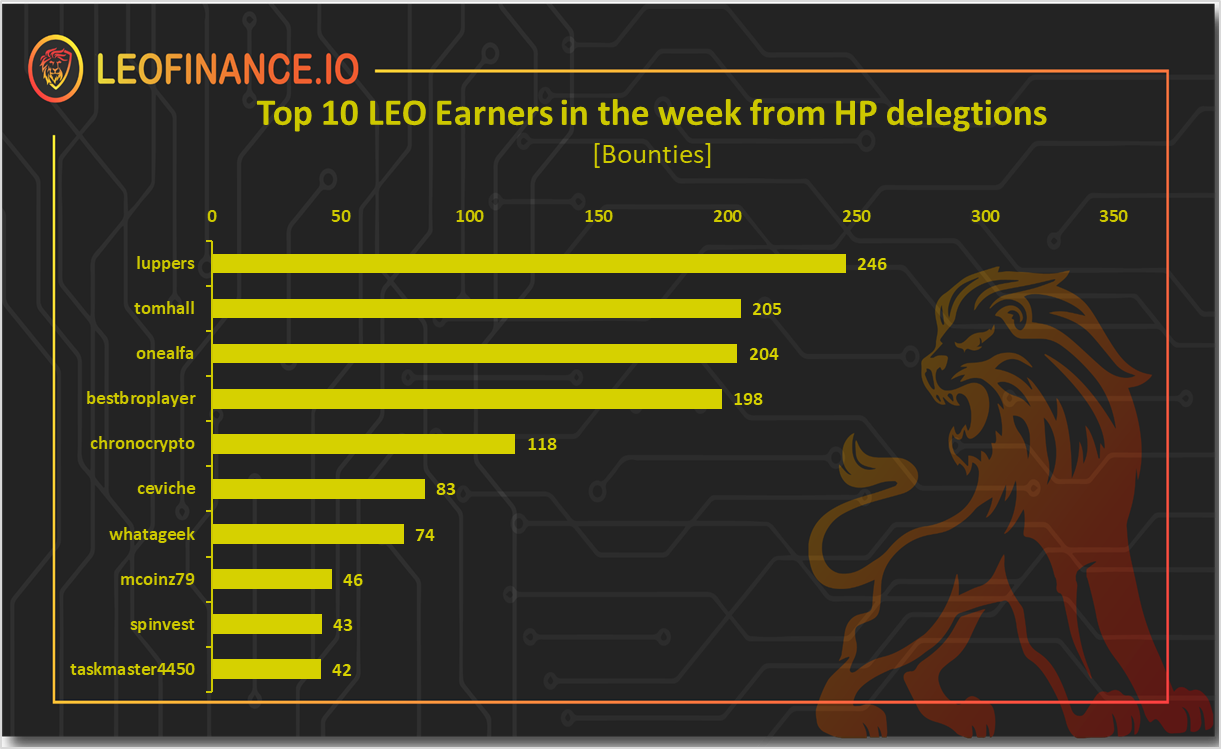 Below is a chart that represents the daily flow of staked and unstaked LEO tokens. A positive bar going up shows a day where more LEO was staked than unstaked. 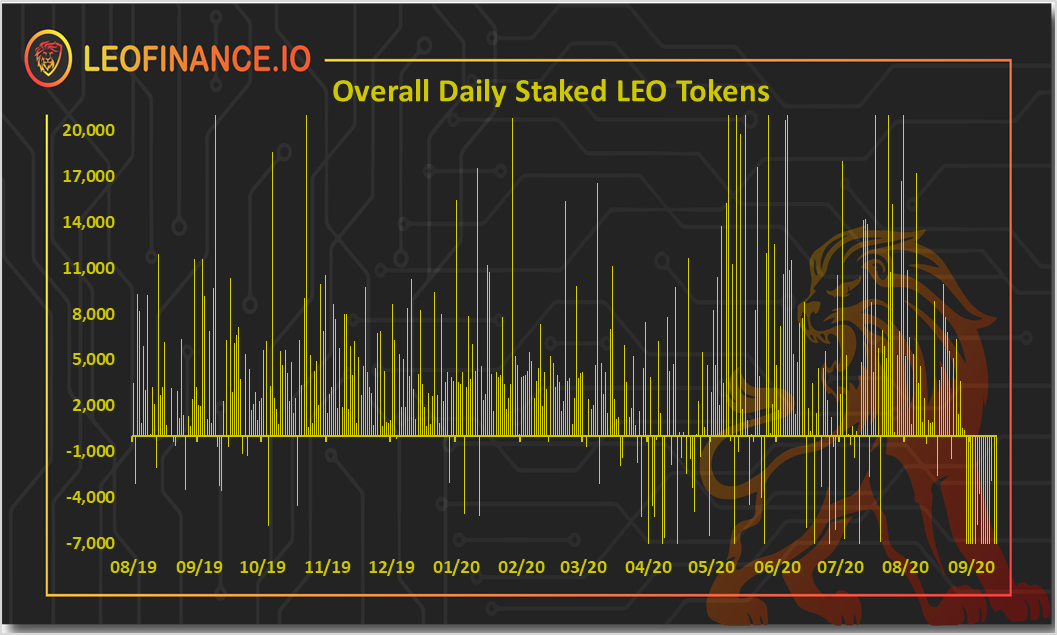 July 2019 is excluded from the chart for better visibility. Those are the first days and there are a lot of tokens staked.

Let’s take a closer look at the past week: 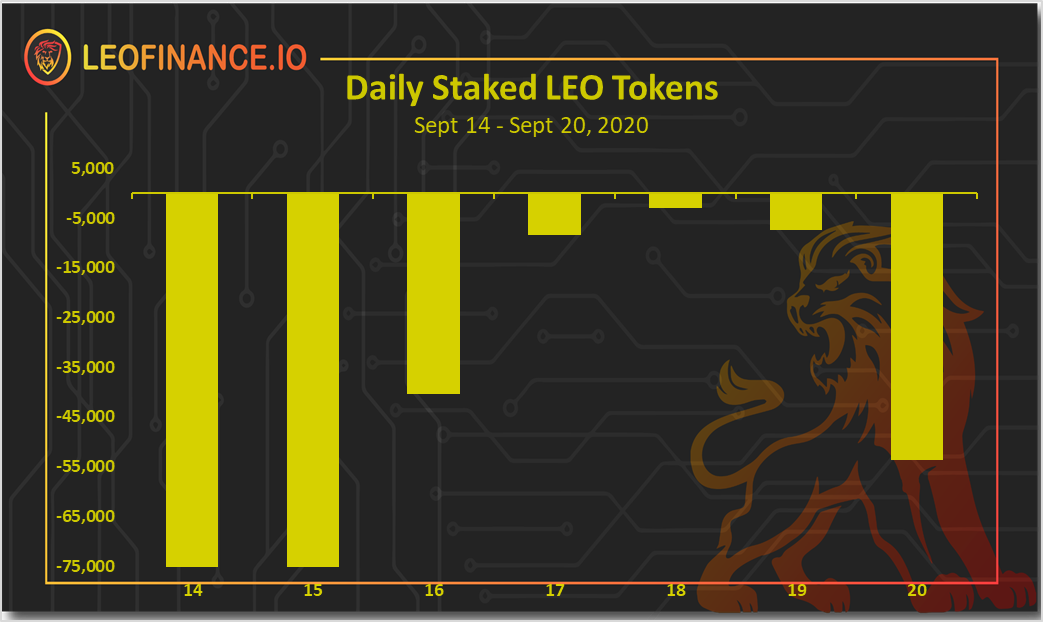 This is a unique chart! It’s the second week since the large stakeholders are having their stake powered down to provide liquidity on Uniswap, resulting in negative net staked LEO. Its almost the same as the previous week.

LEO unstaking period is 4 weeks, in 4 transactions each week. The above is the second week from the 4. We can expect similar numbers in the next few weeks.

Note that some of the unstaking LEO operations might be canceled and not go trough for all the four unstaking transactions.

Here is the chart for LEO that has been put in power down. 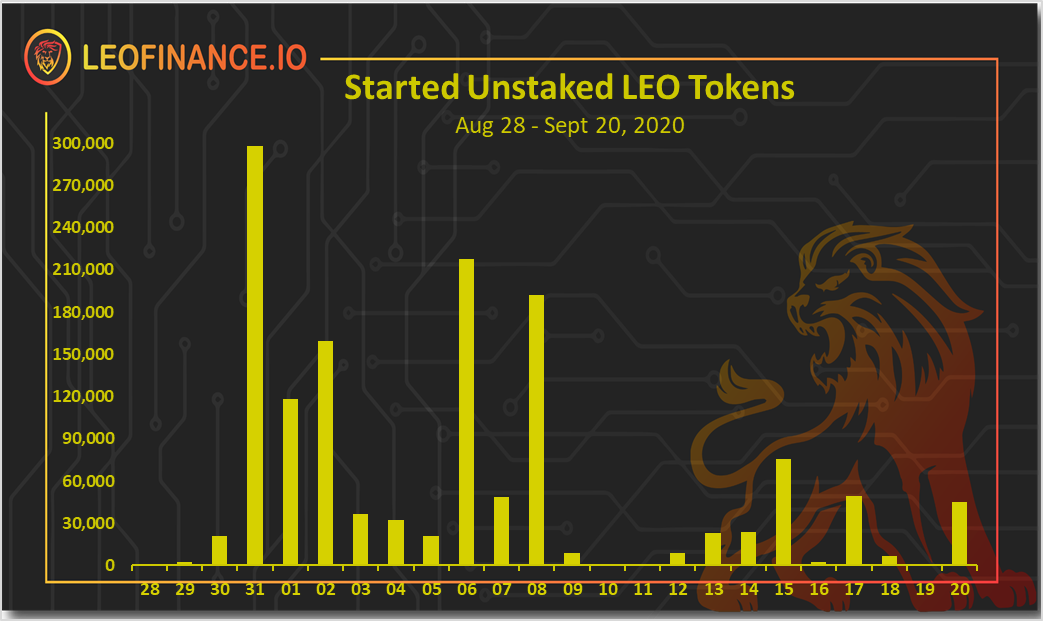 Looks like the ones that intend to be LP have already put their unstakinng in the process, and we can see in the last days there is no such a big numbers of unstaking LEO.

Below is the chart of the top 10 users that staked LEO last week: 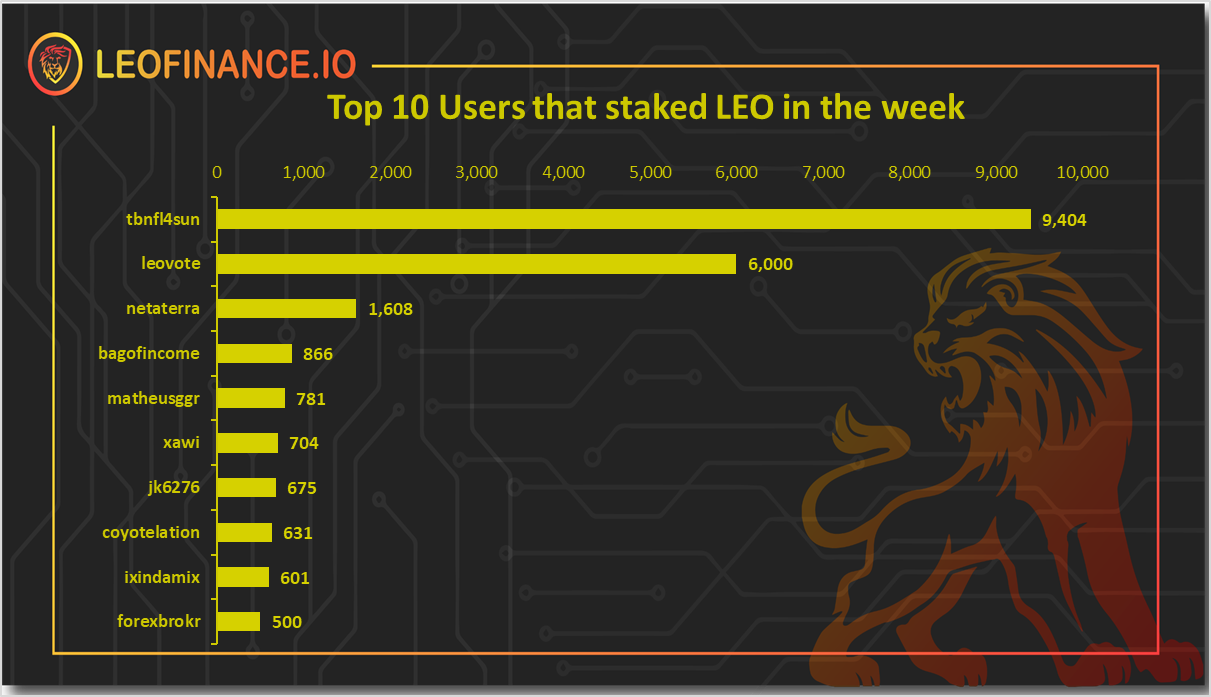 The Overall Flow of the LEO Token Supply: 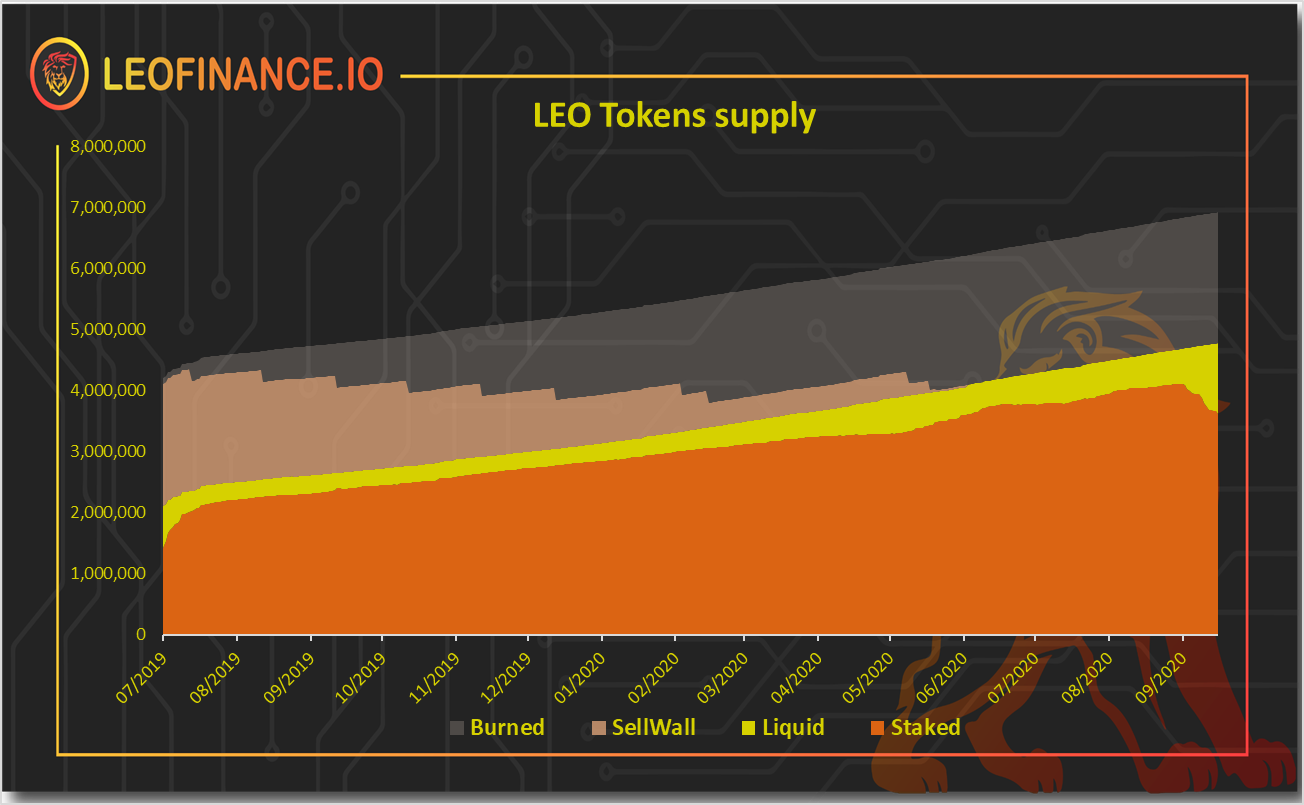 The sell wall of near 2 millions has been burned and we now have only the liquid and staked LEO.

Below is a chart of the ratio staked/unstaked tokens. 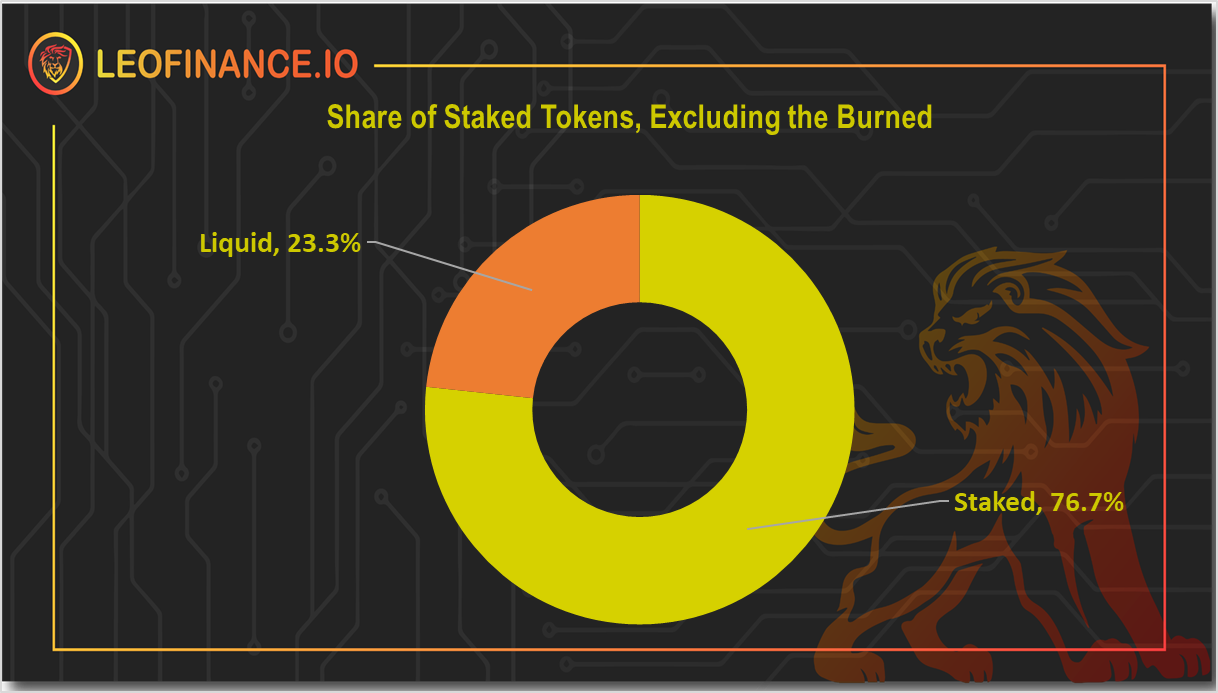 Now we can see a clear drop in the share of LEO staked. Historicly LEO had around 90% staked tokens. Last week it was 83% and now77%. A 6% drop. We all know the reason for this.
It

Below is a chart with the number of unique users that posted from the LeoFinance frontend. 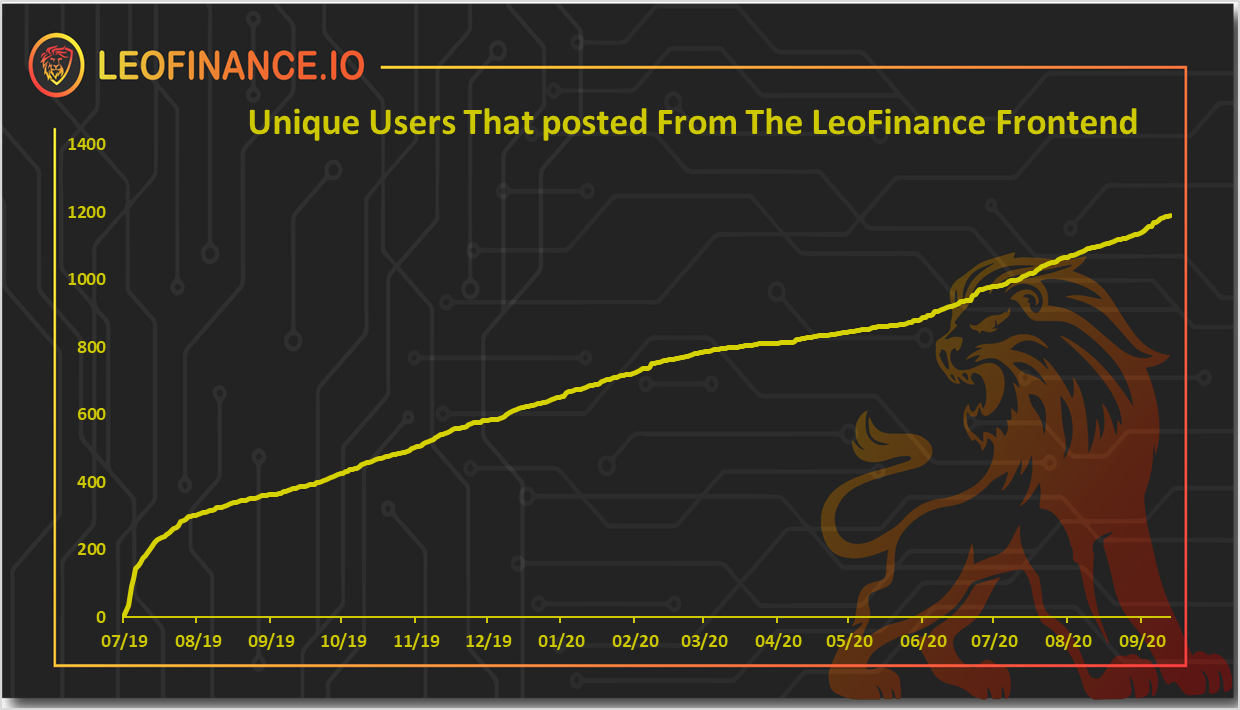 A total of 1206 unique users have posted from the LeoFinance frontend.

In the last period there is an increase in the number of new users.

Here is the chart for the monthly active users that posted from the leofinance.io interface. 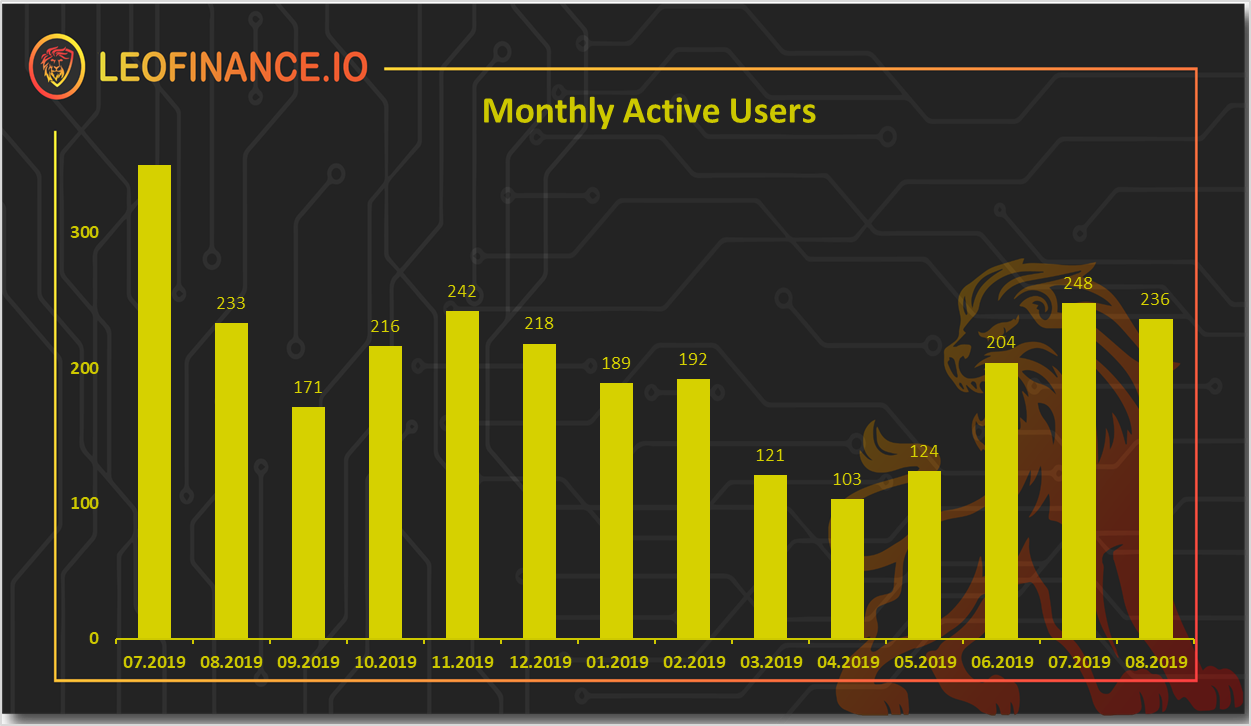 After the jump in MAU in July, August has seen almost the same numbers. It will be interesting to see the September numbers. 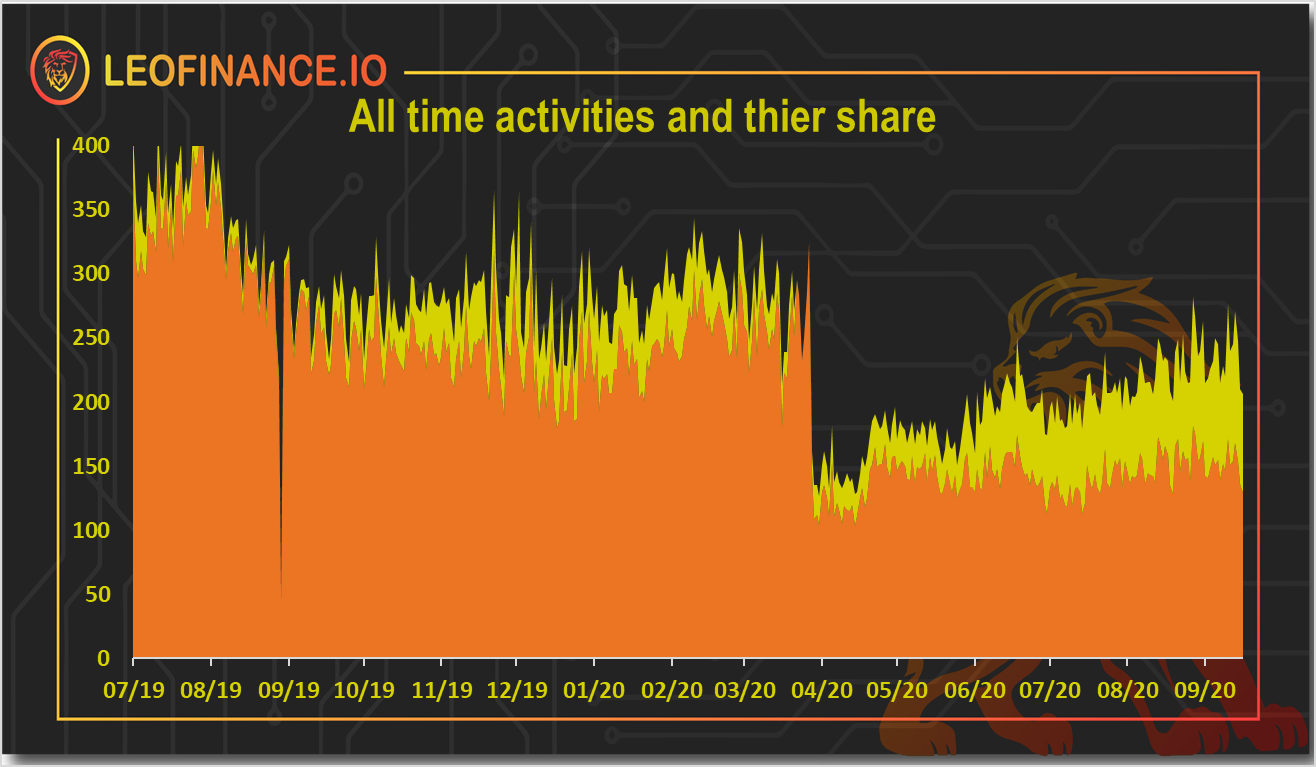 As we can see the price increase has done it part and there is increase in the numbers of posts coming from leofinance.io.

Here is the chart showing only posts made from the leofinance.io interface. 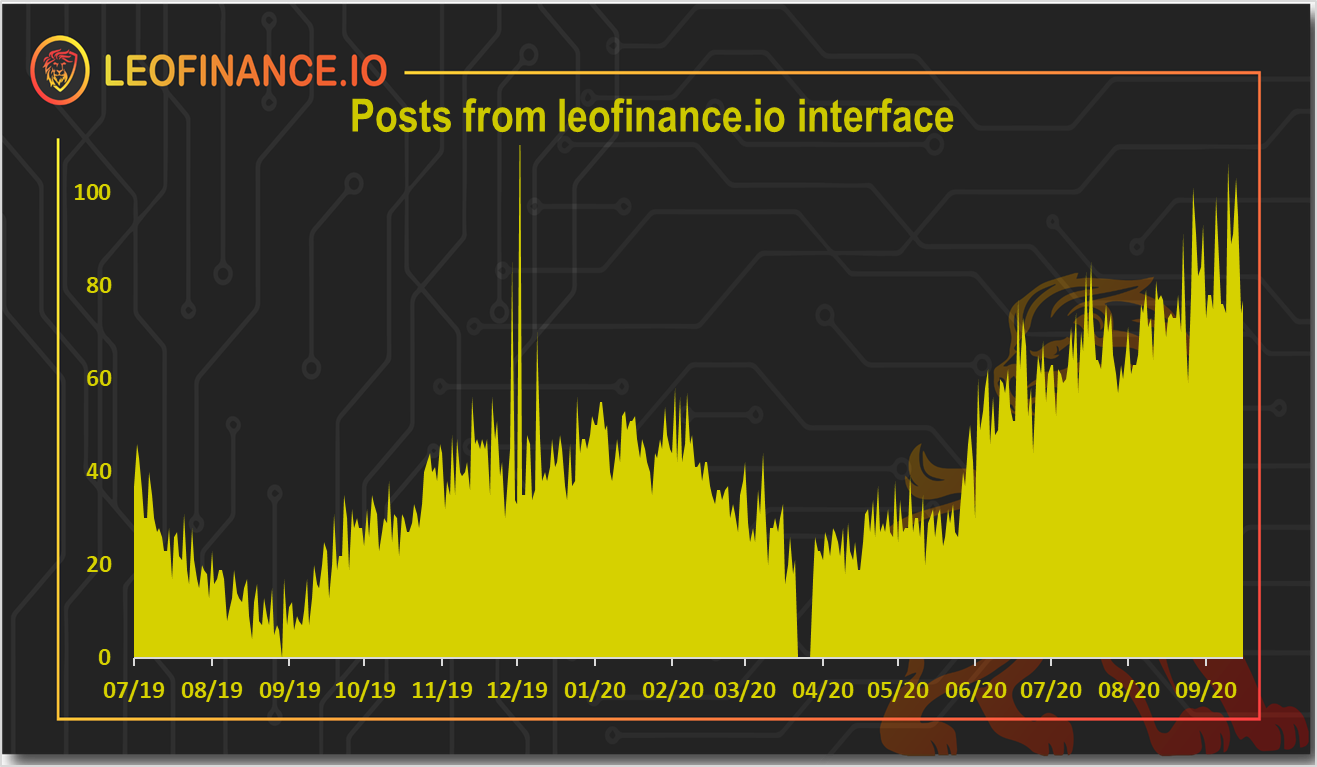 On September 14st there is 106 posts made from the leofinance frontend. This is a record high number if we exclude the previous spike due to spam.

LeoFinance has introduced a 10% incentive for posting trough the native frontend. When users post from other frontends and just with the leofinance tag they have 10% less rewards.

It is interesting to look at the LEO token price, keeping in mind the crazy ride that HIVE had in the previous month.

Here is the price chart in dollar value with proper daily candles: 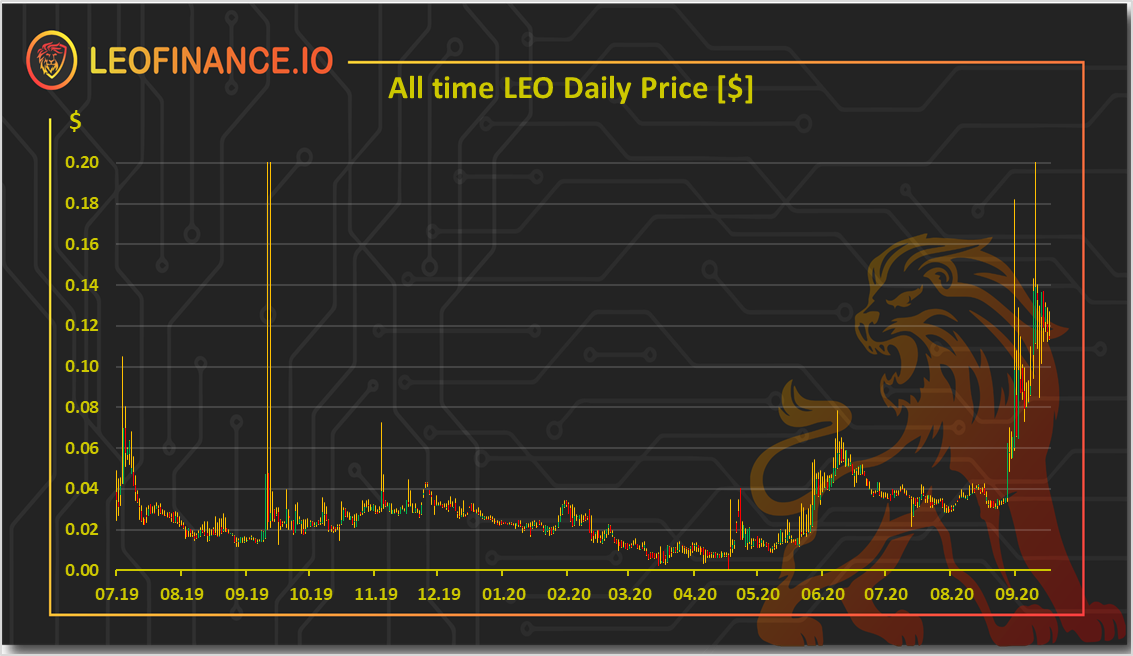 If not the short term pump that happened back in September 2019, this will be the ATH for LEO.

LEO price in the Last 30 days

Here is the price of LEO in the last 30 days also in dollar value: 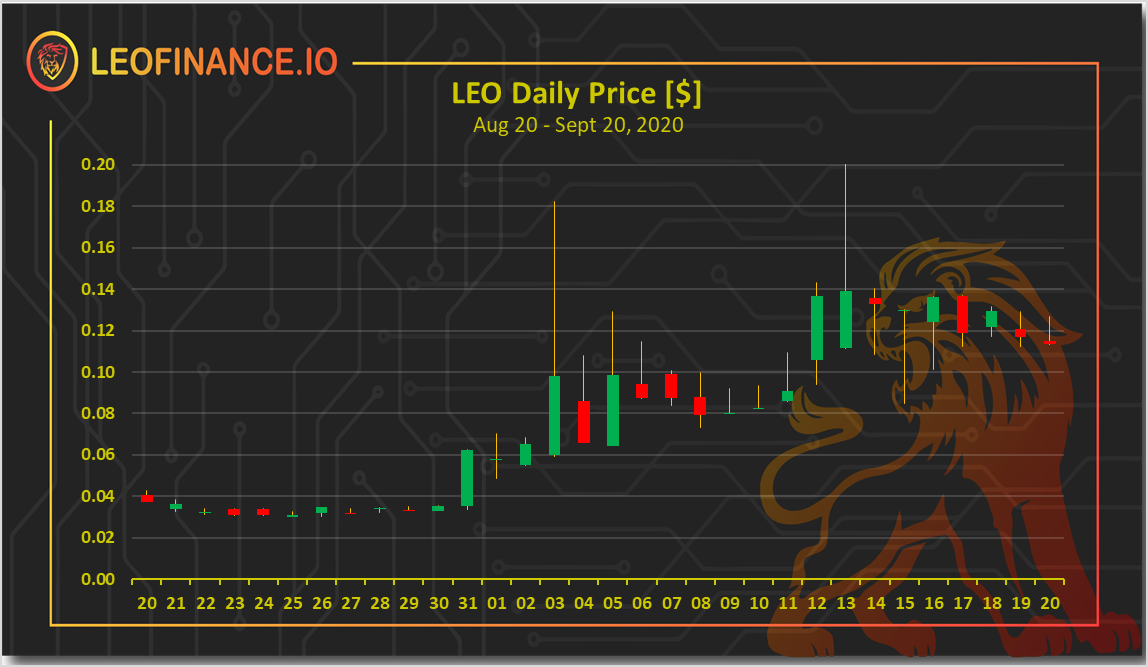 LEO was trading in the range between 3 and 4 cents and in the last weeks it has exploded reaching 18 cents at time, reaching parity with the price of HIVE! These days it trades in the 10 to 12 cents range.

I was number 1 in something! Yeeehaaaa!

Damn a 4x gain in a month and yet we're still such a small community of only 230 monthly posters, the math on this is insane, if only a slight network effect takes hold this coin will have an upside potential that will melt brains. I wonder how LEO will do during the next bull run with the tight tokenomics it could be nuts

Great to see the stats, I think the stake or power up was lesser this week either because if the focus on the uniswap drama or to pool.
Good to see users increasing on the interface.

Surely in the next couple of weeks, there's going to be a drastic alteration of the stats from what we has a month ago. By mid October, things would get to stable and we'll be having a new trend in Leo Stats. We're anticipating new investors and things would follow the new normal for the crypto world.

Nice to see this! I expect we'll be looking at a very interesting set of weekly reports over the next few weeks as new features and trading opportunities take flight!

Glad to be the largest delegator to @leo.voter ! Glad I can support the project!

I am very surprised and happy to know that I am in the weekly report for the first time. It is a dream being realized and despite the circumstances and great challenges I always thought that one day I could reach one of the biggest LEO winners of the week and also mainly among the most staked.

@leo.stats you don't know how happy I am. Continue with your great reactions and we will take LEO to an incredible future.