leofinance (73)in LeoFinance • 2 months ago 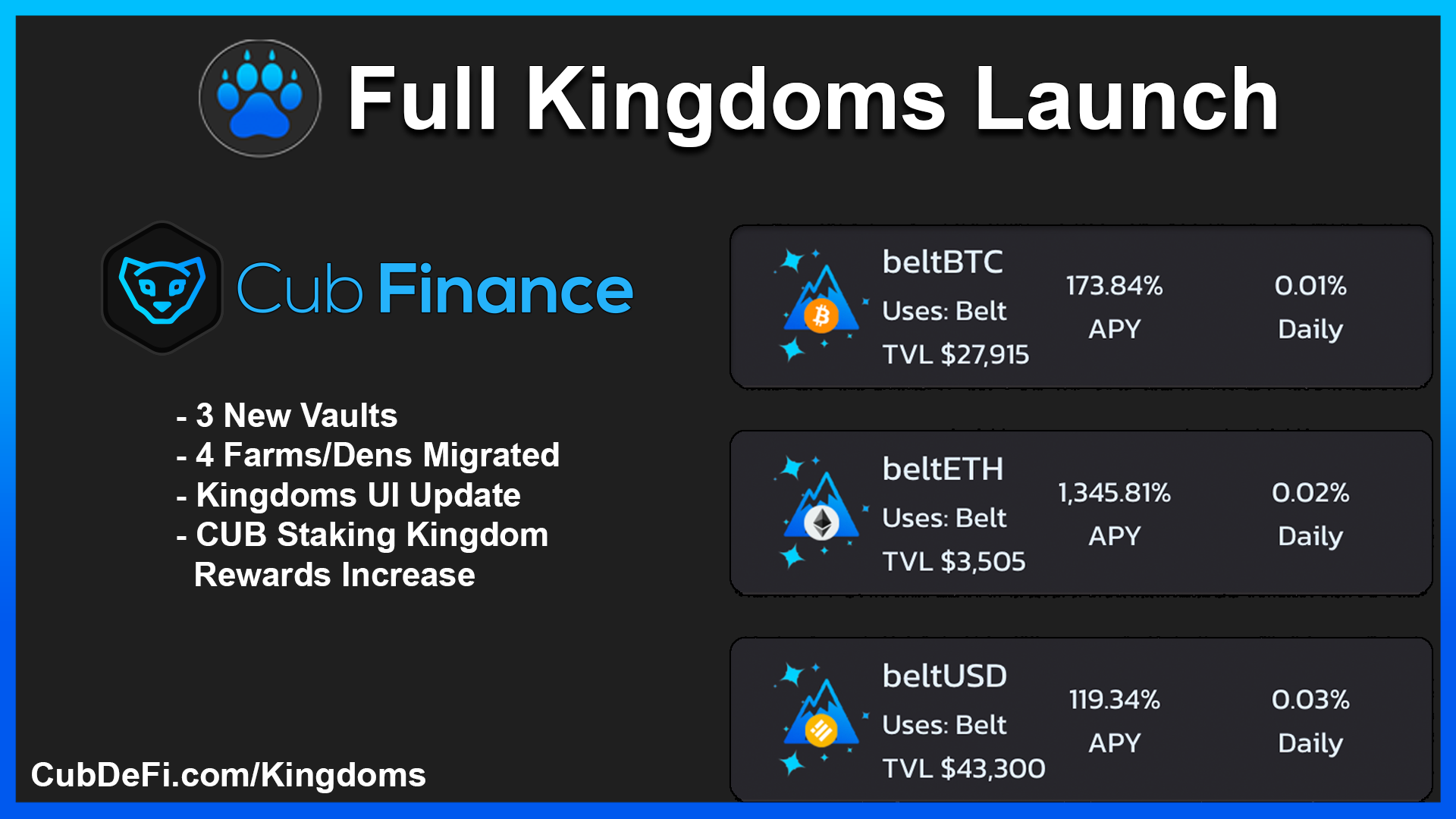 The time has finally arrived for the full launch of CUB Kingdoms. We've spent a long time building this feature into CUB and there is much more to it than simply releasing new vaults.

What exactly does this mean for CUB?

A lot of things. Most notably: sustainability

In previous posts about Kingdoms, we've talked at length about sustainability for the https://cubdefi.com platform on the binance smart chain. It's vital that we bring long-term sustainability to the tokenomics and continue to develop new features to create deep levels of utility for the CUB token.

To kick this off, we designed, developed and have now released CUB Kingdoms.

When combined, these features create a radically positive shift for CUB tokenomics:

What is Launching Today?

Today marks the full Kingdoms launch. There is a lot that goes into finalizing the Kingdoms migration. Yes, we've added 3 new vaults but that is just the tip of the iceberg:

The turning point for CUB has begun! We've officially moved away from unsustainable tokenomics - the ones utilized by platforms like Goose DeFi and Pantherswap - and we've moved toward sustainable tokenomics and long-term appreciation as TVL grows, management fees scale and new utility features are launched (i.e. the upcoming CUB IDO feature which will likely burn $1m+ worth of CUB off the bat - details later this week). 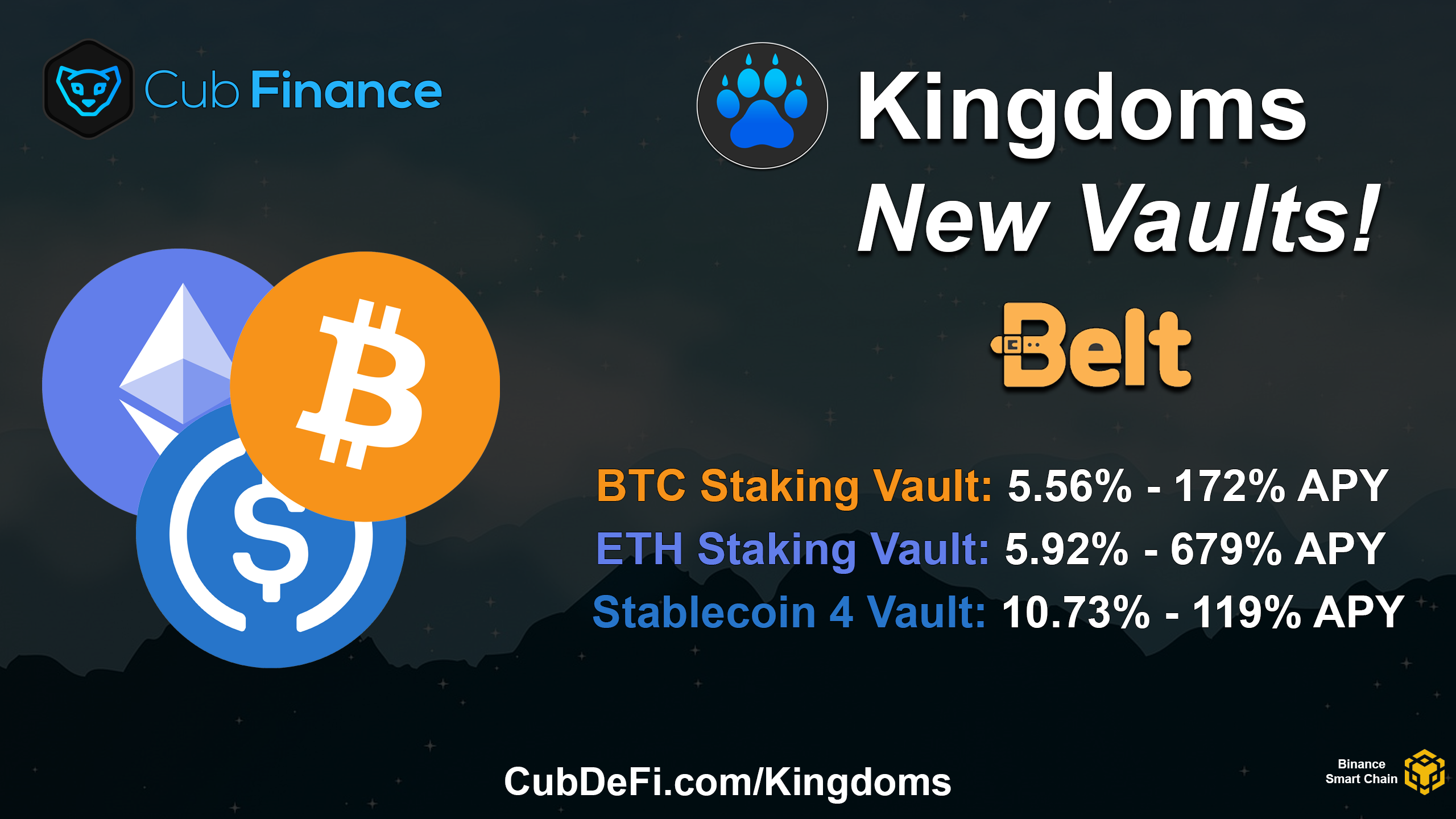 Note: the smaller end of these APYs (5.56%, 5.92%, 10.73%) are the external farm yields (on the Belt platform). These yields do not vary much. The ladder part of the APY - which comes from the CUB portion of these rewards - is much more variable. It depends on the competitive landscape of TVL flowing into the CUB Kingdoms.

As mentioned in earlier releases about Kingdoms, we'll create a regular churn event where multipliers from 1 Kingdom may flow to another Kingdom to rebalance the CUB APR given to one vault vs. another.

This churn process will be based on TVL in one vault relative to the total TVL in all Kingdoms vaults. More details will follow in a post about the first Churn event (likely in about 7 days).

The APYs listed above will change drastically as TVL is migrated to Kingdoms.

ICYMI we had to push a number of updates to finish our preparations for the Kingdoms launch. We decided to wait until the weekend was over to move from testnet to production.

The Week of CUB is still ongoing but with new target dates for our Press Releases.

Kingdoms just went live as of this post being published, our other PRs are scheduled to release in the days that follow: 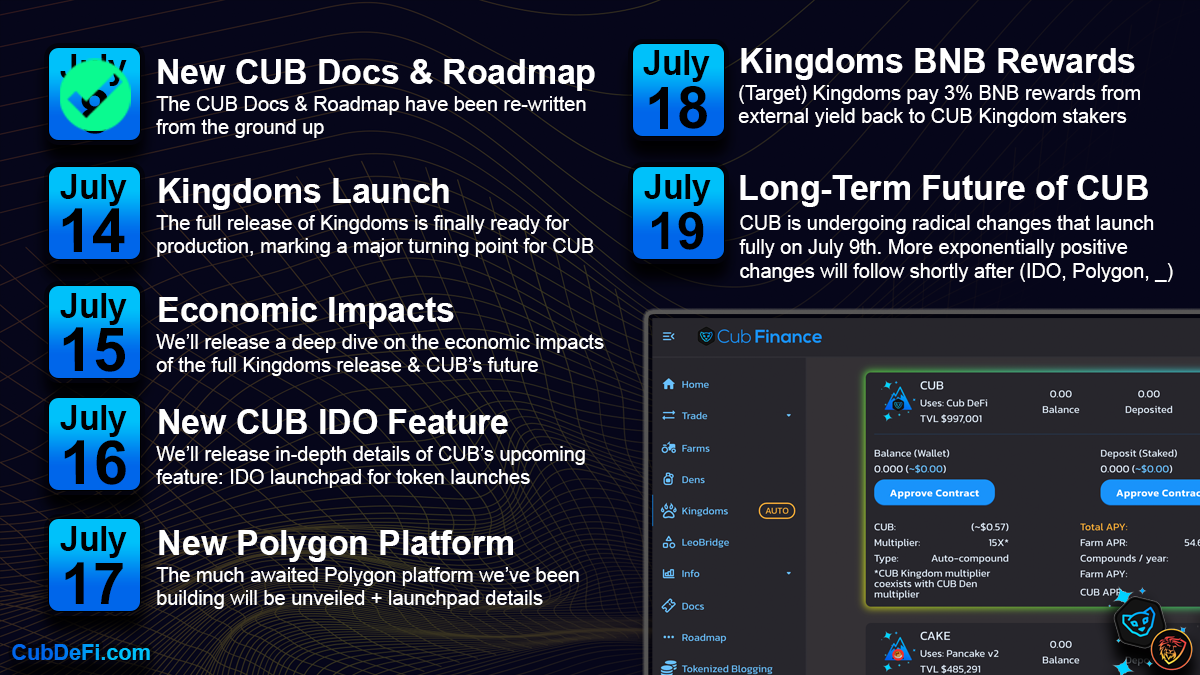 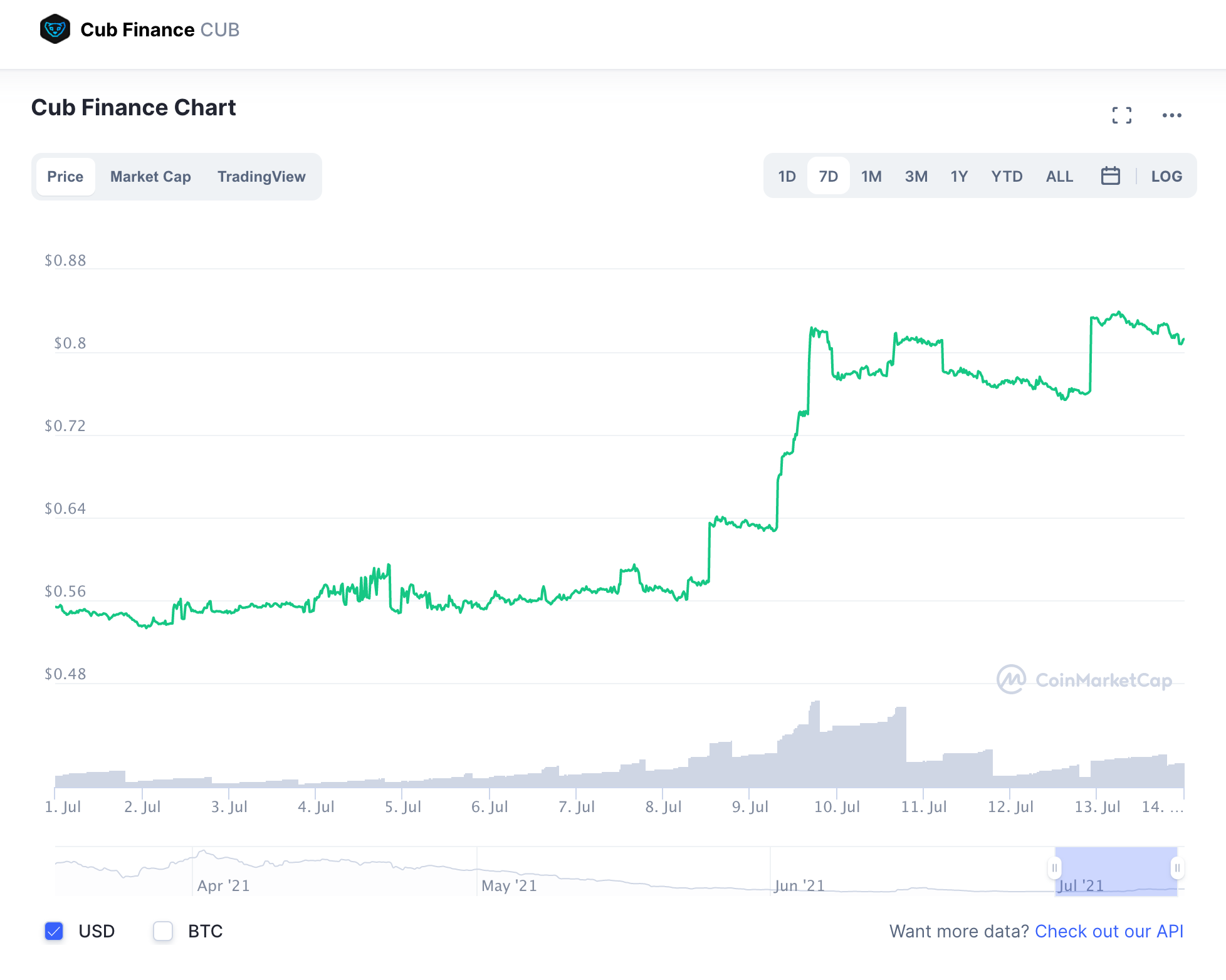 The roadmap for Kingdoms will be released soon and talk about the next features we're building. Our focus is moving toward improving the UI while we continue to build our CUB IDO Feature and prepare for the Polygon launch.

After a few iterations, the Kingdoms UI will be drastically improved with data to make tracking your Kingdoms position as easy as possible. We'll also be negotiating with various platforms to list more Kingdoms and collaborate in various ways with IDOs and the CUB token.

Massive updates are shaping up on the horizon! Details #Soon™️

i.e. the upcoming CUB IDO feature which will likely burn $1m+ worth of CUB off the bat

This is a pretty amazing statement. Really looking forward to the details about this one. It is going to be interesting how quickly this comes about.

This one is really the cherry on top of the whole thing for me. A supply that will be cut in 1/4 in a few weeks... bullish!?! I think so.

I agree with you that the burning of one million Cub for the IDO, following so closely on the heels of the Latest Kingdoms release, along with the transition to the New Tokenomics Model takes my breath away… momentarily.

Be still my heart!

congratulations every day improving to get better stability in Kingdoms.

So where are now my BTC from the BTC Den? Apparently they were not moved to the Kingdom.

As with the other migrated vaults, you need to unstake from the old vault contract and migrate to the new contract using the "Finished" tab on /dens (for BTC and ETH) or /farms (for the stablecoin farms) 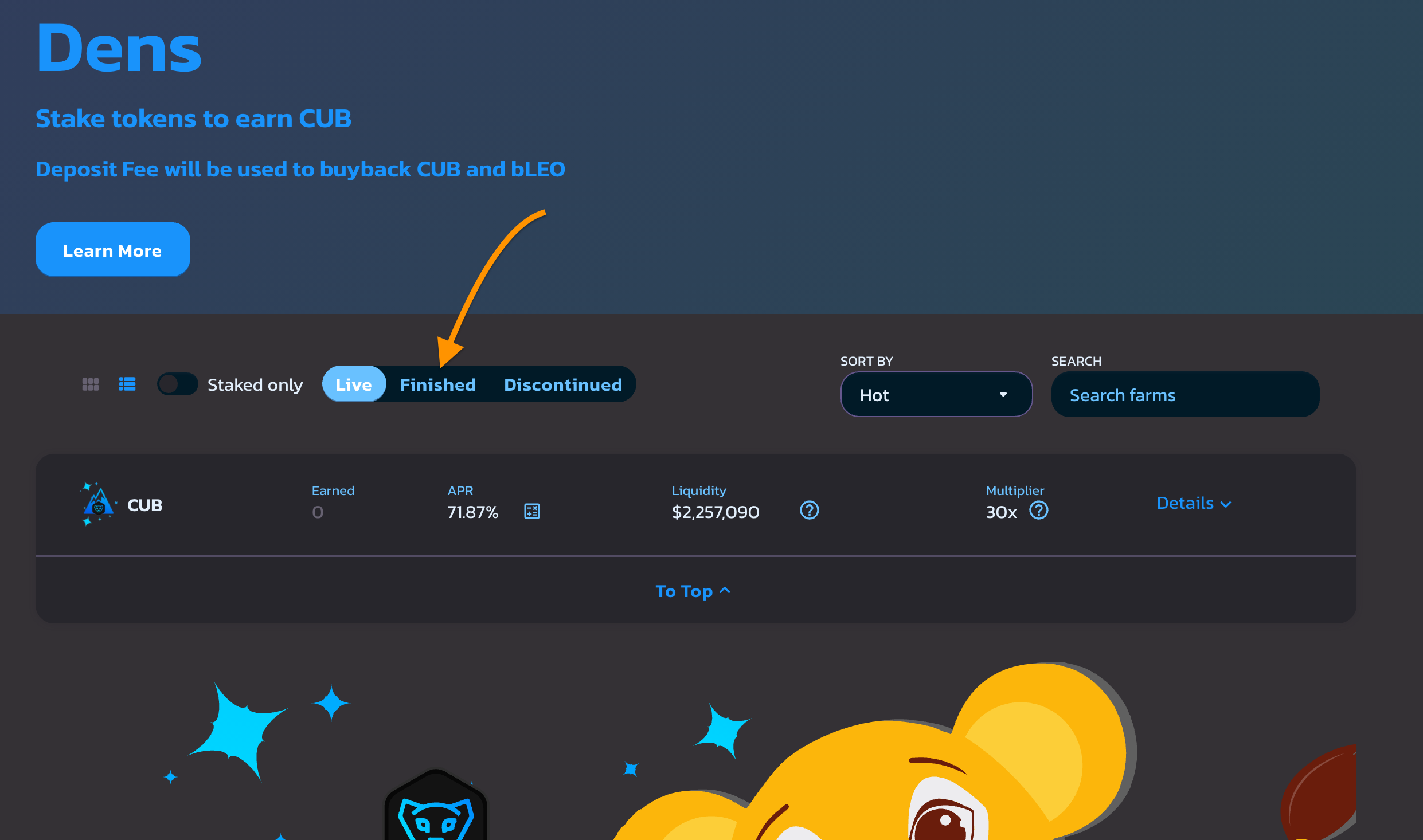 so now that Im unstaked from the eth den I have to buy belteth on belt.fi right? Its my first time using it, so naturally, as usual Im nervous. Buyback and earn is already an unfamiliar concept to me... is there a simple step by step guide somewhere of how to make this migration?

You need to unstake eth den, go to Vaults in https://belt.fi/ and Deposit ETH to Belt.
It will automatically convert your ETH to beltETH.
Instead to stake beltETH in belt, you stake beltETH in Kingdom thankyou for this answer!

Is it the same for Cub den? Where I need to install and stake to earn cub?

I think the CUB Den will still be active but you should move over to the Kingdom for better rewards and auto-compound.

Exactly, auto-compounding results in higher rewards. And the Cub den remains as an external to
Kingdoms den/farm in the eyes of the smart contract.

Make it rain!!! So much fun to be watching this all from the inside. I can't wait until people really start seeing the value this brings and the userbase in Leo starts climbing. It all works together. Going to be a fun few months and beyond. Great work!

True, we should all promote this on Twitter as much as possible, without Spamming.

Really excited with the direction you're taking the platform... DeFi really should be a workable solution for everyone and not just people who got in pre-launch. Really love the push towards long-term, sustainable solutions!

Here we go to the moon,
i am happy to stay here, thanks kal for teach to us how enter to DEFY world, with a litte risk, for now.

Hi @leo.voter @leofinance, following HF25, i wonder if delegting HP to leo.voter still pays 16%APR (as stated in footer above)?

Thanks. I'll increase my delegation in that case.

Thanks for the updates, someone could explain me a little bit more about how can I migrate from dens to kindoms? I mean, I had some eth in dens, I had withdaw that amount, but when I tried to put some in bETH, I couldn´t because I have to buy other token. So, ¿could I buy the token by belt and then fund in kindom? Thanks for your help and sorry for my ignorance, but I prefer to ask. :D

If $1m worth of cub gets burnt, I'll have to marry you.

Amazing accomplishments in such a short time and what a great vision for the future of the project... just glad to be here and be a part of this DeFi project!

Amazing accomplishments in such a short time and what a great vision for the future of the project... just glad to be here and be a part of this DeFi project!
My sentiments exactly.

I am loving these steady and consistent updates to CUBdefi! These communications are Huge value for new users and HODLers of CUB!

…steady and consistent updates to CUBdefi! These communications are Huge value for new users and HODLers of CUB!

I never really touched the BTC, ETH and USD Dens but what is the belt version of these tokens?

I million worth of Cub burned, that will likely skyrocket the value to sky heavens. Goodness me! Hit it, hit it big, I can't wait for the exciting times to continue.

Be still my heart, you could be right…

Finally thy kingdom comes!
This is great for both the Cub and Leofinance ecosystem and this will have a very significant impact in these next months.

We are going to see an insane increase in the TVL and also maybe in price and users towards the year, thanks for this update.

I hope your right about this:

We are going to see an insane increase in the TVL and also maybe in price and users towards the year,

It's just my assumption though hehe, not financial advice!

Major updates to the platform. Let the next chapters come because the future promises to be quite exciting.

"After a few iterations, the Kingdoms UI will be drastically improved with data to make tracking your Kingdoms position as easy as possible."

Very much looking forward to the next phase - the launch on the Polygon blockchain!

It’s a very special feeling to watch this develop after three years!

So what about the BNB rewards, @leofinance? Weren´t they promised for 13th July?

Oops I have been missing things as being inactive.
I'm excited about the polygon thing and the new IDO. Some bold statements there and CUB price is already reacting. Loving it.

I think things are coming together fabulously and I congratulate you on your achievements thus far.
The transition to low inflation and hopefully more sustainable Tokenomics has been exciting to read, write and understand. The transition to Kingdoms as part of this strategy seems like a great idea. Then to follow all these with an IDO with actual large scale Cub Token burns is fantastic.

Plus the Cherry On Top the Leobridge. I see the completion of the three bridges Eth to BSC, BSC to Polygon and ETH to Polygon, as literally the flag on the top of the mountain.

You are just living the dream.
👊

This is sooo cool. The team deserves a huge thumbs up, the roadmap is exciting!

@leofinance, you've been given LUV from @ykretz.

@leofinance! I sent you a slice of $PIZZA on behalf of @ykretz.

This is really amazing project. Why is BeltUSD about $0.97 ? Does that mean we lose around 3% going into it? Is there a chance that it loses its peg even further?

Looking forward to this lol

Wow! Looks like a lot of hard work went into this. Just voted for the leofinance witness. Keep up the great job!