There are now twenty-two chains connected to the Cosmos (ATOM) ecosystem through IBC (Inter Blockchain Communication) the protocol that allows blockchains to talk to each other. And many more that are yet to connect.

In my previous attempts to research and document Cosmos I'd managed to cover seven of these. Time to pick up a few more before I get left behind!

As the name suggests, the Secret Network blockchain is all about privacy. In particular privacy as applied to smart contracts.

If you've ever used Ethereum, Solana, or Binance Smart Chain you've probably used an explorer to look at your smart contract transactions at least once. And by doing so you'll be aware that all the data used for your transactions are public: the inputs, the outputs, and the addresses of the smart contracts being applied.

Anyone can see this data and, with the aid of an explorer for translation, they can look through everything a particular wallet has done - a concept similar to using hiveblocks to examine a Hive wallet's history.

The simple, but extremely powerful, idea behind Secret Network is to encrypt this sensitive data so that only the user can view it, thus bringing privacy to smart contract usage. Even the nodes running the network cannot see the unencrypted data, instead operating as black boxes for processing (no, I have no idea how that works).

Native tokens (SNIP-20) on the network are encrypted. This means that only the wallet holder with the viewing key can see their own asset balances. More interestingly, there is a process to produce secret-wrapped versions of existing tokens from other blockchains (such as ATOM) which then share the privacy features of the Secret network.

NFTs on the blockchain are also private. And private smart contracts could open up a whole new avenue for metaverse gaming simply by increasing the element of surprise.

As well as providing individual privacy to users, Secret aims to end miner/node manipulations such as front-running and sandwiching of transactions.

Secret Network has recently implemented the IBC protocol to connect to the Cosmos ecosystem (as of 22 November). It is also CosmWasm enabled (like Juno). The former will, among other things, allow SCRT tokens to be used throughout the Cosmos ecosystem, for example on other DEXes and in farming. The latter should allow Secret network privacy functionality to be incorporated into other Cosmos ecosystem blockchain dApps (through cross-chain smart contracting).

Currently there does not appear to be too much in the way of dApps built on the Secret blockchain (maybe they're secret, huh?). Some DeFi. A single NFT dApp. One game that I can't get to work. It still feels pretty early for this chain.

The idea of privacy in cryptocurrency is not new. Privacy coins such as Monero have been available for years. But privacy for smart contracts is a significant development that I haven't seen being rolled out elsewhere. This is one I will be watching.

At the time of writing SCRT sits just outside the coingecko top 100 by market cap, although it has previously been inside that coveted first-page group. 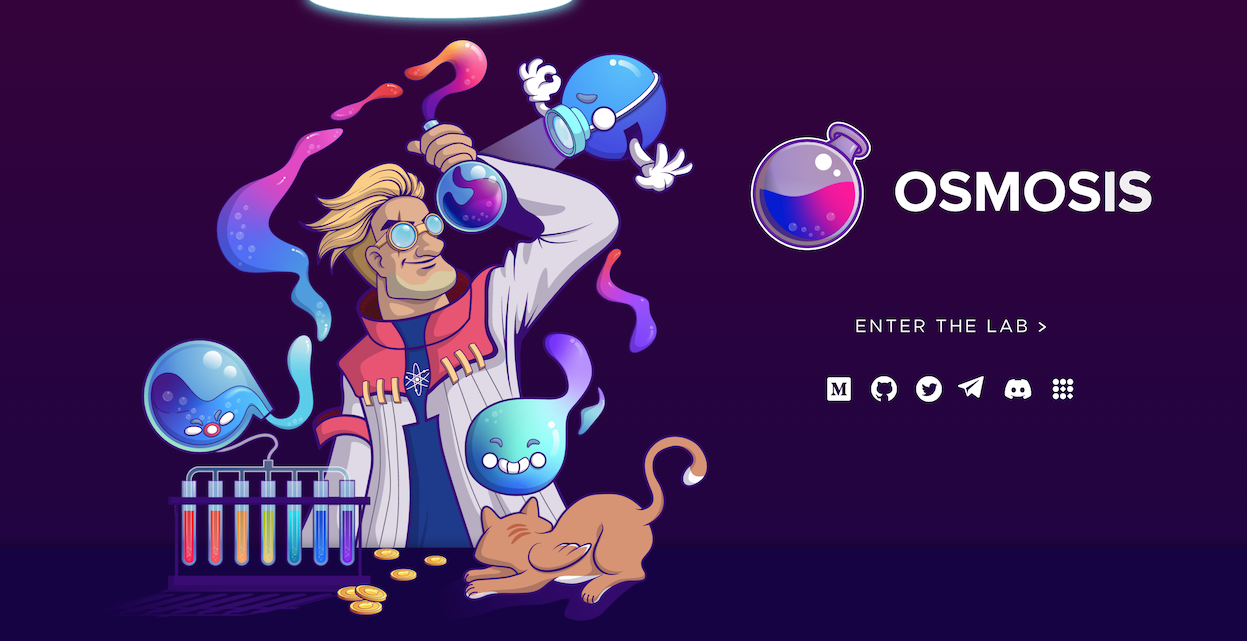 Osmosis is DeFi on Cosmos. Swaps. Pools. Farming APR. All tied together with a mad-scientist themed UI that is probably the cleanest and smoothest I've seen in crypto.

Of course, since this is a summary of Cosmos blockchains, you'll realise that Osmosis is also a blockchain. Which allows them to add in some airdrop incentives (if you were an early adopter), staking of the native OSMO token for validation, and voting on governance proposals for the blockchain.

It currently only includes Cosmos ecosystem tokens but has a wide range of pools to farm based on these tokens. It also includes a bonding system to incentivise holding for longer periods for increased yields. Options are 1-day, 7-day, and 14-day tie-ups for your pooled assets.

UST and EEUR stablecoins (from Terra and e-money blockchains respectively) are available for when it's time to take profits.

In terms of Comsos Dex competition I've found Osmosis easier to use than both Sifchain (see part I) and the gravity Dex on Emeris (which uses Atom's own Dex protocol). However Sifchain has far more assets due to its bridge to Ethereum.

There are already plenty of good summaries for Osmosis on Leo Finance so I won't talk about if further. Here's some further reading:
https://leofinance.io/@revisesociology/why-is-osmosis-doing-so-well-and-will-it-last

Here ends part three! Nine down. More to come! I'll try to get some kind of table summary going for part iv with some idea of where these blockchains sit in the crypto market cap rankings.