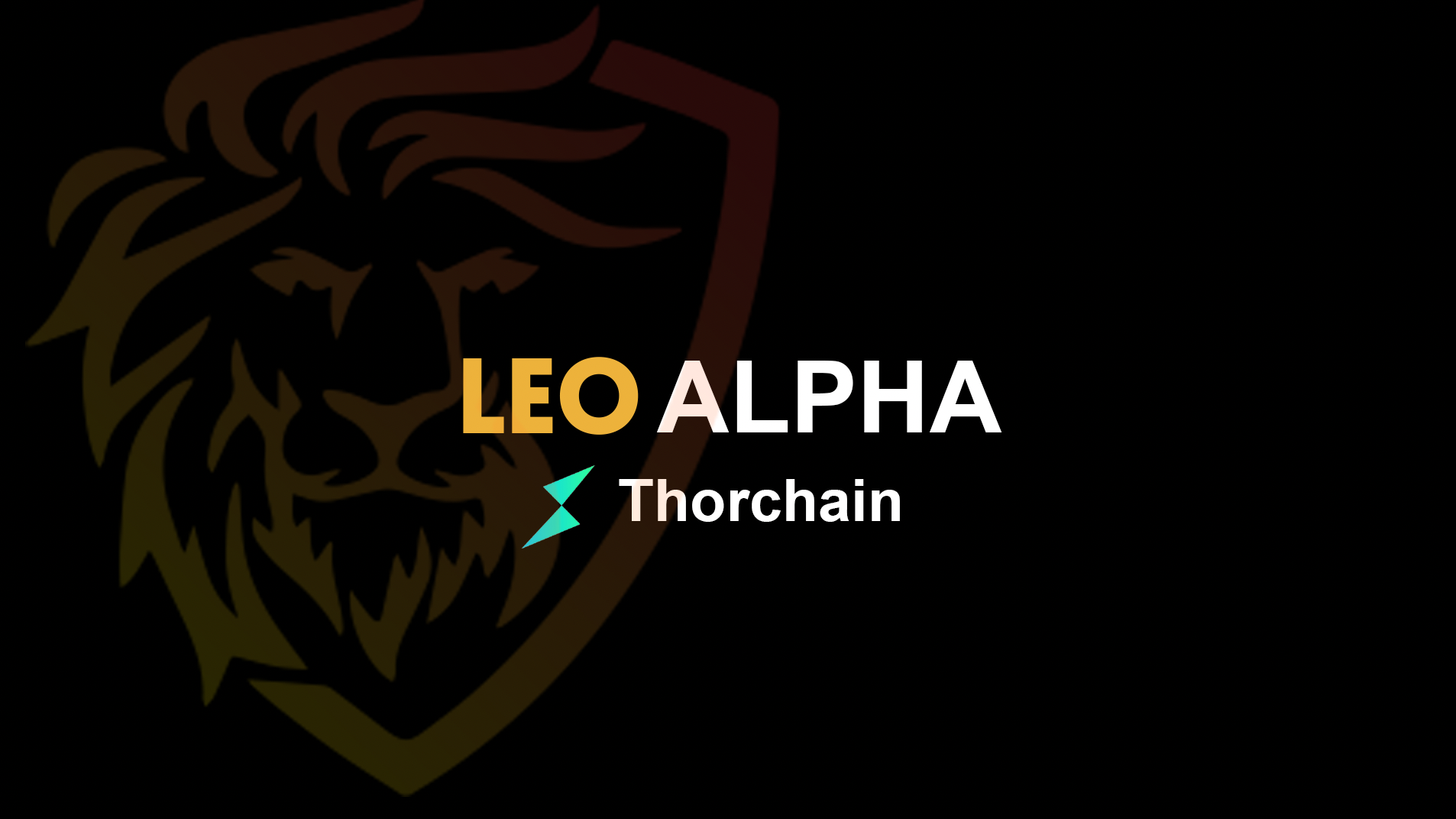 A post as part of the #LeoAlpha - Thorchain initiative created by @khaleelkazi. The aim of LeoAlpha is to generate research into specifics projects by leveraging the combined knowledge and experience of the LeoFinance community.

The first project is one that comes up a lot on LeoFinance: Thorchain. I will try to cover the general environment of the project, a little bit of the tech, and most importantly the competition.

Thorchain is a Tendermint-Cosmos SDK blockchain. This is the technology used in the Cosmos (ATOM) blockchain ecosystem.

Thorchain's niche is in cross-chain DeFi. It facilitates swaps between assets on different blockchains in an autonomous manner and organises the liquidity pools necessary for those swaps.

RUNE is the home-team token on Thorchain. It is the base pair for each liquidity pool and is used to provide the security and incentives to power the cross-chain swaps.

Thorchain is firmly in number (4) and has been the leading project in the development of decentralised exchanges.

To date, centralised exchanges have been the leading players. However there has always been a couterparty risk to holding cryptocurrency on exchanges. "Not your keys, not your coins." is the motto of house Nakamoto. Now increasing regulation and know-your-customer requirements have pushed the search for alternative options.

The ideal is to be able to trade cryptocurrencies:

The first of these requirements is the basis of DeFi. The second led to the development of Autonomous Market Makers (liquidity pools). The third is where Thorchain comes in, by including assets from many separate blockchains. If the fourth point can also be established then the genie is truly out of the bottle and decentralised cross-chain exchanges will be the future.

Probably the key point to take away from this section is that the potential market is huge, potentially the largest revenue stream in all of crypto. But at the same time there are many powerful players in the arena and the competition for control will be fierce.

I do not plan to cover too many details here. It is a book in its own right. But I plan to cover one key area for cross-chain Dexes in layman's terms - that being the extent of my ability on this subject!

Thorchain documentation talks a lot about native assets, as compared to wrapped assets, and also about vaults.

Wrapped tokens are representations of an asset on a different blockchain. For example wrapped BTC is an ERC20 token that represents Bitcoin on the Ethereum blockchain. The underlying native bitcoin for wrapped BTC remains held by custodians on the Bitcoin blockchain. Wrapped tokens can also be created by locking the native asset in a smart contract.

Thorchain enables cross-chain swaps using native assets. You send BTC from your wallet to an address on the Bitcoin blockchain. You receive ETH in your wallet on the Ethereum blockchain. There is no token wrapping in this system. This is an important comparison to other cross-chain exchanges which are based on wrapped tokens.

How does this work?

Thorchain watches the blockchains for which it provides swaps (like a police stakeout; two guys in a car eating meatball subs and waiting for a transaction to happen). When a user sends BTC to a Thorchain vault address on the Bitcoin network the Thorchain nodes register this transaction and translate it into a Thorchain witness transaction.

Thorchain nodes then forms consensus and processes the swap logic (assuming this is a swap transaction). For a Bitcoin to Ethereum swap two liquidity pools would be employed. Firstly a swap through the BTC-RUNE pool and secondly a swap through the RUNE-ETH pool. The purchased ETH can then be released from an ETH vault to the user's Etheruem wallet.

The transaction remains autonomous because the vault private keys are generated and used in a distributed manner through a consensus of nodes rather than being contolled by a single node.

By contrast, on wrapped-token cross-chain Dexes users trade between native tokens (those from the Dex chain itself) and wrapped tokens created by locking up assets on other blockchains. After trading, wrapped tokens can be returned to their native blockchain as desired.

2021 has seen an explosion of DeFi and NFTs. Each level 1 smart-contract blockchain now has an array of single-chain DeFi applications, typically with AMM pools, swaps and yield farming. Each of these chains will also have a host of new NFT galleries and regularly minted collections.

In my view, the next few months will seen a rise in interoperability between individual blockchains.
I have talked about this in a recent post:
https://leofinance.io/@miniature-tiger/interoperability-the-buzzword-of-the-autumn

This is arising because of the recent developments in communication protocols between blockchains. The logical conclusion of this view would be that many blockchains will soon be hosting their own cross-chain decentralised exchanges. As noted in the environment section, I believe the competition in this are will be fierce.

Lets have a look at some of the existing competition for Thorchain and some potential emerging rivals. For this I will only look at cross-chain decentralised exchanges.

Sifchain (ROWAN)
Sif is the wife of Thor. True story.

Like Thorchain, Sifchain is a Cosmos blockchain focusing on decentralised finance across many blockchains. It bills itself as "The world’s first omni-chain decentralized exchange."

Sifchain is already connected to the Cosmos IBC which gives it access to all Cosmos (ATOM) blockchains and tokens. It also has bridges to Ethereum and Polygon.

Sifchain is pretty new and the application is still in Beta. TVL $58m. Market cap $110m. I would note that they are currently pumping out liquidity incentives like the world will end, so the token price could suffer accordingly.

There's a nice article about it here:
https://medium.com/@multifarm_fi/all-bridges-lead-to-sifchain-4e125d9de1be 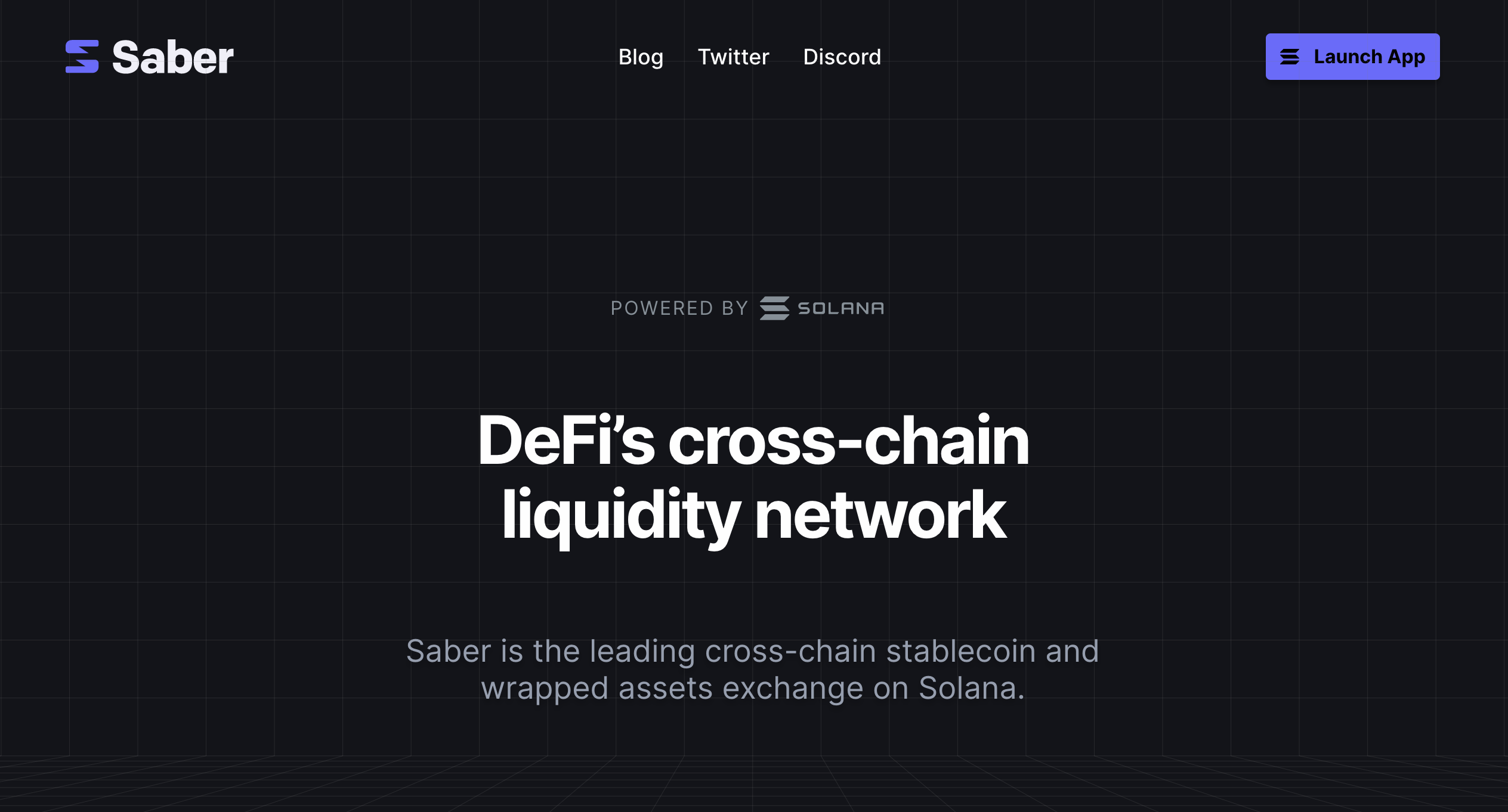 Saber (SABER)
A.k.a how to make it complex.

Saber is an application on Solana with the tag-line "DeFi's cross-chain liquidity network." It's probably a breakthrough but to me it just looks like a great example of how to overcomplicate things. 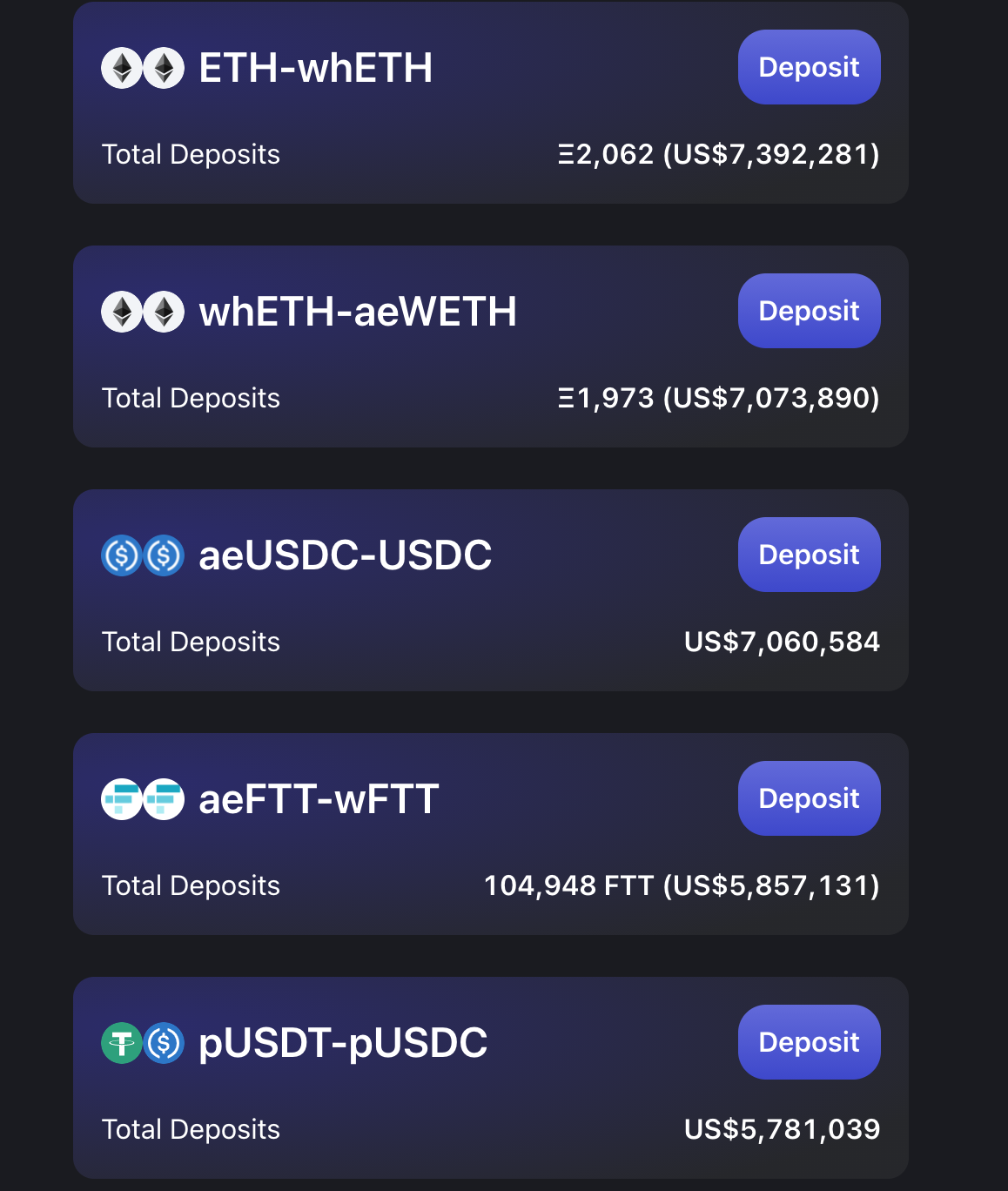 In case you are wondering "whETH-aeWETH" is a liquidity pool between Allbridge Wrapped Eth and Wormhole Eth. Allbridge is a bridge linking 7 blockchains. Wormhole is a different bridge. So two different forms of wrapped ETH. At least the impermanent losses should be low.

I counted 6 versions of USDT.

Still, they have a couple of billion dollars of TVL so I'll look at it again once I've had some brainfood. 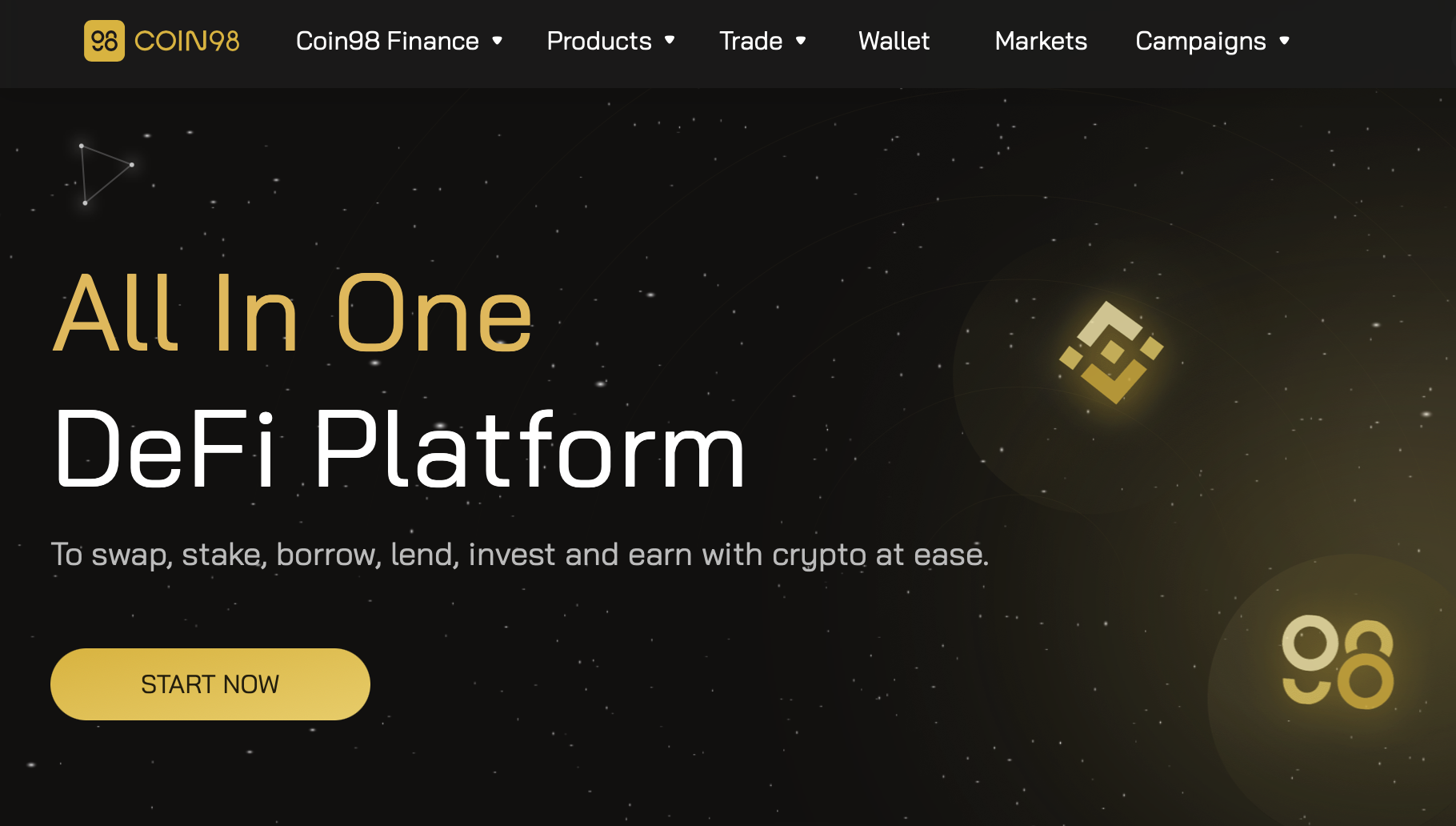 The project founder, Thanh Le, was an early investor in Thorchain. There's a bit of a theme there.

It was heavily promoted through the Binance launchpad.

I have to admit I haven't done much research into Coin98. But from early impressions I'd say that this is what crypto DeFi will probably end up looking like for the masses.

So it's more of an aggregator / simplifier than a cross-chain decentralised exchange. But once cross-chain DeFi exists in a few places, a multi-chain wallet application with links to these underlying exchanges and preferred pathing would allow users to exchange pretty much everything without knowing too much about what is going on under the hood.

I will leave this section there. As can be seen, there are already some competitors for Thorchain, and with increases in interoperability coming through Q4 there will be more on the way.

It is noted however that none of the above projects use Thorchain's approach to native assets and vaults, relying instead on wrapped tokens.

VeChain! Have been hodling that since it was VEN. Have some VeThor rewards too. I should check up on what they're doing.

As the market cap of Thorchain increases, I imagine they'll be able to hire more developers to work on integrations with the dozens, if not hundreds, of other up and coming blockchains. Another thing I love about Thorchain is they embrace competition, and encourage other teams to innovate on cross-chain trading.

I am sure they will continue to innovate and push their project forwards!

The question on competition that carrying out this research raised to me was: