The Future Potential Of wHIVE

By now, most have heard about wHIVE being created on Ethereum. This was the development of @fbslo.

While there are mixed opinions on the value to this for Hive, I wanted to try and connect some of the dots. It became clear to me after seeing some comments made by @cardboard. To start, wHIVE is just one piece to a larger puzzle. By this I mean that it is not meant to stand on its own. Certainly, it does bring in a DEX such as Uniswap into play. However, when looking at things from the broader picture, this is a small step forward.

So what is the value of wHive? Ultimately, it is going to come down to what takes place going forward. DeFi is an explosive industry and Ethereum is killing it right now. This is the epicenter where all the activity is taking place. Thus, being a part of that ecosystem can be highly valuable.

The goal, ultimately, is to get listed on some of the DeFi platforms that are in operation. This is where the payoff for Hive will occur. Suddenly, Hive will be part of the collateral loan world.

This is what Cardboard has to say: 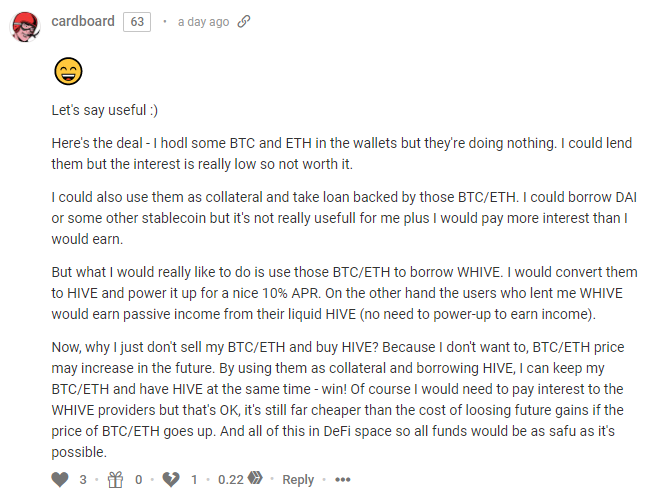 Notice how powerful that is. If we think about it for a second, we realize this just opened up an entirely new access point for HIVE.

Perhaps if we apply some numbers it will be a bit easier to see. I will take some liberties for simplicity of math sake by rounding off. The numbers might change slightly but you will get the point. The associated fees will also be omitted in this illustration.

We will presume one has .1 Bitcoin valued at roughly $1,200. This means that one could get 4,800 HIVE at 25 cents. Using an exchange, this could be easily done, the HIVE powered up and all is well. Of course, under this scenario, the Bitcoin is gone. Any price appreciation of BTC will not be realized.

Using the DeFi idea just mentioned, we could enjoy both worlds. We will presume there is a 150% ratio that must be maintained. Since Bitcoin is a bit volatile, we will play it safe and set a 200% ratio (meaning we have twice as much BTC value as the HIVE we took out). Here we see the $1,200 gets us 2,400 HIVE. We use this to power up.

Over the course of a year, we actively engage in Hive activities. The HP is put to use and does attain the 10% return Cardboard mentioned. This gives us 240 HIVE.

At the end of a year, we pay back the 2,400 HIVE, unlocking the BTC. Now we are left with .1 BTC valued at $1,800 and 240 HIVE. In the real world, we would have to factor in interest and other fees but I think the point is understood.

By opting for a loan using BTC as collateral, we are able to leverage our position higher, gaining benefit from both ends.

Of course, there is always a risk, so what are the dangers here?

To start, if the 150% ratio is not maintained, we could be liquidated out. This would occur if the price of BTC feel greatly. Of course, the HIVE then becomes ours which will offset the loss of the BTC. We might actually come out a bit ahead if BTC drops a great deal while the price of HIVE remains the same or goes up since we would be looking at the BTC/HIVE pricing.

Of course, we always have the option of adding more BTC to the loan to maintain the ratio required. This would negate any closing of the loans and keep things in effect.

The Value Of Hive Power

Here is where we see HIVE (wHIVE) standing out. When we look at the DeFi world, we see all kinds of tokens being created. They ultimately serve the purpose because they can be used to interact with other tokens, thus realizing the token appreciation along with the original token staked.

However, Hive offers a different option to people. HIVE has value to those using the platform in the form of Hive Power. This adjusts people's standing on the network, influencing a host of different activities they engage upon. To start, voting in the proposal and witness pools is affected by the amount of HP one holders.

That said, there is even a more direct impact: HP affects VP which can dictate what one gets out of the reward pool. The higher one's vote, the more value they are giving, This ultimately comes back in the form of curation rewards as well as possibly a larger following. It is obvious those with the larger amount of HP tend to have a greater following. This can result in larger payouts of individual activities.

Thus, unlike many of the DeFi tokens, HIVE have an enormous utility for those who are actively engaged on the platform. In this scenario, it can move far beyond simply speculation and, instead, be a tool to help increase one's standing.

It is this viewpoint that also helps to offset another one of the potential risks of the loan mentioned above. There is the possibility that, throughout the course of the transaction, the price of HIVE does fall. Hence, priced in USD, the return on that end of the transaction could be less. This point is less significant if one is looking at the value of HIVE for what it provides on-chain as opposed to what its value is for trading purposes.

Once again, Cardboard hit the nail on the head. He showed where wHIVE has a bit different backing than many of the other DeFi tokens being utilized. 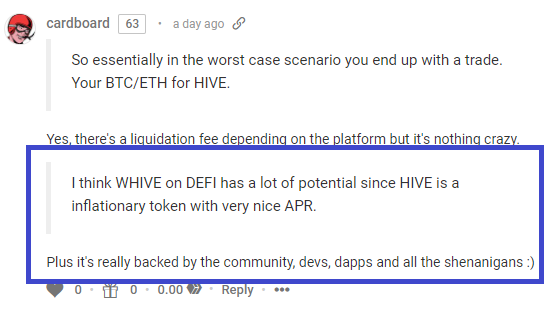 Essentially, there is another layer to the Network Effect that could take place.

It all holds interesting possibilities.

The comments cited can be found in this post: 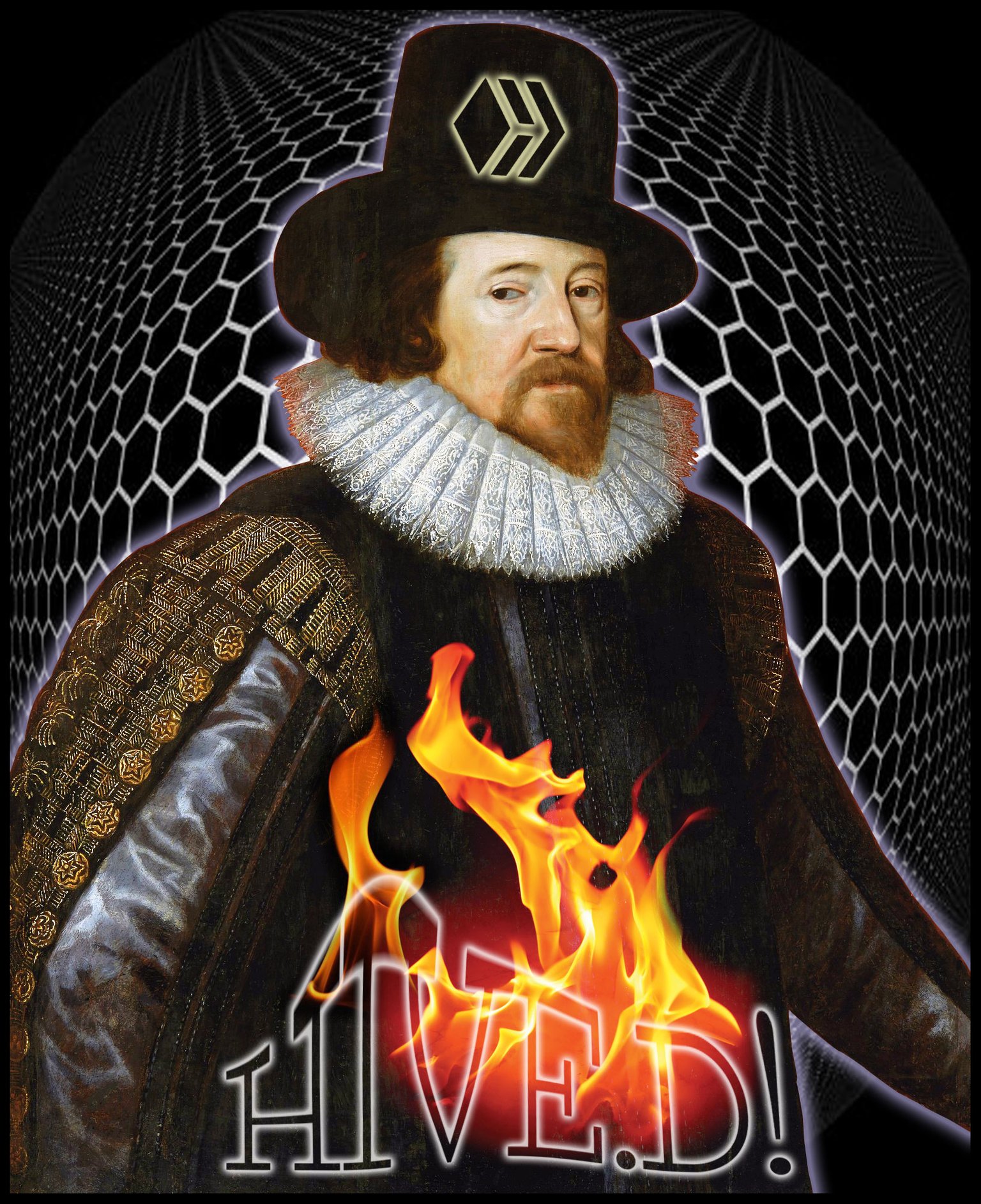 You locked bitcoins to get hive. Its like pawnshop where you put some valuable item like gold ring, to get cash. So similarly if price of Gold goes up 200%, and cash value drops 50%, pawnbroker is happy, because value of stuff you give him to secure your loan is worth more.

Same situation in other scenario, in the article we talk about situation when we lend BTC for HIVE so what is really important for us is BTC/HIVE ratio. If the both fall or rise in dollar terms, it's not affecting the ratio of locked/borrowed goods.

Different situation happens if you lend bitcoin for DAI, and then buy HIVE for borrowed DAI, what we can do before wHIVE, but it gives extra exposure on crypto to fiat price fluctuations, and thats why wHIVE is helpful.

Thanks, that answers some of my question marks.

I've already made a post, that will be published in few hours, where I explain the whole Hive DeFi idea (which you already did better, lol) and use it in practice :)

The thing is, we can already use our ETH and BTC savings to generate new DAI stablecoins (without need to sell those savings) and then use those DAI to buy Hive :)

ETH gas fees are really high right now. What alternatives exist for DeFi exist for Bitcoin and hive outside the Ethereum blockchain?

As far as I know, none :D
I meant EOS and Tron are trying to get into defi but ETH is the chosen one.

lets hope we get listed on a defi platform then. Whats the chances of it happening in future? soon? maybe? unsure?

Solid question. Plus...who decides what gets listed on DEFI platforms? Would we have to pay a fee for a possible listing?

It's good marketing for them to add HIVE.

Things are about to get more interesting on Here!

Great article, I personally don't know what to make of wHIVE myself but any new kind of project could be interesting, so I guess we'll have to wait and see how it turns out.

So many opportunities popping up every day. It's great to see this happening.

Thanks for this. I didn't know there's wHive yet. This looks nice. Let's see how it brings value to Hive

Thanks for this. There's certainly some quality WHIVE content on the stream today.

I'm not sure I want to take the plunge just yet, but the ability to put my idle BTC to work in the form of HP, is certainly enticing.

Definitely watching this space with interest.

Well, there’s an idea. But it’ll be important to know what the fees for a 1 year loan would be.

Hopefully lots of liquid hive gets sent to provide liquidity

Being able to loan out and receive HIVE as a loan type would be interesting.

I'm pretty familiar with different lending protocols at this point and have actually used a collateralized ETH vault to generate DAI and then buy HIVE with it.

The downside to doing it that way is that I have to buy HIVE in DAI terms (DAI is pegged to $1, so basically $ terms).

So I had to buy HIVE at the current price of when I took out the loan. Now I have to hope that HIVE doesn't crash in USD terms by the time I'm ready to pay back the loan. If it does, then I'll have to convert back into DAI at a loss from HIVE.

With HIVE as a loan type, I'd be able to do the same ETH collateral vault but take out a loan in HIVE terms as opposed to USD (DAI) terms. Then, I don't have to worry about the price of HIVE crashing because when I pay back the loan, I'm paying back the equivalent amount of HIVE.

The upside for the Hive blockchain is that it simply adds layers to the digital economy here. It's important to have these kinds of protocols but the marketing is where the real sauce is at. When wHIVE gets listed on 1 or more lending protocols, the marketing that the token gets in terms of investor buying pressure will be huge.

It's a win for individuals on this chain who HODL Hive and want more use cases.

It's a win for investors who want to hodl HIVE for APR but not power up (something @theycallmedan talks about frequently).

It's a win for DeFi protocols if they get the thousands of Hivers out there to use their platform.

Steem-engine use to have accounts where you could trade Steem for BTC and LTC. These were some type of NFT BTC , do you know if there are any plans to have BTC NFT or ETH NFT on hive ENGINE? If hive engine could provide wrapped ETH or wrapped BTC that we could borrow hive HBD against we could hodl BTC or ETH while using half its value to BUY and power up hive for use on the platform?