From The Fire: The Inkwell Fiction Prompt #17 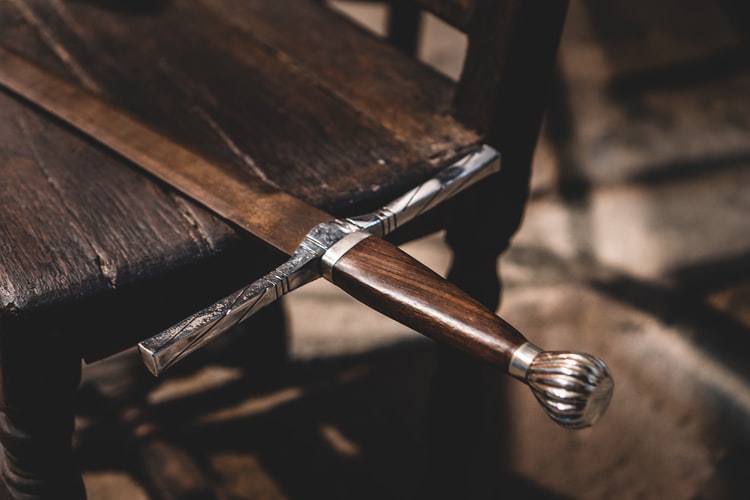 The windows were wide open, allowing fresh air into the workshop. Behind me, I could feel the dying heat of the furnace.

I got up from the workbench, stretching my muscles. Then I took off the thick gloves and apron.

Above the fireplace, I looked at the clock.

"Less than ten minutes," I muttered, my guest was soon to arrive.

Feeling my heart race in anxiety, I walked to the workbench where my freshly forged sword lay.

It had a shiny pommel, polished over and over again. The hilt was covered in leather leading to the blade itself. It was a double-edged sword, its surface was shiny and reflective. Tapering down to a sharp point.

It had taken me three days of painstaking work. Continuous hammering and heating, polishing and cooling.

And now, as I looked at it, my anxiety faded away. It was such a beauty. I had taken a dirty old steel and turned it into this magnificent piece. Through the magic of fire and heat, like the Phoenix from the ashes.

My family owned one of the sword-making plants in the country. It was amazing how many people bought these epic weapons, keeping us in business. To manufacture in commercial quantities, we used computer-controlled machines that made swords in their hundreds per day.

The process was all computerized, a simple routine. No room for creativity.

So I suggested to my father that we create a department in the Plant where swords were made by hand from start to finish. Where the blacksmiths were allowed to be creative.

"That is a beautiful idea, Sarah." He had replied, not taking his eyes off the stock report before him. "But the reason we use those machines is that they deliver faster than humans could ever. Manufacturing a thousand swords per day doesn't leave a lot of room for creativity."

"And that's why your swords are cheap, no offense. A handmade sword would take at least three days for perfection. But it won't be just for anybody, it will be for the elite. Each sword would be unique to each customer, which means there would be no mass production. We'll make them one by one."

Slowly, he dropped the tablet and swiveled his chair to face me. "You've got a point, customers would prefer handmade over machine made any time any day."

"Yes father, but only a few would be able to afford it. Because we'll charge them an arm and a leg for it."

He smiled then, and I knew I had him interested. My father was a true businessman, always looking for new ways to make people give him more money.

"I like your idea, Sarah." He muttered, pointing his pen in my direction. "You are your father's daughter."

I smiled, waiting for him to finish speaking.

"But I can't just approve this, you have to prove to me that handmade sword can be more valuable commercially than machine-made."

"You want me to forge a sword?"

"Yes." He replied, picking the tablet once more, "you can still do it right?"

"Yes, father." I had learned how to forge swords since I was sixteen. Courtesy of my grandfather.

"You said it takes three days to make a perfect sword, right?"

"I'll be at your workshop on the fourth day. Make me proud baby."

And he dismissed me.

And now, less than two minutes to his arrival, I slid the sword into its sheath. Then I hung it on a hook.

I was seating at my desk when he walked in. But he was not alone.

"These are the other major shareholders of the plant." He introduced us, "if all four of us like your presentation, your wish will be granted."

I let out a deep breath. I had not planned for this at all. I had thought I would be presenting only to my father. With him, failing would have been easier to handle.

"Well, let's get to it." That was all I said as I forced myself to smile, masking my anxiety that was back in full force.

I took out the design of the sword, showing them my sketches. Then I explained the process of forging manually, comparing it with that of the machine.

"One particular sword for one particular customer," I told them, getting the sword from the hook and pulling it out of its sheath. "Be it, man or woman, it's design and craft would be tailored to suit the customer."

I placed the sword on the table and then took out another sword. It was one of those manufactured in the plant using computerized machines.

"Recognize this?" I asked, when they nodded, I placed the two swords side by side on the desk. "Can you compare the beauty?"

The design of my sword was intricate and complex. It was pretty obvious it was made by hand, from the crest on the blade, its sharp and smooth edges up to the form of the hilt. It spoke of creativity at it's best. Whereas the plant-made sword, while beautiful, looked plain. Typical of works done using a template.

"And now," I picked the plant made sword and fixed it on to a clamp. I then picked my sword as well, twirling it between my fingers. "Time for the test of strength."

The men watched me expectantly.

I lifted the sword high and brought it down on the blade of the other sword. There was a loud clatter as the plant-made sword broke in two, one piece falling to the floor.

I turned then to the men, my father was smiling at me. But then, so were the others.

I had convinced them.

"Beautiful." My father told me, stepping forward. "We'll begin work on creating that department. There's a catch though."

"You get to head the department."

I smiled then, sliding the sword back into it's sheath.

The End.
This story is written in response to the Inkwell prompt for the week Action, Dialogue, Narrative. Feel free to check it out.
Thank you for reading.

Congratulations @bruno-kema! You have completed the following achievement on the Hive blockchain and have been rewarded with new badge(s) :

Great story @bruno-kema! There's nothing quite as beautiful as a hand-forged sword. I'm glad Sarah's father gave her the chance to prove that to him.

Yeah... And she stood up to the challenge.
Thank you for reading, i'm glad you enjoyed the story.

You've captured some great family dynamics here, @bruno-kema. And the conflict, while subtle, is strong. Sarah must battle the new age and stand by what she knows to be true about the quality of hand-crafted swords, even as her anxiety gives her pause when presenting her work to the stakeholders. Your character development is excellent. This is a great read!

Thank you very much, i'm glad you i posted in this community.

No doubt Sarah's passion for swords will make every work she does more beautiful than the last.

Friend Bruno, I'll buy you the link to my last post. I would love for you to read it. It's not a story of my creation. However, it is magnificently scary.

Nice to say hello and to have read you again. I send you a big hug ;)

Hello dear @mayellig, where have you been all these while? Hope you are good? Welcome back😁
Thanks for your kind words on my story, i'm really glad you like them.
And thank you for the link, you know i like scary stories, i'll surely check it out.
Big hugs😘

The story caught my interest from the moment Sarah decided to open the other department. Adapted to the modern and also to the entrepreneurial. The story has everything to please the reader.

Thank you @ricardo993, the secret to business is expansion. And Sarah brings that to the table with her marvelous idea.
Thank you for reading, i'm glad the story pleases you.

You have a way if writing that shows you are a very natural story teller. I very much enjoyed reading this piece. I found it believable and there was something in the style that kept it calm and yet progressed the story apace right up until the end. Thank you!

Thank you very much @ubani1, i'm happy you enjoyed the story.