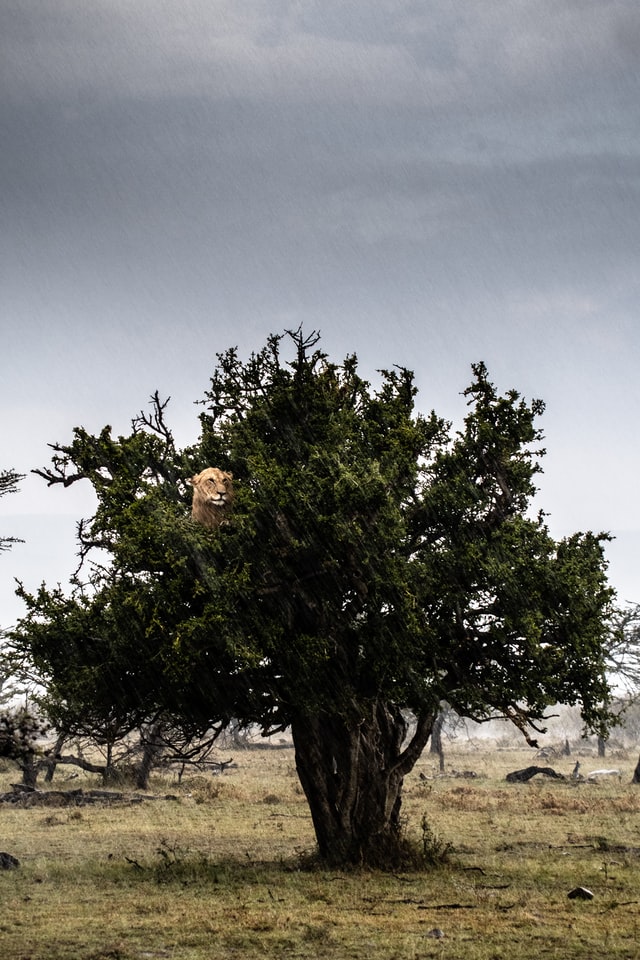 Once upon a time there was a tree so lush and rich that it bore all kinds of fruit. Everyone loved it, for it had every flavor in the world. It seemed to attract the freshest winds to itself and, if that were not enough, its shade sheltered even the largest creatures ever seen. But one morning its visitors found nothing but a tree with a few coppery leaves and dry, hollowed-out branches, and no one knew the reason for this horrible change. All was sadness, mystery.

The animals that used to visit the magnificent tree were asked if they had any idea what was going on. Some, deeply puzzled, answered:

"I don't know what is going on. Not even in years of drought has the Great Tree stopped being greenish."

"It must be that its time has passed. It is already in the heaven of plants."

"Don't ask us. Ask the newcomers, we don't know their ways."

A great debate then broke out among the animals. The new ones and the old ones. All tried to solve the mystery of the tree, but none was certain.

Finally, the new faces were asked.

"No. Not us. We're just passing through."

"We dig the earth, not the trees."

"We just got here this morning. Mmm, that's a hit tasty mango. Wouldn't you like some, buddies?"

None of the new visitors seemed to have hurt the Great Tree.

The tree, amidst all the talk and tension, became even more saddened and several of its branches fell like rhinoceroses to the leaf litter. Such a spectacle caused some to run screaming like madmen; others to embrace each other while sobbing.

In the midst of the commotion, one of the spider monkeys spotted a large yellow animal from the top of the tree. An animal that, although far away, made more noise than an enraged elephant. A quick monkey sounded the alert and then the giant tortoise exclaimed:

Many birds immediately flew away. Rodents and small reptiles escaped just the same. But the large mammals decided to stay and face what was left of the tree.

The giant tortoise, who had already outlived them all, asked:

"Don't you know that this tree is only the survivor of a forest that humans themselves destroyed?"

"We will defend it at all costs."

"There are hundreds of us. He is only one."

And with similar phrases the defending animals took courage.

The tortoise turned around and in half an hour the yellow animal that was tearing up the ground and deafening the sky was as big as the tree itself. But as lions, elephants and rhinos were about to act as the first line of defense, all were shocked to see how the human driver continued on as if the great tree nor any of them existed.

This fact was celebrated, but no solution to the problem was found afterwards. A few days passed and the remaining animals had no choice but to say their last goodbye to the Great Tree. With tears in her eyes and legs placed on her chest, the chief of the hissing cockroaches said:

"Farewell, home of all!"

The sun that day seemed more merciless than ever. The sand blew, punishing the forced passage of the helpless animals. Thirst and hunger increased unceasingly. At one point in the journey, a baby elephant fell half fainted and its anguished mother quickly sought to lift it up with her powerful trunk. The animals passed by her and she noticed that the hissing cockroaches were nowhere to be seen. She alerted everyone to this and soon they decided to send a hawk to check the area.

The hawk searched around and found that the Great Tree was covered with lively cockroaches that agitatedly lifted leaves and fruits that the tree once bore. This was a sight of horror to the hawk. He almost exploded with helplessness, but flew back to warn everyone, instead of eating the dastardly cockroaches one by one.

A few miles away, the hawk spotted the group of animals. But he was surprised when he saw that they were all still. Still around the yellow animal.

He hastened his flight, foreseeing the worst. To his surprise, the hawk found the animals listening very attentively to the human. He was telling them that he was not coming to destroy trees. Instead, with his vehicle he intended to disinfect the area of the dangerous hissing cockroaches. His mission was to protect the Great Tree, which was Heritage of the Earth. The only one left. Then, the human emphasized:

"This is not the first time they have done this. They have been attacking for millions of years, according to findings. They intend to take over the world and there has been no one to tell them off or stop them because the other animals lose their livelihood trees like you and die."

The mother elephant from before asked indignantly:

"And you humans who attack everything, why haven't you attacked and disappeared them?"

"Simply because they are too slippery and resistant", answered the human.

The hawk landed on the back of a buffalo and told what he had seen. Everyone was petrified at the confirmation of the betrayal. Then the hawk flew back over the herd and circled in search of the giant tortoise. When he spotted it, he swooped down like a flash and asked him:

"You who know everything, why didn't you warn us the hissing cockroaches were of this ilk?"

"I would never think so of the oldest visitors to the Great Tree. Compared to them, I know nothing."

Then the human warned:

With the remaining energies of all the animals, there was a counterattack. Primates and birds went for the cockroaches celebrating above among grayish branches, and elephants, rhinoceroses and buffaloes for those lying below around the trunk in a shattering stampede.

When some of the cockroaches thought they could escape by hiding underground, the moles surprised them. One after another.

Finally, the animals of the great tree celebrated this triumph and the human collaborated to water the Heritage of the Earth. This mega-survivor regained its colors and flavors in the following days since everyone loved it.

It seemed to attract to itself the freshest winds and, as if that were not enough, its shade sheltered even the most respectful creatures ever seen.

Thank you all for taking some time to read it!

This is an interesting story, story about wildlife, nature and animals.
Animals that understand the importance of the great tree and how they stand to defend it, made it more interesting .

Yes, it is one of the several morals of this story to think about.

A fable that tells a story of a singular character, because, although it apparently ends with a "happy ending", like most traditional fables, in truth, it is a denouement full of irony. Interesting ecological vision. Greetings, @gabmr.

Your post has been upvoted by @celfmagazine, an autonomous initiative in favour of quality content on art and culture. Support us with your vote here to maintain and improve our work. Join our community

It's truly full of irony. Sometimes, there is no better mirror to see who we are than Nature itself.

The human for once is in common cause with nature. You pick a truly despised creature to fault for the destruction of the last tree. Cockroaches are not only despised but truly do spread harm around the world.

The tone of this story, and the voice of the narrative are consistent with a tale of mythic proportions. Well done.

Not all humans are bad. Not all animals are necessarily good. I wrote this story to highlight that, and a few more things..

Your words and support make me feel great.

A tale with the characteristics of animal fables that borders on the line of origin myths in one respect, as it does not explain why cockroaches still exist.
It is an engaging tale filled with the sounds of the jungle.

Thanks for you pleasant comment. I really appreciate It.

This post was shared and voted inside the discord by the curators team of discovery-it
Join our community! hive-193212
Discovery-it is also a Witness, vote for us here
Delegate to us for passive income. Check our 80% fee-back Program
$0.00
Reply
[-]
kawsar8035 (68) last month

A written story about the extraordinary wild nature.

"There are hundreds of us. He is only one."

I really like this line. In real life, if anything can be done together, it is possible to defeat any evil power. Great writing.

Thank you. Yes, together we are stronger. There are numerous cases throughout history we can prove it with. We just must remember them when hard times arrive.

Okay this is one interesting story you have written. Truthfully, I just wanted to scan through it but you got me hooked lol, I was like "who is the culprit"? Haha. The animals coming together to defend and protect the great tree is beautiful to. I like the monkeys though. 😁

Knowing who's the culprit always going to bring curiosity around. Welcome to the club😅

Thanks for reading and your kind words.