Two dice cards One is epic and one is common both are giving me swear headache on the battlefield. Hive dip is another headache as well. I've been accumulating decs for dice packs. But guess what I spent my decs on purchasing this damn Grenadier. I hate it when people use this card against me and I still don't have this card. I had level 3. I purchased few Bcx last night and I was able to make it at least level 4. Only 2 more BCX needed in order to make it max.

I am spending decs on purchasing cards instead of the hive. Hive situation is really critical and I just can't waste my hard-earned hive by purchasing cards with a hive in this dip.
Truth be told I had a really tough time while achieving champion 1 this season. Just because of these new dice edition. Almost everyone has these cards. I avoid playing extra battles just because I don't want to lose battles. It is another level of frustration. I just complete my quest and that's all. I just realised all this while you play without fear when you have all kind of cards.

Why am i complaining? Well, what can I do hive situation is not letting me buy these cards. So I have only one way. If I don't want to suffer anymore then I will have to buy at least these two card using decs. So purchasing packs decision is cancelled now and I am going to max Grenadier & Battering Ram.

This 2 mana common neutral monster with opportunity and chatter abilities is something else. Battering Ram is the most ruthless beast in the splinterlands. The way it shatters all the armour is really annoying. Lore of Battering Ram says they are not very large or not incredibly powerful but the attack of the Ram is indeed powerful.

When we look at its stats we get to know that you need 400damn BCX if you want to max this card. 400 x 0.06= 24$. You need 24$ to max this tiny Ram😂. Splinterlands this game is for rich people guys don't play with the emotions of poor people like me😂. Now if I want to max this card I need 24$ Wth. This one is not the only card you need. You want almost all dice edition cards in your collection especially the summoners :P XD So there is that.

now I get the reason why people are getting frustrated and leaving the game. Right now people prefer to play delegated accounts. But your delegated account should also have these cards otherwise it will become frustration instead of fun. And I am actually dealing with this frustration that is why I know how it feels.

I will see a few more days if this frustration goes over my patience level I will think about it seriously.

At maxed level Battering Ram gets 2 melee attack which is pretty strong if you are using it with an inspire ability monster then this 2 mana monster can give you huge benefits on the battlefield. Although it gets shatter ability at level 6 yet if you are playing a maxed deck you need it at max level.

Just look at its speed damn speed 5 at max level. So just imagine if we are using Brownie which inspires and increases speed then only this 2 mana ram would be out of control lol. 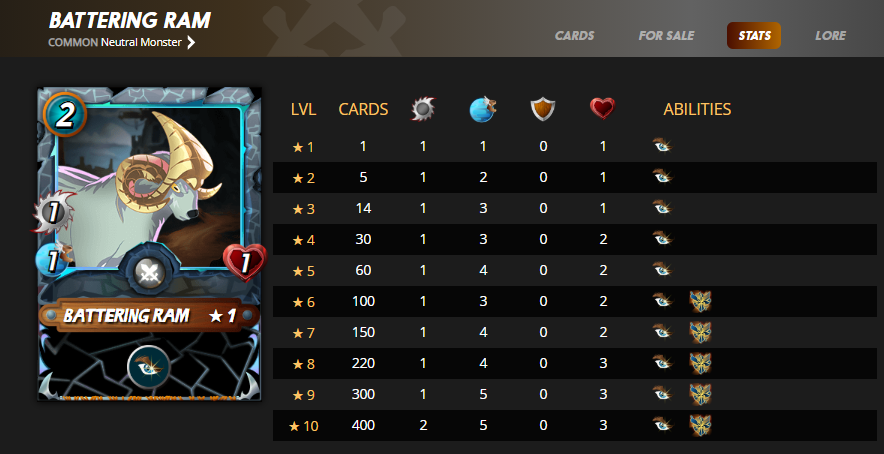 Grenadier is really very powerful 3 mana dice epic. Especially in reverse speed. People are using this monster madly. And I don't like it when they use it against me they should know I don't have this card yet 😂 Just kidding.

Untamed tournaments are now untamed and dice edition tournaments. Before you were very limited in the choice. I used to think Untamed game-winning depends on the right selection of splinter in the certain rule set. But now dice monsters have changed the whole game. If you don't have dice cards then don't bother to play those tournaments and don't waste your time. Because They way they kill you it becomes a real pain. But If only I listen to myself. I still try with my delegated account. And yes I don't play with my own account because I know I am never going to win my cards are low level. I try with a delegated account with the hope that maybe rules would favour me and it happened in the last tournament anyway.

So now you see how important these cards are?

Anyway, total 45$ needed to max only two cards there you go :P XD. It has really super cool abilities. Grenadier can be used in any rule since it has oppress ability but especially useful in reverse speed. In reverse speed, we all use Lord Arianthus so just imagine your opponent is using Grenadier which has 3 ranged attacks at max level and also gives blast upon every attack. If you use this card with Selenia sky then It will have 4 ranged attacks and that attack is enough to take down your Lord Arianthus.

I have no choice but to shop. I love this game so there is no question about leaving so I will be buying cards :(.

If you want to play splinterlands then SignUp Here

These two cards are incredible. I alteady maxed the Ram but still wait for a better price on the Grenadier.

Very nice writing Xawi. I really got into that Grenadier dude! Good thing you are making them power up and I am sure soon it will be your opponents that will get a headache in the battlefield! 😉

I am waiting to buy these two cards so I can level up but their price is increasing or consistent. At Max level and low mana battle they are awsome