What Would Jake Do?

Jake wouldn’t tell anybody to ask that question.

He would tell them what he wanted to tell the world today at his sentencing hearing.

‘What Would Jesus Do?’

He did make sure I was listening today as the Prosecutor established a narrative of Jake absolutely not being a ‘peaceful man.’

He did make sure I was listening today as the Defense Attorney loquaciously danced the verbal dance he needed to in effort to serve Jake.

He did make sure I was listening today as the Judge had his breath taken from him by a peaceful man standing in Truth ready to humbly ‘accept, respect, and endure’ sentence and his judgment. 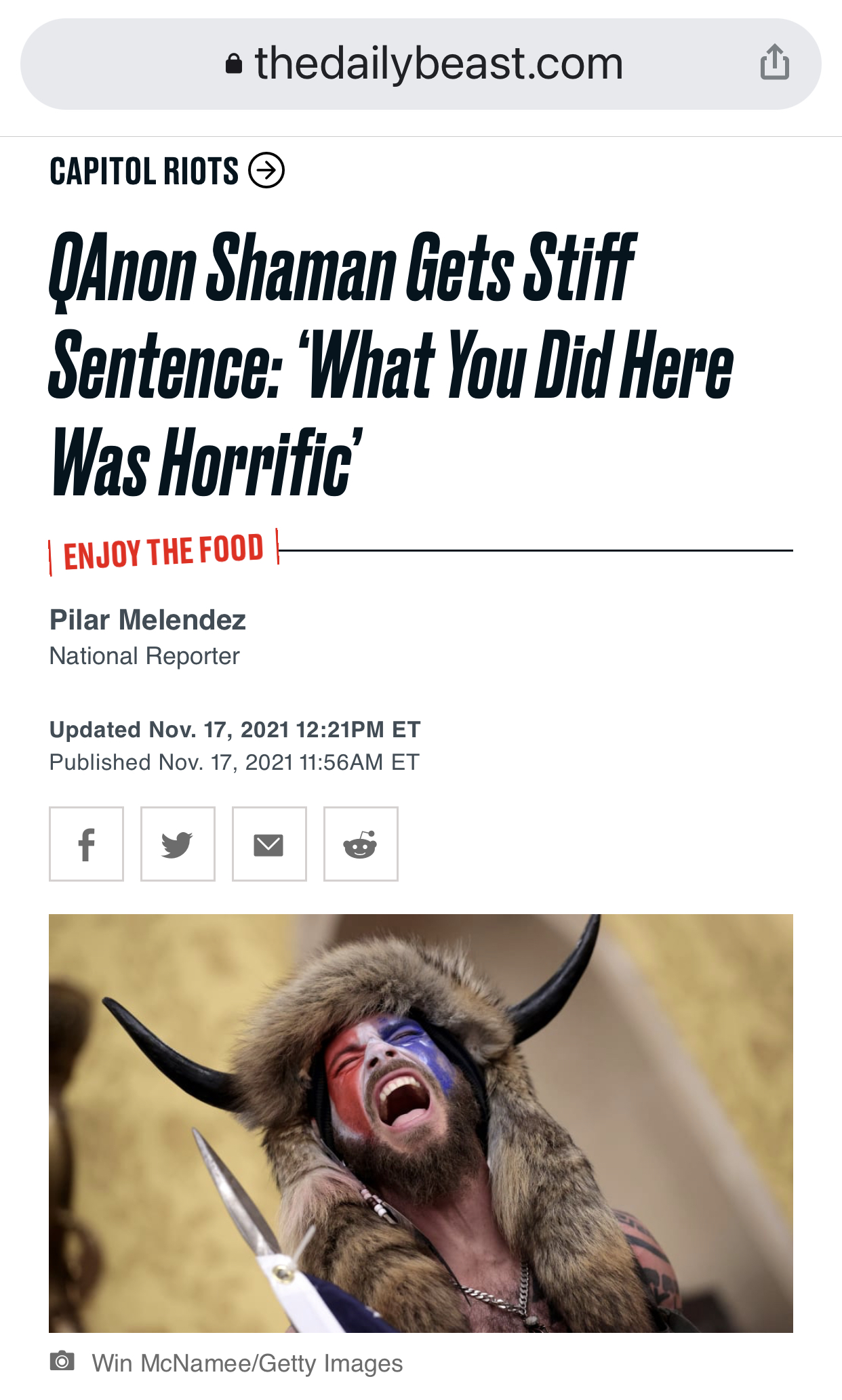 And of course Will Sommer and his team of Beast World media fucked him.

Will Sommer doesn’t care about What Jesus Would Do.

You shall not give false testimony against your neighbor.

He doesn’t take Commandments from Jesus.

When I felt the Spirit of Truth flowing from Jacob Chansley during his unprecedented testimony today I started taking notes. I cannot speak for Jake. I have yet to be blessed with meeting Jake. Like another friend of mine whose cause I took up while he was imprisoned, Jake likely has no idea who I am.

Nor should he because I failed him on all except the local level.

His ‘selfless service to others’ was not accepted or capitalized upon by we others and was diminished by other others.

That was one of the things Jake mentioned immediately this morning. That both Jesus and Ghandi preached ‘selfless service to others’ as the Way and that he was committed to being that same type of guy today.

The Spirit did not let Jake down.

When you are brought before synagogues, rulers and authorities, do not worry about how you will defend yourselves or what you will say, for the Holy Spirit will teach you at that time what you should say. 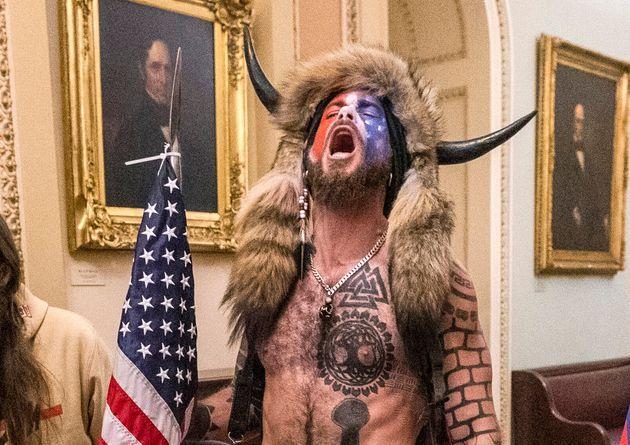 This isn’t about me but shame on me if I do not already have inextricable associations with Jake Chansley though we have never met. I am not yet under the persecution he and @austinsteinbart have both suffered already. Jake repeatedly owned responsibility for his own persecution today.

He said ‘men of honor admit’ when they are wrong. He said that to the judge today while accepting full responsibility for what was clearly a trap designed to make him the face of a movement primed ahead of time to leave him behind.

If I end up in front of the same judge I may regret saying that.

So be it. Spin spin.

Jake wants people to ‘see him’ for who he is. A peaceful and loving man. I heard him say that dozens of times as I was attempting to counter the initial Mockingbird news segment against him.

135 people were on the call today when I dialed in.

I wonder how many others on the call and in the courtroom had their breath taken away?

I’m going to paraphrase some things I heard the Spirit say today through Jake. They are from notes and are not exact but I promise you they will be closer to What Jake Actually Said than what you will get from those who are allowed to broad-spell-cast. I called Jake a hero- video of Jake and stand by my appreciation for his unsung and yet to be sung victories. Jake was clear during the hearing today that all the great spiritual leaders hold the ‘service to others being service to God.’

We are all servants and all who had ears to hear Jake today in front of judgment heard Jake say that more than once.

Those who know Jake know this has been his ethos his entire life. I suspect it to be why he has had the lifelong question that Albert Watkins focused on today...

‘Why am I different?’

At this I fell at his feet to worship him. But he said to me, “Don’t do that! I am a fellow servant with you and with your brothers and sisters who hold to the testimony of Jesus. Worship God! For it is the Spirit of prophecy who bears testimony to Jesus. 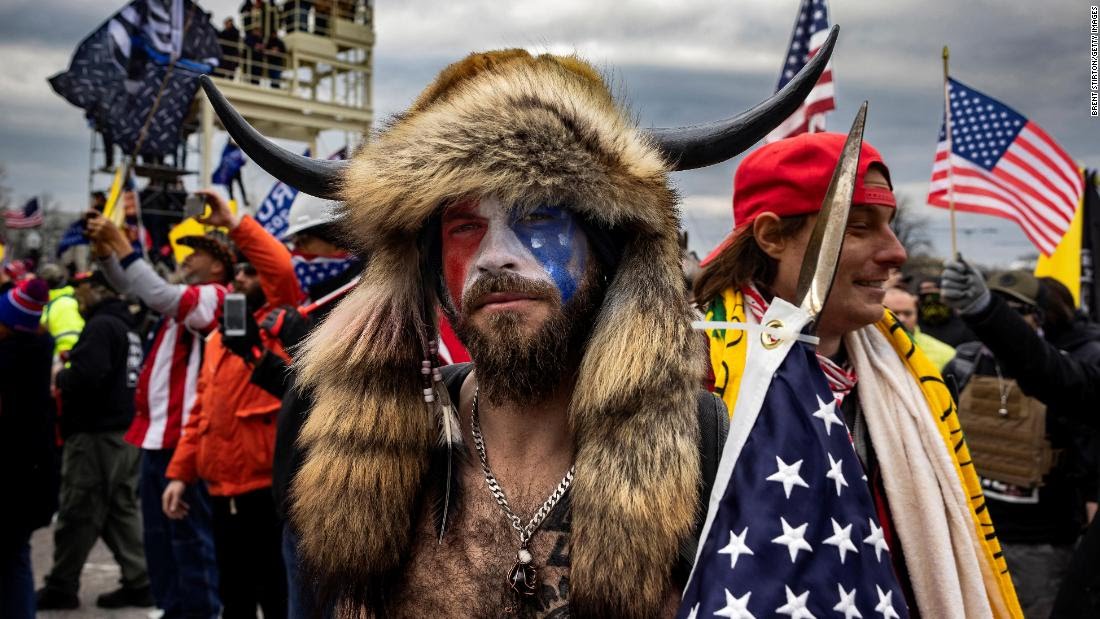 He put the horns on to protect people at all of the protests.

He was at the BLM protests to reach the Spirit Of Truth he could find within those groups because he loved them as much as those branded as ‘patriot.’

While Jake would not want the label ‘hero,’ those who could see him as such abandoned him and let him be risen up as an idol against them.

Maybe one of the guys or girls who did that to Jake will get The Rolling Stone Cover.

Jake discussed with the Judge the emotional depths that solitary confinement took him to. The strength in his voice as he described the ordeal was evident.

He was clear in front of pending judgment that we are not supposed to judge each other. While Jake was ready to accept his he told the world that Jesus insisted we don’t assume God’s role of judge with each other.

Do not judge, or you too will be judged. For in the same way you judge others, you will be judged, and with the measure you use, it will be measured to you.

Jake’s message of repentance today was so much less the typical Defendant’s message that the court pointed out the uniqueness of it.

The Spirit got the Judge with that 34. 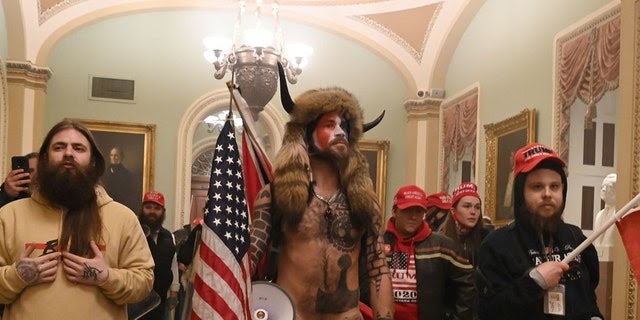 Jake spoke of the importance of viewing each other’s perspectives. ‘Putting himself in the shoes’ of not only the Judge but the Accusers.

As you are going with your adversary to the magistrate, try hard to be reconciled on the way, or your adversary may drag you off to the judge, and the judge turn you over to the officer, and the officer throw you into prison. I tell you, you will not get out until you have paid the last penny.

Before I pour too much Bread into this let me take a moment and quote the specific scripture that Jake Chansley wanted the world to hear today in his opportunity to be seen for the peaceful man many of us will attest to him being.

Jake started with ‘love is patient love is kind...’

Love is patient, love is kind. It does not envy, it does not boast, it is not proud. It does not dishonor others, it is not self-seeking, it is not easily angered, it keeps no record of wrongs. Love does not delight in evil but rejoices with the truth. It always protects, always trusts, always hopes, always perseveres. Love never fails. But where there are prophecies, they will cease; where there are tongues, they will be stilled; where there is knowledge, it will pass away. For we know in part and we prophesy in part, but when completeness comes, what is in part disappears.
‭‭1 Corinthians‬ ‭13:4-10‬

Jake has the Playbook.

Jake Chansley told the world today that after whatever punishment the Judge gave him today was over that he could guarantee that he would not return. He expressed his astonishment and compassion for those he had seen that were return incarcerations. He spoke of ‘institutionalization’ and assured the world that he would not become that no matter.

He did not need to state ‘with almighty God as my witness’ but he did. Jake’s Truth rang through without need for a stated accountability to God.

There was nobody there who doubted him. Especially when he stated his desire to have a wife and children someday. A family.

I have no doubt the family Jake has didn’t yearn for that day when he said it. 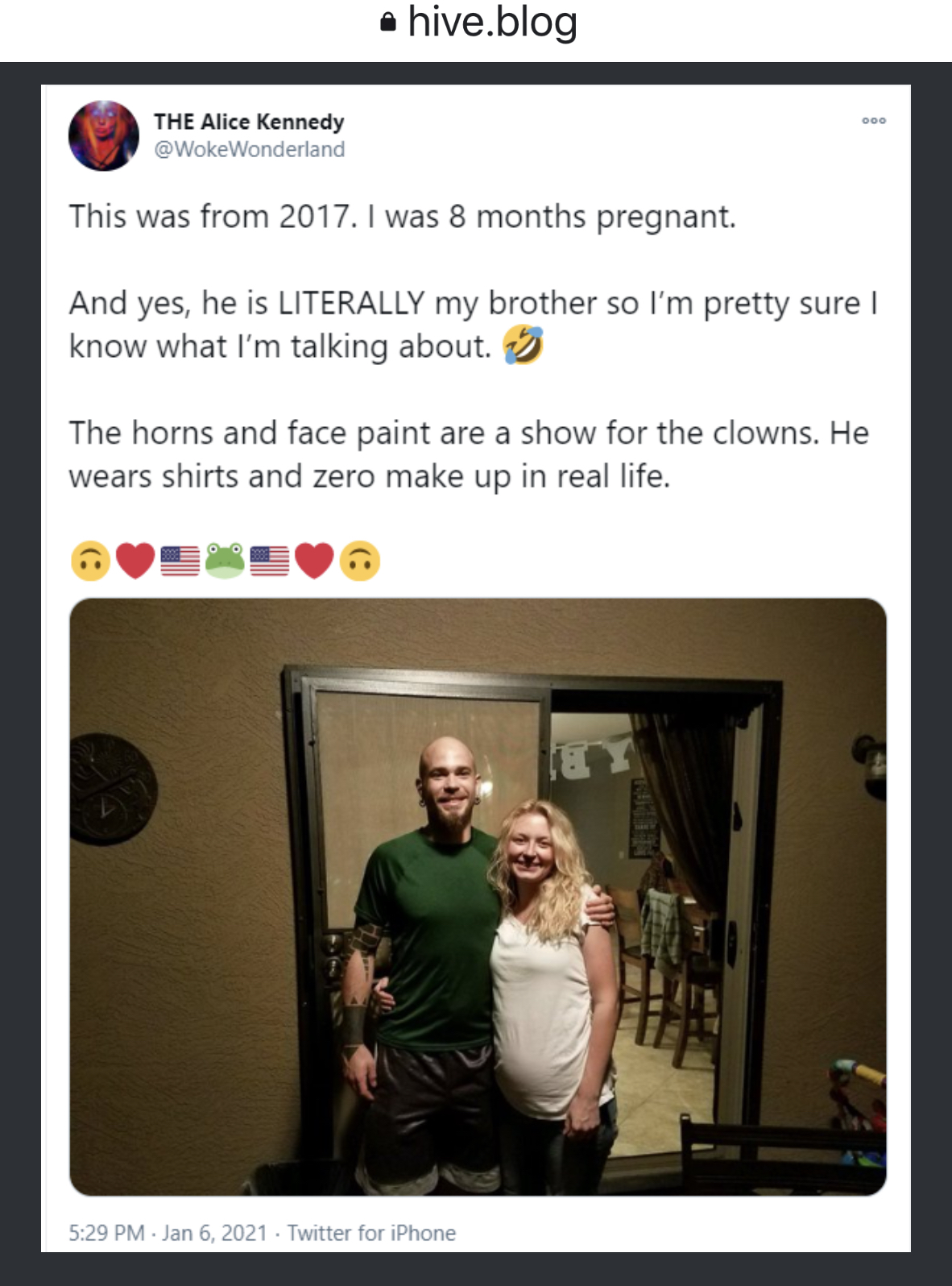 Jake had powerful words about suicide and his newfound perspectives on it today. He said that he has never been tested like he has during his solitary confinement.

When Jake heard the FBI was seeking him he went to them. He brought his shaman gear and went to them without an attorney. He explained this as due to his ‘allegiance to the truth’ even if it brings him trouble.

There was talk both from Albert Watkins and Jake about his service and also his mental health. They both also paid respect to the Judge for his service in the military.

I’m not even going to attempt to sum up Jacob’s statements about his mental health or his attorney’s summation of diagnoses. The system is set up against the Spirit. Beyond that, I am not going to comment on Jake’s mental health. 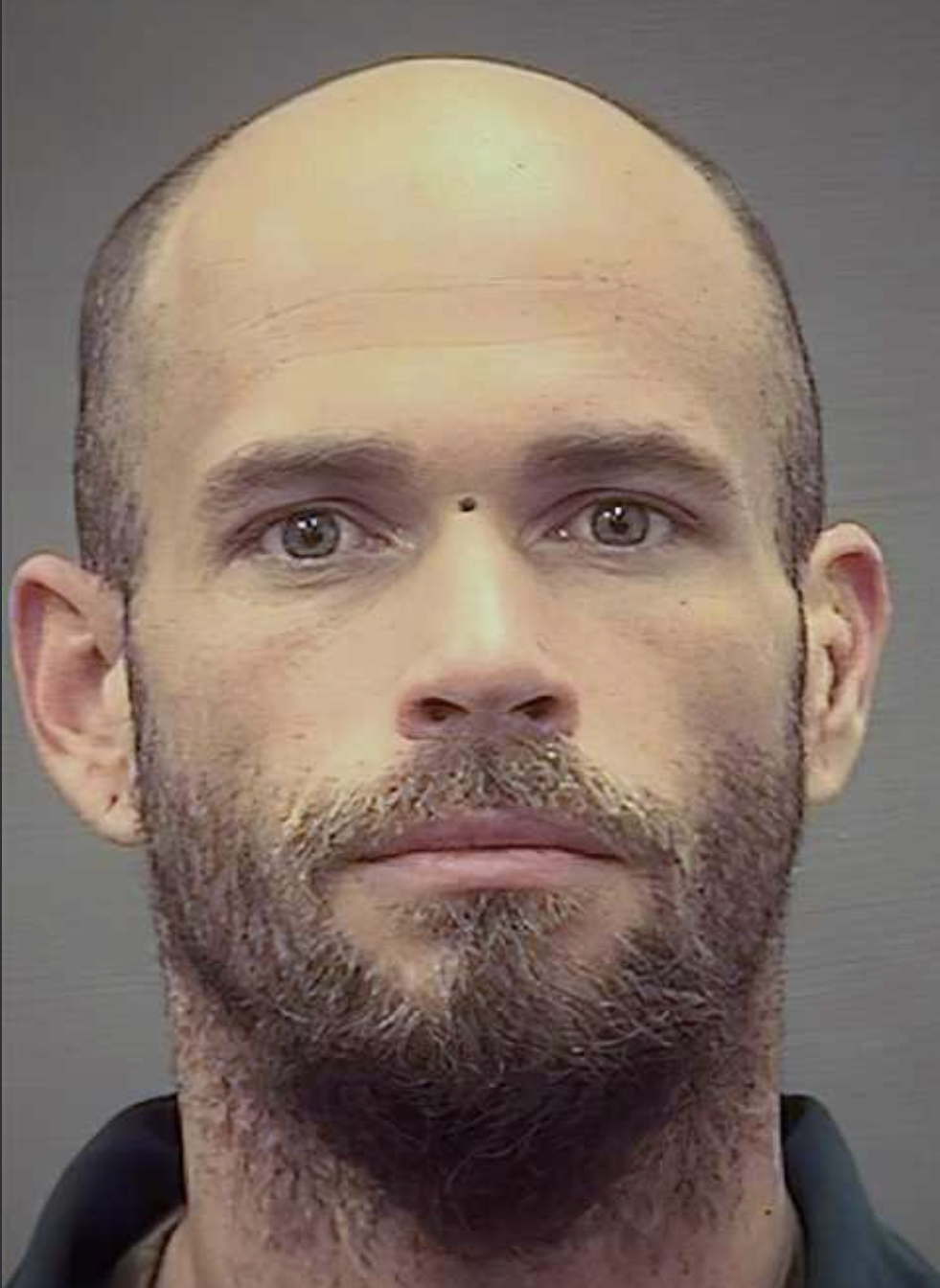 Describing his time in solitary confinement, Jake explained the dynamic of having every comfort in your life turned into discomfort in its absence. He spoke of ‘praying until exhaustion.’ I have no doubt the courage, love, and strength Jake displayed today came from those moments of intense prayer and meditation in his cell.

And pray in the Spirit on all occasions with all kinds of prayers and requests. With this in mind, be alert and always keep on praying for all the Lord’s people. Pray also for me, that whenever I speak, words may be given me so that I will fearlessly make known the mystery of the gospel, for which I am an ambassador in chains. Pray that I may declare it fearlessly, as I should.

Jake also appealed to the Judge to ‘judge a tree by its fruits’ when considering Jake’s long history of service to God, country, and brethren. They have always had to lie about the fruits of Jacob Chansley’s labor.

That’s how effective he is at carrying Truth to others.

It’s why they fear him and why they targeted him.

Blessed are all who fear the Lord, who walk in obedience to him. You will eat the fruit of your labor; blessings and prosperity will be yours. Your wife will be like a fruitful vine within your house; your children will be like olive shoots around your table. Yes, this will be the blessing for the man who fears the Lord.

Today Jacob Chansley was sentenced to about three and a half years in prison after about ten months in solitary confinement.

The holy people will be delivered into his hands for a time, times and half a time.

Do not be afraid of what you are about to suffer. I tell you, the devil will put some of you in prison to test you, and you will suffer persecution for ten days. Be faithful, even to the point of death, and I will give you life as your victor’s crown.

Two thoughts came into my mind after the Judge gave the Prosecution the sentence that they and the media demanded for Jake.

My first thought was the disappointment Jake’s family must have been feeling no matter how realistic and prepared they were for it.

That, and the pride they, and in particular his Mother Martha, must have been feeling as those of us blessed with ears to hear Jake today had our breath taken away.

We see you, Jake.

Whoever has ears, let them hear what the Spirit says to the churches. 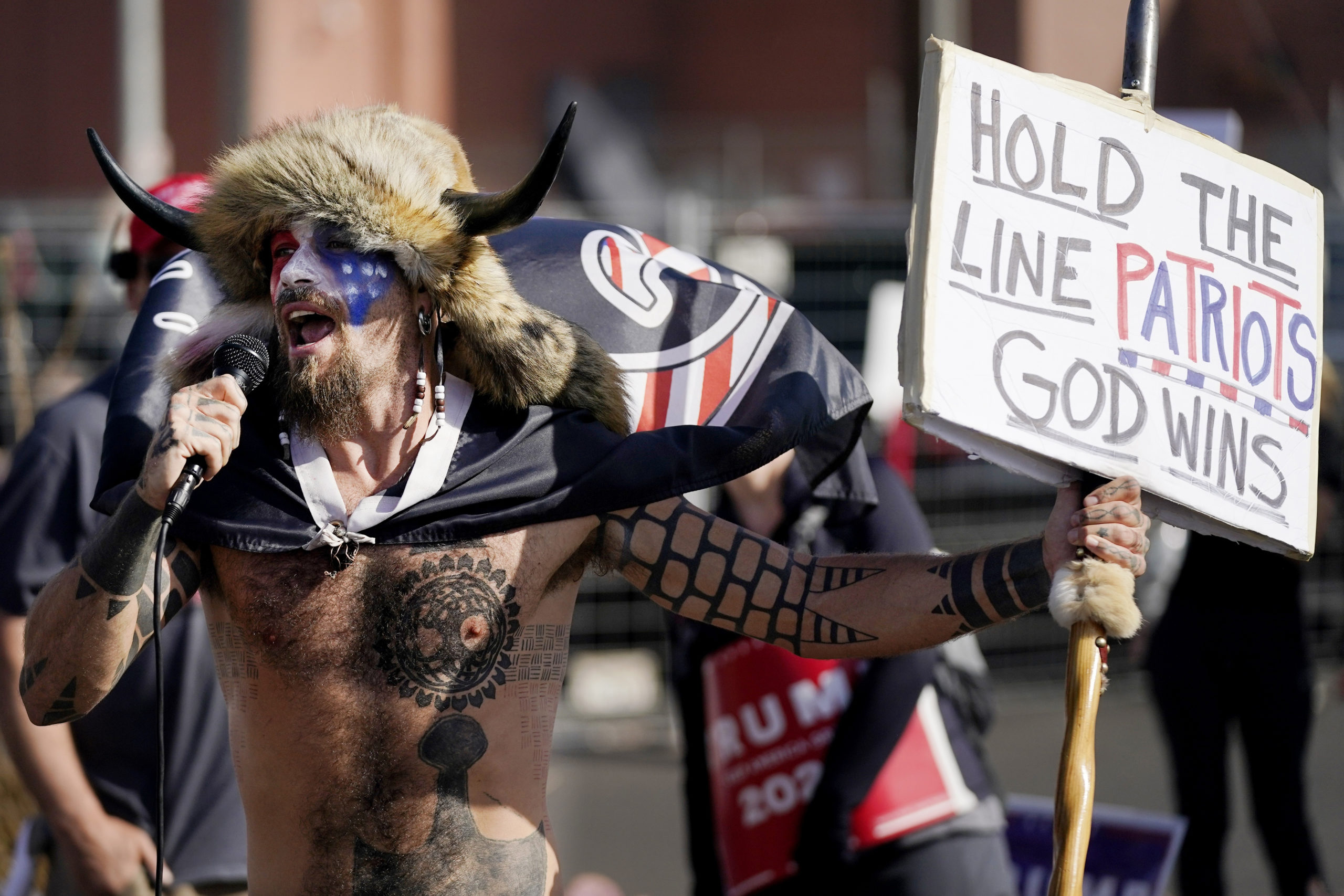 You cannot find a photo of this guy where he doesn’t look fantastic.

Also, anybody else find it curious his mother shares a name with both Superman and Batman’s mothers?

To forgive is divine, but vengeance is mine.

Congratulations @mikemullens! You have completed the following achievement on the Hive blockchain and have been rewarded with new badge(s):