Another Whale just moved to the Hive chain - announcing HiveWhale.com: Pay for a Spray!

Spring is arriving in Northern Hemisphere. It is the time of the year @whalefountain in the harbour of Harlingen, The Netherlands, comes out of winter hibernation.

With the recent centralisation of its former home Steem, the @whalefountain has decided to move to the Hive chain instead and continue making it rain in the Hive instead. Along with its physical digital move from central to decentral the @whalefountain took on some new colors, and features a gallery of recent "hive sprays" now on it's new home @ hivewhale.com The "Hive" Whale is a 18 meter (60ft) life size sperm whale fountain. It is part of the 11fountains project in the province of Friesland in the North of the Netherlands and is deployed semi-permanent in the harbour of Harlingen, the Netherlands.

The beast is fixed in concrete on poles, anchored on the bottom of the harbour. The whale partly submerges with rising tide but continues to spray during the day. At night the whale is sleeping :) The whale has become a tourist attraction on its own. Many people go there for a stroll and wait for a spray :)

With help of a local livestream provider I can show the @whalefountain in near realtime. The livestream has an approximate delay of 20 seconds.

I've hooked up the @whalefountain to the Hive blockchain to demonstrate the power and speed of the decentralised platform. Now anyone can donate some Hive or Hive Based Dollar (minimum donation: 1 coin) and get an almost instant fountain spray burst in return.

Pay for a spray - get a digital photo souvenir!

After your spray you will also get a memo containing the recording of the webcam with your spray, overlaid with your username and blocknumber your transaction occured in.

Minimum donation is 1 HIVE or 1 HBD. Your memo will be displayed on the HiveWhale.com site together with your digital GIF photo souvenir. The HiveWhale operates during CE(S)T daytime. No cure, no pay. If the whale is out of order, unresponsive or sleeping, you will get your donation refunded instantly.

Next to manual transferring the donation amount, you can use HiveSigner, Keychain for Hive or the hive://-protocol via the Hivewhale website to broadcast your donation to the Hive chain.

Tell me more --- How it works exactly?

Basically the @whalefountain is being controlled by a microcomputer which in its turn controls several relays. Inside the belly of the whale is a pressurised canister and a water tank. By controlling the valves via the electronic relays through hydraulic switches a spray occurs.

The Hive blockchain integration is being controlled from a third party server which continuously monitors the '@whalefountain'-account on the Hive-chain and processes new donations in near real time as they appear in blocks.

For this I have made a small rest interface which is pretty powerful and fun, as it can trigger a spray of this giant beast. If there are no sprays ordered via the Hive chain, the whale randomly sprays. Additionally... If one of the fast ferries departing from Harlingen harbour to the nearby islands arrive or depart, and sail through a "hotzone" in the harbour, the fountain gets triggered as well. 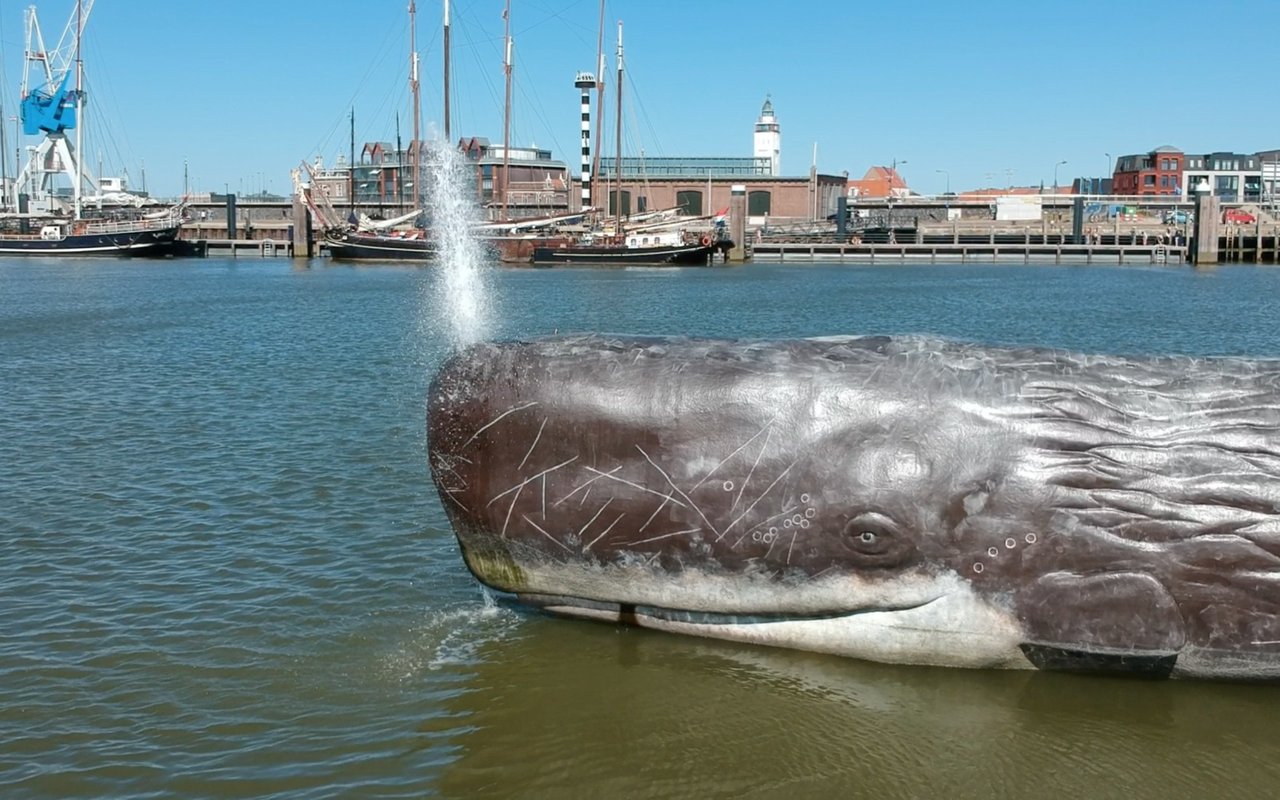 What will you do with the donations?

The donations will go to an ocean preservation cause. For now I try to maximize those donation revenues by collecting low, selling high. I am amidst selling the Steem donations for Hive actually :)

Pay for a spray, make it rain!

Nice to see this whale coming to HIVE too !

That's a good news, things are moving...! Love this project and your others ones !

HiveWallet App is working great 👌thanks you !

What a funny but neat idea idea for raising funds!

I will think about to re-start my spray-bot in the next days. When the first and only hype is gone. Spray on!

Just to think that I was taking further notice of your service. I am wondering what types of fiat that you might receive.

First a kids train and now a huge whale controlled by the Hive blockchain!
You certainly had a wild imagination.
Great work!

I made it spray! So cool!

I had a similar idea; but the crypto contribution lets you aim and fire a mounted paintball gun in a Big Brother style house.
Clearly you're a better person than I am :)

A sperm whale? 20 second delay? Isn't that a little premature?

More like a Sperm Whale with "ED" (erectile dysfunction)

This is officially the coolest use of cryptocurrency ever. Im gonna do it.

How do I become a whale?

Sorry if this is dumb, I'm new.

*By definition, a cryptocurrency whale is a term used to refer to individuals, or entities, that hold large amounts of digital currencies. *

This project is a nod to that :)

So you can become a whale by obtaining quantities of Hive, for example... #notfinancialadvice

Which witnesses would you reccommend?

Which witnesses would you reccommend?

good to see we all move together into Hive!
lovely community, hope we Small PP can grow as well in here!

if you're new ppl or you want to help spread my thoughts about Small PP or "Poor"(people that can't spend money on the platform) and help us grow or blogs and get people to see us, checkout my post blog about "The problem" of Hive/Steem.

If this isn't proof of real-world application of cryptocurrencies I don't know what is :)

Lets get splashing and make a difference in helping life in the seas.

I'm nervous getting sprayed by a Sperm Whale

Brilliant! We need more of these whales. Can we have one in Amsterdam? The canal in front of my home is completely empty of boats, enough room for a gigantic oversized sperm whale with the ability to spray some corona...oops water I mean :)

What if the whale blows in the night (because we are donating around the globe) and the camera can't see it?

The HiveWhale operates during CE(S)T daytime. No cure, no pay. If the whale is out of order, unresponsive or sleeping, you will get your donation refunded instantly.

Additionally on the user interface in the site you will see a different interface for day & night. At night the donation form is hidden. But you can try it, you will get a refund.

Okay, thanks. I must have skipped that sentence while reading😅.

Nice the whale is still alive.
I used it when I was 3 and 4 years old with my father
I'm six now, but I'm doing it again to remember with my own Hives.
Never done it on Hive.
I love it.

I remember this from way back. Totally forgot about it. Would be nice to get a badge too when you send in a donation. 😊

Now you get a digital "gif" recording of your spray as a gift, but a badge would be cool too :) I'll ask @arcange :)

Nice..I am sending 1 hive for that gif tho'. It would make a nice addition at the bottom of the blog posts.

I have asked your suggestion at arcange :) Note the Whale seems to have connectivity issues at the moment...

I appreciate that. Just donated.

Smart! Very smart! And most importantly it inspires all of kind of different ideas !!!

Gonna pump some HIVE into it and laugh uncontrollably for a few hours at the screen.

There goes my productivity today :)

I tried to make it spray, but it was sleeping. I am going to have to try again later.

Hahaha, I wonder though if the sprays are random in real life

how do you make it instant spray? @roelandp

Hey! I was trying to tell about that in my post... As I made the micro-computer (raspberry pi with relays) internals for this project, I touch on that question in this excerpt:

For this I have made a small rest interface which is pretty powerful and fun, as it can trigger a spray of this giant beast. If there are no sprays ordered via the Hive chain, the whale randomly sprays. Additionally... If one of the fast ferries departing from Harlingen harbour to the nearby islands arrive or depart, and sail through a "hotzone" in the harbour, the fountain gets triggered as well.

For the last part it uses a realtime AIS-radio-receiver actually :) Also fun but not Hive related.

I tried to wrap my head around that part, forgive me I'm not familiar with technicals. Can you explain in layman terms how you make it spray? :)

At night the whale doesn't blow. Actually it makes quite a lot of noise when it blows. This can be heard all around the harbour as the water get pushed out of the pipes, together with the pressurised air.

You wish to do good for the platform? I will have a look. Otherwise? Not really fucking interested. Mine from yesterday! Tried to hit it when people were walking by, but I was too slow! A lot of fun, they kids really enjoyed it too!

Uhh, jeah, jes .
Come here, come to the #HIVE, please.
#BUTPLEASE #PLEASE do not abandon the #STEEM.
We got to take it back, it still is #OURSTEEM .
Justin will fade out, one way or the other, and we will get chance to rule on #TWOCHAINZ , because #BOTHCAINZ are #OURCHAINZ .
#DONOTLOOSEONEOFTHEM !
#NONONODONOTDOTHAT !

Thank you! I made it rain in the Netherlands!

That's a great fundraising idea! And for a good cause!

Could someone quickly bring me up to speed on HIVE? I love the initiative based on what I read so far but man... I cannot wrap my head around all the new info :/

Suggestions for revising the souvenir gif to include: 1) memo so it's more tailored (so people will be more interested to make the spray for others); 2) time of spray, better in terms of the time zone designated by the donor.

It would takes some work, so maybe this can be an option for a higher amount of donation / price.

for your reference and great job!

Awesome ! Do you have any plans to create some other whales like this one ? :3

Haha I can remember it on Steem

Cool, I'm glad your rebranded this @roelandp! Happy Easter to you and your family.

nice to meet you. i voted for you.

@roelandp You were in news, when those Steem Tron guys froze accounts, yyours and blocktrades. I just want to let you know, that sucks, that your stake is frozen, I felt sad for it, but I am happy your on developing HIVE chain and are working it to be good and better and all that. Take care!!

This is simply wow...

That is an awesome whale....

I love this idea and send a spray. Looking forward to the gif and will do a nice post for some more promotion.