libertyacademy (60)in #informationwar • 6 months ago I can't believe this news from the beginning of the month slipped my attention.

It turns out that none other than sly slick Bank of England (and former Bank of Canada) globalist bankster Mark Carney has been appointed by his master overlords to accept an almighty "benevolent" ambassadorship post at the UN as 'Special Envoy for Climate Action and Finance'.

The Bank of England said Carney would seek to make the impact of climate change central to financial reporting, risk management and the calculation of returns ahead of a global summit in Glasgow in November 2020.

In other words, they are going to force businesses to include their "climate footprint" in their accounting and financial statements so that they can impose additional/related taxes (which will ultimately end up being paid by the consumers, as these additional costs will simply be mitigated by higher prices for their respective products and services).

Mr Carney said the UN climate change conference "provides a platform to bring the risks from climate change and the opportunities from the transition to a net-zero economy into the heart of financial decision-making".

"To do so, the disclosures of climate risk must become comprehensive, climate risk management must be transformed, and investing for a net-zero world must go mainstream," he added.

See folks? They will make it mainstream. Consequently, expect this sub-agenda to be pushed full-steam ahead starting in 2020.

The new "rules" have likely already been drafted. And they will simply use their government representatives (cross that word, I meant subservient puppets) to introduce them as bills in their respective legislatures, for which the lawmakers will likely be nicely rewarded for their "yes" votes. Rinse & Repeat like with the countless/previous ones.

Mr Carney will be tasked with mobilizing private finance to take climate action and help transition to a net-zero carbon economy for the 26th Conference of the Parties (COP) meeting in Glasgow in November 2020.

And all for a $1 salary/compensation for the pro bono position for the entire year. Ahhh, what a sweet and benevolent climate-loving altruist.

Also note that this position was, until very recently, held by globalist useful-idiot Mike Bloomberg (see also this and this).

What this really entails, folks, is a strong arm means by which these globalists wish to force-feed the United Nations sinister 'Agenda 2030' plan down our throats.

We all know that this climate change farce is nothing but a hoax to fool and further enslave the masses.

Case in point, just look at all the propaganda recently surrounding the Greta Thunberg sham (not a freakin peep about how China or India, the Military-Industrial-Complex, or Big Corporations are the biggest polluters; how convenient Greta!)

You see the Climate Change Hoax is really just a disguise to impose huge taxes on citizens of multiple nations to further enslave them whilst the financial elite further enrich themselves.

So, how does slick Carney come into the mix?

Carney will be the ARCHITECT behind the impending restructuring of the financial plumbing of this so-called 'Net Zero Economy' whereby the big banks and corporations who don't play ball and go along with this fraud to further enslave and loot the masses will be vilified (by their complicit mainstream media) and, more importantly, be excluded from the financial system.

In other words, banks will be essentially coerced into incorporating and imposing the "New Rules" (which will most likely resemble a variation of the 'Carbon Tax' model) when making decisions about how to finance (issue loans) to institutions and businesses, certainly not excluding governments.

Similarly, corporations that won't include these new 'Net Zero' taxes on the back of their customers will also be ostracized and locked-out of the financial system.

And of course, all of this charade will be presented as a benevolent "solution" to the climate change [hoax] "problem" making the lives of citizens around the world much cleaner and healthier.

That is total bullshit of course, and most of us know it. It is merely another means to loot us so that these scum like Carney & Lagarde and their bankster buddies can obtain more power, control, and riches.

It is now become clear as day that these globalists will be pushing this new agenda en masse in 2020, as even the other top globalist [criminally convicted] (see also) bankster Christine Lagarde (outgoing looter-in-Chief of the IMF) has already been calling for her banking buddies in the European Union to get on board with the new program:

the ECB's new chief, Christine Lagarde pushed for climate change to be part of a strategic review of the European Central Bank’s purpose, "spearheading a global drive to make the environment an essential part of monetary policymaking."

As the FT put it, the plan "underlines Ms Lagarde’s declared goal as president to make climate change a “mission-critical” priority for the central bank.

Similar to the Fed, the former convicted criminal and IMF chief who left Argentina near bankruptcy, has promised an overarching review of ECB business ranging from how it defines its inflation objective to whether it includes a fight against climate change among its responsibilities.

None of this prevented Lagarde from thinking big. As in climate change big. Because what was more shocking for a central bank which admits it has failed dismally in hitting its price inflation, was its mission creep into seeking to "tame" climate change as well.

Lagarde said that while inflation is the bank’s primary objective, the fight against climate change should be a central part of policy. She said that the ECB’s economic analysis should include the impact of climate change and that its bank supervision arm should also be asking lenders for transparency disclosures and climate risk assessments.

There you have it in black & white folks - what I had just stated previously above. She and the ECB's 'supervising [strong] arm' will be "asking lenders for transparency disclosures and climate risk assessments."

In other words, they will force lenders (i.e., member banks) to disclose which of their clients are playing the "climate change" ball and which are not; and those who are not will seemingly be reprimanded or forced out.

The seed has been planted and the necessary fertilizer is a footstep away from being employed.

Shortly after I had just joined steemit, I wrote a post entitled Bank of England Governor: “Bitcoin Has Failed" - Yet more bidding from Globalists Banksters... in which I exposed how sly Carney had defending his banking buddies during the 2007-08 Financial Crisis.

So, if you want to see how this slickster operates, I will offer you an extract from my previous post hereunder:

I have to hand it to you sir [Mark Carney], though, as you are as shrewd and cunning as they come. That is likely why they have chosen you to head one of the most sinister corporations in the free world. Let us get a taste of your method of madness Mr. Carney; we needn't look further than a short excerpt of your testimony as head of the FSB (Financial Stability Board) in the following video All the Plenary's Men in which you were protecting your banker buddies at HSBC from being prosecuted after the financial crisis: 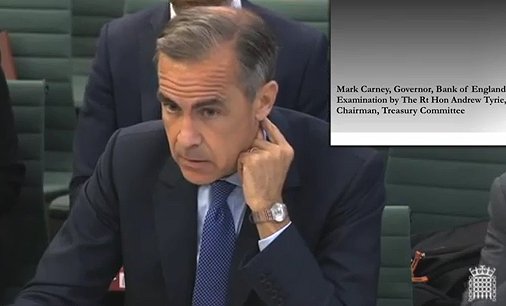 Carney, head of the FSB, testifying under pressure but remaining cool as a cucumber.

You did such a good job for the bankers here by basically ensuring that the DOJ in the US could not prosecute HSBC for its wrongdoings during the financial crisis that it got you the nod for the Governorship of the Bank of England - and being the only foreigner to head it in its 318 year existence. Bravo mon ami! So there's no doubt you got the skills.

You see there's not a more perfect guy for the job on the planet for this UN Agenda 2030 Special Envoy post.

But we should also not underestimate the evilness present within that witch Christine Lagarde.

So folks, let's keep an eagle eye on the actions of these snakes in 2020 (& beyond) and expose them every step of the way.

Together, we can make a difference and inform our fellow humans not to partake in this additional form of looting and sinisterly totalitarian control.

God Bless you all. I wish you all a wonderful Merry Christmas and Happy New Year!

They will tax us to death on a scam.

And have been doing so for centuries. Funny how we let them get away with it too.

Merry Christmas my friend. All the best!