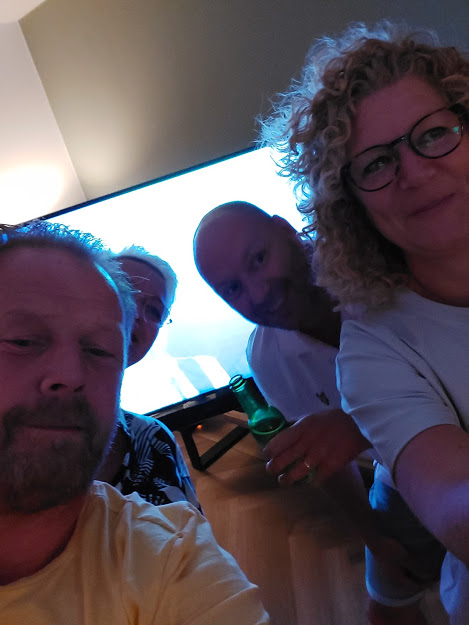 No with a lot of concerts being cancled artists are looking for inventive ways to make some money and to entertain. We visited the livestream concert of Danny Vera. A concert from out of your living room. Did'nt know really what to expect, but it was awesome.
We invited out best friends over to have a drink and enjoy the concert..

First we were a bit scared of the connection, the evening before this concert there was a concert with a stream too and that was really bad reading the reviews...But with this concert we didn;t had any problem at all...

Source A song of the gig

Danny Vera is a musician who started (on national TV) as a band leader for a talkshow. He did took my attention right away, he is a great singer and a awesome guitarist. He finally broke trough with a ballad called "rollercoaster" a great sensitive song which will be a great song for decades..

I'm not sure, I think it's his voice, way of singing and the song it self.. I has international allure... It's just awesome.

Funny, as always, when musicians are becomming populair they are invited more and more to TV shows. Danny has a really american style voice and appearance just a bit like Elvis (I won;t make the compare because that's just not fair, there is one Evlis) but his version of "In the Ghetto " is just awesome..

During the lock down he recorded the home sessions (of which in the ghetto is also a take), The last clip is a song original by Berlin, it's "take my breath away". He gives the song a totally different vibe... I love it..

Have a great evening,

Great stuff! My wife and I have done a couple of these types of concerts too over the past couple of months. It is a great way for artists to still connect with their fans while they are not able to do it the traditional way. Some great song writing has also come out of this social isolation time as well.

It's a great way indeed. I'll bet that indeed some great writing will come out of this. Loads of inspiration....