Who Took the Palestinians Properties and Why They Can't Return to their Homes?

The Israel-Arab struggle is over a century old now and instead of finding ways to resolve it by returning the rights to its owners, we see further push by the aggressors against the people of Palestine to take from them what's not taken yet and make them suffer more than what they suffered so far.

A concerned member of Quora, the Q & A wiki platform asked a question in the context of the Palestinian displacement and their inability to return home.

The question addresses part of the problem so my answer to him there was a wider perspective, I'm copying my answer here in full to protect it from Quora's heavy censorship and to share the information with the readers of this platform:

Q: In 1948, 700000 Palestinians were outrooted of their homes and properties, who took their properties? And why aren't they allowed to return? 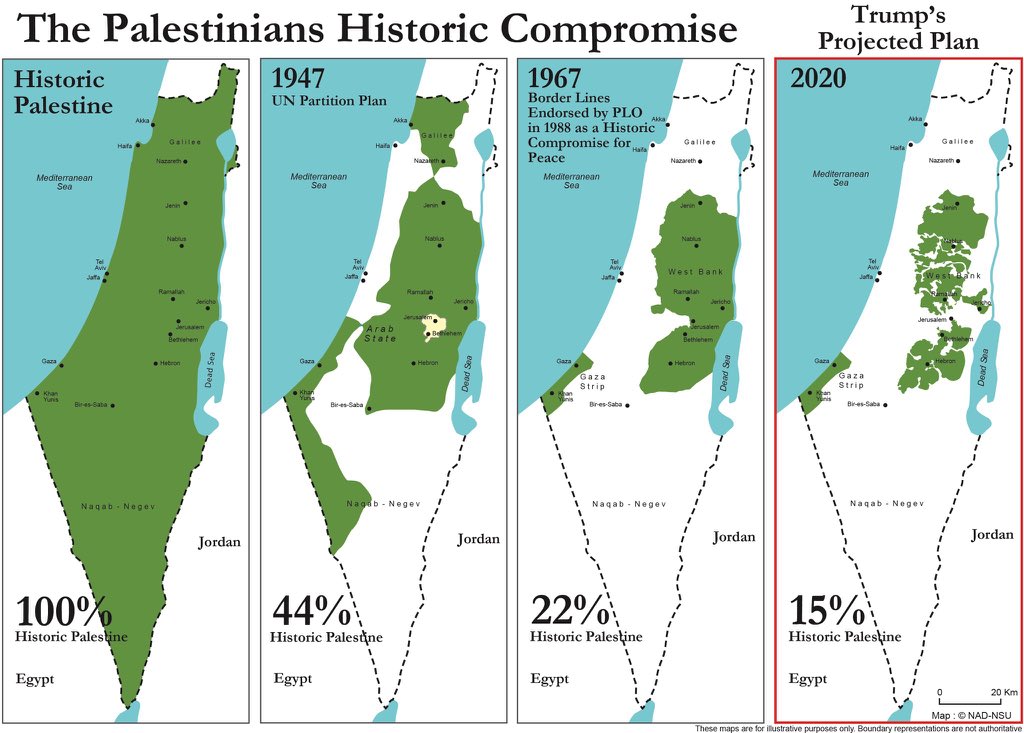 You need to go back before the year 1948 to the year of 1917 when the British minister Balfour issued his infamous declaration now known after his name: The Balfour Declaration where he signed a letter to the Rothschilds in his country to offer land for the European Jews and Jews from other countries in Palestine, that was in exchange for money and maybe other bounties. 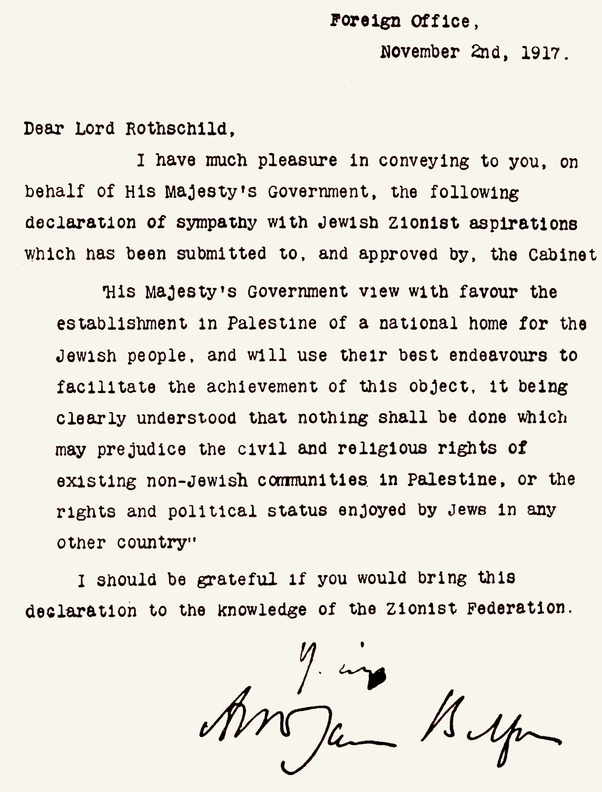 See the word Palestine in the letter? You can’t miss it and this debunks one of the main Zionists claims that there was no Palestine before Israel.

Palestine was not a British land, even if it was in Britain itself, I wonder what the British people would think of one of their politicians giving their land to some religious-based political foundation to create a separate country for themselves on it?! If there’s a British here, maybe they can enlighten us.

Palestine was under the British occupation after the defeat and dissolving of the Ottoman empire. The latter, as well, was an occupation force and didn’t own the land of Palestine, but this is another topic.

Ever since the signing of the above letter, the British occupation forces of Palestine fulfilled their promise to enable the migration of Jews from Europe and elsewhere, by sweet offers and by intimidating against the religious Jews who believe in Torah which prohibits them explicitly from creating their own country.

In that British endeavor, the British occupation forces grew under its protection a host of terrorist groups, some of them were more famous than others because of their unspoken of terror, such as the Lehi, Irgun, Stern, Haganah, see how Wikipedia describe them: 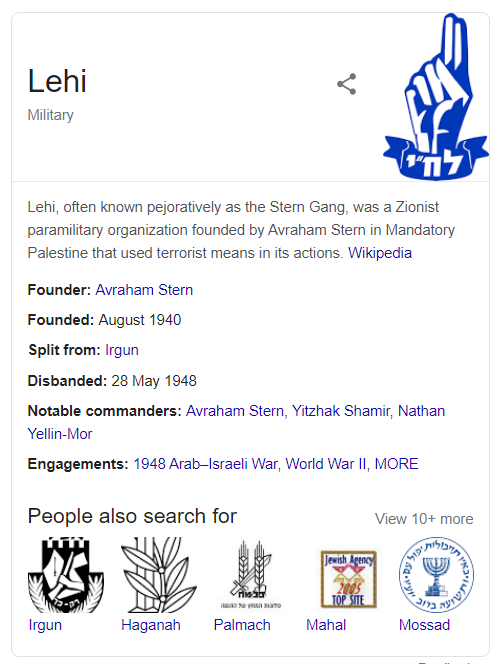 Some of the leaders of these groups ended up as top officials of later-created Israel, for instance: Yitzhak Shamir who became the Prime Minister of Israel, he was a leader of Lehi, I need to provide screenshots from sources so the moderators of Quora won’t censor my replies: 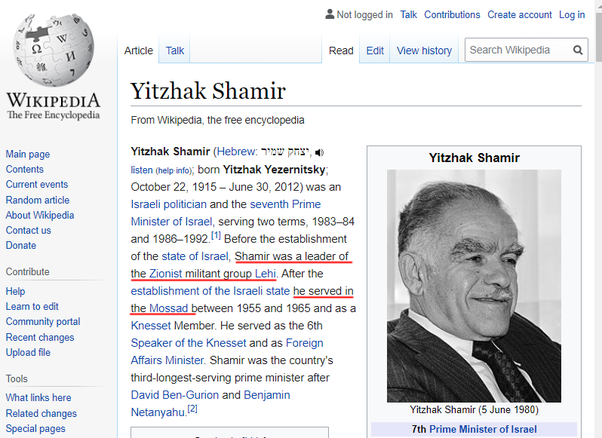 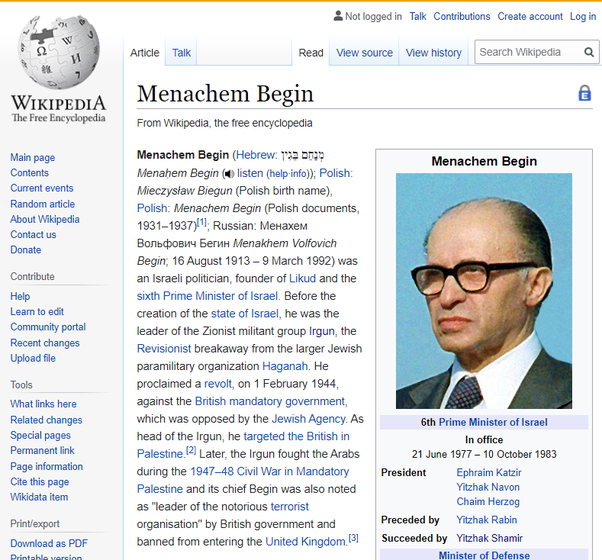 These two prime ministers of Israel, and the most famous of them and maybe the longest to serve in ‘politics’ killed in Deir Yassin alone 107 Palestinian civilians including women and children out of the village’s population of 600 only….!

Shedding light on this history gives you an idea about the livelihood of the Palestinians on their land under the British occupation awaiting to be slaughtered by these European settlers. The Palestinians, mostly, defended their land but were defeated, they were not armed with modern weapons like how the British occupation forces armed these terrorist militias, and they were not prepared nor trained.

Imagine the people in the villages and towns in Syria and Iraq hearing that ISIS is approaching them after they’ve taken over a neighboring village or town.

Having the leaders of terrorist groups take over the land explains why the Palestinians couldn’t return to their homes.

The creation of Israel and its seeds were done by the British occupation forces and later handed over to the USA where the Political Zionist movement gained much more power and wealth and controlled the political domain there, until this very day.

The USA vetoed over 70 resolutions in the United Nations Security Council drafted in favor of the Palestinians. The USA couldn’t veto a number of UNSC resolutions due to the blatant nature of the crimes committed against the Palestinians by Israel and hence we have UNSC Resolutions: 242, read carefully:

“Operative Paragraph One "Affirms that the fulfillment of Charter principles requires the establishment of a just and lasting peace in the Middle East which should include the application of both the following principles:
(i) Withdrawal of Israeli armed forces from territories occupied in the recent conflict;
(ii) Termination of all claims or states of belligerency and respect for and acknowledgment of the sovereignty, territorial integrity and political independence of every State in the area and their right to live in peace within secure and recognized boundaries free from threats or acts of force.”

UNSC Resolution 242 was unanimously adopted by all members of the UNSC including both patrons of Israel: the USA and Britain, unimplemented to date.

A number of similar resolutions fail to be implemented by Israel until this day due to the unlimited protection of Israel by the USA. Even in the final days of Barack Obama as the President of the USA, UNSC Resolution 2334 of December 2016 was adopted with 14–0 votes in favor and the US abstained. The Resolution demands that Israel addresses the illegal Israeli settlements on Palestinian land.

This resolution remains unimplemented as well, instead, Israel under the protection of Donald Trump has accelerated times fold its settlements building on Palestinian stolen land.

The Palestinian people have to wait until the USA is weakened, which is happening rapidly in the past couple of years, in order for them to take back their land the same way it was taken from them and return to their homes. Donald Trump and many in the USA are trying to secure ‘Israel’s superiority in power over all the Arab countries’ at all costs on the US taxpayers, not sure what interests the US citizens and especially the US taxpayers have in this though. 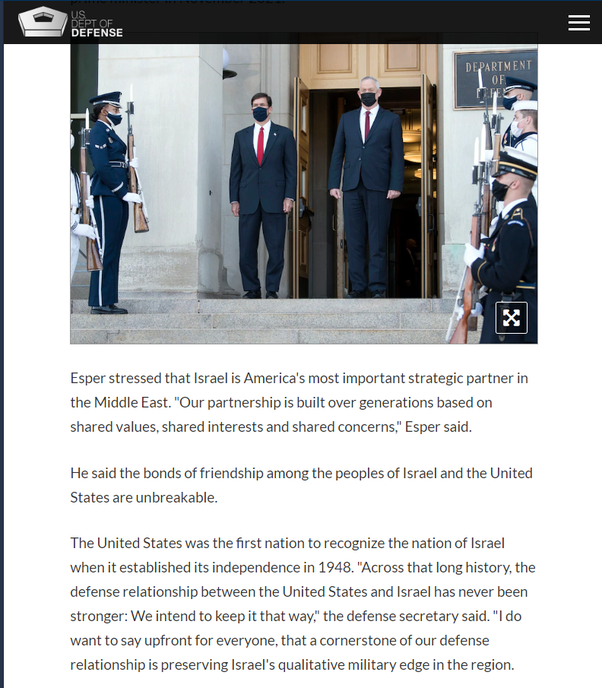 Source of the above screenshot: the Pentagon’s website on September 22, 2020.

However, time is not in favor of the USA nor of Israel starting the year 2000 when Israel was forced to withdraw from most of southern Lebanon it occupied for decades, and later in the 2006 war Israel waged against Lebanon, and it lost again.

You can do your own research and try to base your conclusions on unbiased sources, sources without any affiliation, to get the correct picture. You’ll find many trying to get you lost in too many details mentioning percentages of lands owned by who and on different dates, it’s like taking a document issued by an ISIS office to prove ownership of a property in a village they stormed. My suggestion is instead of wasting your efforts on finding what a criminal was wearing when committing his crime take his written confession especially if he was caught redhanded at the crime scene with the murder weapon in his hand and with notes in his possession showing the planning of his crime.

End of my reply there.

Keep in mind that all the US interventions in our region: the Levant, North Africa, and the Persian Gulf (they call it the Middle East) were to serve Israel, it cost the US in official figures 7 trillion dollars, we believe the figure is much more than that, it cost the US tens of thousands of their own soldiers, it cost the USA degradation in its status as human rights defender and in morals as it committed illegal invasions like in Iraq, bombardment like against Libya, Syria, Lebanon, Yemen, and the creation of terrorist groups under the guise of the 'Arab Spring', just last week the US Under-Secretary of State for Political Affairs, David Hill said in a public hearing that his country used the US taxpayers money to demonize Hezb Allah, the Lebanese resistance movement, in ways of propaganda and financing counter NGOs in Lebanon to that effect...!

Now waiting for Quora moderators to censor my answer as they usually do without fail whenever it comes to hiding the truth about the creation and crimes of Israel.

Your objective comments are always welcome.

Donations are highly appreciated, just click on the Donate button via PayPal or Credit Card: Donate

You can also donate with Hive or HBD or even delegate some much-needed HP here :)