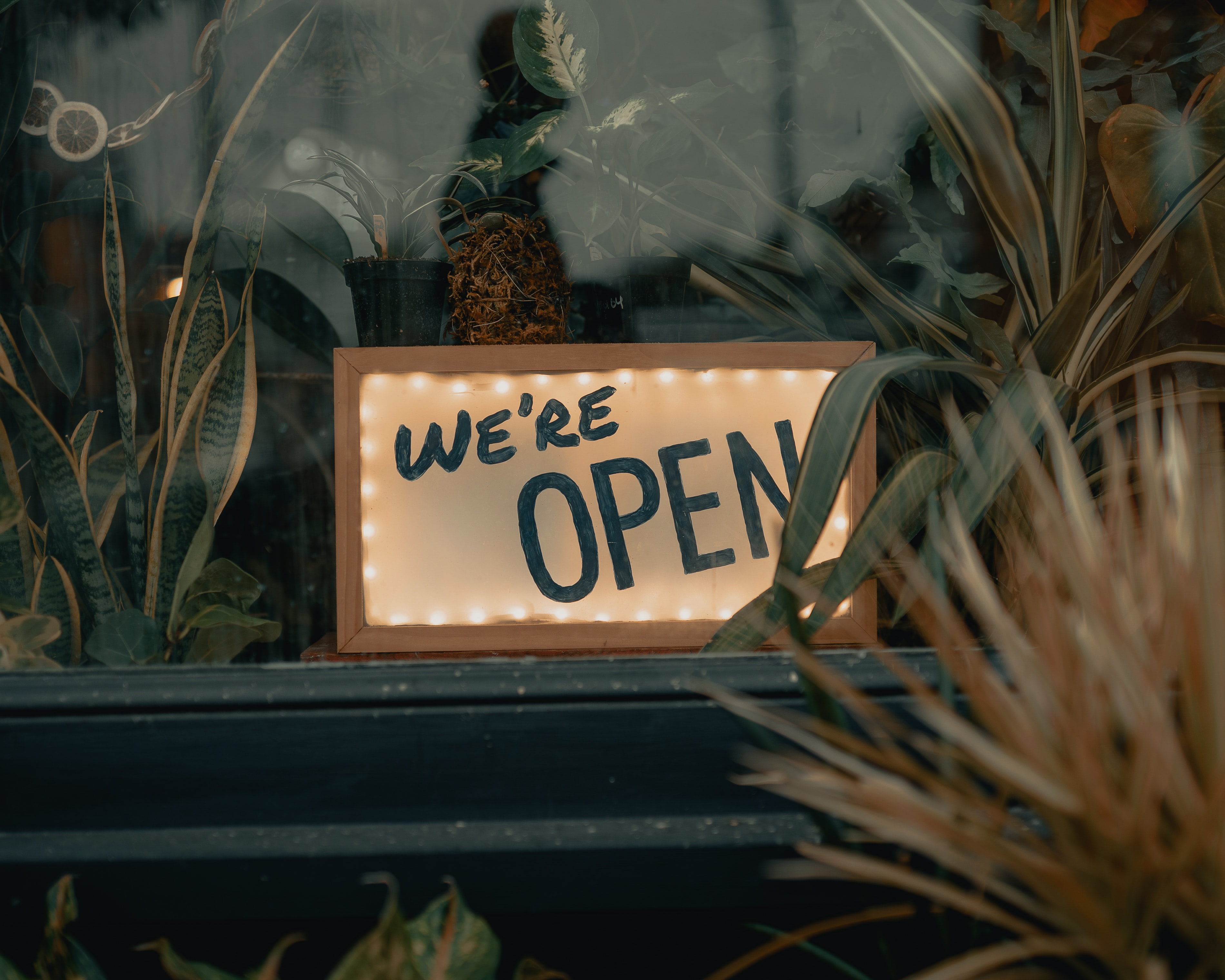 A few days ago I was walking to work, nose in a book (we've all seen that scene in Beauty and the Beast), when a man in a suit stopped me and berated me about some customer rewards program or other that he wanted Main Street to participate in. He was nice, cheerful, professionally dressed, tablet in hand, trying to engage. If I was rude in that situation, I would have seemed like the asshole. There were other people around us, eating brunch, walking their dogs, enjoying the day. And though I politely let him know that I needed to get to work and couldn't stop to chat, I was more than a little miffed for the rest of the day.

That incident itself was hardly a big deal. Rather, it got me thinking about the relentless marketing and advertising that we're subjected to on a daily basis, so much as to put me in a situation where a stranger interrupted me as I was giving clear signals that I was not interested in conversing, and yet I would have been the rude one in that situation if I had reacted the way I wanted to.

Though the concept of advertisement is certainly not new, there is a certain intensity with which advertisers have begun to market to individuals within the past 10-15 years. Marketing reaches not just for the potential consumer but for everyone, casting a wide net aided by demographic targeting and questionably obtained data. We are all consumers, and furthermore, we are all expected to act our part as good consumers.

I am frustrated with the way we cannot escape advertising. Email ads, spam, robo calls, mailbox flyers that only serve to waste paper, sponsored posts that appear far too frequently, Youtuber/Tiktok sponsorships, bus ads, billboards, window signs, endless and never-ending. Those are merely a few examples of what has become a global problem. Every coffee cup is branded, every plastic bag is logoed, every gas station plays ads on the tiny screen next to the pump. Even indirect ads are ads, beauty brands and products trending because of Tiktok or Instagram or "lifestyle influencers", sponsored weather and news popping up unbidden on the dash bar of my Windows laptop. No spare second may go un-marketed, especially when that marketing is subliminal. Sometimes I think it would take ex-cult level deprogramming to remove all of the random buzz from our brains.

And on top of this marketing boom, there is for perhaps the first time, such a thing as being a "good consumer". This exists on two fronts: first, as companies are allowed to chose who can and cannot purchase their products and how they are to be used, and secondly, as companies convince the consumer that it is their job to consume responsibly, effectively removing this burden from the company itself while maintaining a very clean brand image.

Companies are choosing who can and cannot use their products.

Before I delve into the intended iteration, I do want to address the turbulence behind this one. Racism and consumerism are still closely tied in modern American, as they were tied throughout our history; I am not qualified nor am I the right person to address these topics. I'm speaking from personal experience and personal observation alone. To read more about racial capitalism from an expert on the subject, check out author of Franchise: The Golden Arches in Black America Marcia Chatelain's list of recommended reading, including her own work, here.

That said, let's dive in. Much like corporate monopolies on oil, railroads, etc of the past, we're living in the golden age of a monopoly on policy. Not that large corporations haven't always had a say in American politics, but their reach is rapidly growing. Washington is full of politicians being paid off by corporations and bribed by billionaires, but the reach of policy does not stop there. For the first time, companies and corporations are able to restrict consumers in how they use their products, not for safety reasons but purely as a benefit to capitalism, creating a cycle of replacing rather than repairing, throwing out rather than upcycling.

Unlike the era of flour sack dresses (in which flour companies realized women during the Great Depression were turning flour sacks into dresses and responded by printing the sacks with cute patterns), we've moved in a time of being punished for not consuming in exactly the right way. Eln Msk can ban someone from buying a Tesla for criticizing a launch event. Apple intentionally creates phones that cannot be opened up to replace single parts. High-end car companies have voided warranties over videos of their products on social media. Netflix has cracked down on password sharing, even though it's been proven that this isn't making them lose money. The examples are endless.

On the flip side of this, corporations are all the while pretending more and more to be on our side. Branding on social media is a HUGE influencing on corporate performance, and so we see social media managers adapting a likeable, friendly demeanor to answer customer service questions and respond to funny videos. For a while it was common to laugh about "the poor teenager running ____'s social media accounts" whenever a brand made a mistake or slipped up, but in reality, no multi-million dollar company is letting a teenager or college intern run the face of their brand. Corporations will spout "Black Lives Matter" and "All Welcome", as they not-so-secretly donate to organizations that represent the exact opposite of those ideas, never taking the kind of action necessary to back up those claims.

As a former Starbucks barista during the summer BLM protests in Philadelphia, I was told we'd be receiving pins and tshirts in support. We never received them. This was the bare minimum and they couldn't even do that. Instead, we lost pandemic pay that same month, and reopened the inside of the store (which had been drive-through only for the worker's safety) against the barista's wishes. Covid was, at the time, and even still, disproportionately affecting POC and those who had no choice but to continue to work. At the same time, talks of unions were beginning, and the amount of subliminal messaging about how unions would ruin our healthcare, our college benefits, our cash tips, at the time, was downright illegal.

The pandemic and the BLM protests were stark recent examples of how big these corporations talk, and how little they actually care, but also how involved they are in everything we do. In March, I was driving to work every day with a piece of paper signed by my DM on my dashboard that identified me, an underpaid Starbucks barista, as an "emergency worker", and allowed me to move through the city as it was on lockdown. I needed the money, and so did everyone else. Public health was poorly handled within our store, and because so many fast food workers were still forced to work to survive, we weren't able to effectively quarantine as we should have been, all because Starbucks decided we were "essential" and therefore ineligible for unemployment. That was the beginning, and I maintain that it effected everything else that came after. And after blatantly disrespecting our safety and health for months, the corporation had the audacity to attempt to celebrate BLM. I've heard stories like this from all over.

It is a strange dichotomy, to live in a world where a brand can cancel you on Twitter, refuse to let certain questionable celebrities be associated with their brand, mandate exactly how their products should be used, and then turn around and, while donating to the organizations that hate you and backing politicians that want to take your rights, encourage your own social justice without ever backing it up with any definite action. It's almost expected, but it shouldn't be. This goes far beyond at-will employment or the right to refuse service, which were created to protect small businesses and individual employees, and creates a new kind of monopoly.

Companies have convinced the consumer that it is their job to consume responsibly, effectively removing this burden from the company itself while maintaining a very clean brand image.

This one is a bit simpler in concept, but no less important in practice. The global crisis we're currently wading through is largely the fault of corporations who were never held accountable for their actions, but the new sadistic twist is truly blaming the consumer for this crisis. "Clean living" brands are making a spectacular boom, despite a large percentage of them not nearly living up to their purported achievements. "Healthy" consumers are encouraged to "buy organic and GMO free" despite that it would be far better for the environment to simply by local from small farmers, since large farm corporations are one of the contributors to rapid environmental decay. Recycling programs in large cities are virtually useless, and the fishing industry is contributing largely to waste in the ocean. These are the companies paying off the politicians, and though hope is not yet lost, it's a joke after all of that to realize that corporations have for years been encourage us to purchase more expensive products in order to "combat" this phenomenon, when all the while they're going behind our backs.

"Greenwashing" is also one the rise, as companies that were not originally branded as being "eco-friendly" or sustainable" are making vague claims about new steps taken on original products to claim that they are now more sustainable, in a marketing ploy that is not only harmful because it confuses the consumer, but because it takes away from true eco-friendly initiatives. A great article about greenwashing, its impact, and how to spot it can be found here.

Truly, the best way to be sustainable is to buy local and support local businesses in your area. Contrary to the article I read a few weeks ago about "combatting racism by participating in ethical consumption", there is no ethical consumption under capitalism (as my dear friend says). Only the hope that your money is going directly into the pockets of your friends, neighbors, and community, rather than the large corporations that muscle their way into these areas and cause a number of disparities in doing so. Finding POC-owned, queer-owned, woman-owned, family-owned businesses in your area is important, and a great way to begin to change the direction of the corporate-based economy, though it will be a hefty job.

If you've made it all the way through this pretty lengthy article, I'm grateful that you did! I'm not an expert on the topic by any means, just a frustrated consumer with many thoughts, but I think it's helpful to open up discussion on topics like this in a way that is informative and non-antagonistic.

Here are some of my favorite businesses right on my Main Street: