A summary for those that haven't been keeping up with this series:

Based on the contents, at least some of these disks were apparently once owned by someone named Connie who used to run the “Close Encounters” Special Interest Group (SIG) on Delphi in the mid 1980s.

A specific definition of this SIG was found in a document on one of the disks: "This SIG, known as 'Close Encounters', is a forum for the discussion of relationships that develop via computer services like the Source, CompuServe, and Delphi. Our primary emphasis is on the sexual aspects of those relationships."

This service was text based and was accessed via whatever terminal program you used on your computer to dial in to Delphi’s servers. Many of these disks have forum messages, e-mails and chat session logs. All of this is pre-internet stuff and I don’t know if there are any archives in existence today of what was on Delphi in the 1980s. In any case, much of this stuff would have been private at the time and probably wouldn't be in such archives even if they existed. 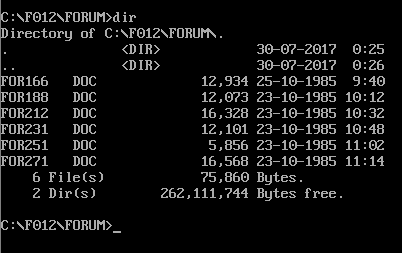 This post includes the contents of FOR231.DOC dated October 23rd, 1985. This is another set of forum messages from the Close Encounters SIG (probably a buffer capture of a reading session). It contains messages from early October 1985. There are a variety of topics here ranging from censorship to sexual positions (and lots of others).

Yay! 🤗
Your content has been boosted with Ecency Points, by @darth-azrael.
Use Ecency daily to boost your growth on platform!

$0.00
Reply
[-]
poshtoken (72) last month
The rewards earned on this comment will go directly to the person sharing the post on Twitter as long as they are registered with @poshtoken. Sign up at https://hiveposh.com.
$0.00
Reply