costanza (73)in #splinterlands • 3 years ago This weeks Share Your Battle Challenge again involves an Untamed card (The Rare Fire Spark Pixies) for me to discover since I didn't have it in my collection and bought if off the market for ~0.10$ In previous weeks I always tried to force the card on the rules seeing how long it would take to get a win but I changed my approach this time just waiting for the right rules (Earthquake) to try and get a win. I also only got a Level 1 Spark Pixies since it's too expensive right now to instantly get a level 5 since nobody is selling those. The Flying ability is so powerful in the ruleset where only flying monsters don't get damage at the end of each round that I didn't worry so much on getting punished by only having a level 1 card. I actually only needed 1 match this week to get the challenge win in. I have a very balanced collection and enough cards to fully play according to the rules. In the case of Earthquake, it's just a matter of fitting all your Flying monsters in the deck which is what I did in the match. The first card I used was the Legendary Level 3 Chain Golem (Thanks @stmp1024 for leasing that one out to me!). It's a really useful card in this situation as it only gets 1 damage at the end of the round for not being a monster with the Fly Ability. The next 4 cards all had fly ability starting with the Giant Roc which has reach and can attack from 2nd position. The Flame Imp & Imp Bowman (both cards I got from daily quests and season Rewards) were in place 3 a& 4 followed by the Spark Pixies which got only 1 life meaning it's vulnerable to sneak. As a protection, I used my 0 mana Golden Furious Chicken in the last place which on top gives +10% DEC earnings. It turned out in an easy clean sheet win against an opponent who basically lacked flying monsters.

I got to know a new card from the Untamed Collection and learned that a level 1 card very much is able to hold up under the right conditions. This post will also be shared on my Publish0x blog to hopefully get some more new players to join in. 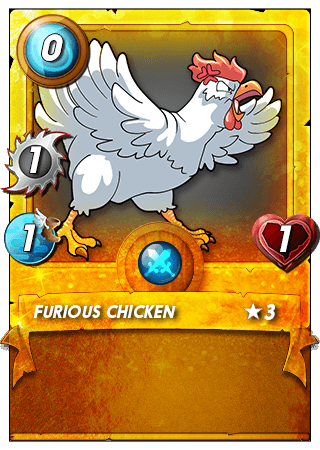 I continue giving everyone that is willing to try out Splinterlands using my Affiliate Link an early game advantage by leasing them out some SP along with an bunch of cards which makes it possible to reach Silver 1 league. (more details on all the cards that will be leased here). As an extra, I will lease a Golden Furious Chicken (3.89$ value) which can be used to get +10% extra dec on each lower mana battle to the first person who ends up getting the Summoners Spellbook.
#steemmonsters #spt #gaming #challenge
3 years ago in #splinterlands by costanza (73)
$6.11
61 votes
Reply 1
Sort:
[-]
carrieallen (66) 3 years ago

Oh! It's so nice to offer stuff to newbies. And a gold chicken for lease?! Excellent!

Your lineups looked pretty good/evenly matched, except your enemy was stuck on the ground. 🤣

Remember to include a link to your battle (I like to watch 'em) next time!