Good morning hivers! This week is accessible to everyone, we get to use the elven cutthroat, a neutral card that everyone has access to from the starter pack, so hurry up and participate in this amazing event! To boost up the damage of my melee monsters and to be able to use the Naga Assassin, I'll use Daria Dragonscale as my summoner. A level 3 nightmare with 2 damage(+1 from daria) and the blast ability, combined with the high speed and high health, this is a powerful first monster. A card with reach and really high speed, in case my tank dies, this card will protect the rest of my team. A high health ranged card with low damage but only 3 mana to summon. I use it on the middle in case both my melee monsters die. I have a level 2 ferryman so it has the cripple ability. The challenge card, a neutral melee monster with sneak, its a little weak on the stats but that high speed and 1+1 damage from the summoner should do nicely. The Naga Assassin card, a ranged monster with really high speed and low mana from the dragon splinter. I love the artwork of this card.

A mixed strategy of melee and ranged monsters with focus on high speed and decent damage.

Mana: 25
Rise of the commons (only common and rare monsters cards) was in place and the mana cap was 25, and also the splinters of water and earth were disabled.

My opponent used the death splinter, negating the effect of my summoner in the process. It only used a single melee monster, with the void ability, which didn't help much, because I didn't use any magic monsters. Also the 1 speed doesn't help him much either.

This is how the battle looked like right before it started, after the summoners applied their respective buffs and de-buffs, exactly as it started.
His undead priest reduced the health of my monsters, then, my team attacked first, afterwards, his triple snipe team attacked my dark ferryman and it fell, and his bone golem missed my nightmare (low speed sucks). 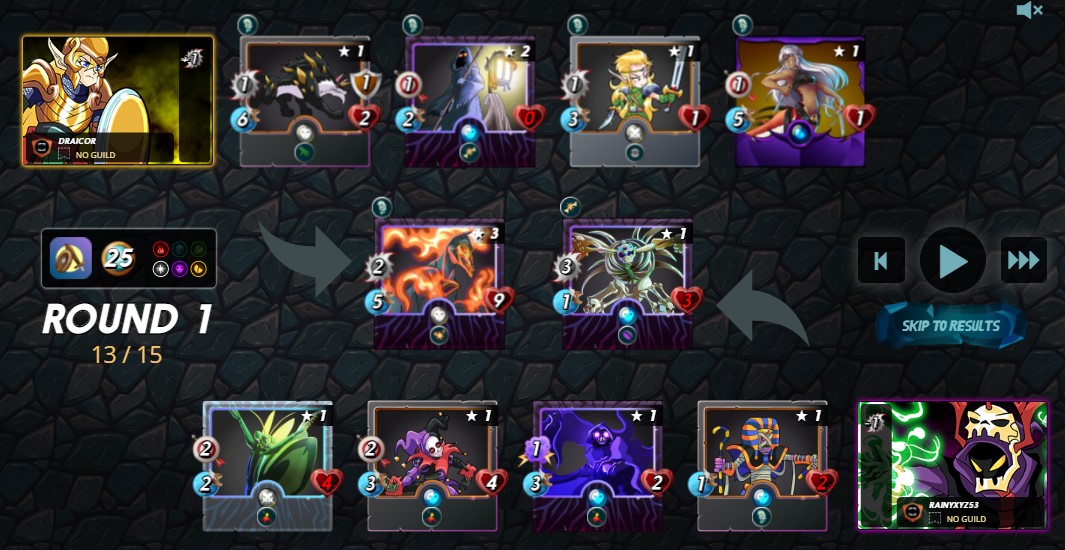 On round 2, my team attacked first again, destroying his bone golem.
His death elemental attacked my naga assassin with magic and it died. 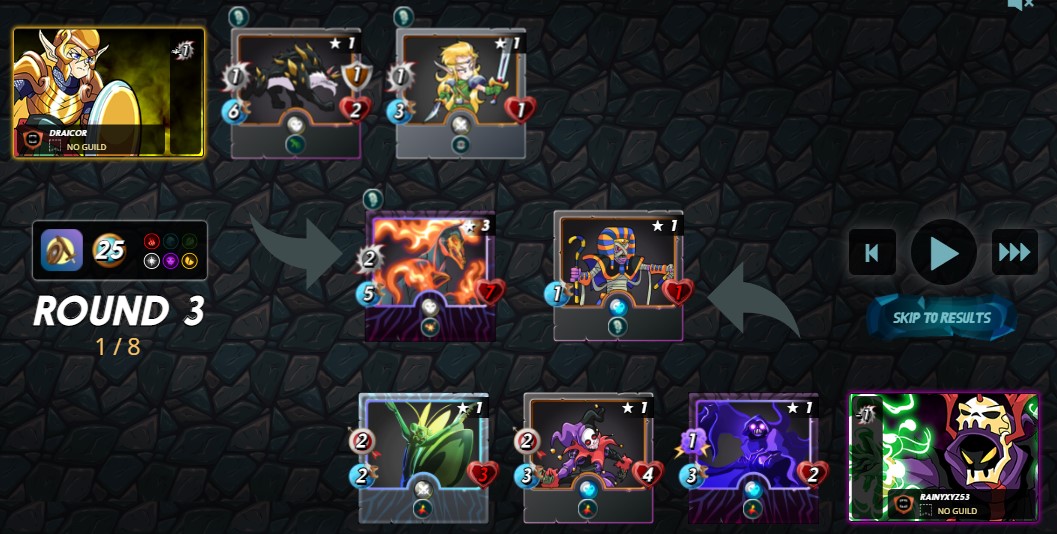 On the fourth round, my monsters attacked first and destroyed the enemy team.

Having high speed cards can be really useful when not going against magic monsters. Not only for the extra defense, but also the initiative advantage. The triple snipe strategy of my opponent was good, but he didn't count on me placing the dark ferryman where I did, so it tanked most of the damage on the first round, allowing the rest of my monsters to deal out some good damage to his team, possibly giving me the victory.