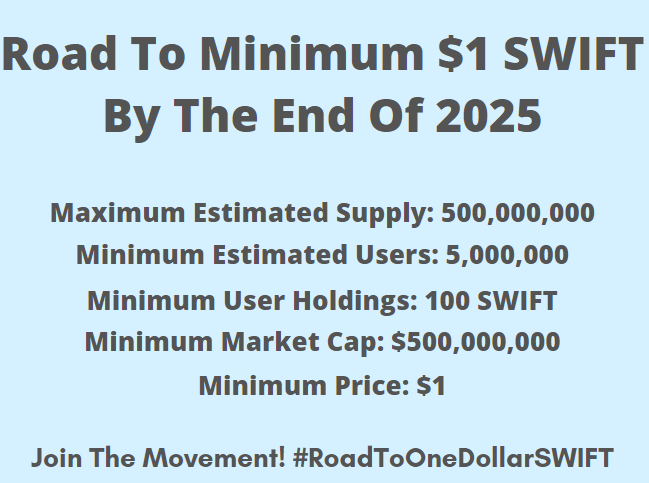 
SwiftCash inflation is complicated. It's not as easy as Bitcoin or Litecoin. It most importantly depends on HODL deposits which can mine up to 80% of the maximum block rewards. Our current estimate for end of 2025 supply is a maximum of 500 million coins! Please keep in mind that the actual number can potentially be less than 500 million and we're being very generous with our estimate just as with everything else!

This road map is being extremely generous with both time and network effect. In other words, we can hit our $1 SWIFT target a lot sooner than the end of 2025 and with a lot less number of users than 5 million! Think about it... The road map suggests you to buy 100 SWIFT, now currently less than $0.2 and do not sell below $1 to join the movement! But what if you buy 1,000 SWIFT, now currently less than $2? This way you will do what is required from 10 people! And we'll only need 500,000 users to reach the $1 SWIFT target!

Make that 10,000 SWIFT, currently less than $20 and we will hit our $1 SWIFT target with only 50,000 users! Do you think 10,000 SWIFT average per user is a lot? Rich List suggests otherwise! Our community is currently very small and we have a lot of whales with 100,000+ SWIFT balances and some with 1,000,000+ SWIFT. Whales will always make up for the fish so hitting the $1 SWIFT target with only 50,000 users and a lot sooner than 2025 is 100% possible. But as stated initially we are not in rush and we're more interested in organic and lasting growth than a quick pump and dump!

Do you plan to join this movement? Let us know below!

My only question is are you'll serious about plans till 2025? It shouldn't happen that people invest and your plans are not much. I mean utility, continuity, etc.

The utility, continuity, etc of a coin doesn't depend on its founder(s). Dogecoin is a prime example of that.

Nah, Steem is a good example of how founders can mess up a community. Anyway, I get your point.

Founders who have received a lot of coins for no good reason yeah but if you look into the history of #SwiftCash, it's kind of similar to $HIVE actually and founders barely took any coins for themselves. More than 99% of the coins were airdropped on the #SmartCash community and the corrupt #SmartCash founders were removed just like $HIVE vs. $STEEM.

This plan relies on the SwiftCash community. A collection of people who decide to join it not the seriousness of the individual writing the plan. It relies on a maximum of 5 million users by 2025, each with a minimum of 100 SWIFT not willing to sell below $1. That's only 0.06% of the world's population over the course of 4 years. 100 SWIFT currently costs less than 20 cents. It's unlikely that someone who buys and holds the minimum would push for adoption esp. if they get the minimum freely via a tip from someone else. But they still play a part in the bigger picture if they hold and refuse to sell below $1.

I follow what you are saying. What I asked is unless there is push from your side to show some utility, followers and adopters may or may not find reasons to use swiftcash. Anyway, you sound sincere, so I will give that to you. 😊

I disagree. A coin that depends on its founders or grows because of its founders often fails. Look at Bitcoin. No one still knows who even the founder(s) is/are. It's all about community. One major value of a cryptocurrency is behind getting listed on major exchanges for example. There's usually two ways of doing that. One is organic growth like Litecoin or Dogecoin and exchanges are forced to list it. The other is through paying these big exchanges ridiculous sums of money. The latter we can't afford so if you're looking for a coin with rich and influential founders, you should look elsewhere!

I like the website and use cases for swiftcash. Got some under market price today on Hive-engine.
@ecosaint