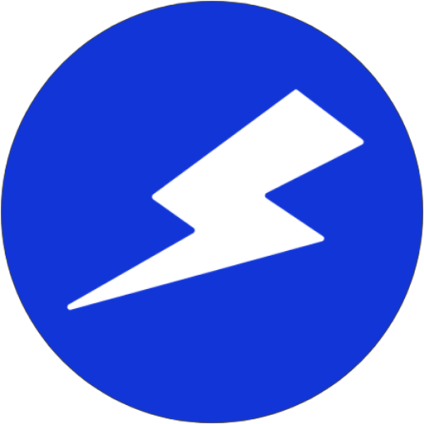 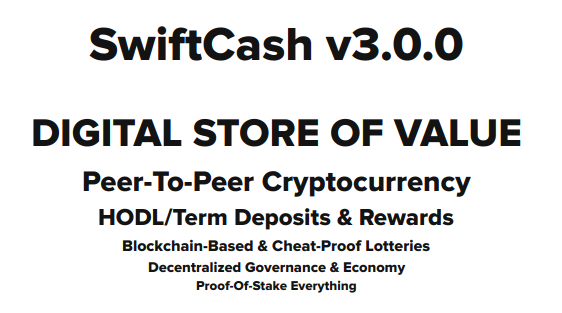 SwiftCash is an open-source, self-funded system of decentralized governance and economy, born out of a desire to create a digital store of value and a peer-to-peer cryptocurrency for daily transactional use along with cheat-proof lotteries that can be played by anyone in the blockchain without any custodian or third-party service getting involved, as well as on-chain HODL/Term deposits. SwiftCash uses the Proof-of-Stake algorithm to reach consensus and allows up to 10% of maximum inflation to be spent on proposals that are embraced by enough stakeholders. Another 10% of maximum inflation goes directly to stakeholders who help secure the network aka Miners and Masternodes, and the rest of maximum inflation which is 80% can go to HODL/Term deposits; coins that are time locked in the blockchain between 1-12 months.

The revolutionary Proof-of-Stake algorithm offers a solution to the problem posed by the exponential increase in energy consumed by Bitcoin, and other Proof-of-Work cryptocurrencies. Proof-of-Work mining is environmentally unsustainable due to the electricity used by high-powered mining hardware and anyone can attack the network and double spend by acquiring 51% of the network’s hash power. SwiftCash utilizes the green protocol, an energy-efficient Proof-of-Stake algorithm, which can be mined on any computer, and will never require specialized mining equipment. The green protocol offers a simple solution to sustainability issues posed by Bitcoin and other Proof-of-Work cryptocurrencies, and provides a faster, and more scalable blockchain that is better suited for daily transactional use.

Mining - The superiority of Proof-of-Stake over Proof-of-Work

A lot of Proof-of-Work cryptocurrencies have come under what is known as 51% attacks, since their invention. These attacks are possible only when the exploiter can acquire more than half of the network’s hash power, often by renting this power from online businesses such as nicehash. Proof-of-Stake mining on the other hand, which is also known as “staking”, depends on the Miner’s balance rather than the Miner’s hash or computational power. Anyone with enough stake in the blockchain can find and register new blocks and be rewarded for doing so, and a 51% attack in Proof-of-Stake blockchains is going to require the attacker to acquire 51% of the network’s active stake that is online and staking.

Therefore, the more stakeholders participate in mining or staking, the more secure the network becomes, as the cost of an attack increases. This is reflected in what is known as the difficulty. With Proof-of-Work mining, the attackers can invest in a strong mining infrastructure once, and use it to attack as many Proof-of-Work blockchains as they want, whereas with Proof-of-Stake mining, also known as “staking” or “minting”, the attackers will have to invest in each blockchain individually, and each time they attack a blockchain, they also attack their own investment! Another thing that makes Proof-of-Stake mining a better solution, is saving money on energy costs and being friendly to the environment. To give an example of how extraordinary the difference is, it might be noteworthy to point out that Bitcoin mining for example, at the time of writing this, consumes more electricity a year than the whole country of Ireland! And last but not least, the revolutionary Proof-of-Stake algorithm gives the inflation to stakeholders rather than third-party miners, who may not be invested in the blockchain.

1:1 airdrop on all addresses of the previous blockchain - SwiftCash v2.x. Addresses with less than 1 SWIFT were excluded from the forkdrop. For initial distribution in the previous versions of SwiftCash, please refer to the previous editions of the whitepaper(s).

SwiftCash uses a decentralized system of governance to reach consensus about the direction and scope of development, support and outreach activities. Higher stake will have higher voting power and so this way, all key decisions will ultimately be made by active stakeholders. In order to be able to vote, stakeholders need to set up and maintain a SwiftNode, also known as a Masternode. SwiftNodes require 50K SWIFT, plus a VPS, as well as a unique IPv4 address.

Our vision of governance is that proposals can even be submitted to hard fork the main chain, and if enough stakeholders want to fork, who can stand in their way?! After all, the blockchain belongs to stakeholders and therefore, it is crucial for stakeholders to continue to be actively involved in key decisions by voting yes, no or abstain to proposals. SwiftCash does not have any hard-coded address that is going to continually get paid, no matter what. Each payment from the community treasuries needs approval from stakeholders through proposals and onchain voting. This includes any payment made to developers, or anyone else involved in the community. Everyone has to go through the same process to get paid anything from the budget. Stakeholders will have the final say at the end of the day, and will hire and fire contractors as pleased.

The cost for submitting a proposal is 10 SWIFT and once a proposal passes, 1 SWIFT will be required to finalize the budget in the blockchain, so that passed proposals can get paid in the next superblock. Superblocks are a few blocks, in which proposals that have passed get paid, and this happens every 4,320 blocks or appx. every month. Proposals need to be submitted and available on chain for at least 10 days before they can be finalized and get paid. Finalization happens 2 days before each superblock; therefore, the deadline for each submission is 1,728 blocks or appx. 12 days before each superblock.

HODL deposits immitate term deposits in the traditional banking systems, however unlike traditional term deposits, HODL deposits are not lent to any bank, government, centralized authority or individual, but are rather locked in the blockchain and made unspendable for a set period of time. This action reduces the available supply in circulation for the set time and should therefore, technically, boost the value of the coins that are available for sale during that time. It also shows long-term faith in the blockchain, which can further increase the value of all coins, both in the long-term and in the short-term.

Block rewards are set to be only 10 SWIFT per block up to block 2,000. This is to make the launch fair and give the community about one week to set up their wallets for staking and/or servers for SwiftNodes. From block 2,000 rewards will start with 2,000 SWIFT per block theoretically, but only 10% of this amount will be mined every block, which will be split between SwiftNodes and PoS miners, with a ratio of 1/5th to 4/5th respectively. The rest of the theoretical block rewards are set aside for HODL rewards and proposals, and will only be mined on demand. Keep in mind that in v3.x, this amount starts lower because of 58,300 added to the formula in order to account for the reset that took place at block 583,000 in the previous chain - v2.x.

Minimum block rewards are set to fall gradually to 5 SWIFT per block and stay there; the gradual curve is very slow and becomes even slower as time goes by. It will take 4 years for block rewards to halve for the first time; second halving will take an additional 8 years, third halving will take an additional 16 years, and so on. This gives us a maximum inflation of appx. 105% in the first year, 43% in the second year, and so forth. Maximum inflation however is most likely not going to occur due to unused treasuries which turn into future reserves.

Furthermore, as an example, Bitcoin has mined over 80% of its maximum supply in less than 12 years, and Litecoin has mined over 70% of its maximum supply in less than 8 years, while if we consistently use the maximum inflation, which is very unlikely by the way, it is going to take us 35 years to reach 20% of our maximum supply! That is great news for future adopters and we do this because we have a long-term goal; what we want is a decentralized cryptocurrency and economy to benefit a lot of people in the world for decades or centuries to come. The following chart depicts the annual inflation of SwiftCash within the first 22 years, with the assumption that 40% of our maximum inflation turns into future reserves. As depicted below, annual inflation in the first year would be about 63%, and would go to below 2% in the 22nd year. 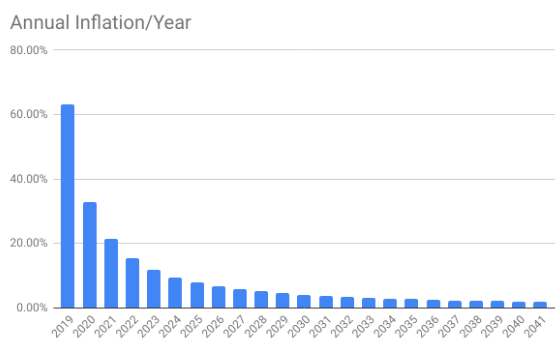 SwiftCash monetary base with the assumption that maximum inflation is continuously achieved will look like below, which is very unlikely as ideally 40% should turn into future reserves. As it can be seen below, it will take us more than 1400 years to reach 5 billion coins, after which there should be more than enough fees to fund and support the blockchain. 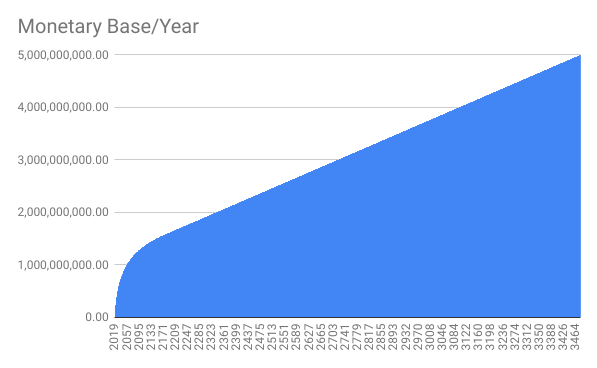 Snapshot of the current chain will be taken at block 583,000 in about 24 hours later.
We'll then be back online in about another 24-48 hours!