fajar.purnama (55)in #technology • 2 months ago

Overseas Implementation between Mongolia and Japan 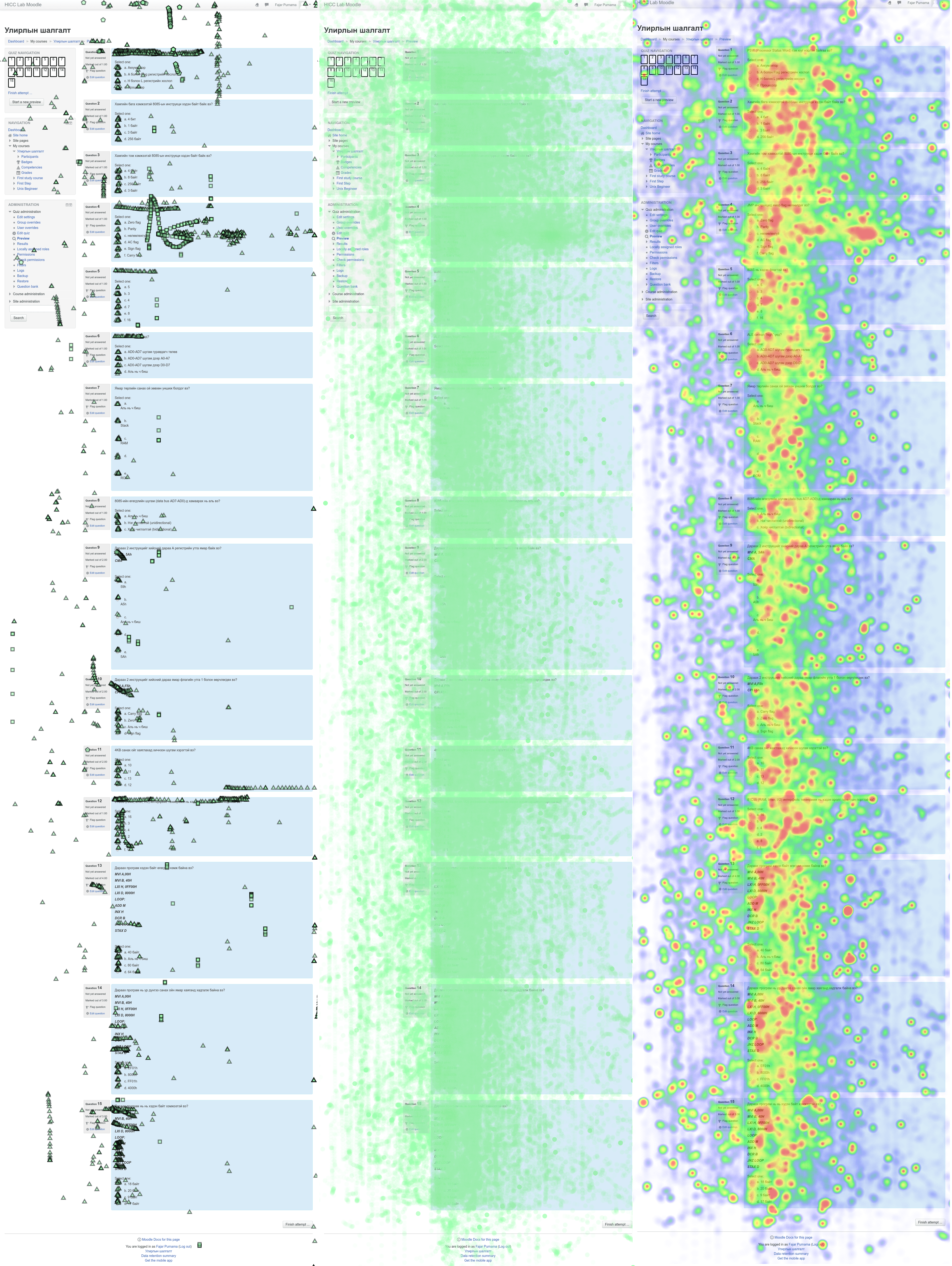 Fig. 13. Screenshot of mouse tracking data of students from National University of Mongolia who attempted a quiz session on a Moodle server at Kumamoto University.

The authors were able to obtain mouse tracking data from 44 students in the School of Engineering and Applied Science, National University of Mongolia, for an online quiz session on the server in the Human Interface Cyber Communication Laboratory, Kumamoto University. Fig. 13 shows a screenshot of the mouse tracking data in form of a table. The table size is approximately 145 MB, containing 393585 rows and 22 columns. Are the rumors that mouse tracking produces a notoriously large amount of data true? The answer to this question is “yes.” A half year Moodle log data with a similar number of students was only approximately 300 kB, while the mouse tracking data represented in Fig. 13 was 145 MB after 3 hours and 30 minutes.

The mouse tracking data contains so much information that a separate report is required to discuss the characteristics of the data and the types of possible analysis. There are many different types of analysis and discussions on mouse tracking data and several examples were reviewed earlier. In this report, sample visualization based on heatmaps and the trails of the mouse tracking data is presented, as shown in Fig. 14. As expected, left clicks occurred more often for selection of the questions. However, there were also left clicks associated with some of the questions and the visualization shows that the left clicks were dragged. This can be interpreted as highlighting the questions by the students. Middle clicks occurred most frequently for question four; however, the reason for this occurrence is not clear. Right clicks were most common on the top of the page, where some students probably decided to explore the available features. As expected, there were numerous trails such that it seemed that there were too much to visualize all at once. The heatmap indicates that most of the students placed the mouse cursor on the questions and choices. There were also few students who placed the mouse cursor outside the questions. Probably, these were individuals who preferred to keep the mouse cursor away from the text while reading. Further analyses are outside the scope of this work. 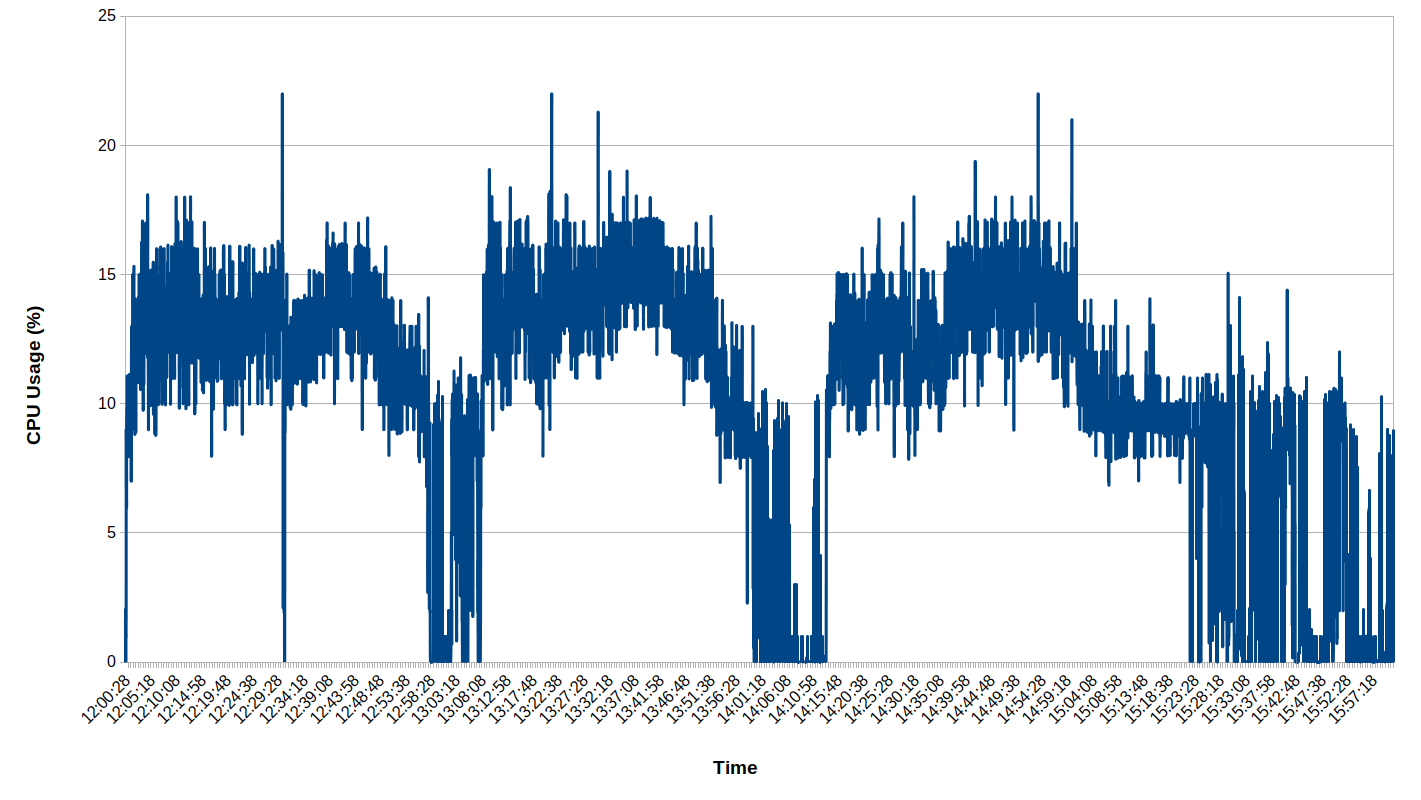 Fig. 15. CPU percentage time series during mouse tracking implementation between National University of Mongolia and Kumamoto University. The horizontal axis represent the time of day and vertical axis is the CPU usage percentage. 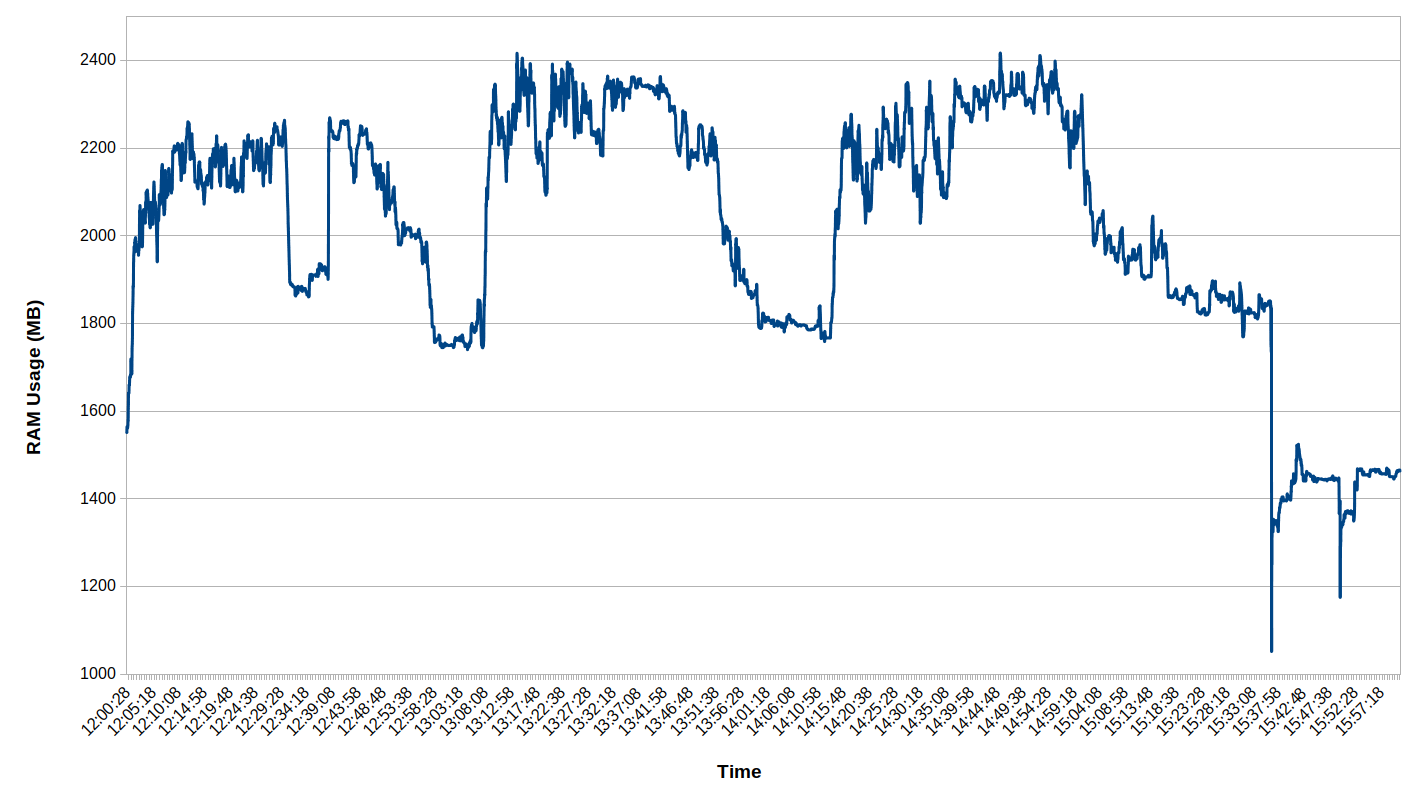 Fig. 16. RAM usage time series during mouse tracking implementation between National University of Mongolia and Kumamoto University. The horizontal axis represents the time of day and vertical axis is the RAM usage in megabytes. 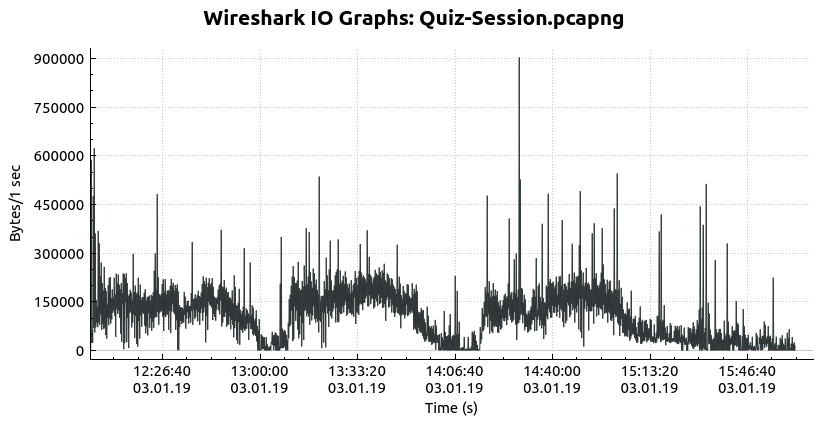 Fig. 17. Data rate during mouse tracking implementation between National University of Mongolia and Kumamoto University. The horizontal axis is the time of day and the vertical axis represents the data rate in bytes per second.

Similar to the local mouse tracking experiment with five users, the resource costs were also measured, allowing us to determine whether large-scale implementation is possible or not. Although 44 students attempted the quiz, the session was divided into two sessions and each session contained only 22 students. The students were informed that the first session would start at 12:00, followed by a break at approximately 14:00. The second session started a few minutes later and finishes at 15:30. As such, the entire process took 3 hours and 30 minutes (12600 seconds). The three Figures Fig. 15, Fig. 16, and Fig. 17 seems relevant to the informed schedule where a decrease in the graph was observed at 14:00 for a few minutes. The number of events generated during this time (12600 s) was 393585. The average number of events per second was 31 (393585 divided by 12600) or 31 Hz. When 31 Hz is plotted in Fig. 9, the result of 115 kB is obtained, which is close to the measured average data rate of 105 kB in Table 2.

Compared to the local mouse tracking experiment with the five users, the resource costs are expected to increase because more users (22) were involved in this implementation, but there were more unexpected findings. The unexpected aspect is that the standard deviation is very high. As such, not only are there many positive spikes, but there are also many negative spikes, which further indicates that the number of events per second generated by the users is very dynamic. It should be noted that there was no limitation on the number of events per second that the students were allowed to generate. Based on Table 1 and Fig. 9, the data rate should increase in excess of 5 MBps for the worst-case scenario where 22 students simultaneously generate 70 events per second. However, this scenario never occurred as shown in Fig. 17, indicating high dynamics, and the very low probability of the worst-case scenario.

In Table 2, not only does the standard deviation increase indicating high dynamics, the distance between the median and maximum also increases, as represented by the taller spikes. The highest spike occurred at 14:28:40 when 228 events were submitted to the server and surprisingly, this was attributed to only two users. This occurrence either contradicts the assumption of the authors that a user can generate up to 70 events per second or there was a delay in transmission, and the submitted events were incorrectly aggregated. When 228 events per second are plotted in Fig. 9, the result 849 kBps is obtained, which is close to the actual measurement in Table 2, where the maximum data rate during this implementation was 837 kBps.

The first conclusion is that the online mouse tracking application was successfully implemented. The overseas quiz that was session monitored with real-time mouse tracking at the National University of Mongolia to Kumamoto University was successfully conducted and at present, mouse tracking is still running on the server. The mouse tracking data containing mouse clicks, mouse movements, and mouse scrolls was obtained, but the analysis of this data will be challenging because of the large size. Additionally, this demonstrates the possibility of tracking on a mobile device using scroll, touch, and zoom events.

Are the rumors concerning high resource cost in mouse tracking true? Can a single swipe generate hundreds of mouse coordinates? Does mouse tracking over a minute generate in excess of a megabyte of data? Based on the result of this investigation, the answer to these questions is “yes.” In that case, is mouse tracking implementable on a large scale? The answer is also “yes.” One server with its specification highlighted in the Experiment and Implementation section was able to handle a classroom of users, and resource monitoring showed that there was much reserve capacity. Other institutions or corporations should have no difficulty in implementing mouse tracking because they typically have big data centers (large number of networks and servers, and distributed resources). For example, a corporation such as Google should not encounter difficulties, although this might be different for technologically challenged entities.

The second conclusion is that mouse tracking is implementable if resource usage is distributed. In this work, the mouse tracking data were transferred in real-time to evenly distributed resource usage, instead of aggregating the data and transmitting them together, which may cause bottlenecks. Unfortunately, the nature of mouse tracking is such that it is difficult to predict. As such, it is challenging to determine resource allocation. The data acquired as part of this work showed the high dynamic characteristic of mouse activities, as reflected in the high standard deviations observed during monitoring of resource usage. When 22 students attempted the quizzes, the resource usage peaks were very high, but only temporarily. This was identified as spikes. Both upper spikes and lower spikes were observed, where upper spikes indicate momentary high-level activity and lower spikes indicate the opposite.

If the amount of available resource is limited, then the resource cost of mouse tracking can be reduced. The mouse tracking application developed in this work can limit the number of events per second or frequency. Additionally, it can exclude unnecessary data. Moreover, even prior to this mouse tracking resource usage investigation, research on the compression of mouse tracking data already existed.

This opens many paths for future work. Although real-time implementation assisted in the distribution of resource usage, the characteristics of the resource usage data showed how mouse tracking can potentially destabilize the system. The use of load balancing techniques can help stabilize the implementation. To achieve the minimum system requirement for mouse tracking, more experiments with different machine specification needs to be conducted. In addition, resource measurement on the client-side needs should be conducted to achieve the minimum system requirement for the client. Even though the developed mouse tracking application was able to limit activity level recording, the settings are still manually inputted. Adaptive settings are required for optimal usage. Although it was useful to conduct overseas implementation, more users and longer implementations are required to further evaluate the viability of real-time online mouse tracking.

The authors are very grateful to Muhammad Bagus Andra, Hamidullah Sokout, Irwansyah, and members of the School of Engineering and Applied Science, National University of Mongolia, for participating in the experiment. The authors would also like to thank Masayoshi Aritsugi, Hendarmawan, Hamidullah Sokout, Alhafiz Akbar Maulana, and Sari Dewi for inspiring this research topic. A special thanks to Muhammad Bagus Andra and Ni Nyoman Sri Indrawati for suggesting some interesting ideas. The authors would also like to thank Fahd Ouassarni for providing suggestions with respect to compressing the mouse tracking application codes. Finally, the authors would like to thank Alvin Fungai for initiating this research and for his assistance in proofreading.

The authors declare that they have no conflict of interest.

Availability of Data and Materials

The datasets generated and/or analyzed during the current study are available in the Mendeley repository titled ’Data for: Implementation of Real-Time Online Mouse Tracking Case Study in a Small Online Quiz’.