Intel Drop #8 – The Middle & Upper Classes Will Be Wiped Out 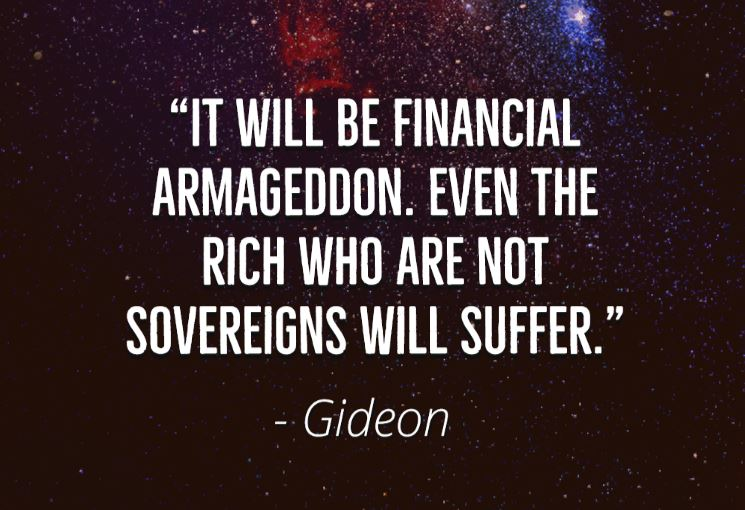 Before we begin, there’s a couple of updates I want to go over. We’ve added a full list of Sovereign gatekeepers, which you can review here. It will be updated over time. I’ve also added a Gettr account here.

At the end of this article, I’m going to talk a little bit about internet security and some tips on that. I hope you read it, it answers a lot of questions I get quite often.

Let’s get into today’s intel drop. We’re going to cover a lot of topics today. The following was curated over conversations today and the past few days.

Bill: I’ve had questions about the Reset, people asking about what happens to their assets. Let’s go more into that. Some people can’t believe they will lose everything.

Gideon: “It’s going to be a very big shock for people in the middle and upper classes. They are going to get liquidated. One day their bank account has $1 Million in it, tomorrow it will have $1,000 USDR. They will panic, they’ll be upset, but they won’t be able to do anything about it.

You have to realize, these people have no skills at all at resistance, protesting, fighting back, standing up for themselves. It will be the shock of their lives and they’ll be caught flat-footed, and eventually just submit. Suicides and familial problems will be the main fallout. A lot of fighting in the home, but it won’t extend much beyond that.”

Bill: What about people in upper management, or CEOs, or rich lawyers. What happens to them?

Gideon: “They will be expected to continue doing their jobs, and if they don’t, there will be severe consequences. Their social scores will be lowered, they will be moved to Restricted or Quarantined, their USDR will be drained. It’s that simple. They will have to comply, and eventually, they will realize if they behave, they will get some rewards.”

BIll: Can you explain that more? You’ve mentioned they do have reward system for Common class.

Gideon: “They do. Not really a monetary rewards system, because bank accounts are capped and so are assets. That isn’t changeable. We see in the software, it’s not changeable. What’s in place of that are vouchers and coupons for good behaviour.”

Bill: Will people scoff at those? Will they not be happy with them?

Gideon: “What choice do they have? A voucher for a free coffee is certainly better than no voucher. Remember, draped in all this, before and after the Reset, will be justifications based on climate change. And if you disagree with that, then you must not only be a climate change denier, you are hurting the planet and others. They will frame much of it this way, and the rest will be all about pitting you against your neighbour, which is common in Communist countries. Snitching is a profession of its own.”

Bill: What about restrictions on food? I posted something about that on Twitter, restricting food physically in stores so you can’t even get to the food without getting scanned first.

Gideon: “It’s absolutely true. There will be turnstiles just to get into a grocery store. You will be scanned. Your social score checked. Your vaccination status checked. You won’t eat if you’re not complying.”

Bill: It sounds so crazy, but I’ve seen they have implemented this and they do have the technology.

Gideon: “Wal-Mart has it all ready to go. All of this is ready, Bill. They’re just waiting.”

Bill: It’s really all just some dialectic. They’re all in this together.

Gideon: “Of course they are. Every country is on board, more or less. But they don’t want people thinking this is all coordinated. They want people believing in their national identities, and believing their leaders still work for them, and that on the political stage there are all these competing forces.”

Gideon: “Yes, because they have a World War III scenario on standby. It wouldn’t make sense unless they had the narrative to back that up.”

Bill: So, if we’re sitting around thinking Russia and China are trying to take over the West, we’re just playing into their psy op?

Gideon: “We are. Russia and China are the enemy of the people. So are the United States and the United Kingdom. So are most countries. They all are subservient to the cabal, and just play a role on the grand stage. All of the leaders were replaced over the past thirty or so years with those who will be supportive of this Reset and New World Order.”

Bill: I had one guy email me and he lost his mind because he said he couldn’t find anything on Google about us. He seemed to be expecting to find news articles about us, like the New York Times talking about CSRQ. He couldn’t find it, so he got mad and called me names.

Gideon: “Then he lacks basic reading comprehension skills. You will see a lot of people lack the basic capacity to process information. They operate more at the level of a 12 or 13 year-old child now, even if they are an adult. It’s a combination of psy ops, mind-control, EMF pollution, poor diet, and so on. They will be fodder for the cabal, and they will be easy to vaccinate if they’re not already.”

Bill: I’m just struck by this everyday, people who can’t comprehend really basic things. Then they jump to wild conclusions, or get scared. I had one guy just losing his mind, saying, “They can’t do this! This isn’t possible! It won’t work!”

Gideon: “That’s denial. Why would this not work? Are they not aware that Communist societies exist and have existed for decades? Do they have no education of history? Do they have no awareness of the cabal or power structure that controls this world?”

Bill: I think they’re in this American mind-control trap that says, “America’s great and that can’t happen here.”

Gideon: “The American government is one of the most corrupt, authoritarian and oppressive in the world. I would hardly say they are free, and yes, it can happen there, it already is happening there right now.”

Bill: They have guns, they think the guns will save them.

Gideon: “It’s good they have guns, but they should have used them twenty years ago after 9/11, and probably further back than that. All they had to do is march into D.C. and take it over. A few million patriots, with trucks and tractors, and it could have been done. The city itself should be burned to the ground and everyone in the Federal government should be arrested and most executed.”

Bill: They’re too late then.

Gideon: “Way too late. The cabal is not worried about the United States. The cabal’s gatekeepers on both the Right and Left have everyone corralled and pacified and distracted, believing all kinds of nonsense.”

Bill: You were saying the other day that you think a lot of Q Anon followers will end up vaccinated.

Gideon: “Yes. By virtue of the fact they’re in a cult, they follow the cabal’s cult leaders, and they’re mentally unprepared for reality. I don’t see them posing much of a threat. One way or another, I see them ending up vaccinated, after the Reset.”

Bill: Where do we stand right now. What’s your update on what we are doing?

Gideon: “We are plateauing. The people seeing the information is dropping off everyday. Some people in the alternative media published this information, some of them deserve a lot of credit, but now that source is drying up. There may not be many left who will cover it. Most are Sovereigns.”

Bill: What percentage right now do you give the cabal in succeeding in this plan? To collapse everything then Reset?

Gideon: “It’s at around 85% chance of success for the cabal. Our time is running out by the second. Once this happens, it is going to be much harder to defeat them on the other side of this. We will try. You and me, and our group, we will try as Sovereigns to sabotage them, but we don’t want it to come to that.”

Bill: There has to be some good news?

Gideon: “I’m seeing a small but solid awakening to the Reset online, and to the vaccine injuries. It’s not enough right now, not remotely enough, but the response is positive. It’s not clouded yet with gate keeping. The messaging is clear, it’s truthful.

But be forewarned, the cabal will enter that resistance and put their disinfo agents on overtime. They will spin false narratives. I expect that’s going to happen in the next few weeks, because right now the response isn’t being controlled. They will want to contain this, Bill. Contain it. Keep it circulating in the same group of people who are awake and make sure it doesn’t get out to the wider masses.”

Here’s some tips and misconceptions I want to go over real quick. Half this I learned from Gideon, so I’m passing it along:

Using the steps above won’t change your current data file or change your class status! You will be Common, Restricted or Quarantined. It’s still good to do these things, because we never know what will happen. We hope to stop CSRQ. Let’s always use good practices with our online behaviour and protect ourselves, anyway. We don’t want to make anything easy for the cabal.

Helping us on social media is really important. Liking, sharing, commenting, it makes a huge difference. Try to do something each day to help us out. All of our links are on the web portal below.

As always, please share this article and be sure to visit our web portal to sign up for our email newsletter and follow our social media accounts.

Congratulations @memen! You have completed the following achievement on the Hive blockchain and have been rewarded with new badge(s):