Repost: My Day as an Election Judge in the 2008 Election 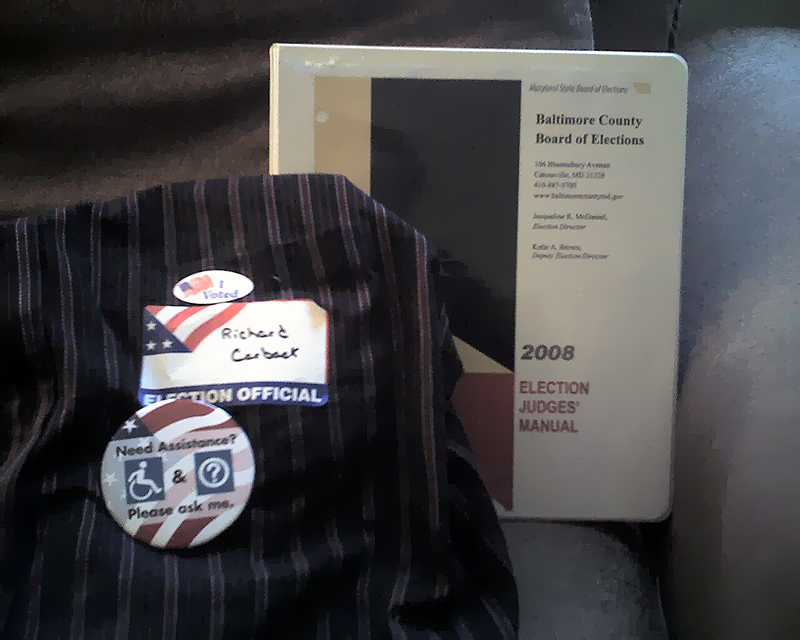 2008 was a historic US election year, with turnout at historic highs. I think this year may be another such year, so I decided to repost my experience as an election judge so people can glimpse what it was like for an election judge at that time. Unfortunately, due to personal issues I won't be able to be a judge this year, but I am hoping to get back into elections soon.

I had meant to post this yesterday, but I woke up not feeling well and spent the day in bed. I see that Ben Adida and Avi Rubin have already posted their experiences. Aleks Essex also posted his experiences a few weeks ago when he was a worker for the most recent Canadian election.

The chief judges invited all the site judges to meet up at the fire house the night before at 6:30 to make room for everything. We also plugged in the DREs, which you can conveniently do without opening the units. I didn't ask, but the average age was likely in the 40s. We had 1 high school student who was 17, and my guess is that there was an even split between the 20-40 crowd and the 40+ crowd. There were 3 republicans, and the rest were democrats except for the unaffiliated high school student.

After we finished, the Chief Judges explained what would happen in the morning, and asked if there were any questions. The biggest concerns were potential turnout and if we'd get the extra machines we had up in time with the same number of judges as before. They also expressed concern about a technician showing up and staying for the whole day.

I woke up @ 4:30 and arrived a little after 5:30. Myself and another judge set up each DRE while 1-3 judges watched and recorded information. I recall it being a fairly simple process and working pretty well with the exception that the chief judge sometimes had trouble opening the printer compartment. I was a little concerned that the DREs, despite being plugged in all night, all registered only a 60-80% charge.

Our longest line happened when we first opened the polls, which went all the way out the door and around the corner. People at the end of that line were still cheery, as they only ended up waiting approximately 15-20 minutes. We had a steady stream of people until about 10:30, which picked right up again at 11:00, and stayed mostly steady for the rest of the day with occasional 5-10 minute breaks in flow. Check-in time only took about a minute if you were listed in the poll book. I'm not totally sure, but I believe voting varied from 1-10 minutes, although some voters probably took longer.

I served as a voting unit judge for the whole day, which is all standing (my legs were killing me that night)! This involved taking a voter authority paper, initialing it, writing the unit number you gave the voter, getting the voter started on the machine, explaining how it worked (if necessary), and dropping the the paper into an envelope on the side. The papers are tallied every hour, and the chief judges make rounds to verify the counts match the machine totals so far.

A majority of our 8 machines were in use for almost the whole day, and at the beginning and towards the end, we had periods of about an hour and a half where all of them were constantly in use. No one used the headset or keypad, although we did have a few voters who requested assistance or needed a chair. Many voters used the large text and apparently the button was not big enough as this was our most asked question.

We had no major equipment failures during the voting day. The biggest equipment problem was that the smart cards were sometimes difficult for voters to get into the machine, which we solved by starting it in the machine for the voter, and letting him or her push it in until it snapped.

The other problems all involved the electronic poll books, which sported a confusing user interface to navigate. The judges managed and came up with troubleshooting steps. I was later told that a couple voters would not come up on the local polling site search, but when you went to the statewide search, they did and were registered at our local polling site.

I don't know a specific number, but at least 15 people or so came in and had trouble during the check-in process. About half voted provisionally, and the rest either went to the correct polling place or admitted they knew they were not registered. I believe there might have been one person who walked out on us, which is really unfortunate. There needs to be a better way to deal with registration problems.

Although it mostly worked well for the vast majority of voters, a few voters were tripped up by the interface. At least one person asked me a question after having pressed cast ballot. Another couple asked why the judges question, a vote for 2 race, was red (because they had not voted for two candidates).

Ballot question wording was also an issue, and understandably so due to the legal language. A number of people called us over to ask me the meaning of various passages, and a few even to ask which answer was "yes", and which was "no." It would be best if the language were simple and clear.

Early in the day 1 voter complained about the privacy of the machines. We flipped down the screen for him so it faced the ceiling and told him we could angle the machine however he wanted. It turned out to be a more general problem because there was no curtain. That explains what happened later, when we got a call that someone complained that people were being watched as they voted, and someone from the central office came by to check in on us.

Lots of voters complained about the security of the machines. Some were curious why others did not think they were secure. I just tried to stay away from that discussion as much as possible.

At the end of the day, we had 1045 DRE voters, and 8 provisional ballot voters. The chief judges told us that the last major election had 300 out of about 1500-1600 registered voters for our precinct overall (about 200 voters per machine), which is a significant improvement in turnout over previous years.

We finished around 9:30. Tearing down was much worse than getting started, as you had to navigate through a bunch of menus that really didn't need to be there. An "end election" button that printed the necessary information would have sped things up significantly. The accumulator machine did not recognize the modem, so results were phoned in and then the memory cards were driven back by both the chief judges.

Poll-tape Results for our poll site (the English Consul Volunteer Fire Department, 13-8), were recorded by me as follows:

I hope I didn't make a mistake. You may want to look at the ballot: 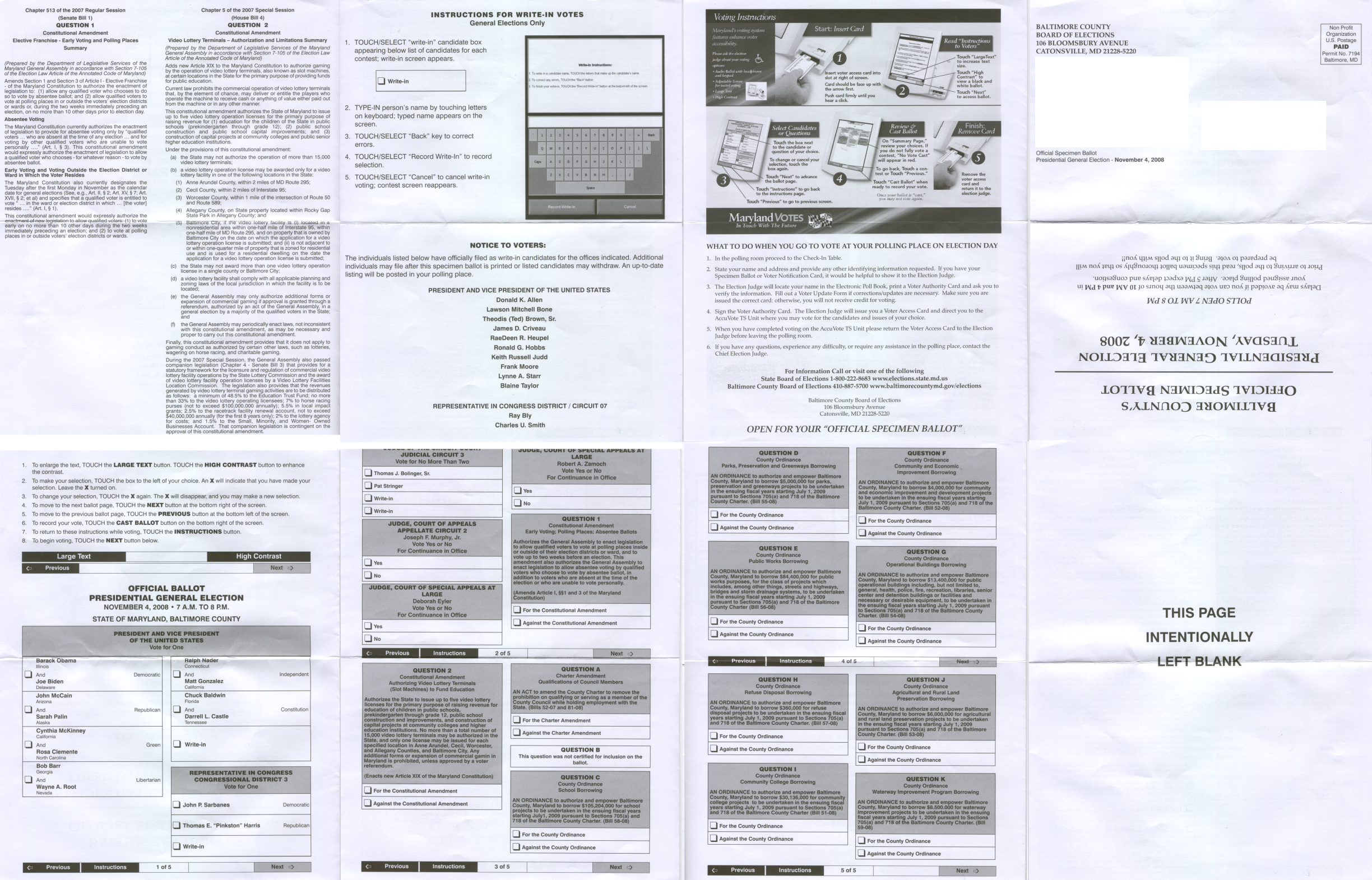