VACCINES FOR A VIRUS WHICH HAS NEVER BEEN ISOLATED? This is NOT science!

Is this a virus or an exosome?
The war between the followers of Pasteur & Bechamp may be the most important issue in the world today & yet it is barely understood by the general public.
Pasteur favoured Germ Theory & Bechamp advocated for Terrain Theory. 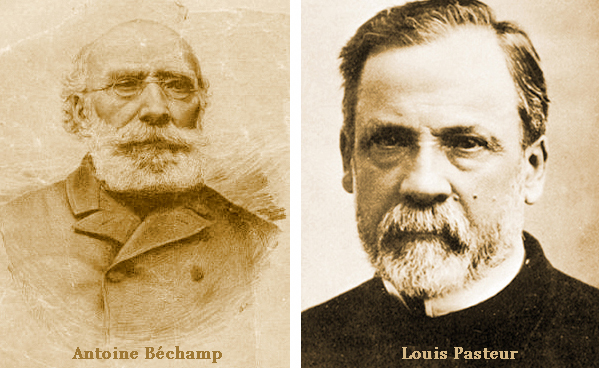 In spite of confessing that he had poisoned his victims to achieve his results, Pasteur's theory was adopted by the Rockefeller Institute & their developing medical schools because it afforded them the opportunity to develop & profit from pharmaceuticals derived from the waste products of the oil & gas industries.
Naturopaths & hygienists favoured the Terrain Theory which recommended scrupulous cleanliness & good nutrition to defeat disease.
http://maronewellness.com/pasteur-vs-bechamp-an-alternative-view-of-infectious-disease/
Both systems worked to eradicate diseases

It is December of 2020, the end of the worst, most stressful year in my living memory.
The UK is rushing to be the first country in the world to provide vaccines for coronavirus to it citizens.
My first point ought to be obvious but does not seem to have been discussed very much on main stream media.

The vaccine manufacturers do not claim to be producing a vaccine against SARSCov2 & its subsequent disease, COVID19.
Instead all the studies & government papers refer to a huge raft of Coronavirus vaccines. 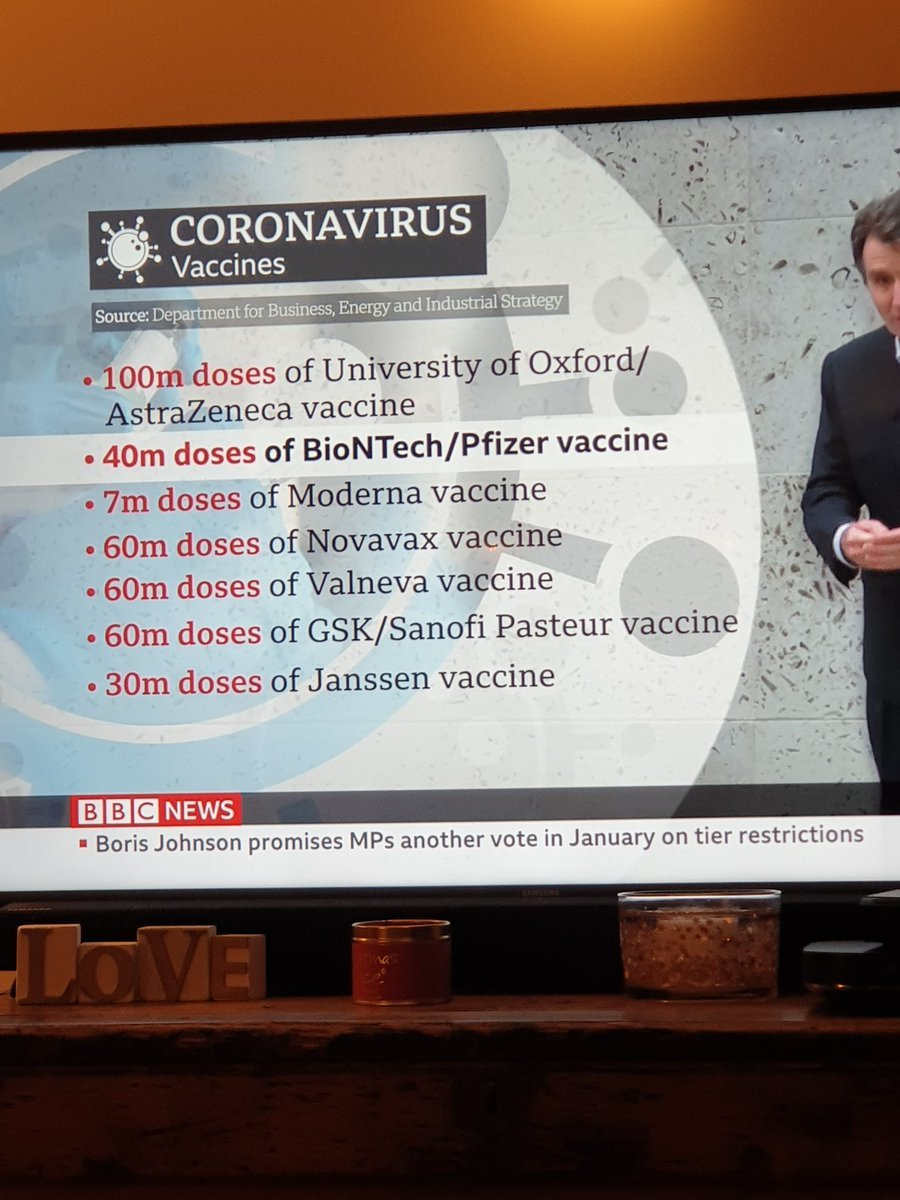 There are thousands of coronaviruses & they mutute constantly, we are told by virologists, so how can a vaccine to combat them have been produced in such a short space of time?

Concerned about this slip from specifying the illness we are locked down, masked & hand-washing to prevent I set out to find out as much as I could about the vaccines which we are expected to accept.

First I looked at the Oxford University AstraZeneca version & came up with a very interesting video:

I had previously (23rd November) addressed Oxford University via Twitter, with a very important question as follows:

Big-P-Harma's "virus genome" is a computer sequenced copy of a non-isolated, non-purified Wuhan sample "grown" in monkey kidney cells & anti-biotics which failed to meet Koch's postulates.
How can science attenuate a virus that has NEVER been correctly identified or verified?

I supported this question with my previous investigation into the existence of #SARSCov2 here:
https://hive.blog/news/@francesleader/no-one-has-proved-that-covid19-exists-a-collection-of-the-evidence

Plus my doubts about the origin of the genomic sequence being used as the foundation for all vaccine development, supported by flaws found in the early Wuhan scientific study dated 20th February 2020:

This was the study used to computer generate the original #SARSCov2 genome sequence.
Note that Vero E6 cells (referred to) are monkey kidney cells.
Quoting from the study:
"Virus isolation from the clinical specimens was performed with human airway epithelial cells and Vero E6 and Huh-7 cell lines" & in the conclusion: "Although our study does not fulfill Koch’s postulates, our analyses provide evidence implicating 2019-nCoV in the Wuhan outbreak."

I had concluded that the material named SARSCov2 had not been adequately isolated or purified before being identified as the cause of COVID19. Furthermore, it had never been injected into any living being & caused the disease to confirm that it was indeed the pathogen being sought.

I was horrified to observe that all European studies had failed to isolate any viruses & were, instead, relying on matching materials to the computer generated genomic sequence from the original Chinese experiments.

I waited for the Oxford team to respond to my query, observing them happy to reply on Twitter to praise & thanks.
On December 4th I tweeted again, quoting my original question, but this time stating:

"Oh dear.
OxfordUniversity, @UniofOxford has not answered this critical question.
I can only conclude that they dare not admit they have created a protein spike genome from a computer model.
We seem beset by these unreliable models which have robbed the world of its freedom."

Meanwhile the UK Goverment had, via the Medicines & Healthcare products Regulatory Agency (MHRA), granted a temporary & emergency approval to Pfizer/BioNTech for their new vaccine to be adminstered to selected groups of UK citizens FROM THE FOLLOWING WEEK.

I was extremely alarmed, as you can imagine.

Could it be true that our authorities were permitting the vaccination of our most fragile demographic, ie the over 75s with a concoction based on a computer modelled genomic sequence derived from a flawed Chinese study?
Surely someone had questioned it?

Pfizer had produced this document to elicit the MHRA's approval:
A STUDY TO EVALUATE THE SAFETY, TOLERABILITY, IMMUNOGENICITY & EFFICACY OF SARS-COV-2RNA VACCINE CANDIDATES AGAINST COVID-19 IN HEALTHY INDIVIDUALS
https://pfe-pfizercom-d8-prod.s3.amazonaws.com/2020-11/C4591001_Clinical_Protocol_Nov2020.pdf

The contents of which, over 140 pages, had been carefully queried in this article:
https://therealslog.com/2020/12/03/exclusive-how-health-secretary-matt-hancock-misled-parliament-about-the-pfizer-vaccine/ 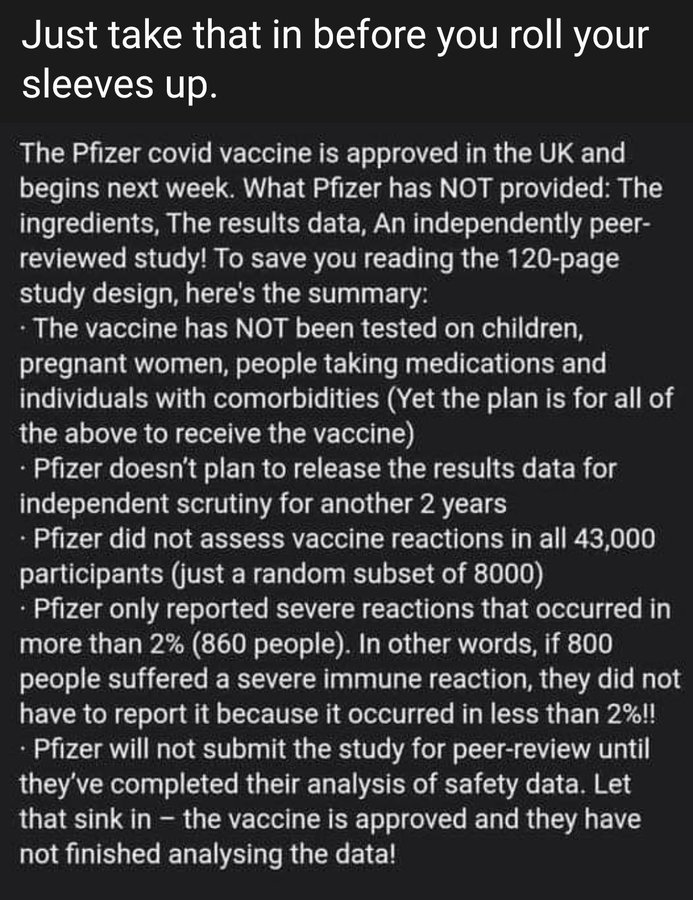 I became more alarmed when I came across this document produced by the UK Medical Freedom Alliance:
https://www.ukmedfreedom.org/resources/vaccine-documents

They state "The UKMFA have produced a referenced consent form for use by doctors and their patients to aid the process of obtaining full informed consent before having a COVID-19 vaccine.
It outlines the relevant legal obligations and protections that must be addressed and also relevant medical information about COVID-19 vaccines that must be disclosed to, and discussed with, patients."

Finally, after much effort I was able to procure a brief outline of the ingredients in the Pfizer/BioNTech vaccine, but was dismayed to see that the mRNA factor was not better explained. 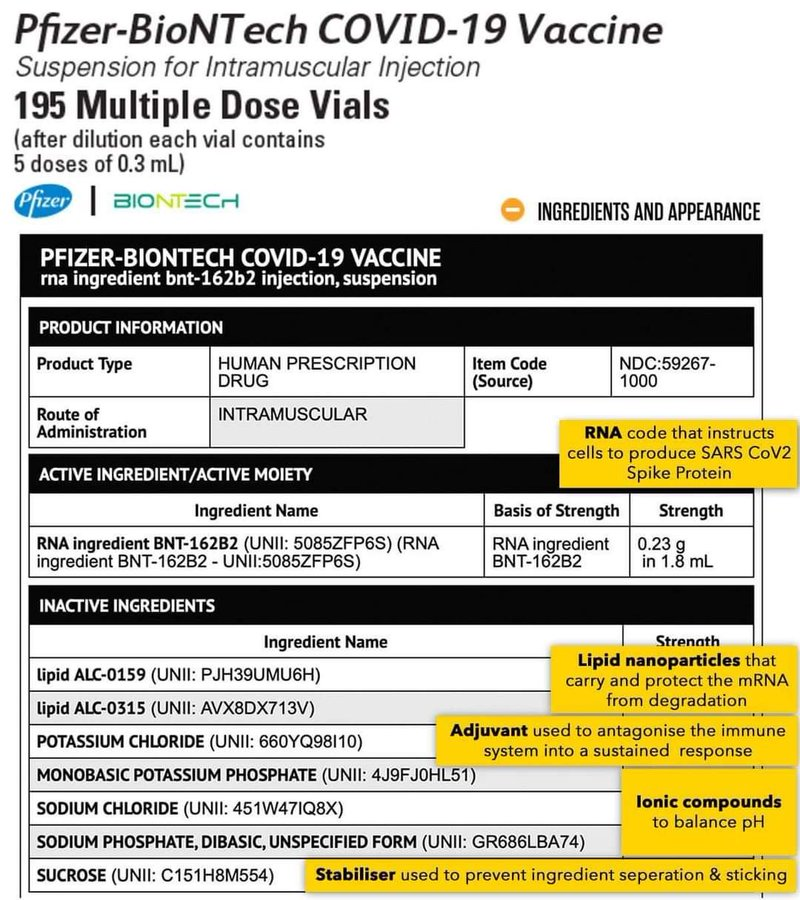 I realised that as no whole virus has been isolated, either by the above mentioned Chinese study or since by vaccine manufacturers, the only way that an mRNA (messenger RNA fragment) could be constructed would be by genetic modification from computer code.

Two concerns reared up in my mind:

Others were beginning to sound the alarm: 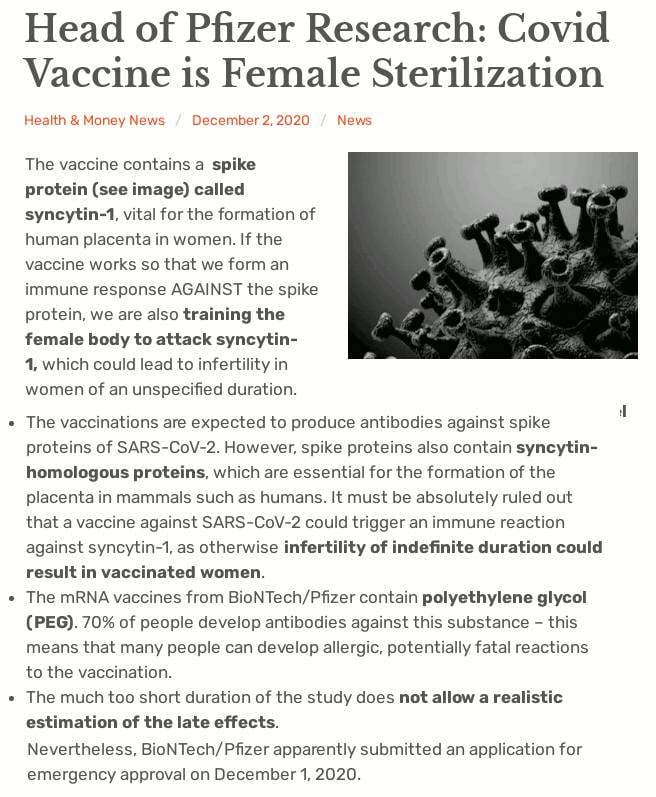 Then a group of medical professionals found no less than 10 flaws in Drosten's paper, crucial to the European trials.

Come on, Oxford University, even you must admit that this is not science! 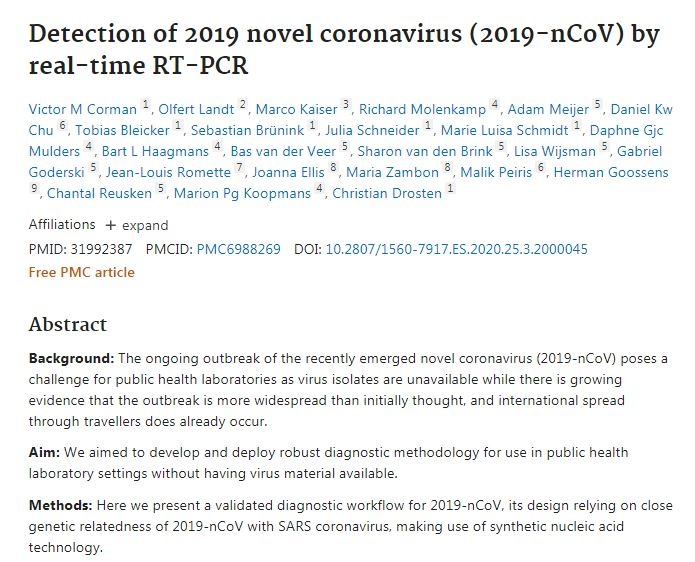 Old concerns began to prick my memory:
Nano metallic particles were found in all vaccines examined by this enterprising couple who set up an independent lab in Italy in 2017.
They were raided by police & all equipment confiscated.
Read the article here:
https://www.shiftfrequency.com/metallic-nano-particles-found-in-vaccines/
Further details here:
https://www.shiftfrequency.com/contaminated-vaccine-epidemic/

Why would undisclosed nano-particles of a wide range of metals be found in ALL vaccines?
Why were the discoverers closed down?
What happened to them?

With so many unanswered questions I can only close this article with the promise that I will continue to research & investigate. Our lives depend on us reaching the truth.

I was interviewed about my views by Tony Gosling & he did his very best to gatekeep me away from stating my truth:
https://www.bitchute.com/video/GOelwYptrJoG/

As an afterthought, consider the research that Alex Jones presents here:
https://rumble.com/vbmhv8-banned-video-the-lawsuit-against-covid19-vaccine.html

Postscript:
This video is a great comfort - David & Dawn tell us what really makes us ill.

If you can help to answer my questions you can find me on Twitter at:
https://twitter.com/2013Boodicca
Or on Facebook at:
https://www.facebook.com/franceselaineleader/
Or by email:
[email protected]

Fantastic work here. Thank you for your courage & dedication in these strange and testing times.

Please gain food independence if you haven't already done so. I believe food is the way in which they will enforce the vaccine, even upon the skeptics. https://peakd.com/hive-120078/@samstonehill/how-will-skeptics-be-forced-to-take-the-vaccine-without-it-being-made-mandatory

Great post. Germ theory is not science. Vaccinations are not science. Science is no longer science, it's a religion...

MHRA has responded to my email questions about the origin of the genomic sequence from which the material known as mRNA in the Pfizer BioNTech #vaccine derives.
I quote:
"The DNA template used does not come directly from an isolated virus from an infected person."
&
"The DNA template(severe acute respiratory syndrome coronavirus 2, GenBank: MN908947.3) was generated via a combination of gene synthesis and recombinant DNA technology."
https://assets.publishing.service.gov.uk/government/uploads/system/uploads/attachment_data/file/944544/COVID-19_mRNA_Vaccine_BNT162b2__UKPAR___PFIZER_BIONTECH__15Dec2020.pdf