rabona cross-posted this post in Rabona Official 5 months ago

Hive has its own football (European) or soccer (American) game. It has been around for a while now, starting from September 2020. For the whole time the game seems to be in the background, slowly but surely improving the design and the tokenomics.

You buy in the starter pack, and then just adjust your team and formation. The games “play” the matches for you, simulating them against the other players. One season lasts for around seven days and if you are on the top of the table you advance to the next level league. If you are in the bottom three you drop of to lower league. 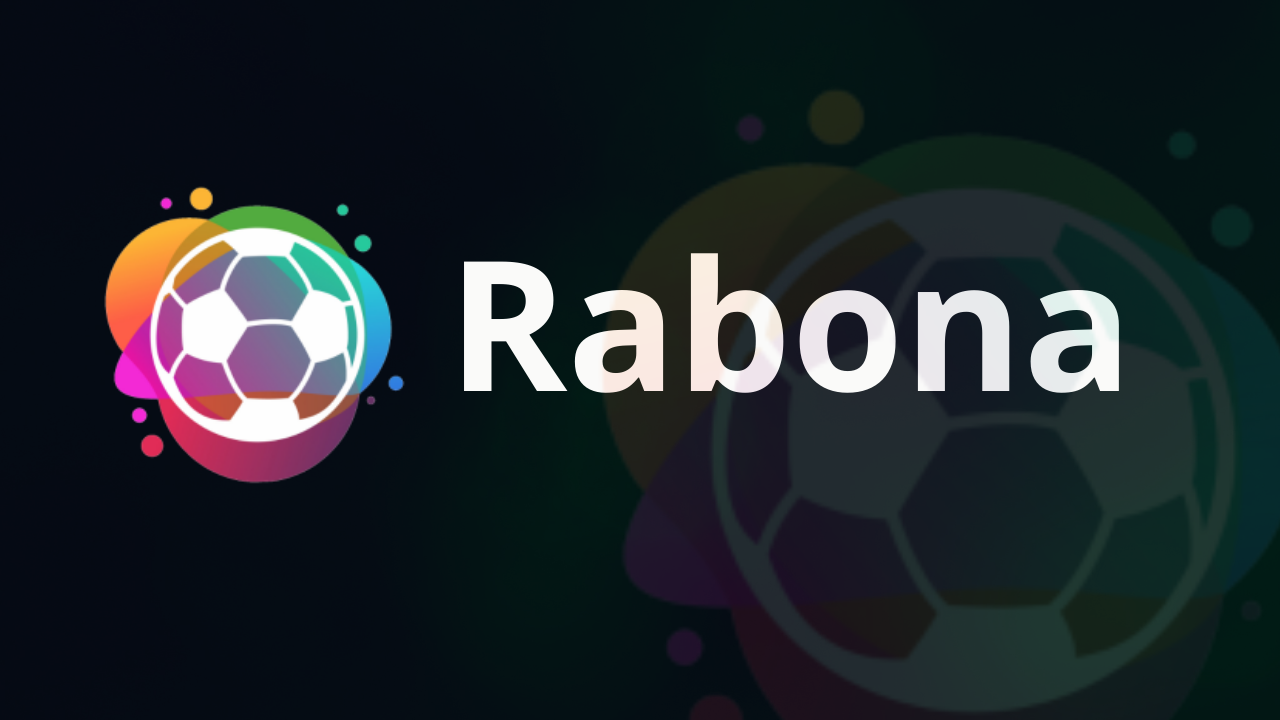 The game has its own in game token RBN, that is earned/spend with each game. Earnings comes from selling tickets, shirts, fan material etc. Also, with selling players. You spend RBN on players salaries, stadium maintenance, buying players etc. You need to balance out your costs with your income to stay profitable. Meaning nice ticket sales and not too much player salaries.

Here we will be looking at:

Here is the chart for the numbers of active daily players. 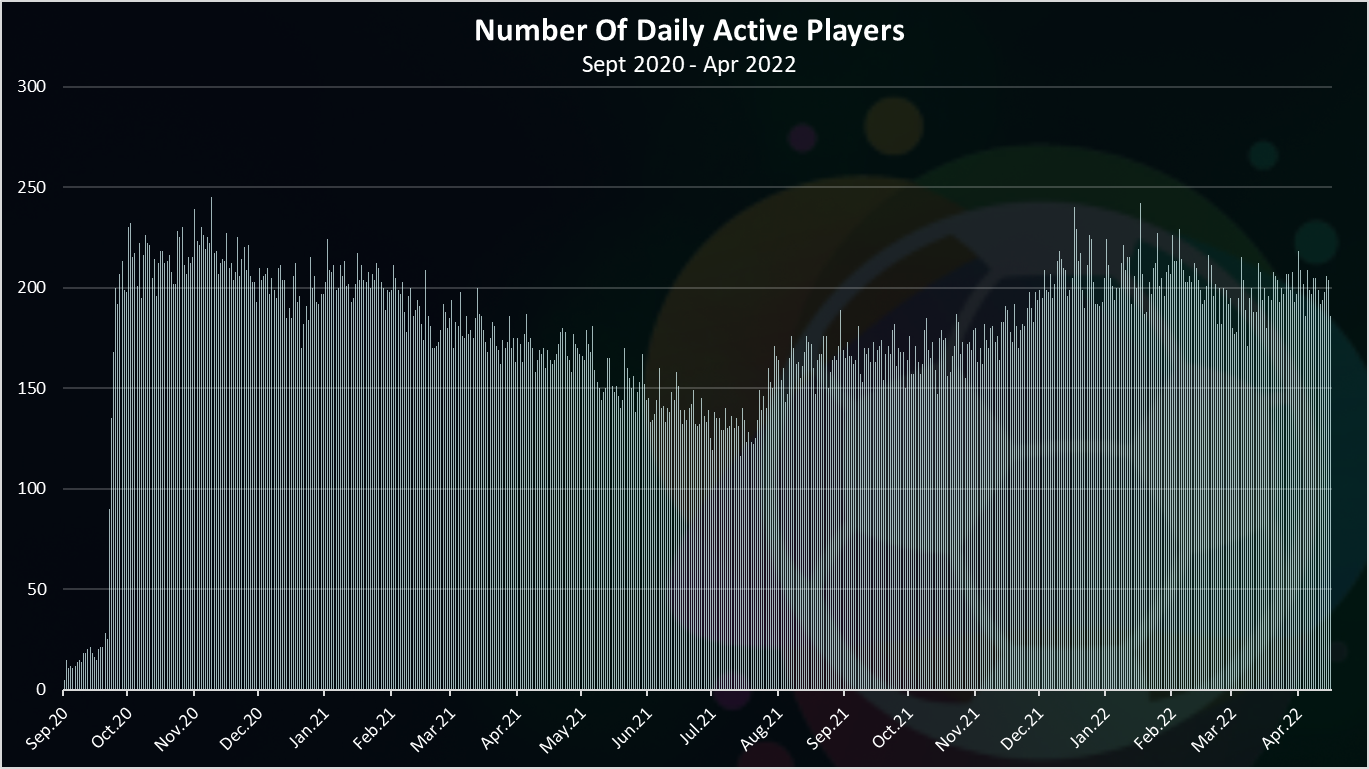 As we can notice there is some activities in the beginning of September, most likely some testing, but the game really started at the end of the month around September 25th.
There seems to be some excitement at first, but then a slow decrease until August 2021. Then we can see some uptrend again and now we are around 200 DAUs, around the same as it started.
Overall, quite a steady number of DAUs for the game.

The numbers are quite stable in the period.

Since this game is a semi idle game, there can be some players that are not active each day but come around from time to time. The numbers of the monthly active players might gives a better representation. Here it is. 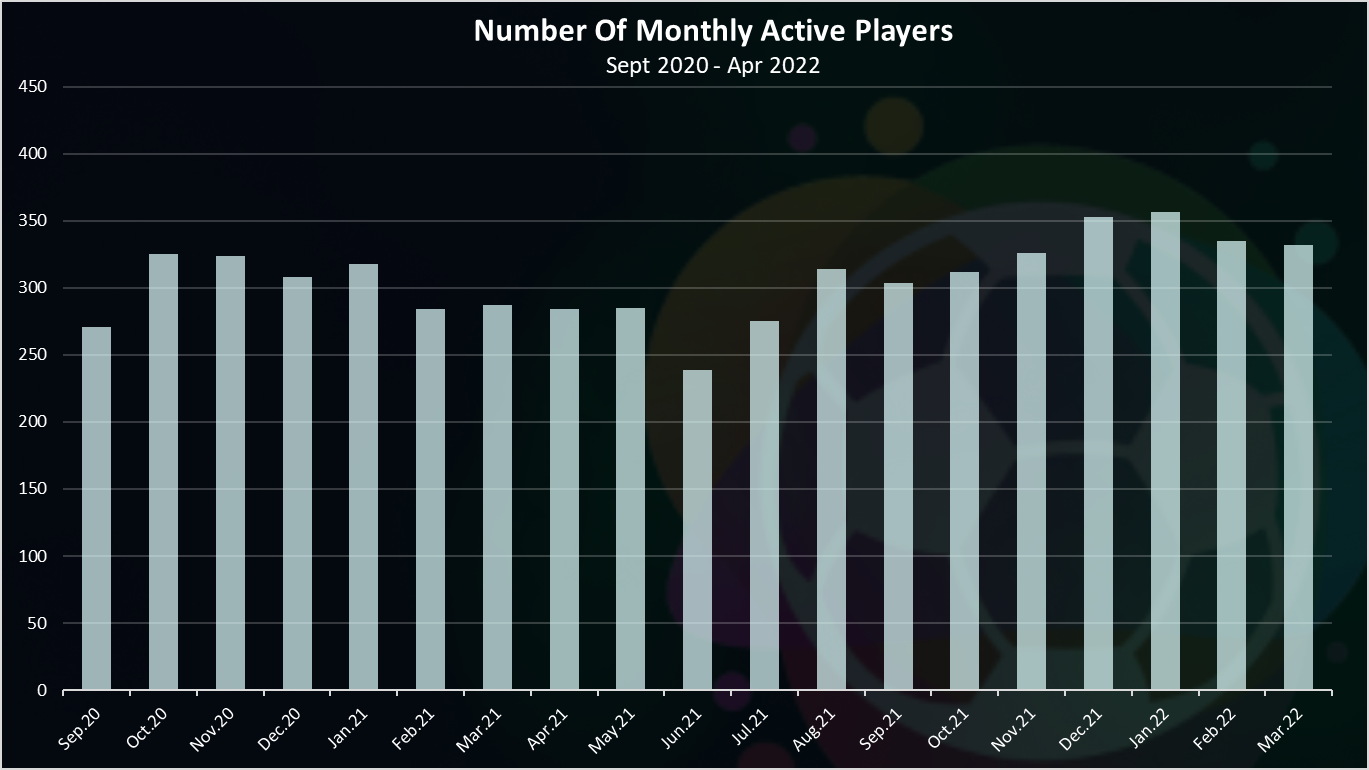 Some similar trend as for the DAUs, but just a bit larger numbers. In the last months we have between 300 to 350 monthly active players.

What is the number of transactions made per day?
Here is the chart. 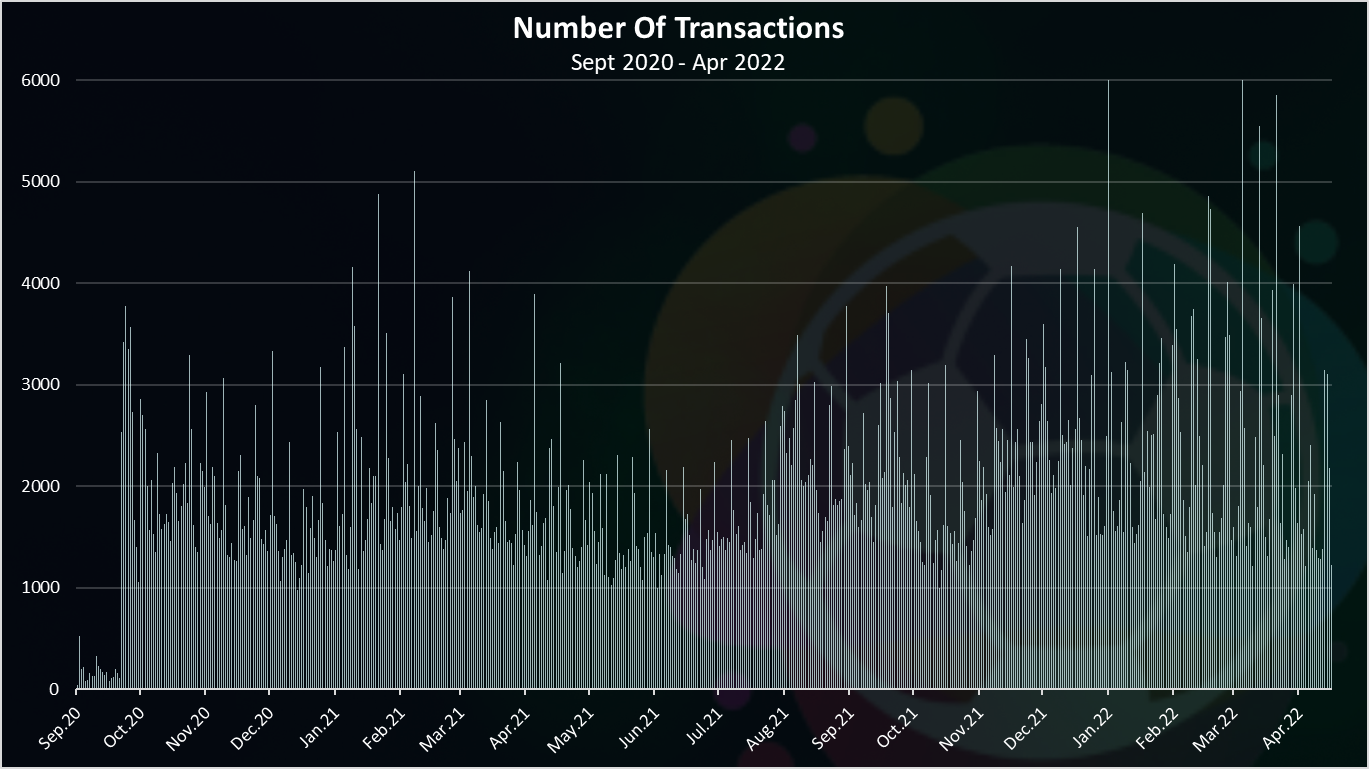 Quite a volatile chart here with a lot of oscillations. But it seems there is an uptrend. In the last period on average there is around 2300 transactions per day.

Here is the chart for the top operations made by players 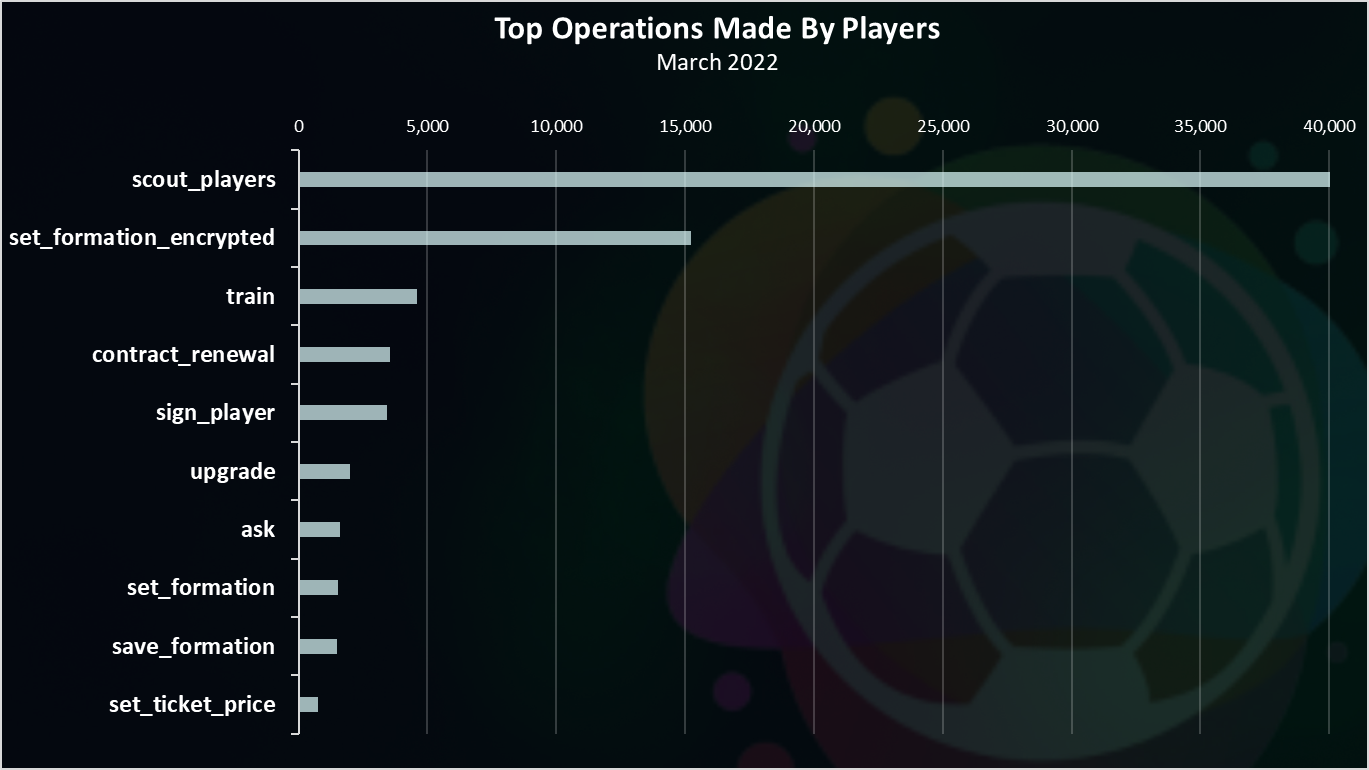 Scouting players is on the top by a lot in March 2022. The look for new players is the most attractive thing in the game. On the second spot is the formation setting and then the training.

Who is scouting the most? 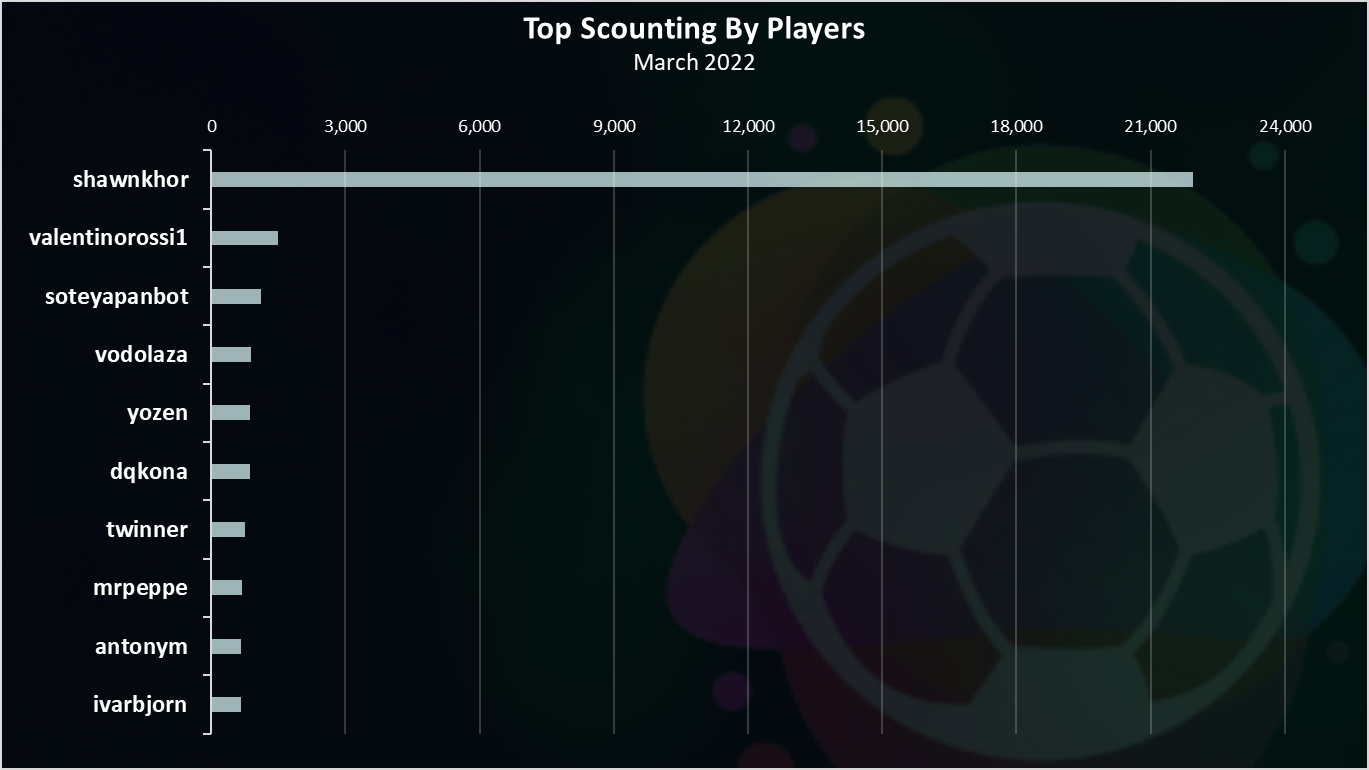 @shawnkhor is on the top here, with a massive 22k scouting activities. @valentinorossi1 is on the second spot.

What type of training activities are the players making? 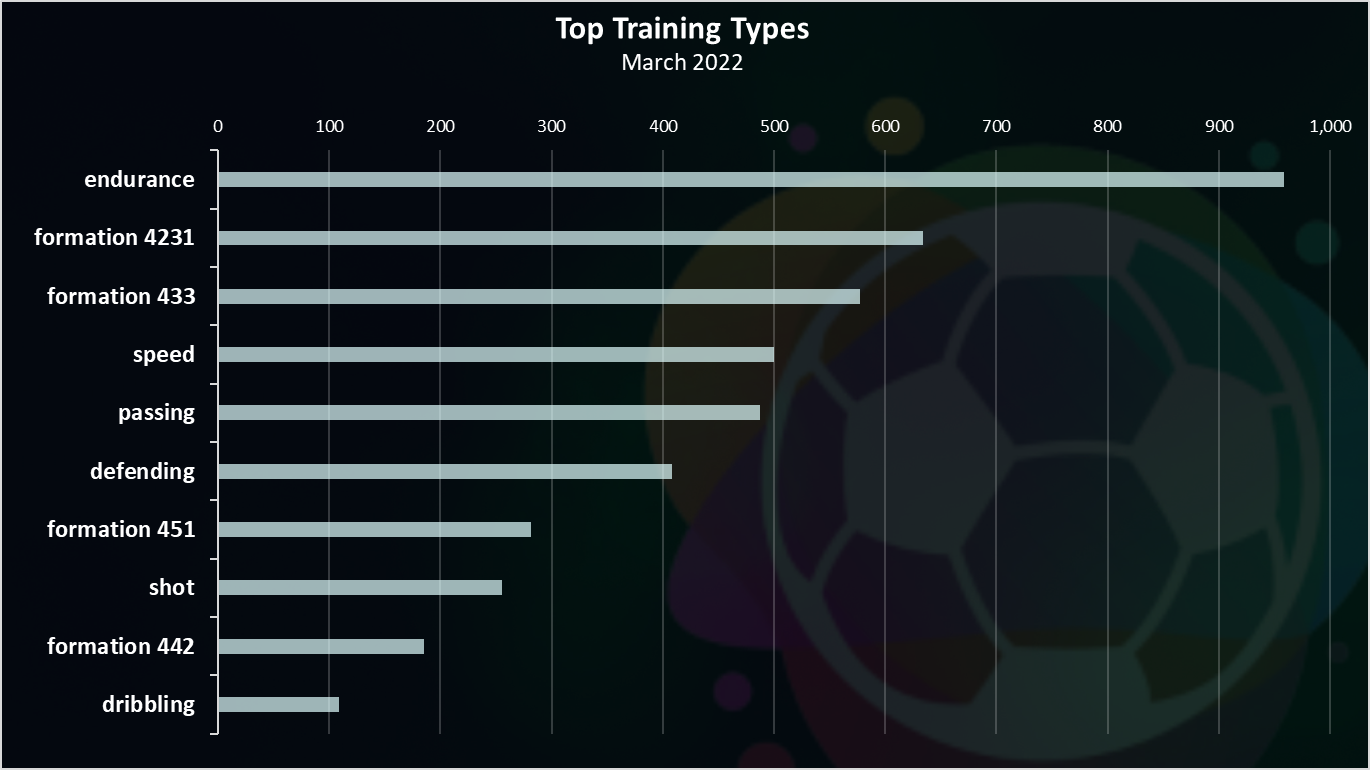 Endurance is the most trained activity, followed by 4231 formation.

The game has its token, but for the time being there is quite low volume and liquidity on it. 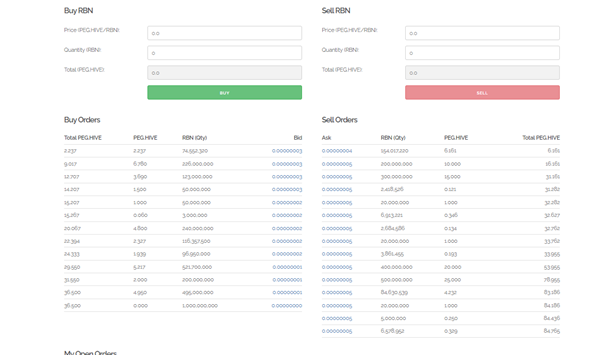 #cross-post
5 months ago in LeoFinance by rabona (65)Official Account
$0.00
4 votes
Reply 0
Browse to the original post by @dalz