I Recycled Something That Was Alive... From Zero To Hero - PART 1

This story will hopefully be some refreshing substance and good karma for those tired of monotonous reward-milking material.

It's also fascinating how the law of attraction works.

Yea, I haven't posted much lately, but I'm warming up to trying again to keep in touch with some nice people.

I was out late on a recent Friday night hunting for household items in the curbside recycling to save and sell. It was a rare night where I found almost nothing. Spirits were not soaring...

I was about to go home nearly empty-handed, even with a few blocks left to search (not my usual). I was tired and feeling down on my luck. Am I a quitter? No. It was 5 AM and I'd already been out for 2 hours. I had baseball on Sunday and didn't want my body clock to be too ass-backwards for that. Sometimes securing some extra sleep to be stronger for the next day works for me.

Anyway, since it was hot, the thought of turning a negative into a positive with a cold drink from a deli popped into my mind. Hydration is a plus and better note to end the night on. This would also force me to walk one more block of recycling to get to the store. See, not a quitter.

Anyway, near the end of the street, I struck a goldmine of amazing stuff.

It was actually in the black trash bags. I don't usually go in those, but one was partially open as I walked by, showing several video game cases. This is usually where I make the exception to feel the bags with my third eye (hands) and scope out what other bags could possible have. If something feels promising, I'll cautiously explore. Honestly, a trash bag is either full of trash or full of household stuff like in the clear recycling bags, but it can often have higher quality stuff (I've been finding a lot of jewelry lately this way).

The pic below shows the results from this one spot at the end of my route. The orange carry bag was completely stuffed with electronics, nice watches, and designer eye-glasses. I was impressed at the quality of the items neatly tossed outside, but I've seen it far too often before. The guy's tax forms were also there, so I got a sense that he had plenty of money to spare, or got thrown out by his ex (a few pics of them were also there). He was a huge video gamer and hockey fan. 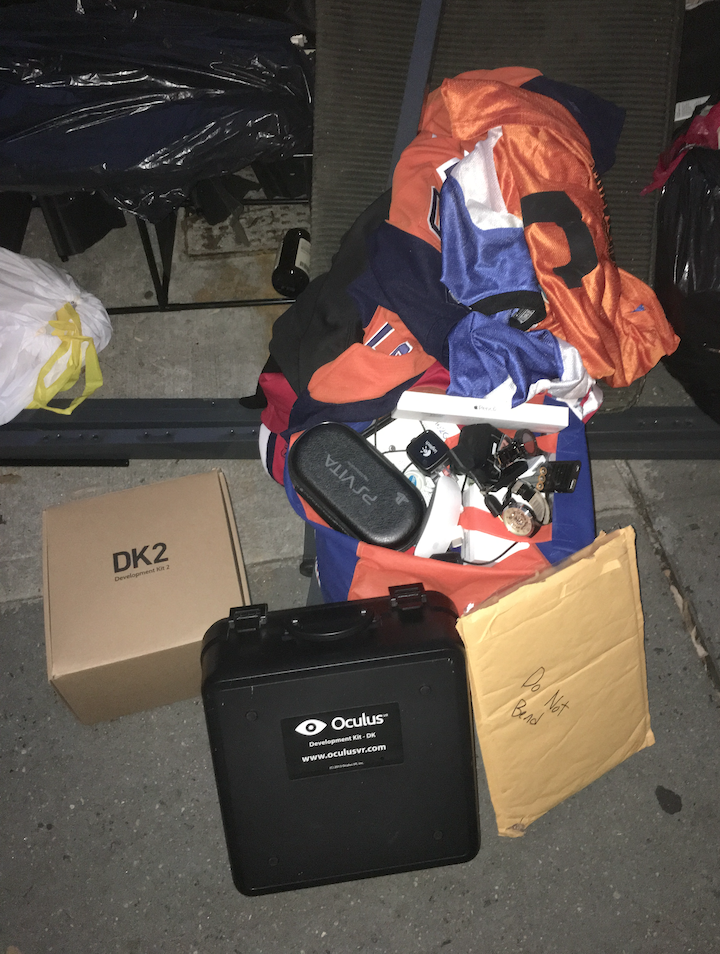 Yes, you can see TWO Oculus Rifts, with a full set of hand remotes, sensors and other attachments in the bag. All mint condition. You can also see a PS Vita case, which had a flawless console and 5 games inside. Nice scores. There were also Bose headphones, 2 iPhones, other Apple products, and much more. It was a legit haul and I was happy to save these items from being crushed in a truck in an hour. The feeling never gets old.

As crazy at this may sound, this is my norm. I was glad to have some reward for my effort and faith, BUT this is just where the story begins.

At the end of getting everything ready to carry home 1.5 blocks (without that cold drink), I was pleasantly surprised by a small young cat that was two cars away.

I occasionally see strays, but this one was not scared of me at all, came over to be pet, and was super friendly. I wasn't prepared for it since most cats dart away when I try to call them over. It really needed some attention, which I gladly provided. 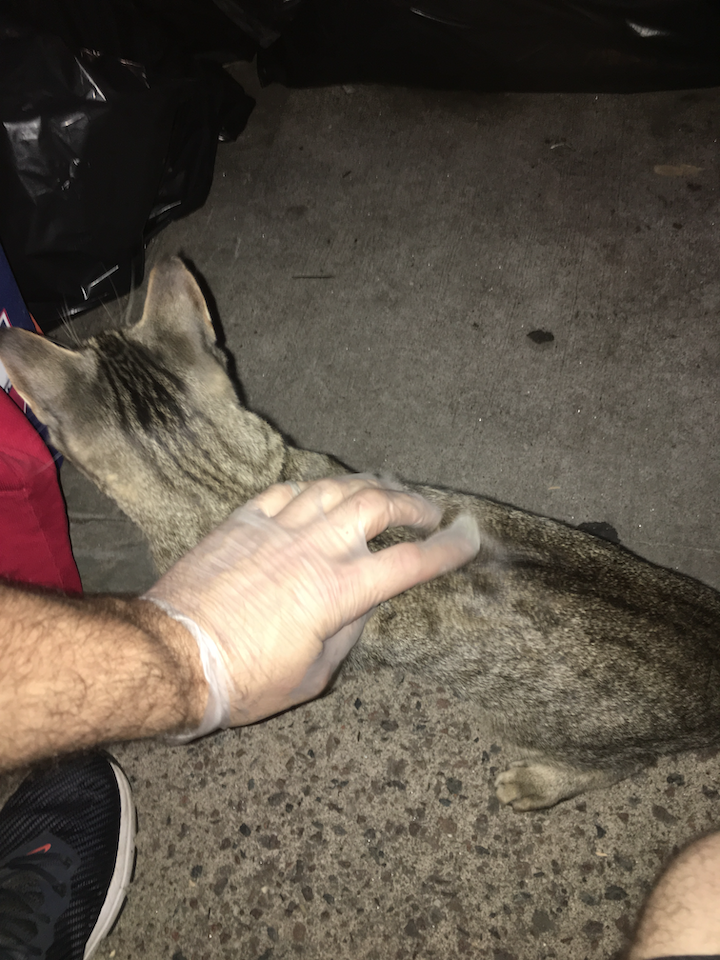 The cat was so nice and comforted by my attention that I started to think it was lost versus stray. There was a Tupperware container of dry food between two cars, so I got the sense that someone was looking after it to some degree.

As I had recently been debating getting a kitten now that it's been two years since my cat of 13 years died, it was nice to have a pleasant experience with one on the street.

I hung out with it for a bit, amazed by how nice and excited it was, and then started to wonder if this was a sign for me. Maybe the cat found me because it needed help. I highly doubted that anyone would keep or let a cat like this outside on the city streets, so the thoughts of rescuing it started to run through my mind. I spent about 30 minutes debating this, looking for any signs of an owner, watching the night turn to dawn. 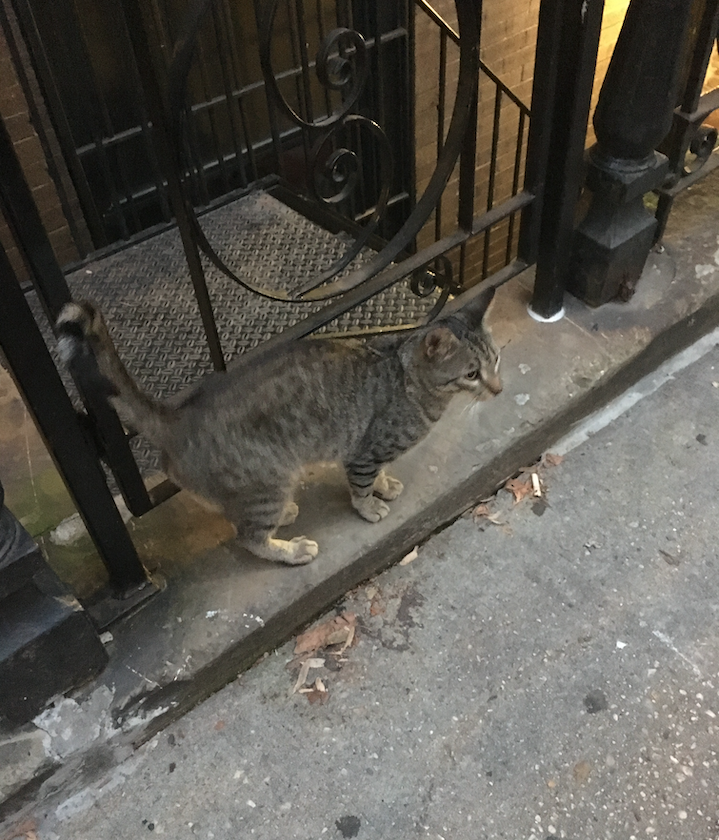 For those that follow me, I recently saved a baby bird and painstakingly freed a mouse from a glue trap outside.

With the thought of preventing a young cat from going feral by being outside too long, I decided to find a box and try to bring it home. From that point, I could secure it and then see if there were any signs for lost cats on the streets or for my neighborhood online. The trick was trying to carry everything else I found and the cat. It was a challenge, but I know how to put on a good balancing act. It was just a 1.5 block walk anyway. How hard could that be? Again, not a quitter once I set my mind to something.

Well... after initially being surprisingly calm for the boxing and half the walk, the cat became determined to get out of the box. When only ~5 buildings away, and after trying my best to juggle everything, it got out. Thankfully it didn't flee and wasn't upset. It just wanted out of the box.

At this point I had the dilemma of figuring out how to complete the mission without looking shady. People were out in the daylight walking their dogs and the recycling truck was unluckily making tons of commotion right where he popped out. I also had all types of electronics and hockey jerseys in my hands. It was becoming ridiculous. 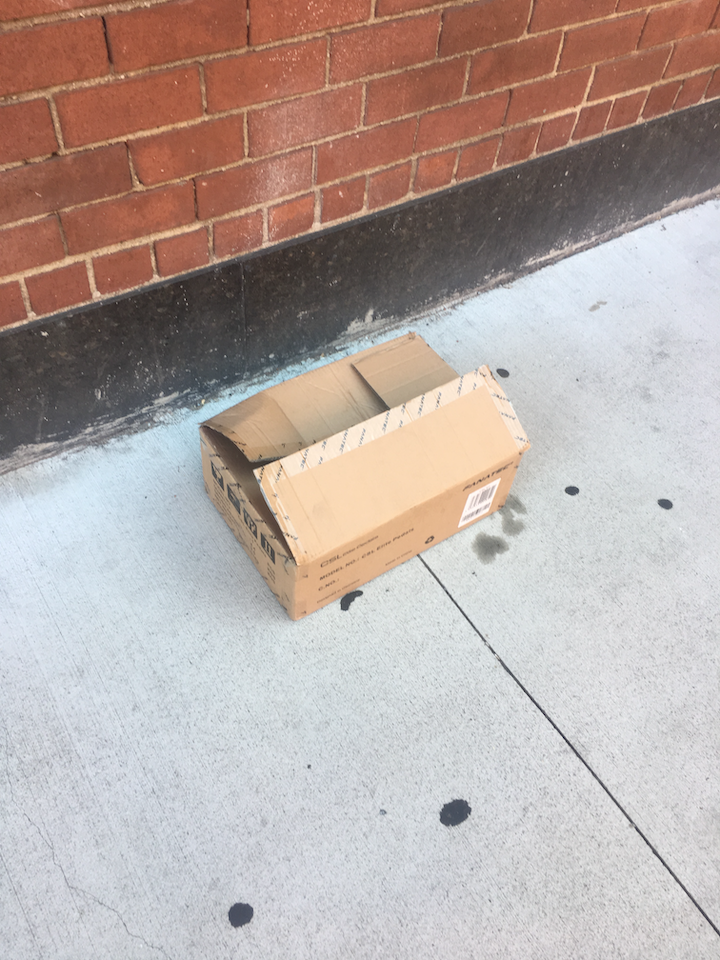 After some efficient processing of the situation, I figured that I'd have to let fate play out. I couldn't leave my stuff on the curb because the recycling truck right next to me might pick it up, but the cat didn't seem to be running away (giving me hope that it'd stick around long enough). I chose to let nature run its course by grabbing the items I found to bring them inside, and then return to see if the cat was still there.

If he ran back to where I found him, then that'd be a sign that he belonged there.

After rushing back outside, I couldn't find him right away. After a few minutes, I spotted him using the "outside litter box" and walking between parked cars on the curb. When he saw me, he didn't run, but he didn't quite stay. I had to try to rebuild his trust after the failed box attempt.

I trailed him calmly while admittedly looking weird as heck to anyone who didn't see the cat. We got close a few times, but he kept his space. It took a couple more minutes, but then...

Don't hate me. I don't want to write a novel tonight and need to get some momentum to post again.

Any guesses on what happened next?

Thanks for reading,
Matt

You really know how to catch people's attention, do you? 😁
I was hoping the cat followed you home willingly after getting out of the box but now I have to wait till you post the next episode.

Haha (innocently whistling). Episode 2 was launched. It should be a trilogy of posts to get to the conclusion.

I've read the second part and sorry for the 💩 💩 😁and for the pink dress as well. It must have been disappointing. Better luck next time and make sure you publish the last part soon as you're keeping me on my toes 😁

Whilst not a "cat person" myself, I hate to think an animal is neglected or suffering. Well done you!!!

I can't stop finding Legos outside.

Crazy what some people will throw away.

Hah love the suspense at the ending! Great haul and look forwrad to part 2.

How do people throw out such good stuff? I can never understand it but then again maybe I have never had that much money. Even though I'm comfortable we were taught never to waste growing up. We don't waste food and we don't waste money.
It's great to see you recycling great stuff like these. That is a quality haul and easy money to sell on.

It's nice you were so concerned about the cat as well. There are always a lot of strays roaming around so it's great to see how much you cared about it.

Real men rescue kitties!! 😍 So much love flows out via your posts @steemmatt - that you got such a good haul is karma working in advance. Kitty will find oyu and connect if/when it's ready. Our resident "stray" Mr MD, slept inside in the spare room last night, voluntarily. Finally. After I left the door open for him for months.

Love the small ways you're changing the world, and it brightened my morning of @naturalmedicine curation to see your loving, hopeful post first. 😍

Thank you very much. Wait until you read the second part. This is just the warm up.

Congrats on level 2 with Mr. MD.

$0.00
Reply
[-]
naturalmedicine (75)CO-ADMIN 4 months ago
This post was chosen by @artemislives for our Earth Healing Curation #19. –Check it out Here.
CONGRATULATIONS!! and thank you for creating wonderful, original content on Hive.
Please share and support our curation, and share some Hive-Love to the other posts selected too.

EARTH HEALING is a Natural Medicine project which supports the regeneration & healing of Mother Earth on HIVE
$0.00
1 vote
Reply
[-]
doctorcrypto (62) 4 months ago

A little girl came running up the sidewalk and loudly cried out "Mittens!!"
The girls mom who was not far behind, was so thankful for finding their beloved cat that she wrote you a $10,000 check on the spot.

Can't make it up... have a running joke with an old friend about a cat named Mittens. In this case, the cat would have two names. One would be something normal. The second for use between my friend and I, would always be Mittens.

Great idea on the reward. Daydreaming now about how I clearly messed that up.

Kindness to animals and saving the Earth from all that landfill?? Damn - you need a Super Matt Cape!! 😍 Love it!! An awesome natural earth medicine combination!

Curated for #naturalmedicine by @artemislives.

Nice I’ve been wondering what you e bed up to, I haven’t seen many of your posts since you caught the Rona and recovered. Hopefully you’re feeling better at this point and no relapses.

Solid find with the little kitty! My wife found (hers first) our cat when she was visiting a friends house in a tough area and brought her home. She lived for 9 years! Several years before I met her.