The Art of Hiking and Cosmological Maintenance 6

The fabulous bards sang those words many years ago, following the long line of troubadours who wandered into the mighty river and heard its enchanting song with open ears then decided to jump in, and wouldn’t you know it, the current was strong, turbulent, and chaotic. So the lesson was learned, whispered down the centuries, that if you want to get the most out of this wild journey then you must turn off your mind, relax, and float downstream. 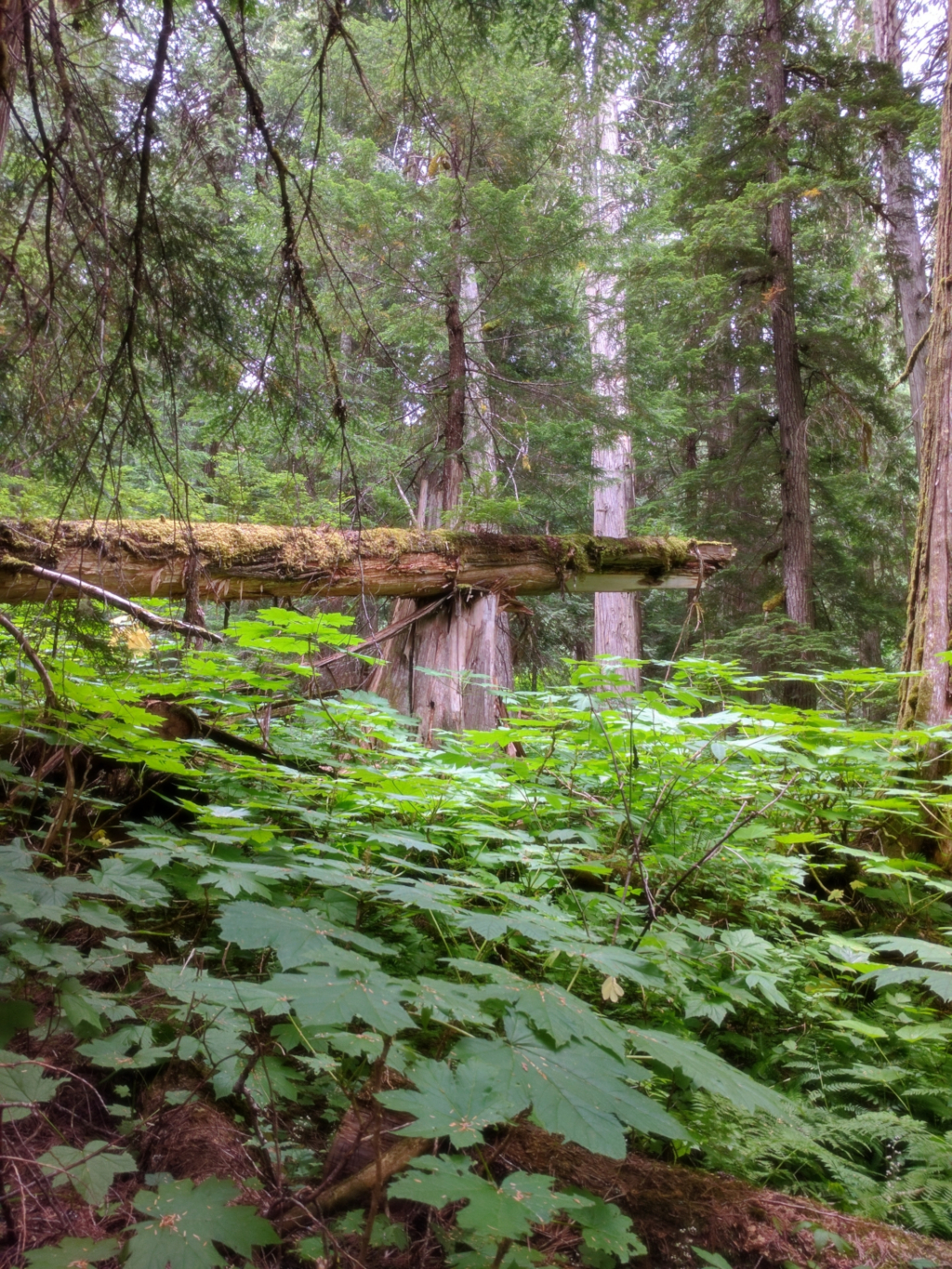 The stream is a frequently used metaphor for existence, wild and lush, filled with joys and sorrows, laughter and tears, danger, opportunity, there is no point in struggling against it, relax little frog, find peace in the journey. Always downstream. For when all is said and done, you will merge with the great sea beyond so-

Lay down all thoughts, surrender to the void
It is shining, it is shining

Now that you have ceased to struggle against the vagaries of life, you can smile to yourself and look around glassy-eyed at the minute details that you have often ignored, but which now glisten with their own inner essence. The shape of the leafs, the color of the fallen trees, textures, the spirits quivering naked in the thicket- all interwoven in that most wonderful fabric of existence, present everywhere at once, hidden sometimes-

Yet you may see the meaning of within
It is being, it is being

Who doesn’t love a good river metaphor? Who doesn’t want to lie back, spread out his/her arms, and go with the flow? Every little thing is gonna be alright. One of the most wonderful experiences in life is to have that special someone who in the confusion and turmoil of the mind, looks at you and with a touch or a wink or a smile lets you know that it’s going to be all right, dispel all fears from your shining diamond mind-

So it pays to go with the flow. But what happens if your journey is upstream? Then shit gets a little more complicated, my flower child. Not many bards or story tellers have shouted the joys of struggling against a deadly current. It's difficult to achieve enlightenment while clinging to a log.

In pop culture, one of the most popular upstream movies is Apocalypse Now, a journey up the metaphorical river and into the heart of darkness. Spooky huh? So it is when you're hiking and you let your mind play tricks on you. That door has now been painted black and we are confronted with the most unpleasant aspect of living: dying. 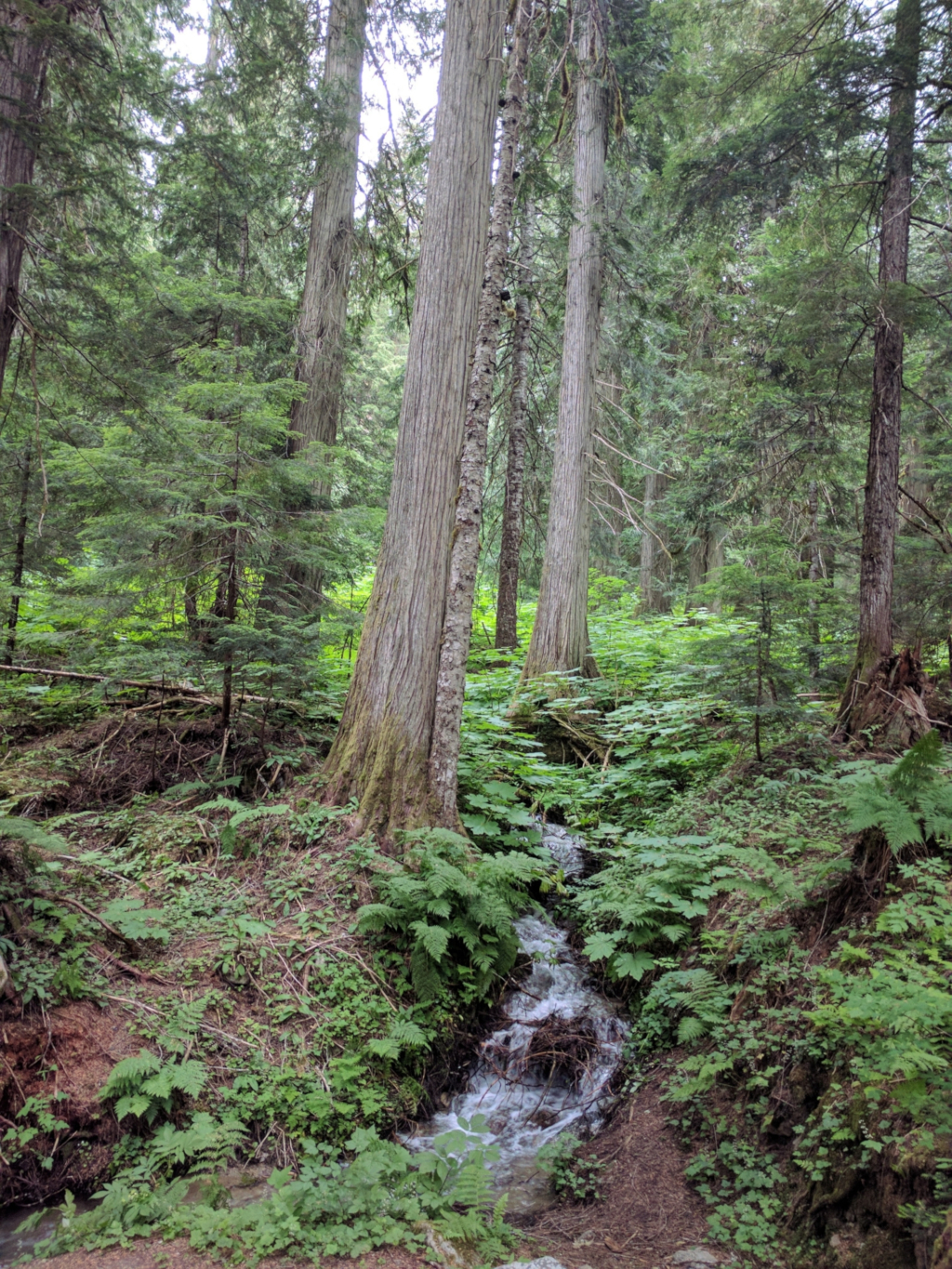 We had been hiking for nearly an hour and still saw no end to the stream, or a beginning for that matter. Haunched under the weight of our gear we soldiered on. With heavy footsteps and rivulets of sweat rolling down our faces, the world had become more menacing. Were we lost? What lay further up ahead? Did we miss a sign? Should we turn back?

We had to keep going. Marching on in solitude. Standing up straight. No other choice and no point in turning back.

John Lennon's smooth reassuring voice faded in the sound of the rushing water. A new melancholic sound emanated from the river. Somber electric riffs, suspenseful drum beats, as Jim Morrison's face appeared on the swirling eddies and began to sing his haunting anthem, warning you that maybe just maybe this is the end, beautiful friend, this is the end, my only friend, the end.

What if a bear or a cougar or a wolf or a escaped convict came out of the wilderness of pain and ambushed us out here in the middle of nowhere? Can't phone the police for help. Coming here was a mistake. What do? We were alone but not unprepared. I had carefully placed a bear banger in the backpack’s belt pouch, its handle poking through the zipper, lock and loaded should Mr. Bear not listen to our twinkling bells or warning shouts, then decide that we were a threat that needed to be eliminated. I just couldn't very well go with the flow, could I? No ma’am. No sir. I’m as groovy as they come, but should another force of nature come at me with ill intentions, then there will be trouble. I’m no peaceful child of the 60’s but a punk with a bunch of cyber toys and if I have to aim that bear banger in your direction in self defense then this is

A spicy can of bear spray was holstered in the mesh pocket of my Osprey backpack, ready to be deployed in a moment’s notice should any species of ursine, feline, and/or primate phantoms materialize along the trail.

And as a last resort, I had my slick Swedish camping knife (with integrated flint) dangling at my side just in case I had no choice but to wrangle with ole Poo Bear (wink wink) and stab him in the ancient gallery at the edge of town. Bloody business too!

"Authorities say the hiker stabbed himself with a camping knife while running away from what he thought was a bear but turned out to be a low hanging branch."

So my imagination ran wild as we made our way along the river trail, seeing all kinds of horrors and no help forthcoming in this wild land. Gotta ride the snake who’s old and his skin is cold.

Ride the king's highway, baby
Weird scenes inside the gold mine
Ride the highway west, baby

A gurgling brook meandered across our path. We followed it downstream through the woods and the grasses, broken sticks crunching under our feet, down the ravine to merge with the great river beyond. 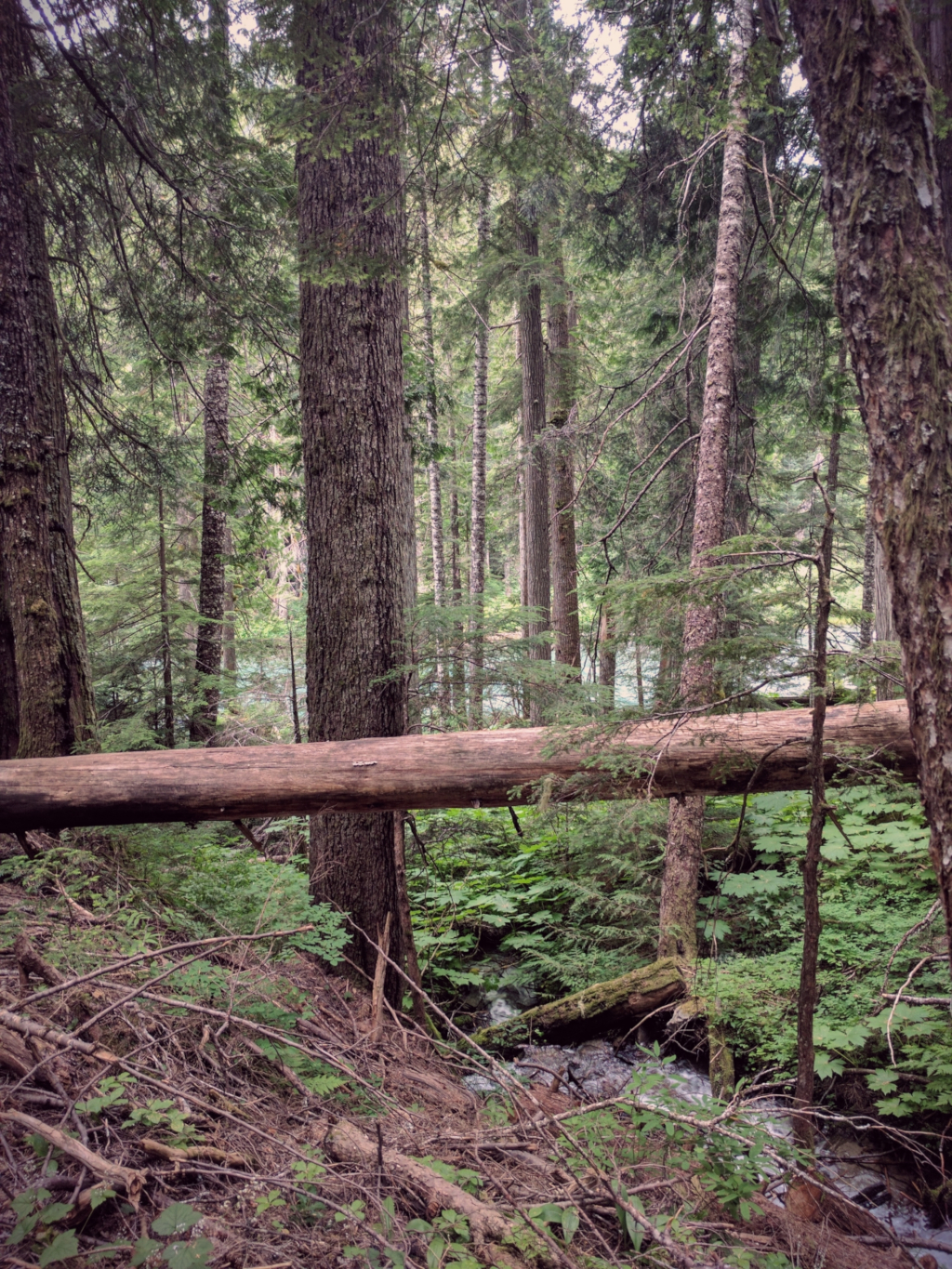 Then, it became clear that Jim had stopped singing because he already knew that the snake was long and its nest lay in the ancient lake fed by glacial waters, which now sparkled and spread before us in icy splendor.

“It comes from the lake! The river is the lake!”

The west is the best, Jim crooned. American style. But the British had already journeyed to the East and swam upriver along the Ganges. Older and wiser, they returned bewitched with the ancient message: It was all just an illusion, so chill out.

We switched the radio dial to hear the cacophony of drums, horns, and sitars, a sepia filter over the scene that was once again colorful with the sight of the river flowing out of the emerald lake, slowly slowly, as the butterflies fluttered on the flowers that grew along the bank awash in chaos theory.

We could see the narrow passage where the seemingly calm waters came together in a soft bulge, and the current grew stronger in liquid slow motion, then swoosh in a majestic rush across the mountains, smashing onto rocks, crashing on the fallen branches, roaring along the deep canyons that spilled into the great wide ocean.

We could see it clearly now. The river was an illusion. A branch of the lake reaching around the earth- an intermediate stage from one great void to the next. 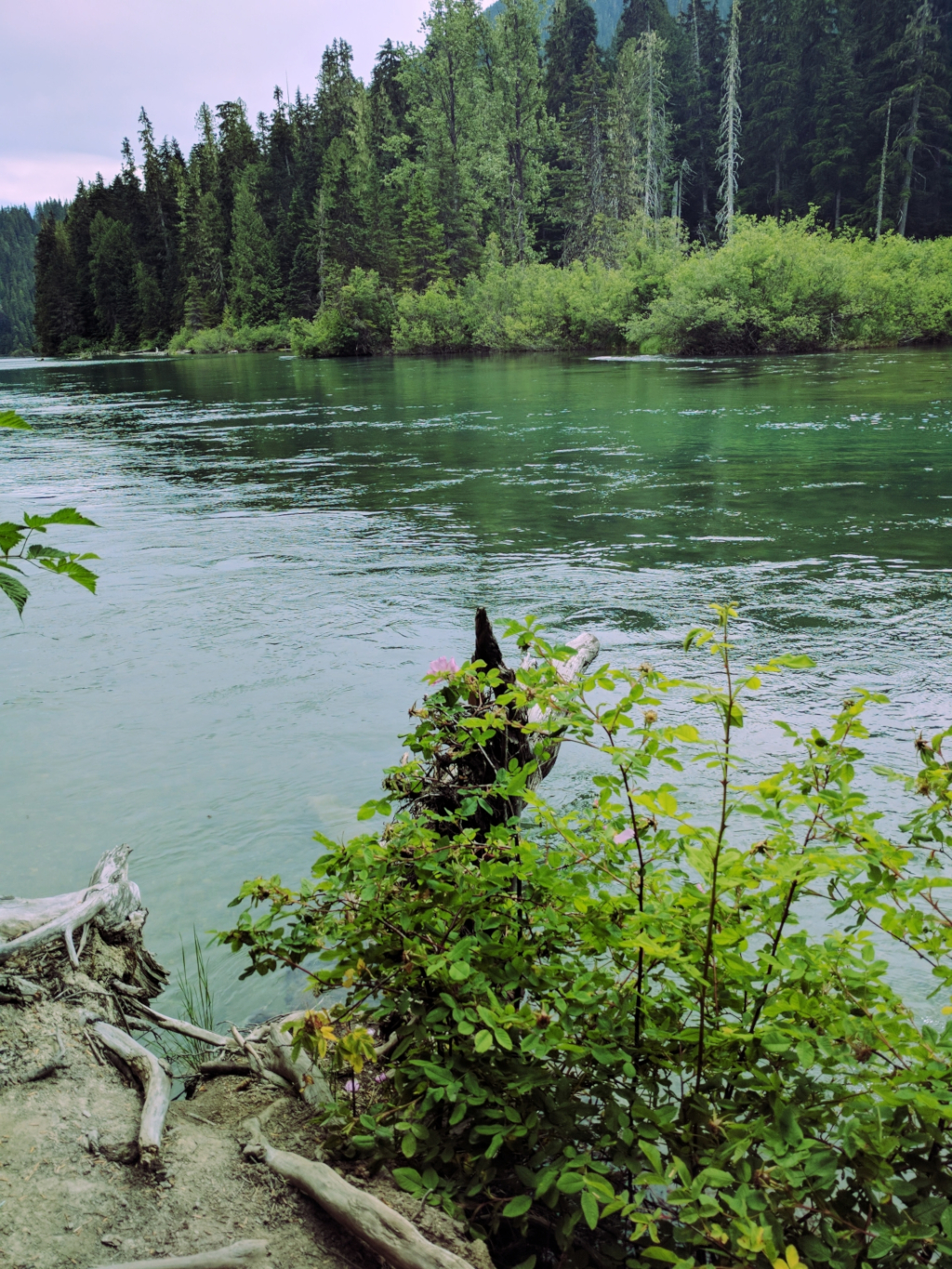 See? There was nothing to worry about. If we had kept our groove on and listened to the color of our dreams, we would have known that there was nothing to fear because the river flows both ways and regardless of where you end up, the message remains the same-

Tomorrow Never Knows by the Beatles


The End by the Doors

Thats an really great post ! .. Great metaphor used and beautifully written. I really like how you put this little poems in between ;) .. I read it twice already and will probably do it again later, hehe .. That is is the real spirit of Amazing Nature and you captured it so well from your perspective ! Thank you so much for sharing this with us !!! .. I am going to forward you to the AN-OCD channel ^^

Right on, @adalger! Thanks for dropping by and leaving this encouraging comment. This is a good time to remind ourselves how amazing nature can be!

You took me on a wonderful journey with this post, a feast for the eyes and ears. Thank you. I always long to lay back in the stream and let it take me away. Indeed choosing to flow with life is what has led me to the life I lead. I am very excited to have @riverflows introduce you to me, such a magical post that I will carry with me, thank you xxxx

Thank you, @trucklife-family! I'm happy that you find this post life-affirming and exciting. I had a huge grin while writing it, so I think it causes contact happiness =D

I absolutely loved this so much. Honestly, it's the best thing I've read on HIVE all week. And now, I have Jim in my head - in stereo, as it does, when the first bars creep in.

Rivers and streams have been a recurring motif this year as we all resist what is, yet try to flow all the same.

I was there in the woods with you, living dangerously.

Thank you for your wonderful comments and compliment, @riverflows. These latest pieces have been fun to write. I really enjoy ideas and music that transcend time. I'm happy that you enjoyed them too!