Introducing my son to power tools

My son is 9 year old this year, he loves creative stuffs and wanted to start doing small wood working projects which is great. He some times help me with my own projects when I need hands with holding boards or painting and finishing wood. As I work in the garage, he often comes with me and play with my hand tools and do children stuffs with my wood offcuts.

Recently, he's been collecting sandstones and breaking them into powder and pretend it's concrete when mixing with water. So I built him a mini anvil for him to use to break the rocks with the hammer. 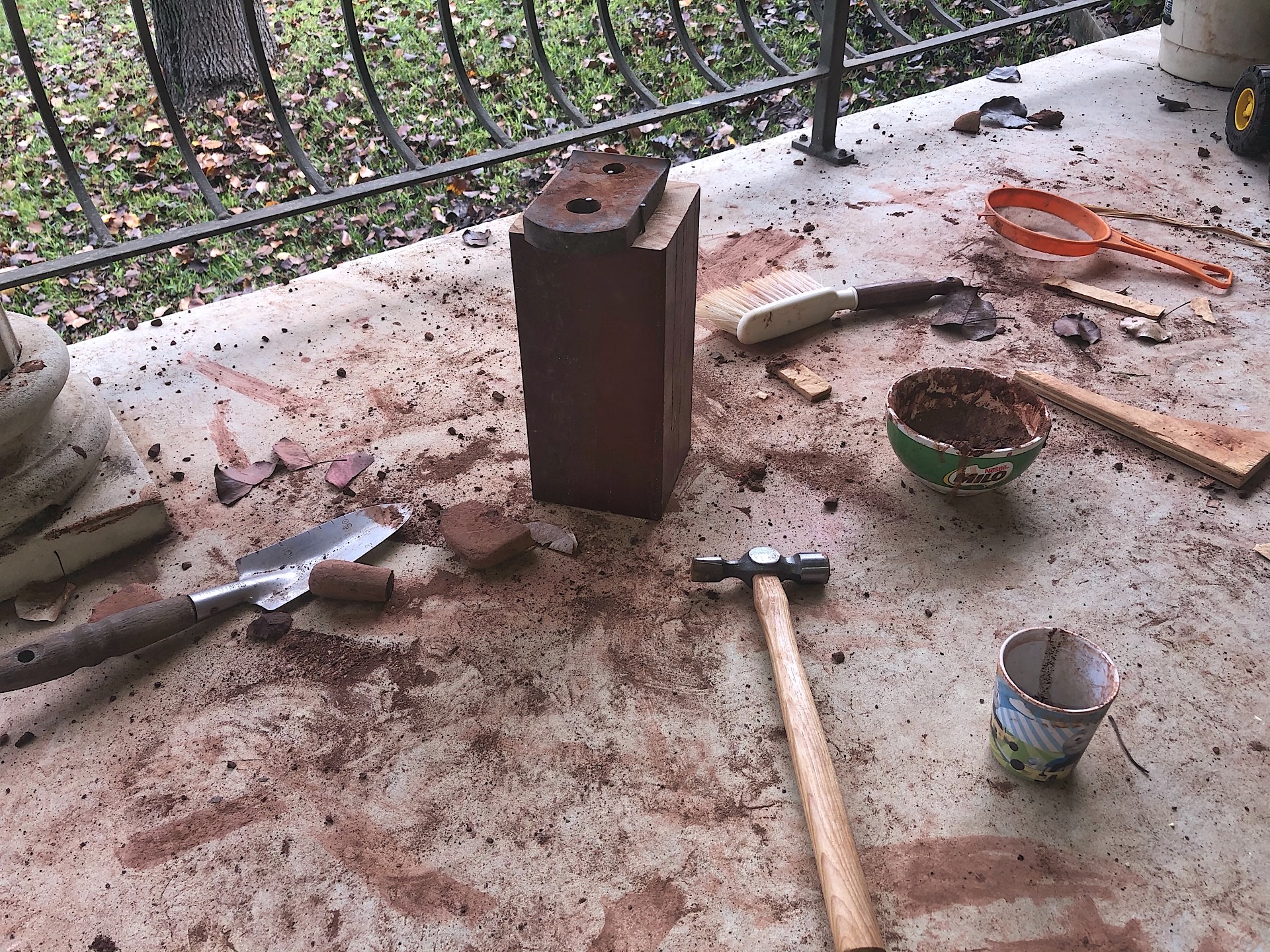 He's been making a real mess on the balcony but that's way better than him spending too much time on the TV or the console.

After a week or so, I thought maybe I should build him a proper workbench with the steel plate mounted on it so he can organise his stuff and he won't need to sit down on the floor bending his back.

So I went in the garage and picked some pallet wood and offcuts and started the work. Lacking of wood, I started to dismantle some old unused project and San helped me removed the screws that held them together. We started with a hand screwdriver but it was too tight for him so I thought I would introduce him to his first power tool, the drill. 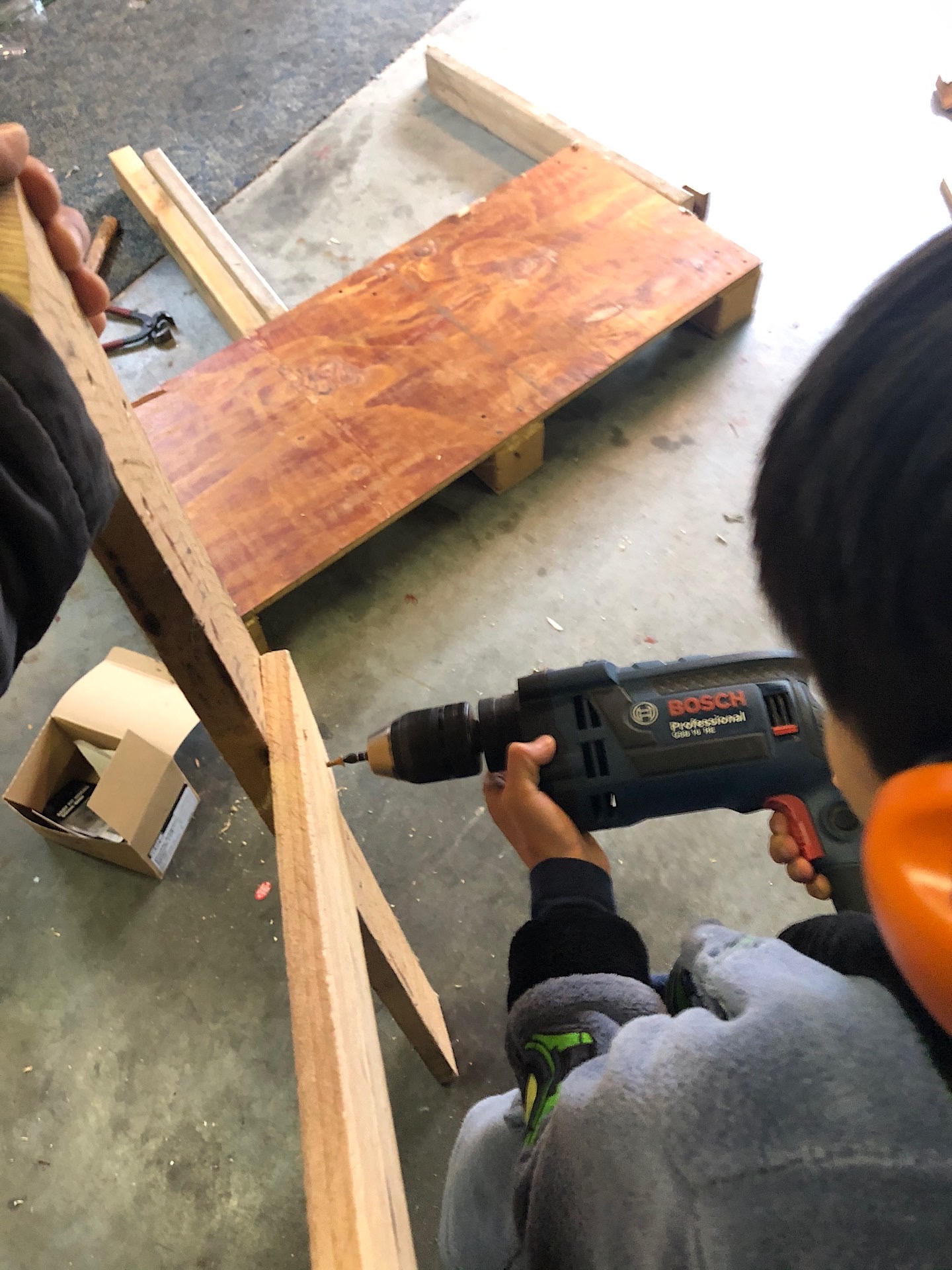 He quickly learned how to hold the drill and discovered that angle and pressure is important. 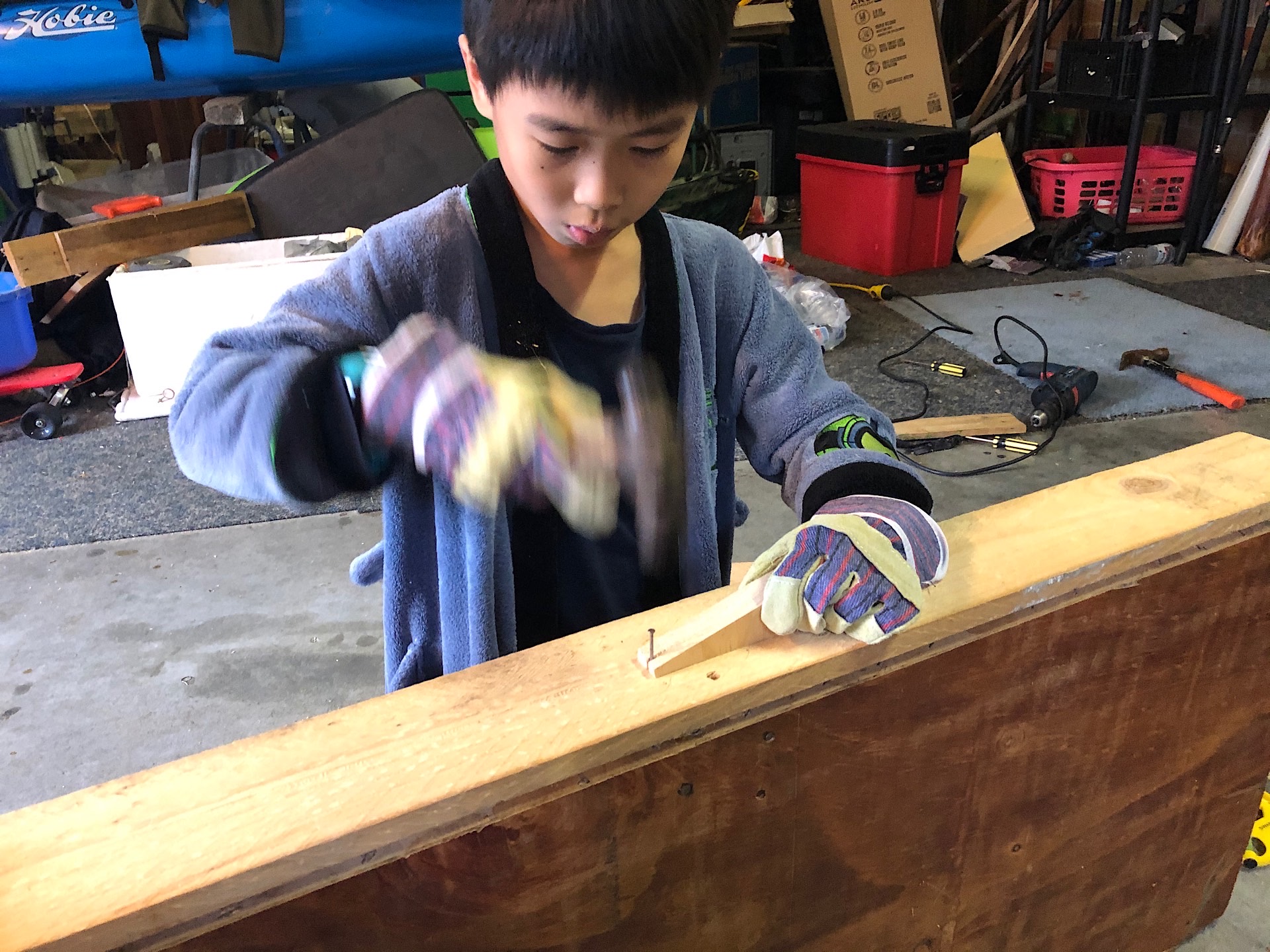 He then helped me hammering nail onto some wooden board around the wooden pallet. I showed him how to make a simple nail hammering jig that will not only help him nail straighter but will also protect his fingers from the hammer blows. 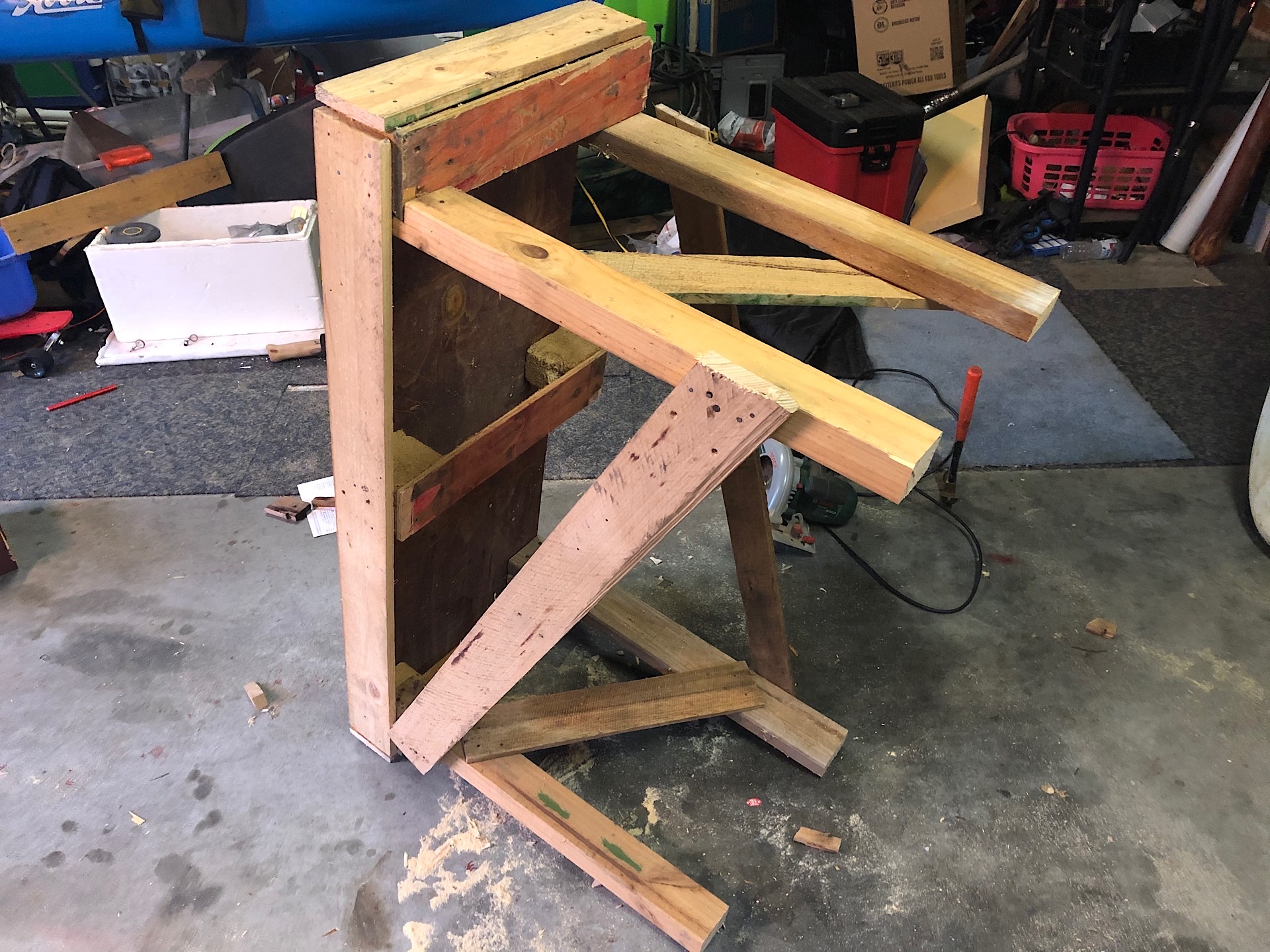 After the four legs made, we tested the workbench and of course it was super wobbly. So we started to nail in some braces to reinforce and stabilise the legs and the finished results was super stable. We also adjusted the length of the legs to make sure the top is at his waist level, I did measure the wood before nailing but I forgot to take into consideration the thickness of the pallet. 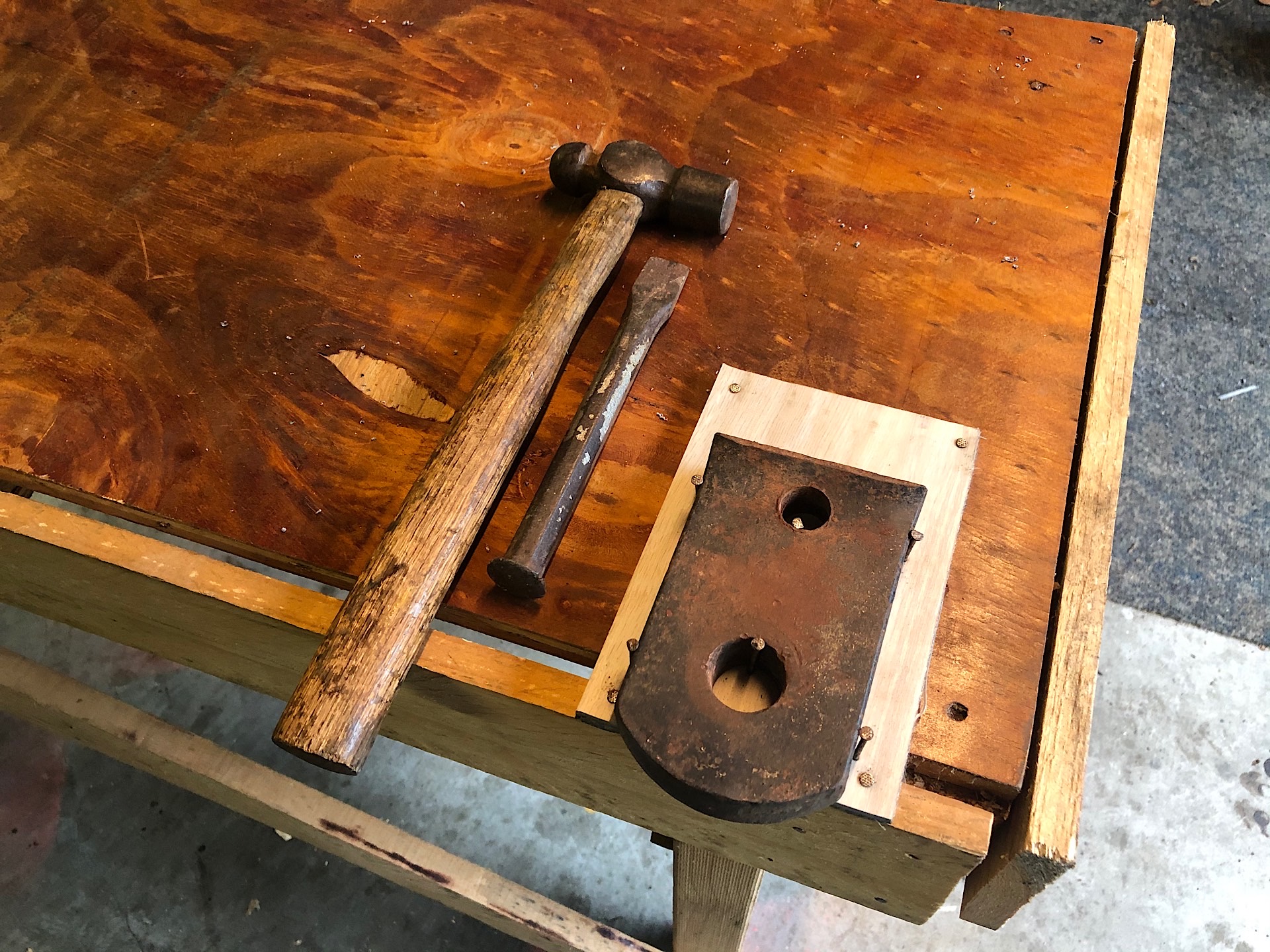 Now it's time to remove the steel plate from his previous anvil and install it on the workbench at the corner right above one of the legs. I added some offcuts of vinyl boards to dampen the sound. 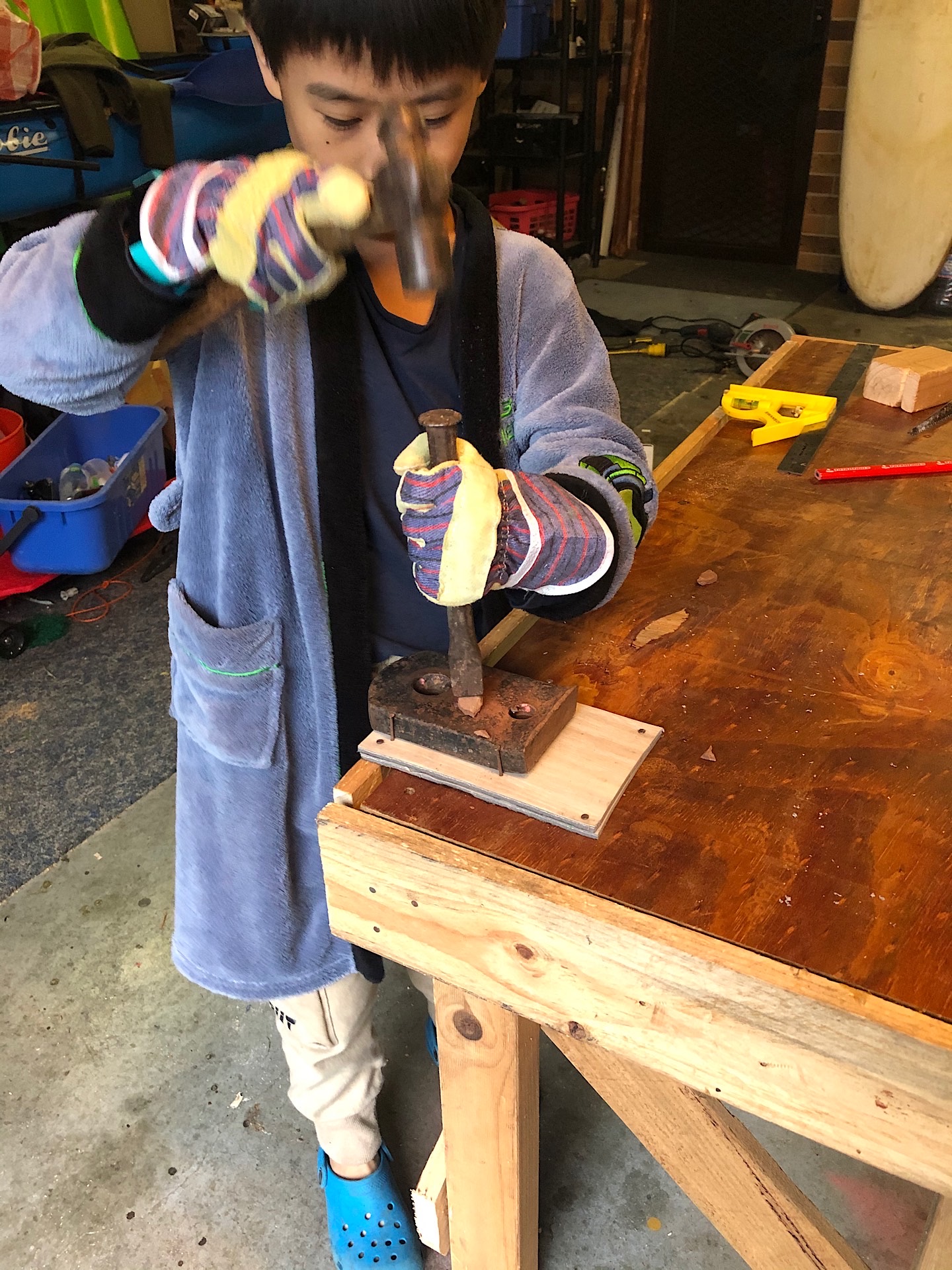 Time to test if everything works and San is playing with an old coal chisel and tried to break a little stone with it. 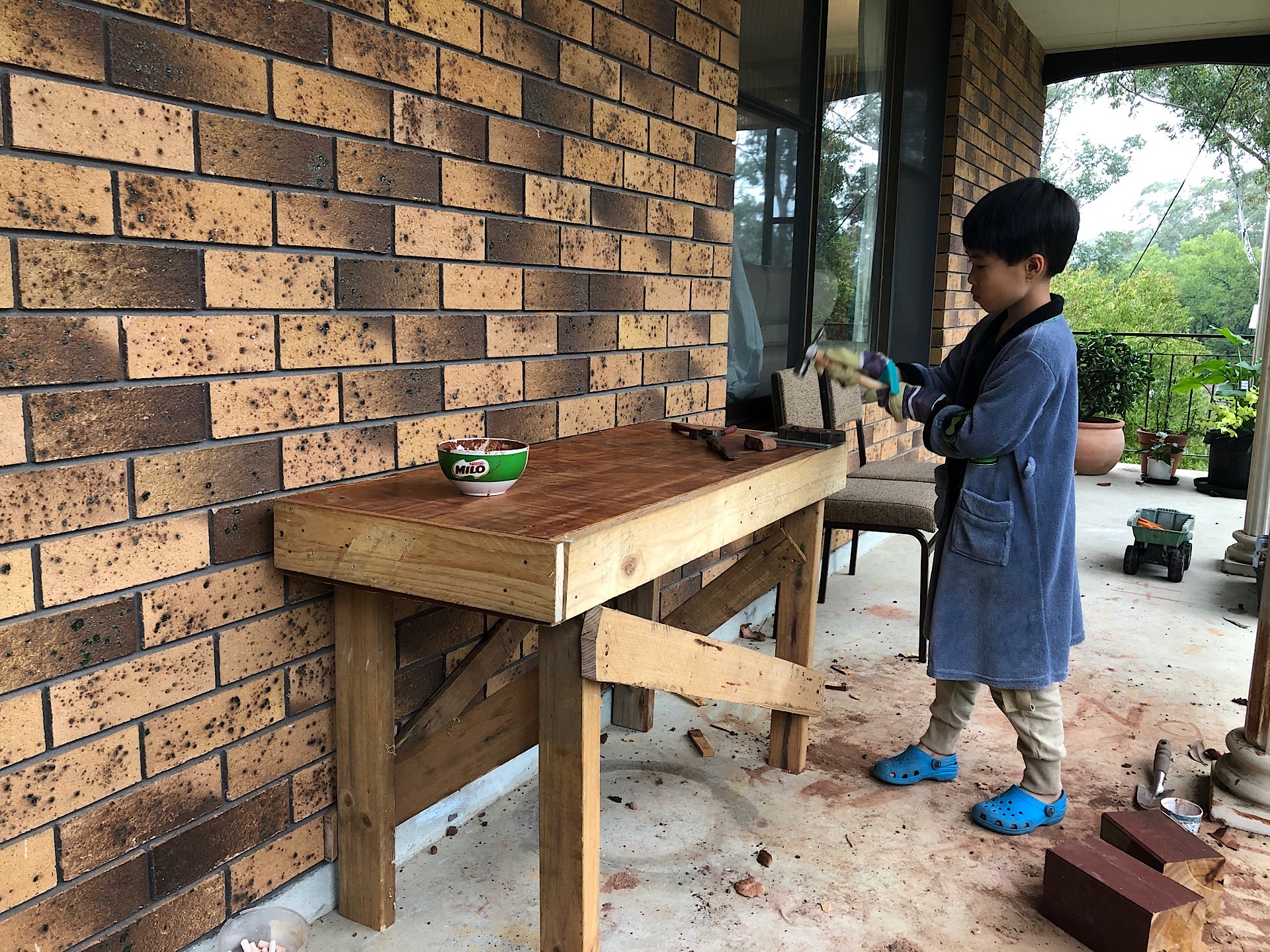 The workbench is now ready and installed on the balcony.

I'm also a Hive Witness, I have been helping some communities and contributing to the Condenser (the software that powers this blogging platform). Support me by voting for my Witness

It is good to put your child’s creative skills on board. For a 9 years child, it seems very wonderful to do such small projects. And off-course, it strengthens the father son relationship.

Yes, little projects together like that makes better father and son bonding. We were lucky several years ago to also have grandpa involved.

And he's enjoying it which is awesome

So wonderful he has his own work bench and prefers to be outside doing things. :))

Just need to find something he can easily do and that would keep him busy and away from screens.

Very good post about teaching kids. 😊
I'm seven years old, and I just learned how to use a hammer and nails.
I'm cross posting in the Kidz Community

That's great! You can do a lot of things with a hammer and nails.

Mess is awesome, means you're having fun right ;D

Okay maybe it's less awesome to clean up

Look at him go, he's going to be fully pro in no time!

lol. Luckily this mess was easy to clean, just broom the dust off the balcony and it was "clean enough".

This is great! Congratulations, I do believe it is very useful to teach kids basic skills from an early age!

Agreed. Even if it's just some basic exposure, it will remain with them until they grow up.

All of these, literally any useful tool skill will eventually come in handy. I do think weekly that my wife goes "How did you know how to do this?" lol

That's right and and when learning to use one tool, you also acquire skills for using another tool (safety, posture etc...). And best way to know how to do something is starting doing it and learn from mistakes.

He's very lucky to have a good mentor. I only got to learn simple woodwork in school at 15 years old.

I do wish schools do teach stuffs like this to the kids even if it's one special occasion a year.

Wow! This nine years old is quite incredible! I still don’t know how to use my power drill! It’s still in the box! LoL

You should have tutorials on wood work too. I had wanted to be a carpenter as a kid, but no encouragement from my parents!

Nice table for the kid!!
Cheers.

:-D
Take it out of the box and go make some holes in a piece of wood :-D

Thank you for the encouragement! I have to find a piece of wood first!! LoL

You are lucky to have a good son, looks he is so smart and handsome also.

This is great! My dad started teaching me handy work when i was younger and I don't regret it one bit!

Cool !! As a child learning to develop new skills. Congratulations to the teacher and the student.

Congratulations on having a great guy. Hope all the best will come to the boy in the future

oLY SHIT, that boy is a crack I think he knows more than me about carpentry hahah

Good Job! I remember my self when I was 6 years old... I am not an ordinary kid! LOL

Wow, great memory. I do remember myself when kid too but not everything, more like some events.

Awesome Dad, and what a beautiful place. Too many kids grow up not experiencing real play.

We're lucky to live in suburban, almost country side in this area, so we can do different things it wouldn't be easy to do in the city.

Can you make cat houses?
Most of the time I prefer a box, or sitting on someone's keyboard, but I think I would love a cat house, not that I would use it, just would like someone to make it for me.

My son loves cats, maybe he can build one for you

Definitely, sharing a craft with your child is preferable to sitting watching television. It is an experience that your child will remember for a lifetime and will tell your future grandchildren.

Thank you for sharing your experiences, receive a brotherly hug, as it is done in my country, from a distance.

Good job Daddy and son. Great stuff doing things with your son. When he is older he will never forgot what his father did with him and taught him.
This are the things that have eternity value.