dalz (74)in Splinterlands • 7 months ago

Splinterlands had a few updates in August like the new Dice cards edition and more on the way! Let’s see how the numbers for the game are. 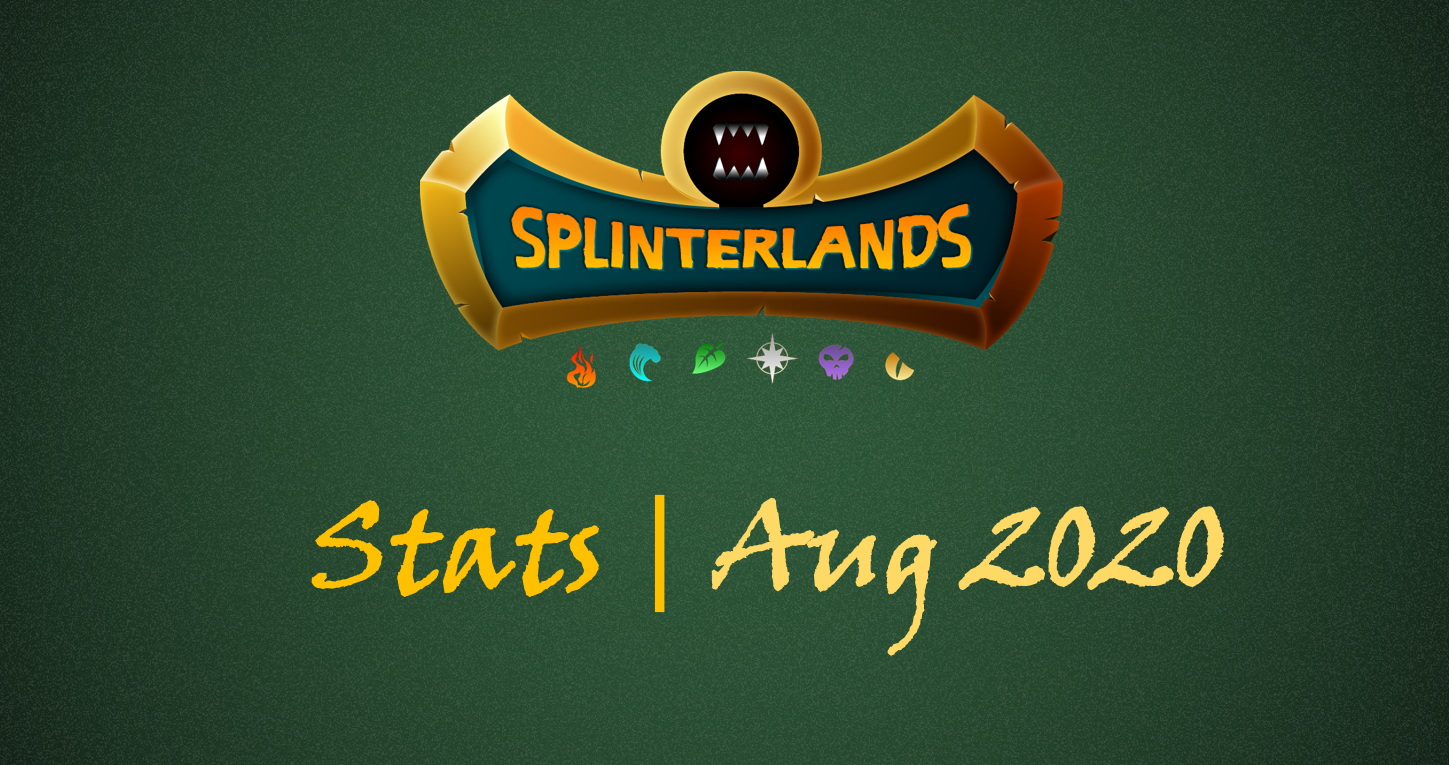 All the data presented is collected from the Hive Blockchain.
The following topics will be covered:

Here is the chart of the daily numbers of games played for the last year. 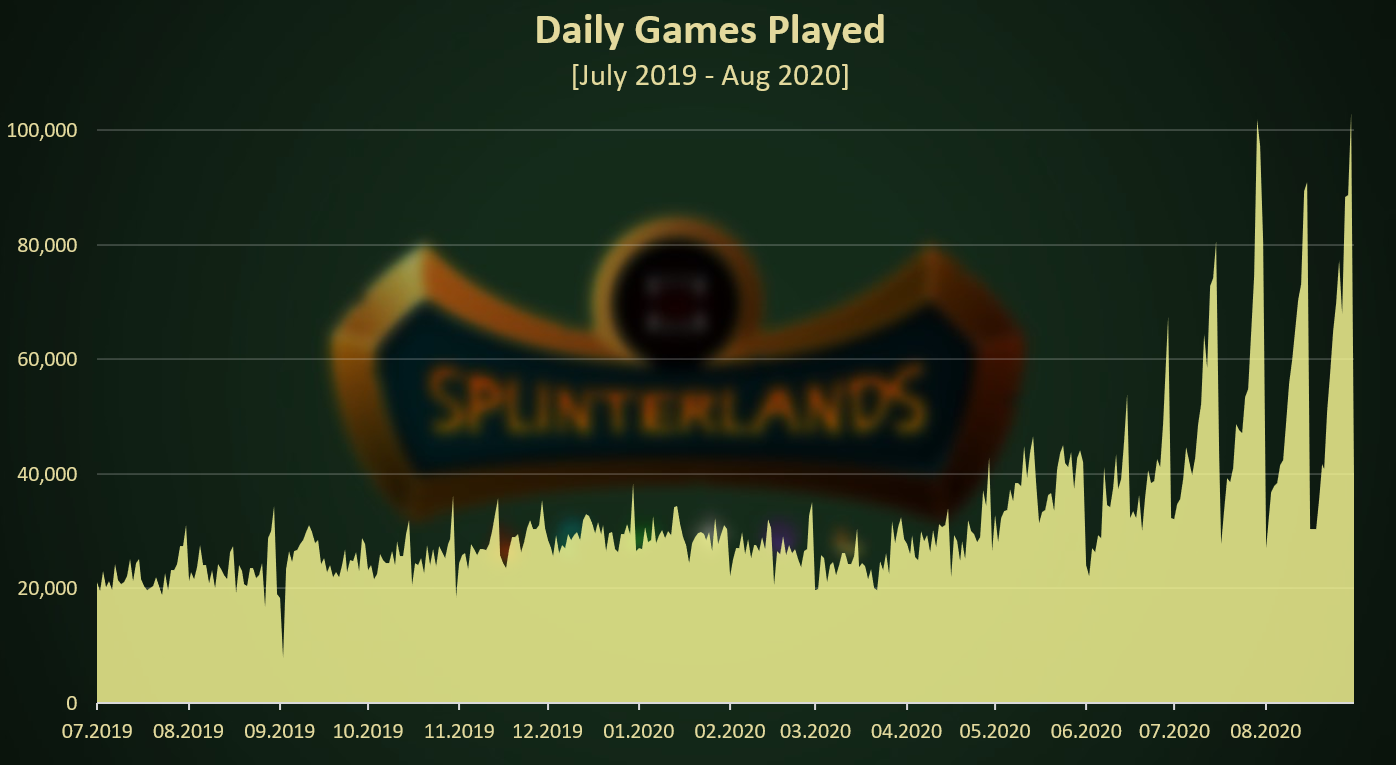 This is quite an increase in the numbers. Its not a usual one. I would like for it to be because of new players and adoption, but I think the main reason is bots. I guess we have more bots now. 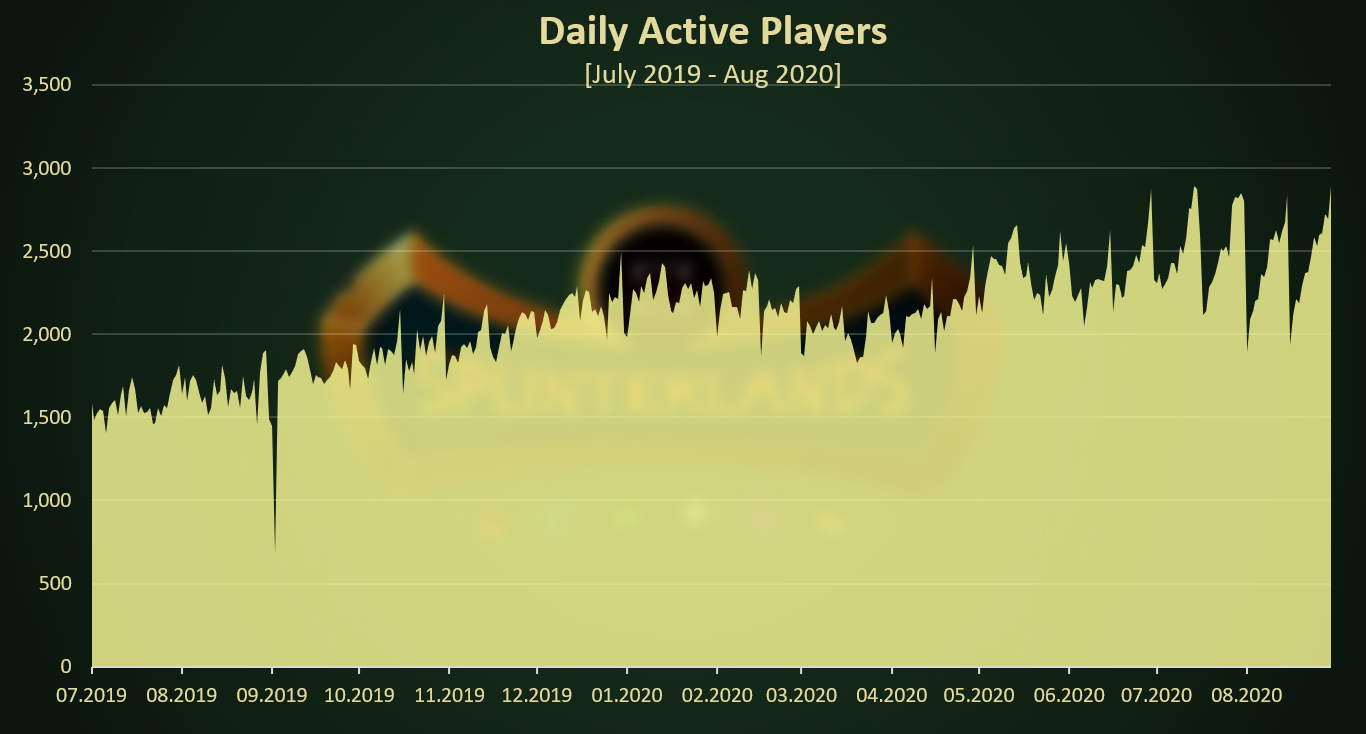 Next, the chart on the monthly active players. 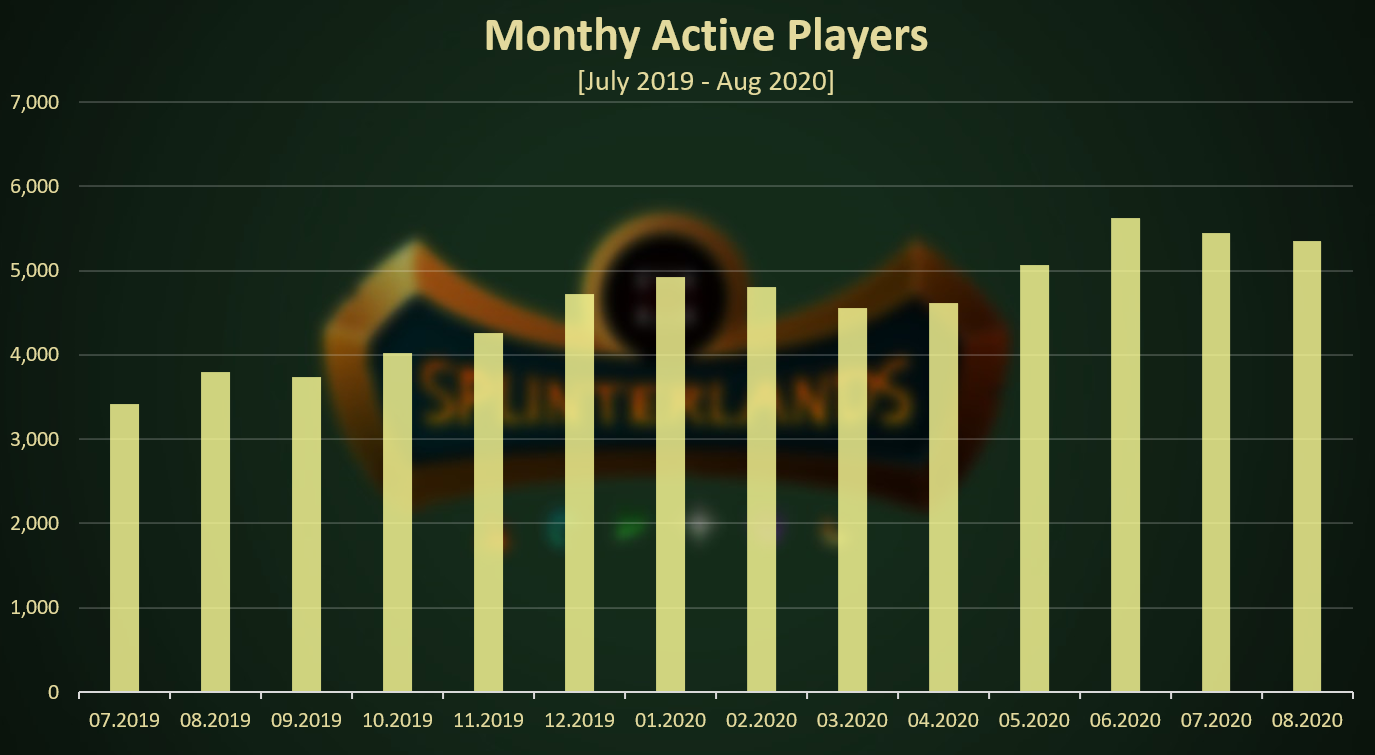 The number of monthly active users have grown from 3000 to a 5000 in the last year. August has more than 5k active accounts, but it has a small drop from July.

Above we have seen the number of active players. Here is the chart on unique players that have played at least one game. 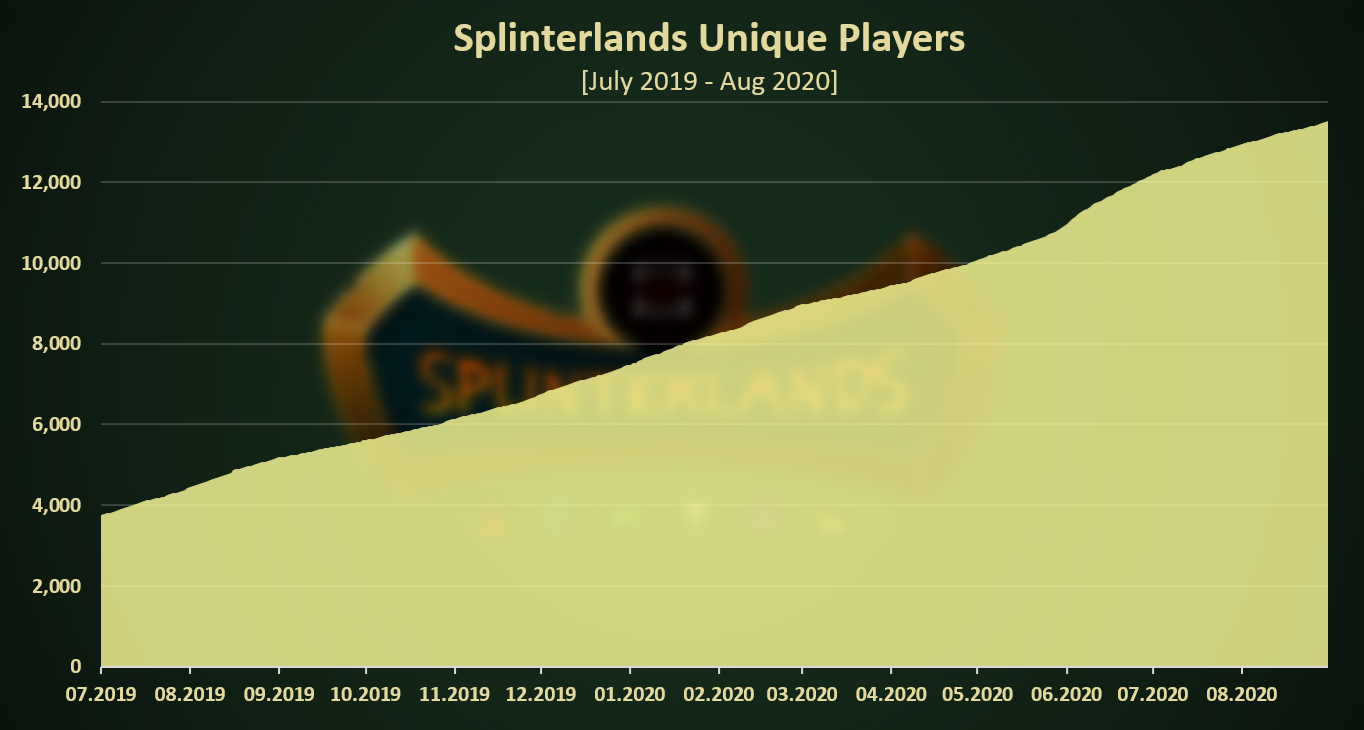 A nice and steady growth here. Note that this is data from May 2019, previous unique players are not taken into consideration. Starting with around 2k and growing all the way to more than 13k unique players in August 2020.

The monthly chart for new unique players looks like this. 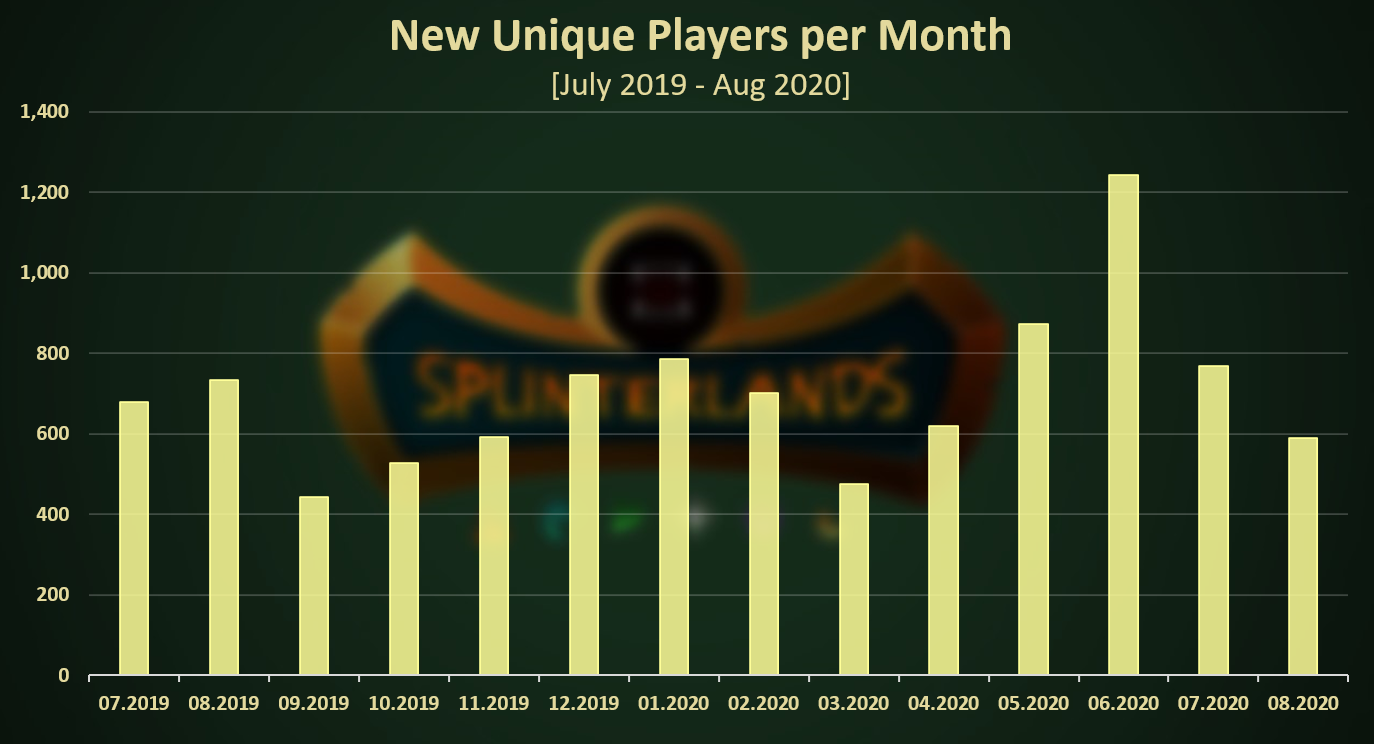 Almost 600 new accounts playing for the first time in August 2020. These are new accounts that become active.

Here are the new Hive accounts created by Splinterlands. 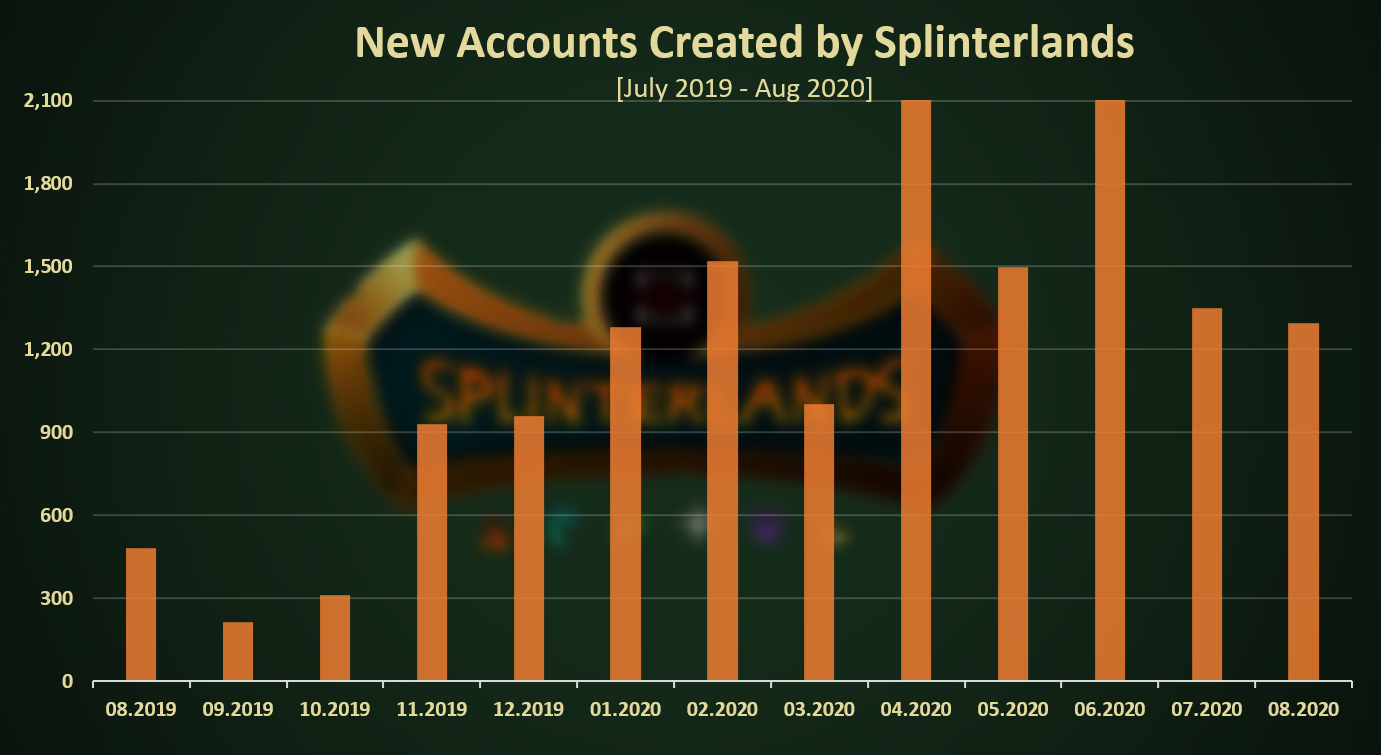 Around 1300 new Hive accounts were created by Splinterlands in August 2020. A drop from the record high in June.

If we plot the two charts from above, new unique players VS accounts created we got this. 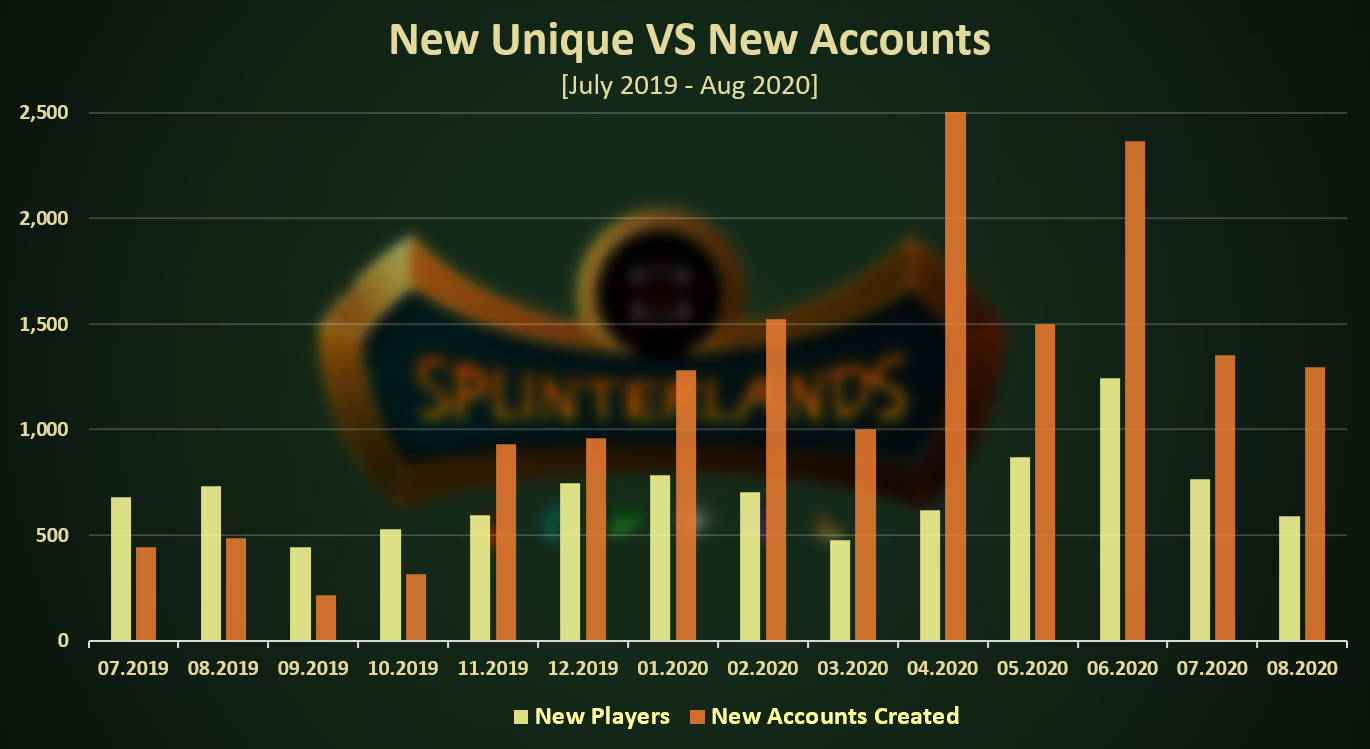 In June 2019 the number of new players trying the game is actually bigger than the accounts created by Splinterlands. This means at the time the new players were coming from the accounts that already existed. In the last months, the number of new accounts created by Splinterlands is bigger that the new unique players, meaning they are getting players outside the already existing ones on the blockchain.

Another interesting metric is DEC burned. DEC is burned when buying potions, orbs, skins and guilds upgrade.
The new DICE edition is exclusive bought with DEC as well and it is burnt.

Here is the chart for the all time DEC burned vs created. 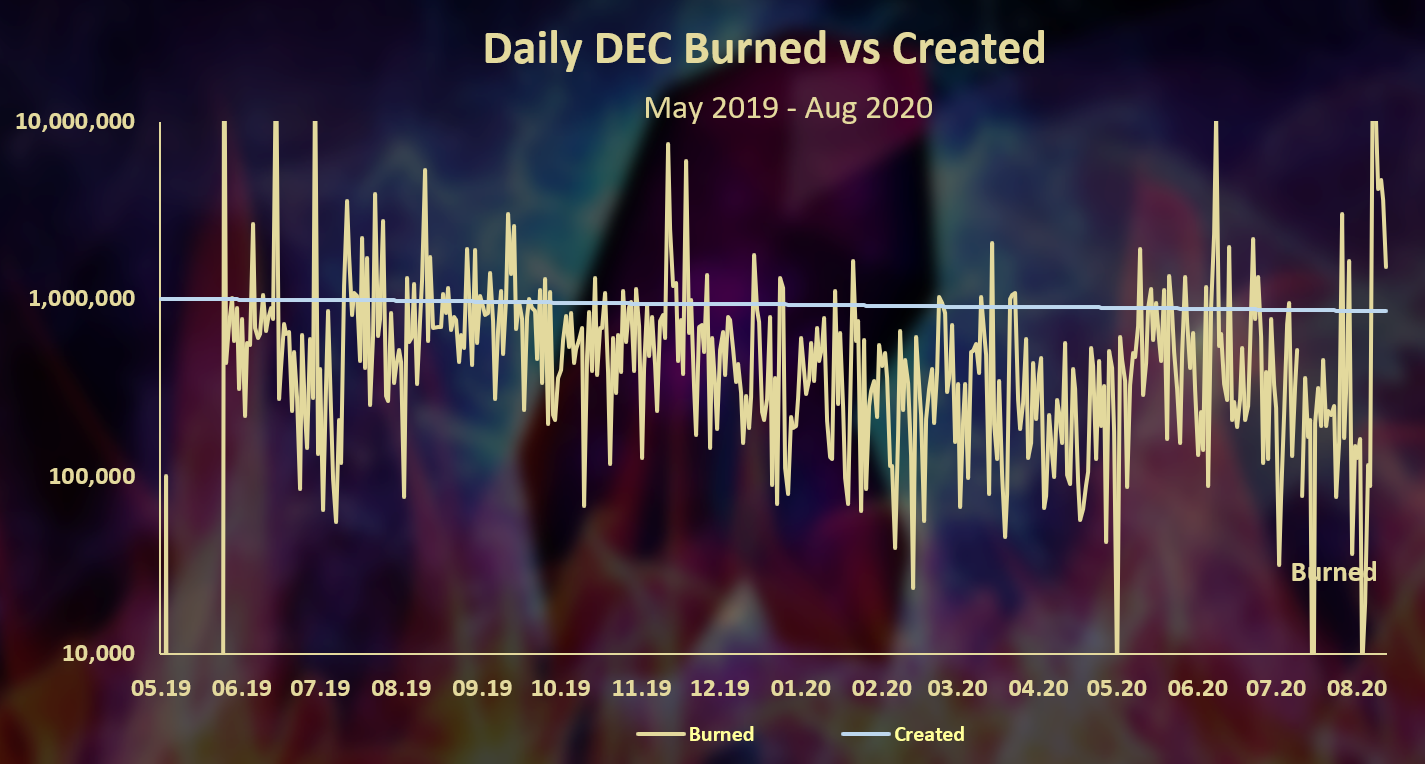 Note the chart is on a logarithmic scale.

We can notice a big spike in August. On august 26th just after the DICE launch, there is 42M DEC burnt, the next day 14M. This is a massive increase in the amount of DEC burnt from the 400k average per day in the previous period.

Obviously, the DICE launch had an effect 😊.

What about the DEC price?
Here is the chart on all time DEC price in dollars [$]. 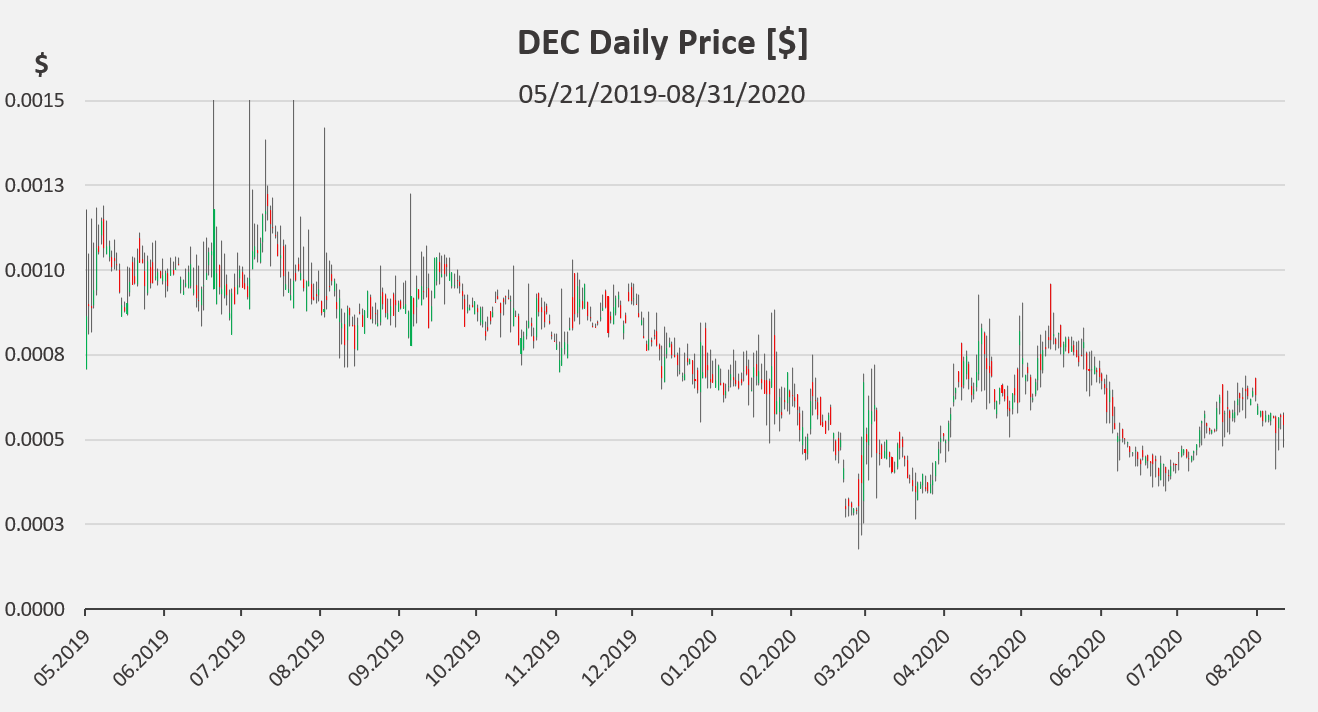 The chart for August 2020, for better visibility. 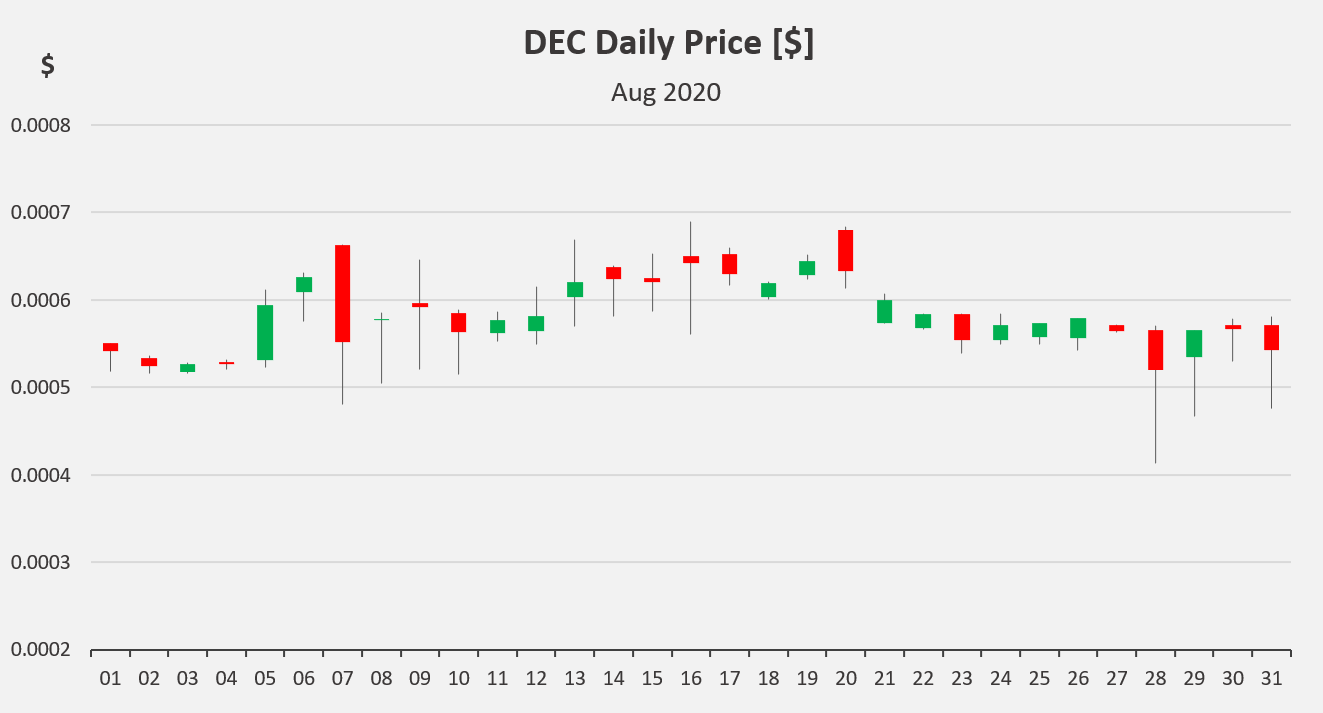 Seeing all the other data going up, but just the price down, it might be a good moment for buying some 😊.

Thx for that price chart. I went and made a green candle. Bought a million DEC.
Waiting for them to finally start listing DEC.
If LEO did it, so can Splinterlands.

I would like to see them at some point unppeg it, especially because in time players are making less and less DEC.
I remember when I was doing 150-200 dec per battle, now I'm in the range 30 to 50.

It used to be pegged very loosely but i dont think it is any more. You cant really peg DEC via the credit currency.
Demand can still skyrocket the price.

You can get 2000 DEC for $0.96. Its not really pegged. DEC is undervalued even based on the arbitrary peg and it can easily go sky high, slowing down pack purchases and increasing card market activity.

Yes its lower than that, but it has upper limit so to speak.

DEC is not pegged to dollar for a while. In the current game mechanics it is hard to peg it.

That is in Hive-Engine market. So DEC is detached by 35%.

While it's original intent was to keep it pegged, still is. However since it trades in the open market it is detached from its peg for a long time.

I am surprised a data guy like you is unaware of this! :)

:)
I'm very aware.
Its almost always lower than its peg. But it has an upper limit so to speak.
The max that I put on the end of the comment.

I would like to see a DEC price higher than 0.001 one day, so I can buy a pack with 1000 DEC.
In theory this should happen with time. DEC inflation goes down each month. As more players fight for DEC, the value of the token should go up.

No need to put price on the packs in DEC. Only $.

Of course! I was seriously surprised... but now I understand. Trouble is there is still not enough things out there to spend DEC on. So people get DEC from the game and they sell it. Adding to the inflation pressure.