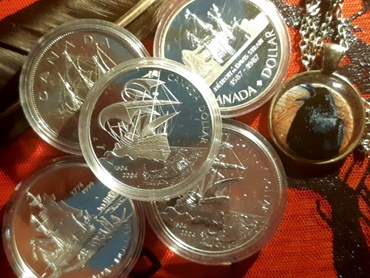 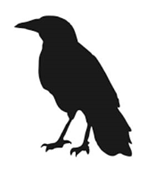 Three objectives and two ships left France, Le Don de Dieu,“The Gift of God” and the “Good Renown” Pierre Dugua de Mons sold his property to finance this expedition to establish a base in New France, also called Acadia. Henry IV of France bestowed upon Pierre Du Gua de Mons the title of Vice Admiral and first Lieutenant of Arcadia and was granted a monopoly of the lucrative fur trade. Upon his shoulders Henry IV commissioned Dugua De Mons the responsibility to Colonize Arcadia, Christianize and secure exclusive trade with it’s inhabitants and possibly find the passage to the East Orient. 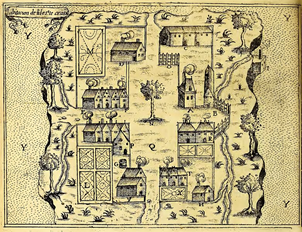 W1.
The buildings of St. Croix Island by Samuel Champlain 1613 under Public Domain, a layout of the first 1604 French settlement on Saint Croix as documented by Samuel de Champlain before it was dismantled and moved the following year to the better location at Port Royal. 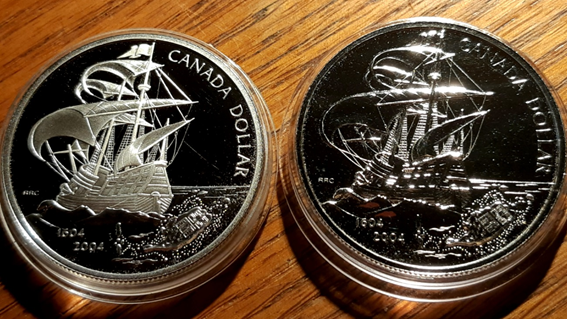 The first year proved difficult with the harsh North American Winter and Scurvy inflicting casualties among the settlers. In 1605 the colony was moved across the Bay of Fundy to a place called Port Royal, today it is called Annapolis Royal, Nova Scotia. While the Fur trade languished and losses mounted due to illegal trade by Interlopers and smugglers (Arrrh! Privateers I say), the Port Royal Colony grew despite difficulties becoming the French cultural center of Acadia until the British destroyed it 1613 as the same region was both claimed and contested by England and France. 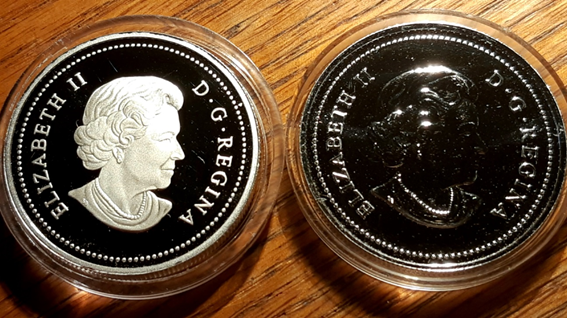 There is very little information of the ships other than the names of two principal ships; the other three ships and ship types remain a mystery outside the scope of this article. Likely small merchant class Caravel/Ketch, I always like to know the ship statistics like size, class, burden, crew size, and of course armament.

While Champlain continued exploring, mapping the Atlantic coast and the Great lakes Du Gua De Mons eventually was forced to return to France to protect his company business and leaving his college Samuel de Champlain to carry on the exploration and charting of New France. 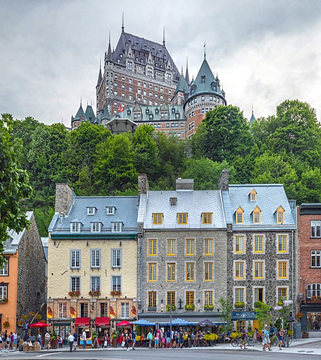 W2
In July 2nd 1608 Champlain with three ships including Le Don de Dieu arrives to the location today known as Vieux, Quebec and founded Quebec City of New France. Today the ship is remembered in Quebec City’s Motto: Don de Dieu feray valoir, “I shall put God’s gift to good use.”
Champlain chose the location of Fort Saint Louis, a strategically defensible prominence atop of what is known as the Upper Town, a nearby geographical high point overlooking the cape. That position was later tested by a British Invasion force led by General James Wolf in 1759. 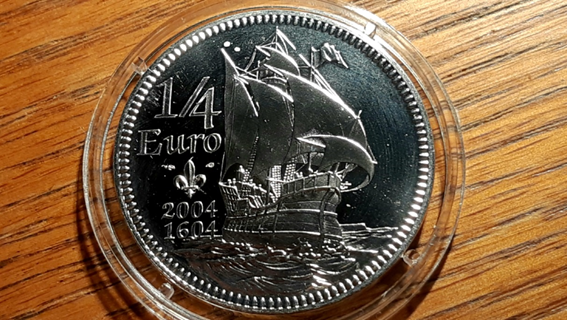 In 1620 Champlain was made Governor of New France but returned to France when the lands were ceded in 1629 to England. In 1633 upon his reinstatement as Lieutenant Champlain returned to Quebec following a Peace treaty with England serving only two years before passing away.

Even though Dugua de Mons’ Fur Trade never flourished as expected, the importance of Champlain’s work having established these settlements were important in maintaining the French presence in the New world and as an integral part of Canada. 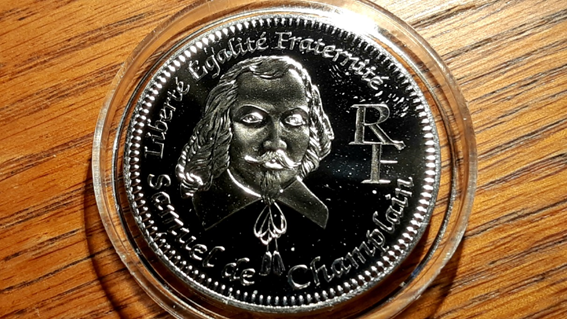 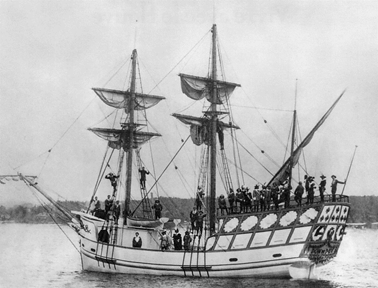 W3
The replica of Le Don de Dieu was featured at the 300th Anniversary of the founding of Quebec on July 23rd 1908.
Replica Ship Stats:

My Thoughts on these coins

The Canadian version is beautifully done going for the 3/4s stern view of the ship, the inset St Croix inset map locating the very first French settlement. I also see some corroboration and collaboration the RCM with the French Mint as their coin presented the same ship as a 3/4s bow view of the ship. These would have made an interesting paired presentation set.

What a tiny ship! Could barely fit twenty-five crew and where would my hot tub and treasure be stowed? Guns, no guns? Sure these are fine additions to the Silver ships fleet but outfitting the real ships as Pirate ships can be a problem. Pierre de Mons could have spend a bit more silver for bigger ships, then we can deal with his Interloper issues easy peasy!

I hope you enjoyed this very special feature

And thank you for stopping by my Pirate Blog today.

The #piratesunday tag is the scurvy scheme of Captain @stokjockey for #silvergoldstackers and #sgs-community pirates to proudly showcase their shiny booty and plunder for all to see. Landlubbers arrrh…welcomed to participate and be a Pirate at heart so open yer treasure chests an’ show us what booty yea got! 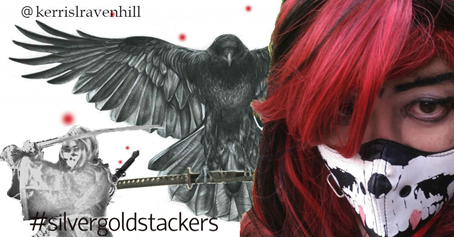 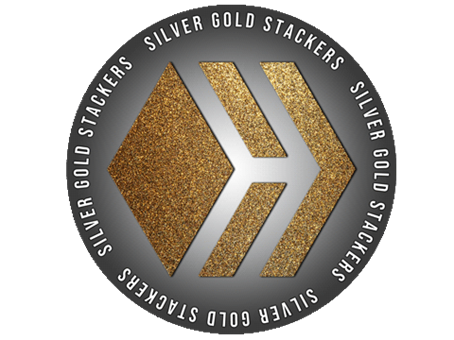 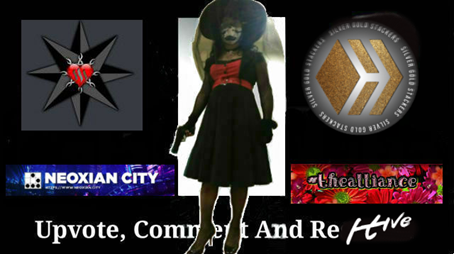 Wow... That is a really Beautiful shiny 😍 I love ships and Great details.
Your stack really is impressive sweet sis 😊
Thank you for sharing and I love the history. Loved it.
Have a wonderful evening and much love 🤗❤️💞

I think its the way I take the pictures nowadays. Composition is important so I wanted to have the coins glisten in the light, with the coin resting on a wood background, and epic mood music playing in the background (Working that last feature). I'm glad you got to see these fine coins added to my silver fleet @saffisara
☠ ⚓ ⛵ 🌸 🌼

A little more than one year ago I posted an article about this same Canadian coin. Now I am ashamed because your article is so much more well written and so much more well photographed. Another deep research by you. Congrats!

Well @ronavel you were still a year ahead of me.
And, I could have an undiagnosed obsessive compulsive disorder of collecting relevant details into one place. Otherwise its just putting in the effort spread over the two weeks as I meditated on the coins.
It's always difficult to photograph BU coins in any light, and I took lots to get the best one.
Thanks for the comment.

Love the Sailing Ship ‘Don de Dieu’, and the Ship ‘De Don de Diue’. True, very true... the Canadian version in the coins you show is beautifully done! Only 25 crew... reminds me of the movies about the Norse ships!
An EPIC show, my lovely sis @kerrislravenhill!
Have a wonderful days off, and Take care 🥰🌺🤙, lots of love💓💝 and a million and one Hugs and Kisses 🤗💕💋!
!tip

I found these coins to be more common and inexpensive than I thought. I couldn't find what the original issue price but I'm sure I got it below that. To add, there was far more Proofs out there than Brilliant Uncirculated versions too.
By the way, I do have a Norse Ship in my collection coming up so why not? Next #piratesunday with a little bit of a Norse accent.
Always, with d'amore mon soeur ☠ ⚓ ⛵ 💗 🌷 🎏 🌼

I have been getting these Canadian RCM products in the secondary market for much less than the original issued price. You wait long enough, the premium tends to shrink. You may still get some with the original case, COAs and coin docs but definitely cheaper without the extras and shipping cost.
Thanks for the comment @djohan

You are killing me with those coins.....

It must be the way I compose my coin pictures in a Stackitis triggering cues.

where would my hot tub and treasure be stowed? Guns, no guns?

I can forget space for the shuffleboard.