#piratesunday : The 1952 South Africa 5 Shilling: The Drommedaris and the founding of Cape Town 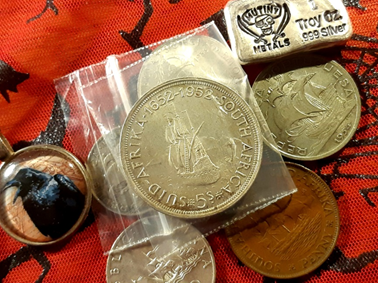 In my last article, I mentioned that the English First Fleet ships lead by Captain Arthur Phillips made one last stop over to Cape Town to stock up on farm animals on the last leg of the voyage to New South Wales eventually leading to the founding of Australia.

About 285 Years earlier in 1503 the Portuguese landed there but were turned away several years later as relations with local herdsmen became hostile. That didn’t deter other ships that used Table Bay’s natural geography and resources as convenient anchorage for rest and resupply. 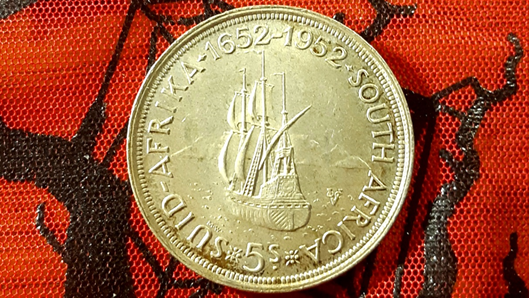 It wasn’t until about 1647 when The Haarlem, an earlier Dutch ship of the Dutch East India Company, ended up wrecked on the shores of Table Bay. While fifty eight of the crew were sent home Sixty two men stayed to recover as much of the cargo as possible. When the remaining crew returned back to Holland they reported favorably regarding the friendliness of the local Khoisan natives and the lush fertile soil most suitable for planting important crops like citrus fruits to prevent scurvy.

The long trade route from the Dutch Republic to the Dutch East Indies in Batavia took a toll on crew and passengers, and causalities were often high. The answer was obvious. 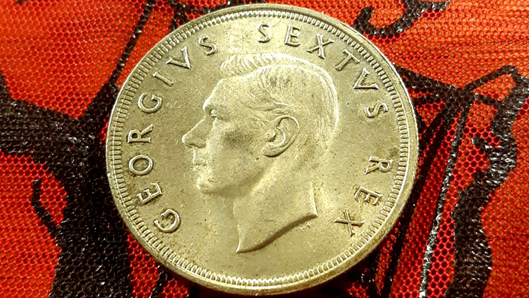 The Directors of the Dutch East India Company decided it would be prudent to establish an outpost serving as a refreshment way station for Dutch company ships en-route to and returning from Batava. A man by the name of Jan Van Riebeeck was contracted to oversee the establishment of this potentially valuable post.

And on April 6th, 1652 sailing aboard the Drommedaris Jan Van Riebeeck arrived with two other ships; De Goede Hoop and followed by The Rejiger arriving the next day. The Drommedaris continued it’s journey and departed from the Cape on 25 May 1652, arriving in Batavia on 22 July 1652. 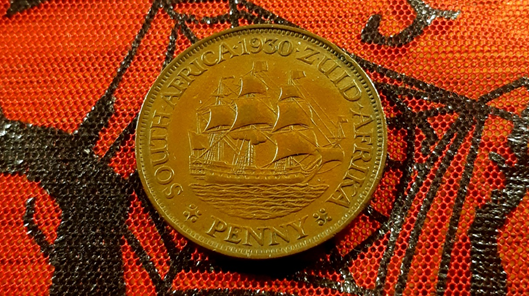 Van Riebeeck was instructed to just establish the post with clear intentions not to build permanent colony and that the local Khoisan inhabitants should be treated with respect.

The Fort of Good Hope was built and its only purpose is to be a Refreshment Station providing fresh water, food and aid for Company ships. However in its first year, unfamiliarity with the seasonal weather of the region proved disastrous as heavy rains that winter washed away their simple shelters and crops leading to nineteen deaths. 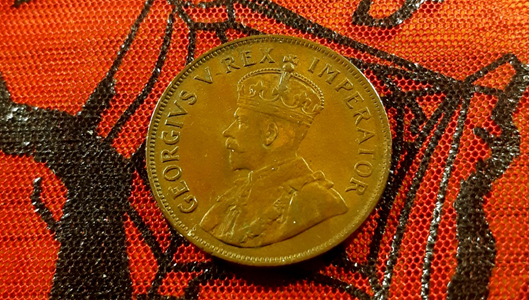 The completed fort provided an important role as the Dutch eventually went to war against the English. This then marked the first permanent European settlement in the region. Eventually the Company made a decision to turn the outpost into a colony by allowing the sailors and soldiers working for the company to settle in and around the Fort with their families working their own parcel of land. 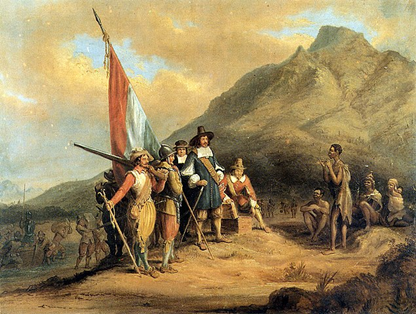 Some details on the Drommedaris; a Dutch Jaght built in 1645 by Amsterdam Yards with a 560 ton burden. 40 meters long including the bowsprit. The Term Jaght is precursor to the current usage, Yacht. Meaning: "a light, fast-sailing ship," small fast ship designed to pursue smugglers, pirates and criminals.

There was a full sized Replica built of the Drommedaris that sailed Table Bay Harbor in 1952 in celebrating the 300 year anniversary during the Van Riebeeck festival in 1952. Here’s a link of a lovely model of The Drommedaris since every picture available is copyrighted.

Established in 1602 The Dutch East India Company was also known as The Vereenigde Oostindische Compagnie (VOC) is a conglomeration of several prominent Dutch trading companies headquartered in Amsterdam.

Batavia was the Capital of the Dutch East Indies. It is now Jakarta, Indonesia.

My Thoughts on the Coin

From looking at past articles you can tell I love coins with sailing ships. The silver 1952 South Africa Five Shilling coin is a fine addition to the Silver fleet. Rather than a Broadside profile typical with most Ship coins the Drommedaris is presented from the Stern ¾ view as if viewing from the deck of the Rejiger prior to landfall.

As a typical business strike both the subject and background has a consistent matte finish that resists fingerprints from handling but an issue when it comes to photography.

Hmmm, I know I saw this design somewhere before, the 5 Shilling coin…. Ah yes!

Nope… close… I can see where @thedamus got his Inspiration! 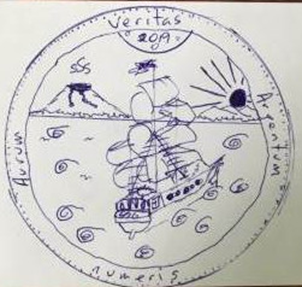 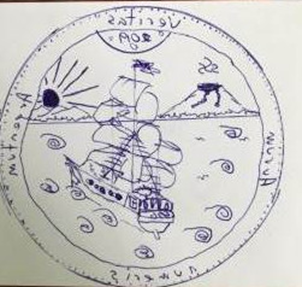 One of the Finest entries in the 2019 Steem Silver Round competition
I recalled voting this as a sentimental favorite.
After all we’re Silver Stacking Pirates! 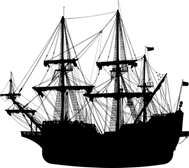 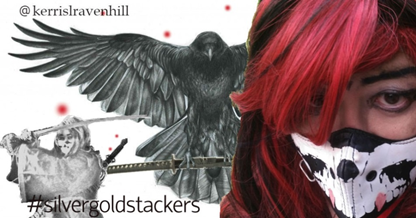 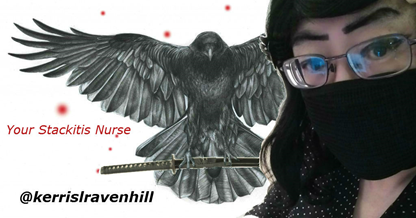 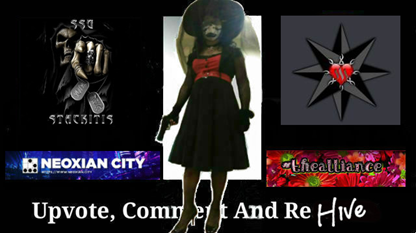 Very Nice, you are holding up and fortifying your high standards of content creation!

Knowledge and History are in themselves a great treasure to possess.... Arrrh!

Your love for coins with sailing ships and pirate-themed silver your unwavering focus to collect them defines you and your stack and sets you apart from the rest of us, my stacking sis! Your articles are educational and I, personally, have learned much about the history of the ship coins that you've been adding to your extensive collection because you always take the time to provide us information and background about them. I appreciate you and the time and effort you put into writing your articles. Thank you sis @kerrislravenhill. YOu are an inspiration to me.
Have a wonderful evening, my lovely and sweet stacking sister! Take care 🥰🌺🤙, lots of love and a million and one Hugs and Kisses 🤗💕💋!!
!tip

One of these days I'll do a full Pirate stack reveal as different from a Full Stack. How I present it is still in process like a Museum Curator having intimate knowledge of each piece he has carefully has displayed in his Museum. Too much to think about now.
Always, with love... 🌺 💝 🌹 💓 🌸

Another marvelous story!
I am also a fan of ships on coins and you just gave me an idea of publishing a series with all the coins I have that show ships on coins, dedicated to you.
I will do it as soon as this pandemic ends and I can access all my coins. Thank you for the idea.

That will so cool to see @ronaldoavelino
There are so many coins with Ships and Canada has a fair number of them too, not just the Bluenose. I still have a few Canadian ones yet to write about. I cold chose to write about the Ship itself, it's features and design, or the significance of the ship in history, or the Personalities/Captains ... or a combination thereof.
One I have mulling is the 2012 HMS Shannon and it's part in the war of 1812, with way too much information so I may condense things down to a fictionalized account and yet still true to the historical events.

Awesome information and great coin. That model looks unbelievable, that took many hours to make. Thanks for sharing

It's a great model. Not like the plastic models you glue and paint kits but one that faithful in quality and workmanship that can be a fine heirloom displayed at a home or office of anyone who has an deep appreciation of sailing ships. You are a craftsman @silverd510 and you can appreciate the knowledge, effort, skills and details in producing something beautiful and artistic.

I visited Cape Town twice and it is so strange hearing people talk Afrikaans which is old Dutch in fact. The wine estates are beautifull but life in the street is like in Chicago.

I never been there myself. I just know most of South Africa was from High school geography and the media. I believe I learned more about this country in the few days before this article that all my life. And most News coming out of this country over the last decade hardly seems good at all, in fact many facets of SA society are in serious decline.

You got voted by @curationkiwi thanks to Kerris L Ravenhill! This bot is managed by KiwiJuce3 and run by Rishi556, you can check both of them out there. To receive upvotes on your own posts, you need to join the Kiwi Co. Discord and go to the room named #CurationKiwi. Submit your post there using the command "!upvote (post link)" to receive upvotes on your post. CurationKiwi is currently supported by donations from users like you, so feel free to leave an upvote on our posts or comments to support us!
We have also recently added a new whitelist feature for those who would like to support CurationKiwi even more! If you would like to receive upvotes more than 2x greater than the normal upvote, all you need to do is delegate 50 SP to @CurationKiwi using this link.