EXODE releases into Alpha - A first look at some early cards 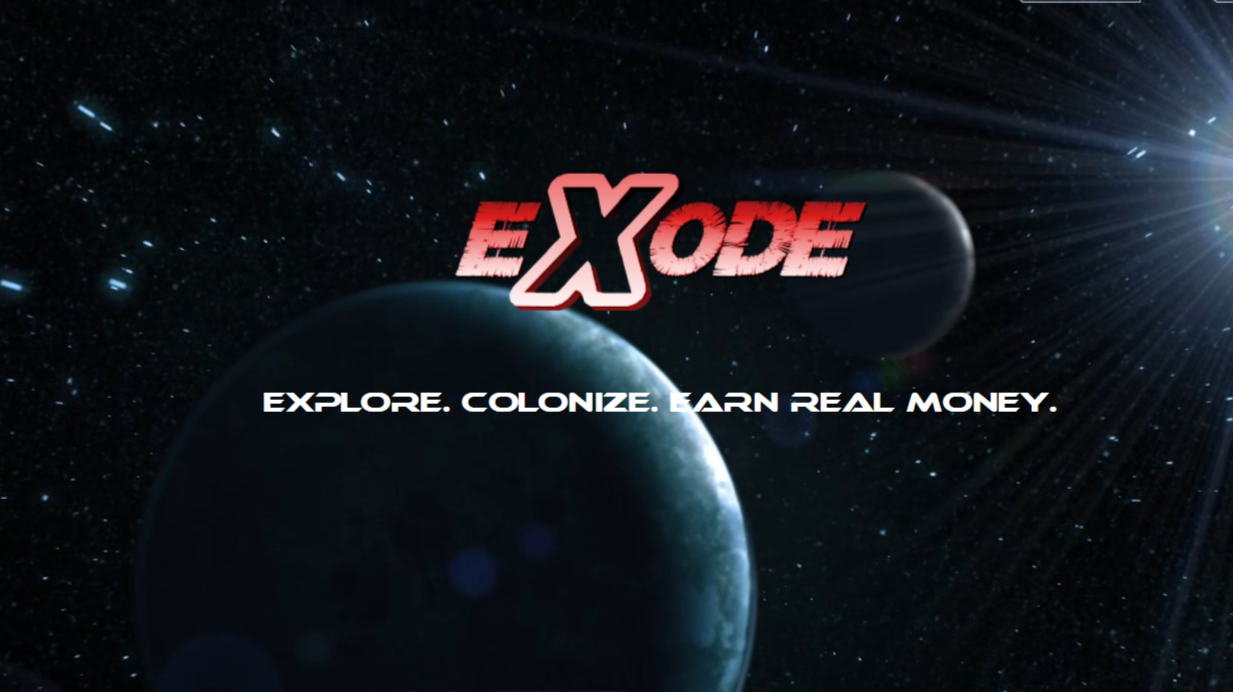 When I first stumbled across an article about EXODE some weeks ago I would have never guessed how much I'd fall for that game. There was nothing to be seen at all, only a game manifesto and a somewhat confusing description of what the game was going to look like. I was somewhat intrigued by what I've read there and slowly started to gather all information available. Earlier this week EXODE finally released a first playable Alpha client that was improved several times already. Personally, I'm all sold on the vision and I believe that EXODE has the potential to become the next Splinterlands.

As of now you can try the Alpha for free. Simply log in with your Hive account using Keychain and you're good to go. The Alpha itself is still in a very early stage and mostly there to give a glimpse at the games concepts and basic gameplay.

If you haven't heard of EXODE yet, it's a collectible card game space exploration colony management game... or something like that. The game takes place some centuries in the future. Mankind has colonized the stars and started spreading across the universe when one day an alien invasion obliterates almost every single human in a single day. It consists of two interwoven stages: A fast paced evacuation where you scramble to save your ship, crew and anything or anyone you can get a hold on before the aliens destroy everything and a more complex, longer lasting colonization stage. The special thing about EXODE is that you can enhance all parts of your experience by using collectible cards. Those cards can be ships, crew, weapons, robots and many more things. If you want to learn more about the game there are plenty of articles here on Hive and over on Publish0x. Today I want to focus on some of the cards that have been revealed so far and discuss what can be learned from them. 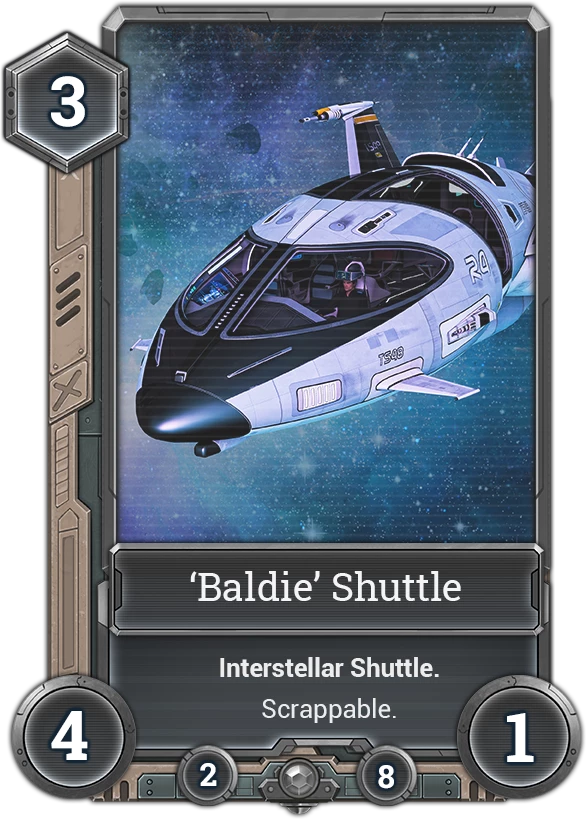 The first card is the 'Baldie Shuttle'. First of all I have to say that I really like the layout used here. It sports a very clean design, offers a lot of information at first glance and still has a lot of space to showcase it's artwork. So what can we see here? The 3 in the top left corner is the quality level of the card. This is a way to show how powerful a card is on average. The basic rule is "the higher, the better". A quality level of 3 is not exactly much, but that level can be increased by leveling the card. This is either done by simply using it several times or by combining several copies, just like in Splinterlands. The 4 and 1 in the lower corners represent the crew size and the equipment slot size. The smaller numbers are structure and stealth. Since there's no indication what number represents which information it's going to take a while to get used to it. Since I prefer a cleaner layout compared to overly complex symbols I'm fine with this decision. Interstellar Shuttle is probably the class of the card while "Scrappable" has to be a keyword. There's no information so far what scrappable means exactly. I could imagine that you can scrap your shuttle in order to regain some resources once you've founded your colony.

I really like the concept of a card driven strategy game. The choice of your ship dictates how your evacuation is going to play out. Bring a small stealthy ship and you'll have an easier time escaping from the aliens. At the same time you'll only have a very small crew at hand so getting everything done in time will be a problem. If you bring a huge ship you'll have an easier time loading all your cargo but at the same time you are sure to draw some attention - both from the aliens and from rival crews. If they follow through with the vision detailed in their game manifesto then there will be no perfect ship to go with. Every ship will come with it's up- and downsides, each offering different gameplay and obstacles. 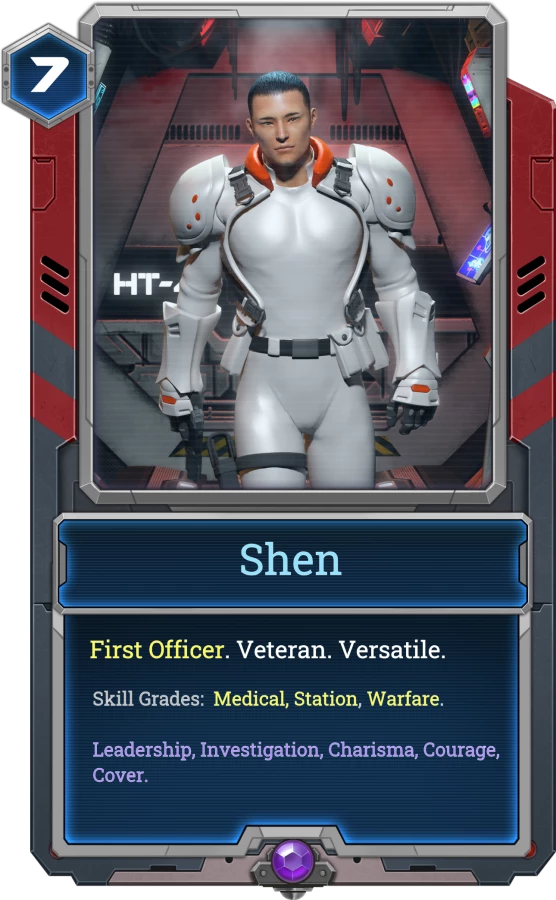 Shen is a different kind of card. He is a crew member or to be more specific, a ships first officer. All ships come with a default crew that is partly randomized when a new game is started. Each crew member can be replaced using a card like Shen. This allows for a lot of customization and replayability. Shen has a quality level of 7, so he's a lot more powerful than the Baldie Shuttle. This can also be seen by the purple circle at the bottom, identifying Shen as an epic card. The grey circle of the Baldie Shuttle probably means it's a common. Each crew member comes with several lines of information.

First Officer. Veteran. Versatile. means that he is used as a ships first officer. I assume that you can only use a single number 1 in any given evacuation. Veteran means as much as unique, so you can only run one copy of Shen. Versatile on the other hand indicates that Shen can be used with any crew. When you start a new game in EXODE you chose an origin. This origin dictates what kind of crew your ship has - military, scientists, civilians, criminals and so on. Since Shen is versatile he can work together with any given crew.

EXODE uses a wide array of different skills to show what a crew member is good at doing and what is best left to others. Shen shines in Medical, Station and Warfare. While some of his stats will be randomized every time he is used those skills are guaranteed to be among his best. Finally Leadership, Investigation, Charisma, Courage and Cover are the traits and abilities Shen has. They dictate which additional actions he can take and how successful he's going to be. While we don't know exactly what most of these perks do it already serves to showcase how complex of a game EXODE is going to be. If you want to make the perfect decision you'll have to take a lot of variables into account. 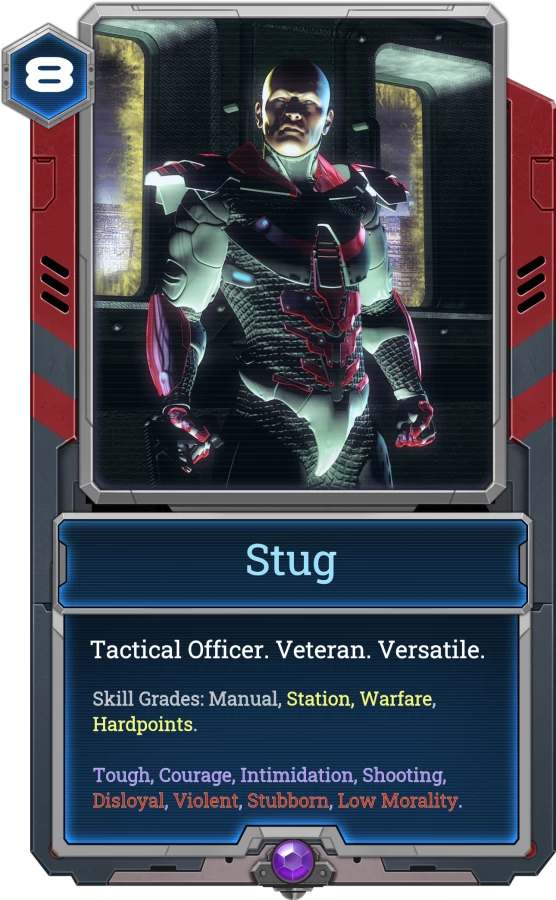 Stug is another epic crew member that can be added to any ships crew. He serves as tactical officer, so much like the first officer he's probably the only tactical officer you are allowed to use. Stug has a quality level of 8, so he's even more powerful than Shen. This comes at a price though. As you may have already noticed some of his perks are written in red. This is because those are actually negative perks. He's disloyal, violent, stubborn and has a low morality. In short, he's going to be your best friend and a force to be reckoned with as long as you do what he expects you to do. But as soon as you order him to do something he just doesn't feel like he's probably going to do what ever he wants. That may or may not include beating up your crew or blasting off your own star ship.

In my opinion those negative traits are a really cool thing to have. In EXODE power is often coming at a price. This allows for some interesting decision making. Do I use a tactical officer that's loyal to me, follows my every order but isn't particularly good at what he's doing or do I want the best man for the job even if it means I'll have to keep an eye on him all the time? Considering the fact that you can run all criminal crews this is bound to play out completely different than playing with a disciplined military crew.

Without knowing exactly how those cards are going to interact with the game and each other there's already a pattern to be seen. EXODE is going to be a lot more complex than most if not all other blockchain games currently released. We'll have to wait and see how this is all going to play out in the end. Complexity is good and important for the longevity of a game but there's a sweet spot to be hit. If the game becomes too complex it stops being fun. The good thing is that this complexity is limited by the size of your ship. While eventually there will be dozens if not hundreds of different traits to be seen there are always only so many spots on your ship. This way you'll be able to choose from a wide array of characters without making it too complex in the actual game.

What really caught my eye though is the quality of the artworks used. I love how Shen and Stug have a very different look but are consistent with each other. Most other blockchain games don't even come close to the quality of those images. Personally, I'm really looking forward to the coming months. The games developer is very active and releases new content daily. He's also very active on the games Discord. This is going to be a fun ride and I'm looking forward to being part of it.

As of now the game is free to try but once the first blockchain assets are integrated you'll need to have an origin card in order to play the game. Those origins are currently sold at 8$ each and they'll be the only thing you need in order to play the game. If you join the game using a referral link both the referrer and you will gain and additional 2 booster packs which are sold at 2$ each currently. These packs each contain 5 random cards like the ones shown above. Since I really believe in the game and want to aid it's development I'm doing a little referral incentive program: If you join using my Referral Link and tell me your Hive account afterwards I'll send you an additional booster pack.

As always, thank you all for reading and let me know what you think of EXODE in the comments.

yeah, with 99% fo those original arts being bought from stocks.
https://graphicriver.net/item/alpha-to-echo-scifi-card-bundle/22480253

I love the potential of this game.

You are correct, it came a long way in a month. The amount of development being done is excellent.

It is great to see the promotion from the community. Some of the videos and artwork being done is incredible.

@taskmaster4450 I love the potential as well!

Between the collectible card aspect, the colony building, the strategy/action gameplay, the Exofuel token as ship fuel (and I think other purposes) is in my opinion quite phenomenal and makes the game very well rounded.

I think that this game sort of 'bridges the gap' between several types of gameplay and perhaps will become a 'template' for other games in the future.

@elindos has been very responsive to community feedback and has been promptly helpful with folks having issues or finding bugs. I think that the level of open communication I have witnessed is commendable.

I'm actually holding off playing for a little while until we can use our own cards and it's a little more stable.

Understandable. I'm not playing much myself so far as there's just too much missing. The current build is more a showcase of what's to come than an actual game :-)

I tried out the alpha so that I wouldn't be completely lost in terms of how to play. I failed the first time haha. Can't wait until we can use our own starters.

Hey Im joining Exode and would gladly use your link for the promo! Nice poat btw

I'd be glad to have you :-) Just let me know once you've made your purchase and I'll send you your booster!